Baymule said:
I hope y’all get good prices for your lambs. You are right to sell now, no sense in putting more money in them.
Click to expand...

That's sort of what we figured. As tempting as it to think just a little longer and you can sell for more, thats a slippery slope we have fallen down a few times. If we want to go commercial we have to have the date set and follow it even if prices might change for the better. The loose plan for the commercial flock is selling at 4-5 months or 105lbs. The 5 lbs is because they usually loose weight in shipping. We also want to mix in polypay for off-season breeding and multiple births. In a few years if things work out we will add in hair sheep, as ultimately we want to have 100% hair sheep but not sure the commercial market here.

The new heifer calf is being delivered this evening, DH tried to pick her up last night but the owner was playing euchre and didnt want to quit to go home and load the calf.

The chicken pickup got delayed a day so DH brought the new chickens home last night. Lots of them but honestly they look good for older chickens raised in a smaller yard. Biggest problem for us is....will our planned chicken fence/yard be big enough with the new additions. The planned yard is suppose to be something close to 40ftx40ft for the yard which supposedly handles 160 chickens but the yard they had at their old place is 36x20 which should also have been plenty but it was nothing but bare dirt...which we dont want! The chicken yard is in the orchard....we want grass there.

We have approximately 75 chickens meaning our new 10x12 shed/chicken coop is a bit small. So going the have to do something a bit creative or give the silkies a separate coop/yard. Not sure what to do as I know we will lose some of the new birds but while they are here they need housing. ATM all the chickens are closed in the 2-story for a week until the new ones accept it and the pecking order is figured out. I believe we are going to build eggboxes on the outside of the coop which will help some with coop space as the inside will only be roosts, food is also going outside under a little shelter until winter. We shall see how things work out.

We are cutting our hay next week which works out well since DH and I have the 5th off paid so we can take a trailer load of hay to the auction. The best year from that field was 1200+ bales in a single cut....this year should be lower. We need just under 500 bales for fall/winter/spring...to be safe. So we plan to sell 400-500 bales, we can do more later if we get a second cut. Average current price we would make around $2,600 which will help cover hay making costs, the new rake tires and the wheel hub, as well as any other parts anything else needs, plus twine, gas, broken teeth/shear pins, and cost of buying and hauling equipment. IF it works that means we will be starting on a clear slate for next hay season for costs. 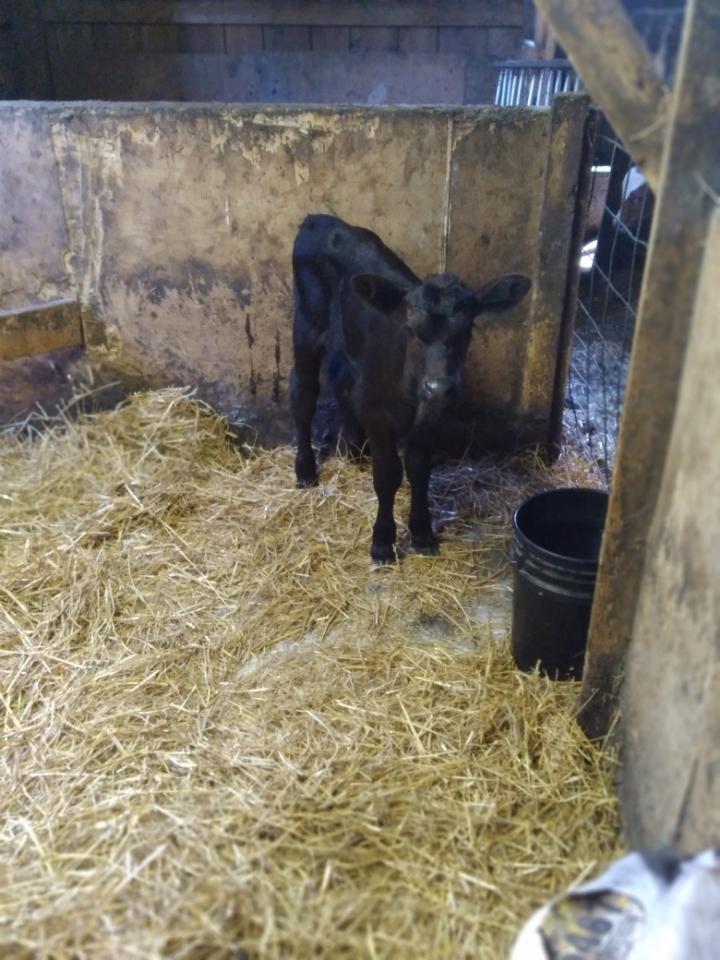 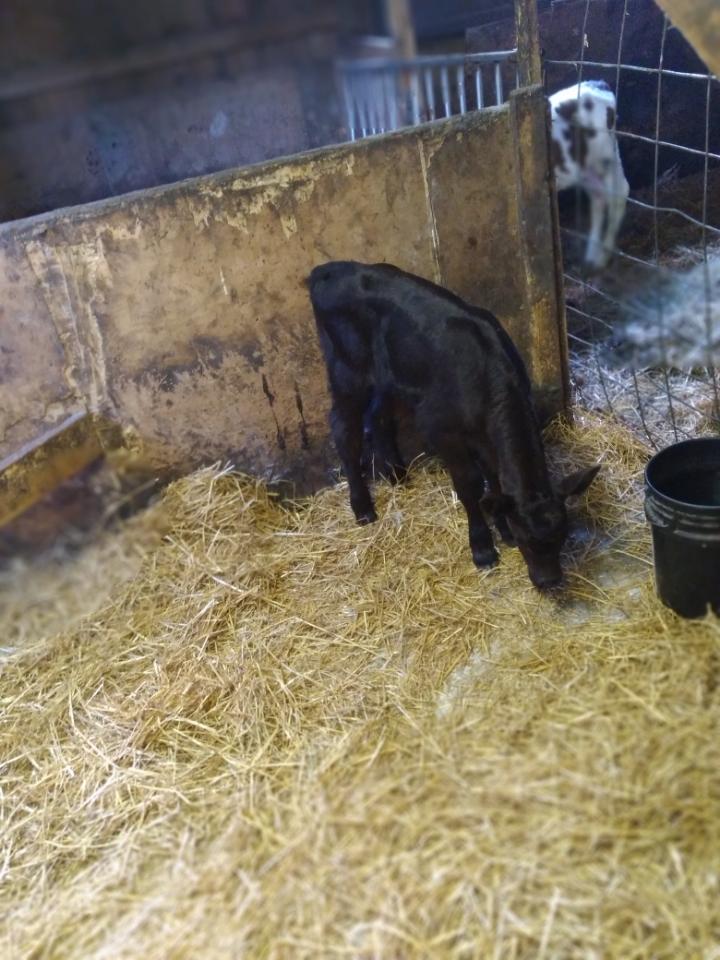 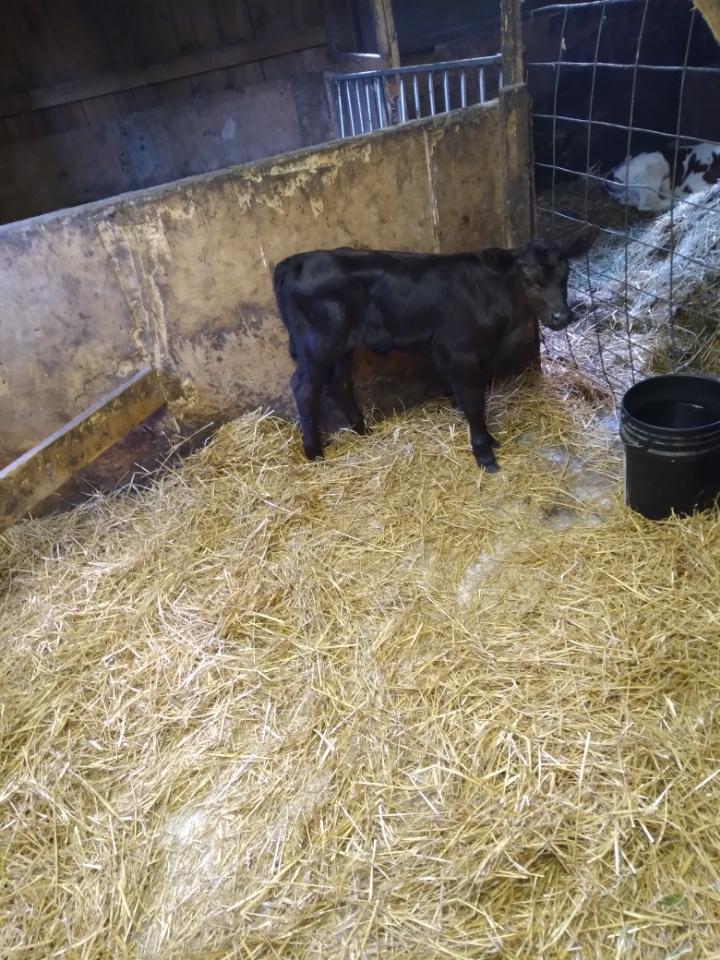 She is gorgeous! She is a little wild thing and it is my job to tame her down as well as halter break and lead break her. She is 8 days old and as big as the diary bull calves who are almost a month old. She is also already eating hay and bottle broke. When the time comes, she will be AI'ed and I can't wait.

She is gorgeous! Future calves coming! Beautiful calf, she will make a lovely cow for you. What is her name?

Baymule said:
She is gorgeous! Future calves coming! Beautiful calf, she will make a lovely cow for you. What is her name?
Click to expand...

She came pre-named Peanut. I have no idea why, but I don't think DH wants to change it. I would rather call her something like violet lol.

Only if she turns purple!

Bruce said:
Only if she turns purple!
Click to expand...

I just ment something more feminine

Hopefully this weekend all the new calves will start halter/lead training. I want to easily be able to move them, we missed the boat on that with the older two and being over 500lbs each I'm not trying to teach them now.

We are thinking we are going to put up an electric fence pasture in the back clearing to put the cows/calves on for this year until we can get our other pastures up. There is some forage stock piled there but the clearing is only 1/2 acre so we dont think it will last long but it is fresh ground, bigger then the dry lot they are sharing with the sheep and already cleared. The entire dry lot is a little less then 1/8 acre and currently has a strip split off of it for the lambs. Until this year it hasnt been a problem because they were only on it when it is frozen/winter.

The goats almost have their entire pasture cleared including brush knocked down and tops eaten. By comparison the last pictures I posted look lush. You can see all the way thru to the other fence line no matter where you stand.

So as soon as hay is done.....pasture 2 is getting put up so the sheep can move. Then as soon as that is done pasture 3 goes up for the sheep to move to and goats will go in pasture 2. By the time they finish with those pastures, pasture 1 should be good to graze again. Aka we should have time to clear out everything the goats knocked down and plant it. The pasture is only going to get about 45-60 days to grow before stock but you have to start some place.

It takes time and work to establish a good pasture. You are right, you gotta start somewhere. Take pictures and start a pasture thread. Then it’s not lost in hundreds of pages of journal. It will be easier to go back to see where you started. When I start feeling like I’m NEVER going to have good pasture, I just go to my pasture thread and start at post #1. It sure makes me feel better!

Baymule said:
It takes time and work to establish a good pasture. You are right, you gotta start somewhere. Take pictures and start a pasture thread. Then it’s not lost in hundreds of pages of journal. It will be easier to go back to see where you started. When I start feeling like I’m NEVER going to have good pasture, I just go to my pasture thread and start at post #1. It sure makes me feel better!
Click to expand...

I walked the Bahia I planted last spring, it’s in its second year now. Last year I very lightly let the horses graze it several times. It was bush hogged a week ago and is growing well. I can go to my pasture thread, look at it after we had it forestry mulched, raked up, bare dirt, and see where it is now. If we get some rain, I’ll let the horses graze it. It’s dry and with the loose sand, horse hooves will dig holes.
You must log in or register to reply here.
Share:
Reddit Pinterest Tumblr WhatsApp Email Share Link