You got it right the first time, @Senile_Texas_Aggie . Our first kid has an inborn desire to stop and think and make sure things are not too messy and are a good idea despite his higher energy level and our second one throws caution to the wind at the slightest provocation and yesterday shut himself in the laundry room and quietly spun himself around and around in the washer for a good five minutes while we searched for him (washer door open, not running)-and that's a big deal because I usually have an eye on that kid at all times. I think he'll probably be a little less dangerous when covid ends and he can go to kindergarten and watch other kids and see they're not all racoons. Dan is also wicked smart, but needs more physical common sense when it comes to application. Things seem to work better in his five year old head than they do when he puts them into practice in reality, mainly safety-wise. He's five. He should grow out of it hopefully.

The beach seemed like a good idea because "taking it easy at home" with these guys is just as stressful (and sometimes more) than taking them to a place that they can use their energy and explore. They DID go to bed, right on time too and Aiden didn't get up until 4:30 instead of 3. I think he needed more beach time, lol.

Sunday is goat day, so I did an attempt at braised goat shank and deboned it for the kids. After deboning and hiding the carrots it looked like this. 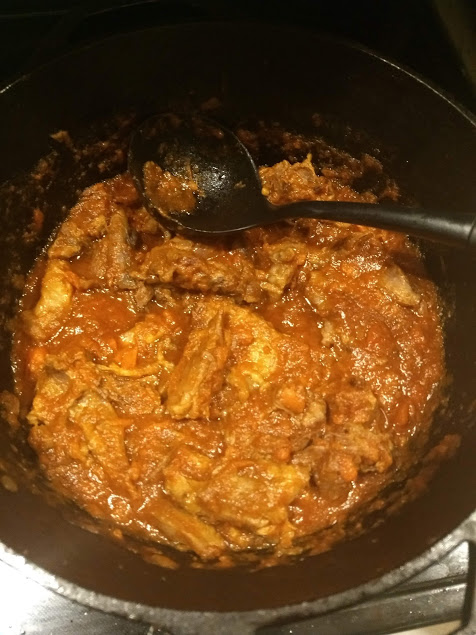 And here's dinner waiting for people. I made a lot of meat and rice so we'll probably have it for tomorrow too. I tried to get nice lettuce to get the kids to eat it last shopping. I think it's great! The kids saved me lots. Luckily I hid those carrots decently well. They thickened the sauce/gravy too. Apparently carrots are starchy. And yep, my does are dry now, so the cow milk has come back. I wanted to give them a break after the coccidia issue we had. 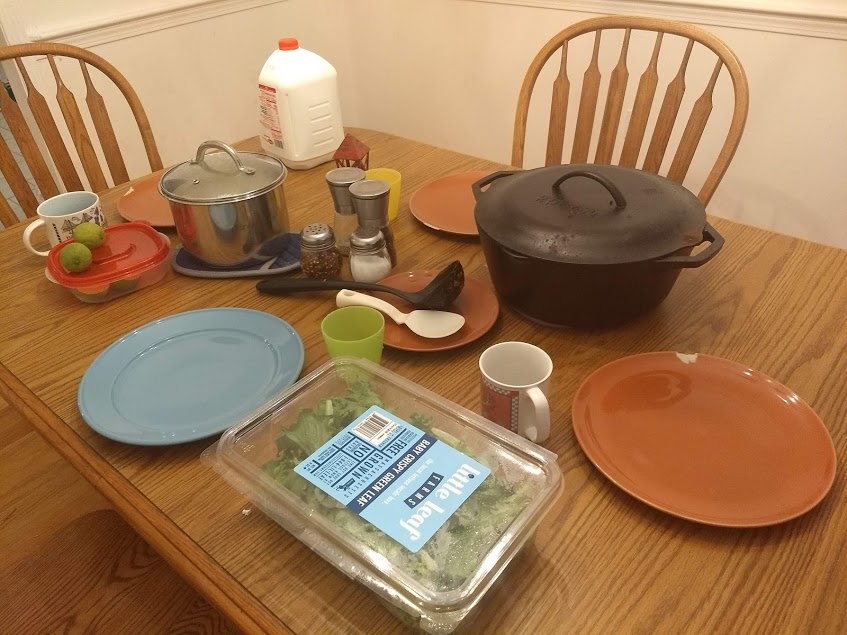 And as a sort of related side note, apparently there are bears VERY nearby over the NH border killing and eating goats in at least two different locations this weekend (???who declared buffet?), so I drove the bucks into their little barn pen from their own pen so Bailey can guard them better. The baby bucks who are living in the barn pen are NOT happy about this, but I don't want my bucks eaten. NH is going after the bears. If it happened in Mass I doubt they would do anything so I need to try to cover my own bases the best that I can.
Word on the street is that guns don't work, dogs don't work, only electric is working, which is just greattttt. I think hibernation is supposed to start at the latest mid December (assuming they don't skip this year like they supposedly have before?). The bucks will be spending the nights at the barn until then, I guess.

Time to stand train the lamancha bucklings while they're up here, I guess. Pffft.
Last edited: Oct 18, 2020
F

One of my dairy farmers had a neighbor get a black bear the other day....bow season is in.... 250 lbs so good sized. I like wildlife in general, but there are just too many now that are too close to the general population of people.... and we keep encroaching on their habitat.... and they are getting very adaptable. Hope that you can keep the goats safe.

I'm glad we don't have bears to deal with. Coyotes, bobcats and the occasional cougar, but no bears.

Did buck hooves today. Gave out herbal wormers and replamin to all. Getting back in that routine after letting it slip for a while. Ranked my lamancha bucks by their hoof quality in case I want to sell one and have two and not three. Durango, one of my dwarf bucks, the one I brought up from Michigan, has someone coming to look at him on Saturday and possibly bring him home to be their new breeding buck. I'll have three dwarf bucks and three lamancha bucks then if they want him.

Btw, we are bringing home this to be FF nubian doe to be Saf's replacement on the milk string.

She will come bred to this buck.

I don't know much about nubians, but I would not mind a doeling or two out of that breeding based on how pretty both pedigree are. Nice teats and udder texture on the dry doeling's mother too.

I had the option of getting this doe too, but I held back. Barely. In the name of hay shortage.

Yeah, these goats are a lot like Saffron was. I'm not reaady to be BFF's with them, but I won't mind having one (or if I hadn't held back, having 2) around. Those dang ears though. How am I going to get used to those things?

Good evening!
I ran the bucks out to their pen today. The baby bucks decided they wanted to go too, so all the bucks are out in the buck pen during daylight.

The does got brought up to the front pen to strip it clean of anything that grew in the last few weeks. It wasn't much, but it's something to keep them busy and get some nutrition and enjoyment out of.

Max, one of the lamancha bucklings got separated from his "mommy" Buggy (buck) so he ran around the yard in a tizzy. I bought Max half grown, and his breeder did not waste attention on him so catching him involved bringing "mommy" back out and tying him in the barn in sight and the two of them reuniting.

When putting up the does Ava decided to try to bite me all the way back so she got "knee butted" more than I wish I had to. I put her back up for sale, btw.

Bailey, the LGD meanwhile had to be locked in a stall because she's a food bully-only other animals food, that is. She could care less about her own. It's only good if something else wants it.

And that's life tonight.
...oh, and the Muscovy refused to go in again tonight. Hope my husband has better luck when they realize there's no food out there, no more water with pools dumped. This set of ducks kind of sucks. Grow up or die, I guess.

I forgot to mention I had a lady come to buy a few pekins later last night-a local vet tech. I've decided to scale back for the winter. She raises alpine goats, but only the does and uses them for milk and brush control. Bailey started going off while we were back there and I told her we got coyotes and bears and things so we'll pay attention to the dog and avoid where she's barking. She responded that that was good and by telling me that last year SHE had a bear break into her goat pen and kill and eat one of her goats and she lives 10-20 minutes from here in Lunenburg. Mass Fish and Wildlife's response was to open an "inquiry" (huh?). Meanwhile the bear moved on and is still in her area, lesson learned, goats are tasty and free food, inquiry let go. So yes, no relocation, no real help with their with anything, and most of all she's close enough to neighbors she can't defend her animals even if she did have a gun big enough to kill or be a deterrent to bears. And if you ask me, that's how you train wildlife to become dangerous. I kind of wonder if it was the bear, also in Lunenburg or Fitchburg or something, which are near to each other, that was chasing people around that eventually got relocated to western mass after months of doing so and several close calls. I'm kind of sick of hearing about bears and other wildlife and what officials are willing to stand by and watch. The lady was very resigned to "that's just the way it is" and had given up. It was sad.
She also asked about our coyotes, and she says the one that came after us early last year was most definitely a coy-wolf. Apparently they're darker in color, and that one was coyote colored/patterned, but darker than I expected. He hasn't come back, btw. Someone probably got ticked off at the right time and finally shot him or he moved on.

It's raining today, so all the goats are staying in their barn pens. Not sure this is going to work long term with the bucks. They need more space. They may have to rough it.
I'm starting to feel like my hobbies just dangle meat in front of things I don't want to have around here to endanger my family and I'm expected to let the critters come or just conform like the rest of the suburbanites and give it all up. I should probably scale back on the poultry and prepare to move in the next year or so. The dirt is poor and rocky, the people are anti-child and anti-farm carefully cultivated intentional appearances shoveled aside, and the law is attempting to require me to keep my property a wildlife reserve to invite it and not do anything with my ever land all because we have a drainage ditch designated a wetland running through it and we'd need a lawyer even to start trying to fight it.
Maybe if I move to TN my parents can give me a gun safety/care/firing class I actually am satisfied with and i can dispatch critters like my parents do. The dirt is red clay there, but it's open season on coyotes on your land (and possibly period, I don't remember), so things are kept under control, and nobody has bear issues. I'm not looking forward to the idea of moving though. Moving is lousy. Selling a house is lousy. Buying a house is lousy. (Dh's job might improve though, so maybe worth it.)

Time to go. Better things on the horizon.
M

So why are you in your current location? Raised in area, job location, etc?

Yeah, moving is a major life change for many -- especially if far, not just other side of town. But you may have a talk with DH and see if job elsewhere is an option for him and plan from there. Might be a good time to make a life change.

At my stage, only me to ask and satisfy. There is good and bad with that...