Your journal is great reading!

Aw, thanks. Here's a picture I wanted to get earlier. Here is a nest box full of baby ginger buns. 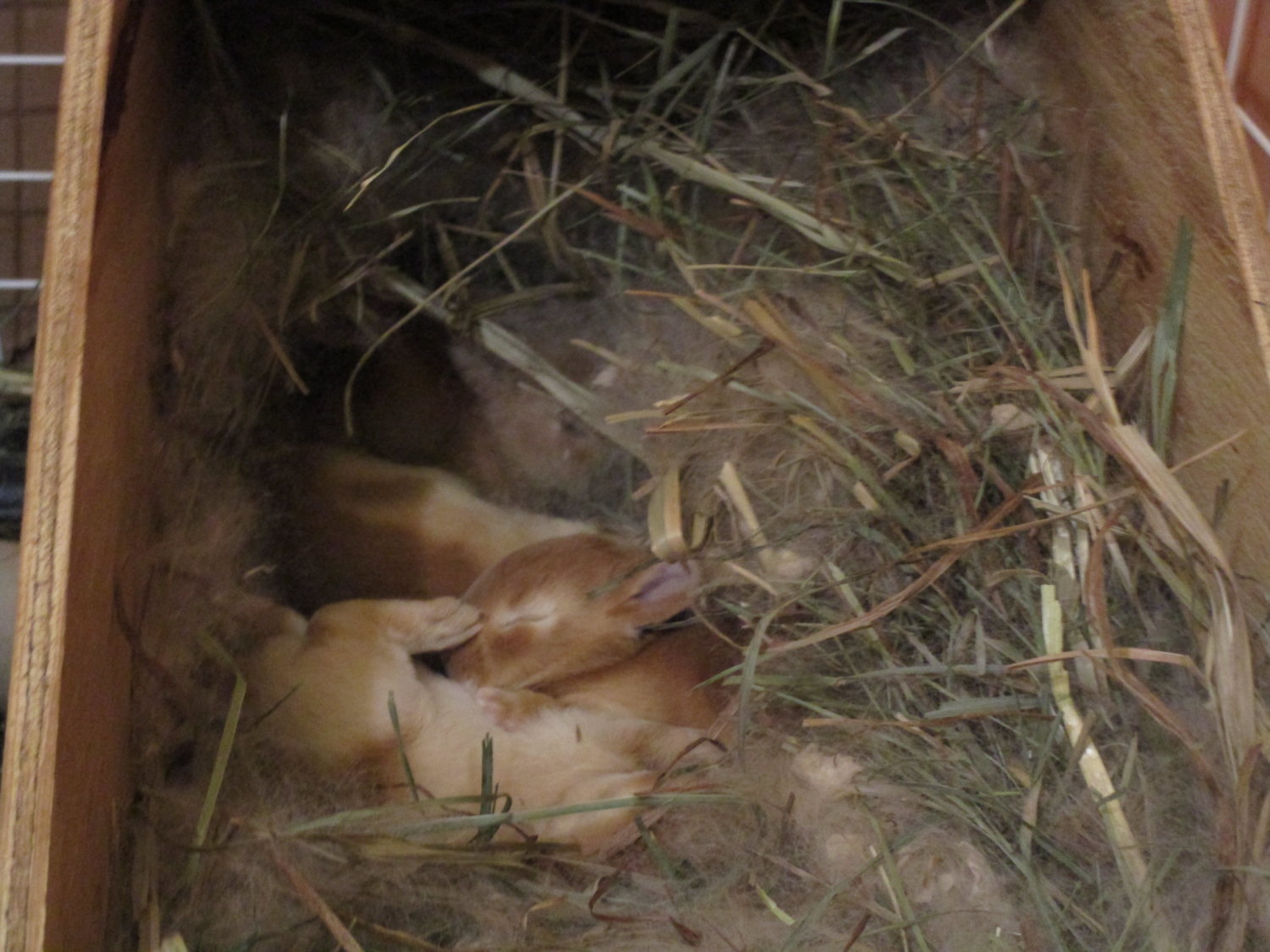 rachels.haven said:
Last year I did about 20 feet of it, which came out to be about a dozen large sumac trees to burn
Click to expand...

Not poison sumac I hope!

Yeah, just get a smaller size chain saw and get it done. You could hack up one of those trees in 10 minutes.


rachels.haven said:
I know it's not BYC, but here's a picture of my favorite rooster I had laying around.
Click to expand...

I figure anything that sounds like a herd is a herd. And when my 17 hens come running, they sound like a herd. More so than the 2 alpacas. But people here on BYH are very accommodating.

@Pastor Dave raises rabbits you might find some of his journal interesting.

Lol, no, not poison sumac, I'd probably know that by now, I've done so much with these trees.

These are just giant weedy sumacs that can grow over my height in one year while sending up clones of themselves via rhizomes in rivers from themselves. I hate them. If I round the small ones up, they die in chains and then I get these white mushrooms all along where the rhizome grows that I have to keep my chickens away from because for some reason they like to take bites out of the caps, and then the eaters get kidney failure symptoms and die. They're probably not a kid safe fungus either (when those mushrooms come out, birds stay in pens, kids stay inside until I get rid of the mushrooms so everyone's safe). Definitely more information than you need to know, but this is a big reason why I really need to get the trees gone. They also try to take over the yard and they're about 20-30 feet tall (probably at about 6-7 years) and the trees are BRITTLE to boot. Kind of dangerous. It's possible the trees are meant to be shorter, but we live in a swamp with a high water table and it encourages certain trees to grow very, very fast with bad structural integrity-weak wood, often diseased from water and pests or both. We've already put down $5K getting bigger trees of a different species removed that grew that way as a result of our swamp last year. (They almost killed me a few times dropping huge, insect infested, waterlogged, packing foam textured still living branches at random following storms, VERY SCARY.)

Supposedly goats like sumac leaves and wild grapes, and wild raspberries, and buckthorn vines. That's basically what plants I need to remove all over my acre. I probably need an army of flying goats that won't touch mushrooms to conqure it all...and a chainsaw. Lol.

I like rabbit pictures better in the winter though. Too cold for me to do stuff.

Kids and husband sick today, but here's a quick tree line pic. I wouldn't be surprised if the trees were only 20ft after looking up sumacs in my area on wikipedia. Some of these trees are problematic looking and might require experienced help. 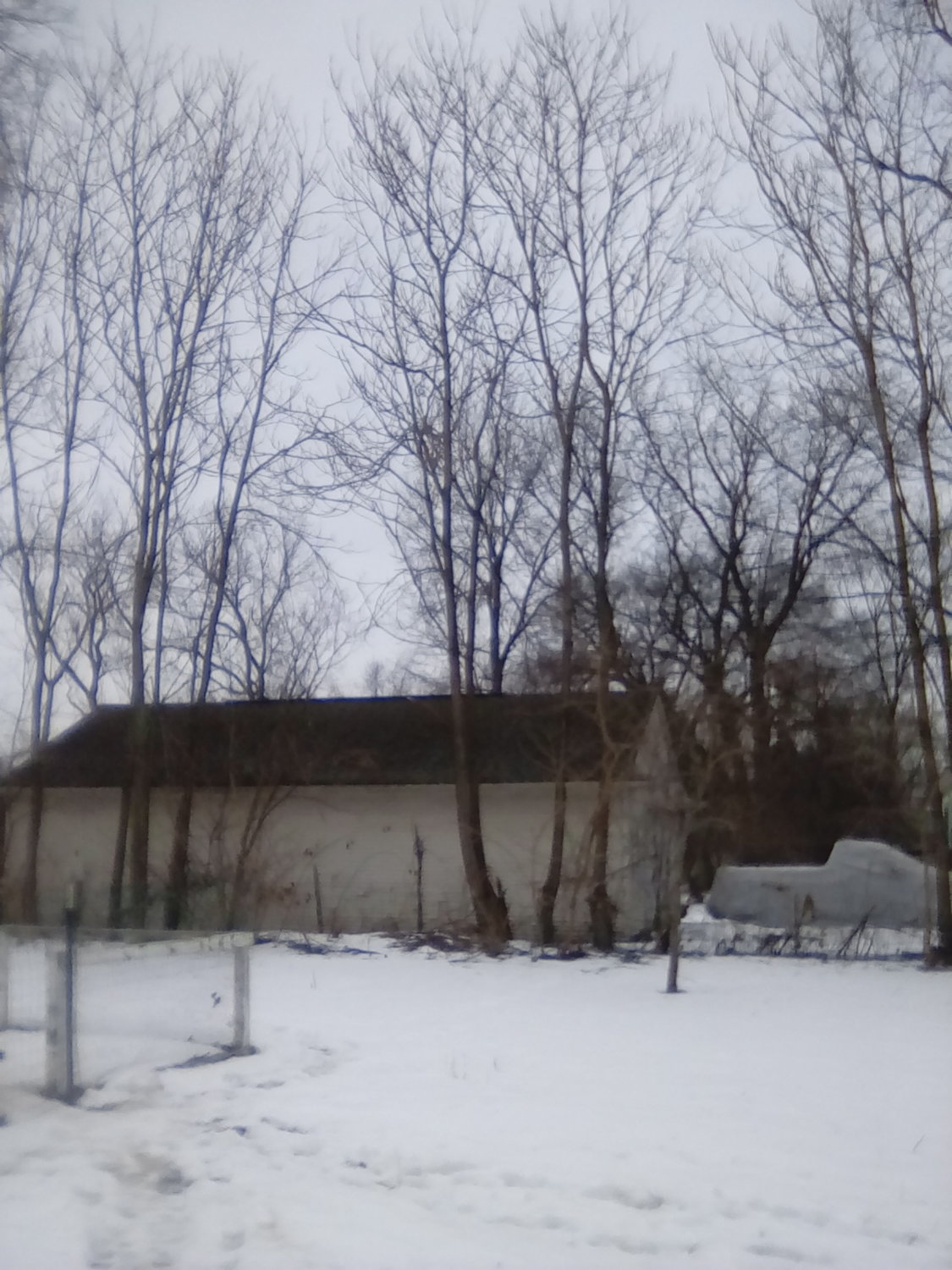 Neighbor truck for scale I guess?

Ummm maybe my eyes are old and not calibrated but those are 40-45 footers...

I like it better when they're shorter. I've already taken out half a dozen, so they're not too bad. The fun part is how if you cut them right, they fall exactly the way you want them to (although you shouldn't count on it).

It's possible they're something called "stinking sumac" or "tree of heaven" which would be ironic but I'd rather not. Ailanthus altissima are very invasive and get up to 70 feet tall. They'd fit right in with all the other invasives I've found in this yard but I really, really don't want them to eventually be 70 feet tall brittle, randomly dying, nasty looking, droopy, weed trees, so if anyone asks, they're 20 feet.

Actually reading the stinking sumac page on wikipedia sounds right on. Oh dear, we might need a tree service and a lot of round up after that. Oh man, I'm probably going to war with a tree someone made wikipedia say was nicknamed "tree of h311". This might be fun.

I'm sure it was right at home with "one of the world's worst... ornamental trees that does not deserve to be planted anywhere" that cost us so much last summer. This spring needs to hurry up so I can work outside again and get moving.

I am actually guessing more like 60'. I figure about 15' of the truck is showing and used that. But we can go with Rachel's 20 number (just happens to be in meters).

You can tie a rope up in the tree and tension it the direction you want it to fall to be more sure it goes where you want. Wouldn't want it to land on the fenced area. But depending on what is within the fall area, you might want a tree service since they will take it down from the top rather than dropping it all at once from the bottom. BUT if there is nothing for them to hit, they are pretty small in diameter, something you should be able to easily drop with a 16" bar chainsaw.

Pretty rabbits! Welcome to the forum from Texas!

Thanks! They feel like them too. I'm so shocked I was able to wind up with them, they're so nice.
We will probably do just that with the trees, especially the ones near my garden and bird pen and bird shed, and the couple that lean towards the neighbor's truck (...so, all of them, I guess). Normally I just cut a wedge in the direction I want it to fall and cut through from the back and the thing falls and I cut it up. I'd like some tension applied too as extra insurance. Alternately, I may work on my argument for another huge expense and not do anything. We'll see.