You just can't catch a break! I think you need the metal rim wheels like on the really antique tractors because I'm sure if there is one locust thorn out there, it has friends. Thankfully we don't have those here but I've seen pictures and I sure wouldn't want to tangle with them!

I should pay attention to your post even though I can't help you. I've only used my IR 1/2" impact to take lug nuts off car tires to do the seasonal swap. Never thought about having to oil it! Hopefully it didn't need an initial oil fill, I've definitely not used it 8 hours yet even though I've had it about 3 years. Don't know if I got an owner's manual or not. Yeah, I'm maybe not the most organized person.


I thought I would post some of the work I have managed to get done, and some of the obstacles along the way. I think I am finally caught up with everything that got neglected from the time my old tractor died until I got the new one earlier this month. Most of the work was for the overgrown area located at the southern end of our place, as shown in this picture. (I will reference the letters later in the text.) The work included mowing, picking up cut trees, brush and limbs that I had cut in mid-March through early April, and burning that brush. 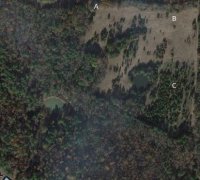 Miss @farmerjan, I hope you have taken your antacid before you look at these pictures -- I know this pasture doesn't look nearly as nice as what one would look like if you did it, but it looks better than before I started, which was knee-high to waist-high grass and weeds.

Point B looking south, with the burn pile area in the foreground:

The first burn pile was probably 30' in diameter by 6-7' high (as high as my FEL/grapple could lift) before I set it ablaze. I burned 3 smaller piles in addition to the big one, as I picked up groups of trees in area C and then moved them to the burn pile.

Point C indicates a broader area, where small trees, shrubs and bushes have grown up. This is where I have been doing most of the breaking of shear pins.

Examples of the shrubs and brush in the area around point C:

Pictures of shear pin hazards. Each picture represents where I broke a shear pin. Realize that at the time I was mowing, the grass was knee-high or taller.

Tractor ruts near point A:

The remaining pictures are from area around point C. Hump in ground which I scalped:

Groove worn in shaft of mower by shear pins breaking:

In the next post, I will be seeking your inputs on what I should do with this overgrown area.

Now for your inputs for what I should do with this overgrown area.

Let me describe the overgrown area. The area is a mixture of fully mature trees, which are the wooded areas in the picture. Many years ago, most of the area was pasture. But years of neglect by previous owners allowed a lot of bushes and trees and corresponding briars to grow up in the pastures. (They did not have livestock to keep the areas eaten down.) Now those bushes and trees are 10+ years old.

When we first bought the place 2+ years ago, I decided that I would cut back on some of the growth and keep the grass mowed. Later I decided to try to cut down or thin out the trees and bushes in the area (area C in the picture in a previous post). But now that I can no longer use that approach as easily I could previously (due to breaking shear pins), I am beginning to rethink what I should do.

The eastern boundary runs north/south and borders Arkansas Game and Fish commission land. The fence between the properties is in bad shape and would not keep in livestock. The boundary that runs through the woods northwest/southeast has no fence at all. There is a ridge that runs northwest/southeast whose water drains into this property. The pastures are frequently wet in numerous places in the spring, as the water runs across the pastures more or less to the east. Thus I am not sure how well the land could be used for haying. I would have to talk to someone about what it would take to turn it into a hay making area.

I am also considering planting trees. (Miss @frustratedearthmother suggested that when I asked what I should do with 100 acres of pasture when I first joined the forum -- see https://www.backyardherds.com/threads/what-do-i-do-with-100-acres-of-pasture.38064/post-555958). My problem is that I know nothing about what programs are available for assistance in planting trees or what the advantages are, etc.

I suppose that I could raise livestock there. The problems there are that I currently have no fences to speak of, and I have never raised livestock in my life. If I were to try any livestock it would probably be sheep or goats. But I would probably end up killing them in the first few months due to pure ignorance.

Thanks in advance for your responses.

Talk to the guys at the Fish and Game and ask who would you need to see about getting some of the land planted in trees... They ought to know who to at least send you to. And the extension service should be able to help. Go online and see what you can come up with.
It it is frequently wet, hay would be iffy.

I think maybe getting trees established would be your best bet. I know that you are honest enough to know that you are not a "livestock farmer" by nature....
If hardwoods would do okay, then it would give you a chance to get the farm into "land use" of some sort as tree farming is allowed.... at least here. Give you a break on your taxes.
Don't know if they grow them there, but pines are popular here, grown alot in eastern Va and NC.... harvested in like 20 + years....mostly yellow pine as they are fast growing; might give you an income down the road from that. They clear cut and it is not pretty when they do, but the trees will be planted and grow and there is very little "maintenance" to them. Hardwoods you will not see harvested in your lifetime probably....but better than growing up willy nilly to scrub brush, and whatever takes hold.
F

By the way, your bush hogging looks better than mine as our grass/pastures were way too tall and alot is laying on the ground. It will incorporate back into the soil but for a couple of weeks it looks pretty crappy to me.

I think you just need a larger, stronger bush hog for that size tractor.

If you have anyone that is willing to put cattle on that pasture, you could arrange for them to put up a hot wire and run the cattle in for feeding up. The grass looks good. You would not have to do anything with the cattle since the owner would be just renting pasture from you, and would take care of his cows/steers himself. If the cattle owner has to put in the fencing maybe he could do that in return for the first year or two rent. That would also put you into the farm category as far as taxes I think. I am not sure if planting trees would require some sort of fencing to protect them from deer and wild hogs. Also irrigation of some sort?

That idea sounds great. Renting out the land or trade the land for a butchered steer? It would be a win, win for both parties

I think I will look into seeing if I can find someone interested in the area for raising cattle. Thanks for the ideas.

I am specifically calling you out in this post to make you aware of my having Asperger Syndrome and how that affects my wording and behavior at times. I was reminded of my condition when I mentioned it on Miss @Ridgetop's journal in this post: https://www.backyardherds.com/threads/ridgetop-our-place-and-how-we-muddle-along.38119/post-657313.

You folks joined the forum since I last described it in detail on my journal (located at https://www.backyardherds.com/threa...-relief-for-the-rest-of-you.38161/post-622357). I posted that description because I had posted some quite (unintentionally) intrusive questions on other folks' journals. Fortunately, someone on the forum kindly contacted me to point out how rude I was being. (To the person who kindly contacted me, I again say "Thank you".) Recently I even asked such a question of you, Miss @thistlebloom, when I asked about the name of a lake that appeared in a picture you posted. Fortunately, you did not take offense and even made a joke about not wanting folks from Texas coming for a visit!