How many joules do you think it would take to keep her off the fence?
F

I have never owned a $700 charger.... but it needs to be a plug in type that will give her a jolt. The solar ones have to grounded exceptionally well, and I have not always gotten ours grounded good enough. I don't know the joules, but we have 2 that are relatively inexpensive....plug in chargers cost much less than solar ones, and they will keep our mature bulls in with no problem. If it isn't on, then they will tear down fence like it wasn't even there. The solar chargers just didn't cut it. But the plug in stopped it quick. The solar ones also have "pulses" and they animals seem to know it. The plug in ones don't seem to work the same way. I hate electric fence in general. We have constant problems with deer tearing them down and it takes alot of time to walk them. This time of year is a nightmare with the does starting to come into season and the bucks are coming into rut and traveling and acting like "bucks in rut"... they don't learn the fences usually because they don't travel the same area everyday.

This was my strongest energizer, which she ignored. 3× 6ft ground posts, always reads full zap anywhere unless something grounds it out.

I touched it once, never made that mistake again. But lightening killed it, so I got the 30 model, as I didn't have enough $ for the 50. Two more lightening breaks & I got the solar.
I could get an even stronger one to plug in again & baby it obsessively, but I don't want to waste any more money on this problem.
F

I don't blame you for not wanting to continue to deal with her. And I got to thinking, she may not feel it. I remember a friends' dad , used to be able to grab onto a hot electric fence and then invite us to touch him. Not knowing any better, we would touch his hand and get a jolt that would really set you back. He didn't wear rubber boots either. Something in his body would "ground him" and he never would feel the jolt. He obviously took care of all their electric fences on the dairy farm. So maybe something in her system makes it not affect her in that way. In that case anything you do would be futile as you have found out.
I hope that the people that looked at her like her enough to buy her and let you get on with your other animals.
The pad for the building looks nice and I hope that the drainage situation is fixed. It has been rather wet for a good part of this fall after the hot dry July we had. Hard to get things done when you go from one to the other.

I don't usually post the stuff before success, so here's today intro to daisy reins...and reintroducing the surcingle, again, for the millionth time. Like many things, she's reactive and bolty. And if I don't continue using that scary thing, daily, she will need to be reintroduced again and again and again and...well, you get it.
Sure, some of you may think she's bored with my antics, but that's not actually true. Or at least not fully true. I can see why you think that because I only show you the good, calm moments. She escapes out because she refuses to live on a hay only diet, that's what started it. She escapes inwards because she is obsessed with her friends. She used to be dangerously attached to them, in hand, too. It's not because she is bored or because she has a feral family tree or w/e else telling her to roam the countryside. If she did, I'd expect her to of been roadkill by now or something. She doesn't run n frolic when she's out alone nor when everyone else is with her, she doesn't even pace. She just wants things on her terms. We both figured out early on how to deal with each other, I won't force her into a corner and in return, she won't blow up and instead tries to deal with my crap.

Actually, here's the tarp video. You'll have to excuse my expressions, mumbling & outfits...

And the mat & pineapple video.

Today's video, fine with the tool, not fine with surcingle. Idk if you can tell, since you can't see her head the whole time, but she's being careful & responsive about the reins. That's the first thing I noticed. I already know she's very sensitive & responsive, but I was worried about possible rearing. And I'll keep worrying about that until after I see she's okay with not being able to stretch down whenever she wants. It seems the length its set as may work for her, time will tell. Rained last night, so not the best time to do it, but that's why we didn't keep at it nor try to canter. Hopefully, it'll be more dry later tonight & I can toss on the saddle tree & later the reins again & see how we feel. She likes stretching down when trotting, so that's when we may run into issues. And that's what I'm working up to seeing.

Made a browband for her halter, to keep the daisy reins in proper place. Need to test fit it before sewing the other end closed tomorrow morning.

Too loose the first time, as you can tell by her fun little fit. 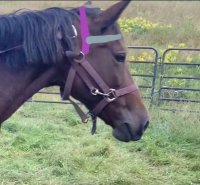 She's listening to them very well...Makes me want to close up a small circle, toss on my gear & give it a shot. Certainly not getting any younger or more limber...

secuono said:
Makes me want to close up a small circle, toss on my gear & give it a shot. Certainly not getting any younger or more limber...
Click to expand...

Right, that is why you have to do it now before you get older and less limber!

Seems like she's doing really well, compare these videos to those from when you hadn't had her long. Though I will say that I'm pretty sure the thought bubble over her head often says "What ARE you thinking woman?"
You must log in or register to reply here.
Share:
Reddit Pinterest Tumblr WhatsApp Email Share Link