My friend's sheep love bananas and will do anything for them whereas our two sheeples don't care for bananas. They will, however, mob anyone or anything to get an avocado. Which isn't supposed to be good for them, but the shepherdess we got the sheeples from said her sheep have been in a pasture with an avocado tree for generations with no dire results, so maybe avocados aren't as vile to sheep as the internet thinks?

We were giving them alfalfa pellets fairly heavily laced with rolled barley for their morning and evening 'snack' (it's only a quarter to a third of a can of pellets). However, after awhile, they were laying down instead of running down for their snacks and being lethargic. I quit adding the barley and they've been on only alfalfa pellets for a week now and have perked back up. The shepherdess said they really shouldn't have much grain at all.

Even just the alfalfa pellets are enough to get them excited about snacks. They 'baaaahh' in the mornings and evenings until they get their several mouthfuls of alfalfa pellets, then they're happy. They also get pets, scratches and there's much tail wagging. They also seem to think grass that is handfed to them is better than grass they have to pick themselves. Ti leaves are a good sheep snack, although why being handed one is better than picking one themselves is beyond me.

It might be more the learned habits, more so than the actual snack itself that gets them friendly? But, it should be s healthy for the sheep snack or they can get sick.

I don't know how true it is and I haven't tried it, but I read somewhere that avocado peelings are a good wormer.

Really?!! That would be so kewl if it were true! It would be the easiest worming ever. These sheeples will attack for avocados and we've got tons of them right now. 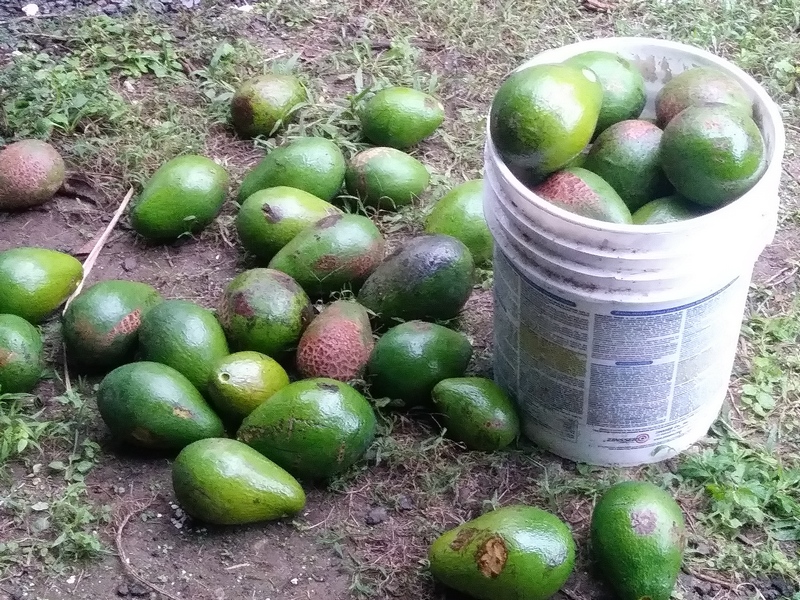 We can only eat so much guacamole and with that stupid virus around, we're not out and about so how can we give them all away?

Avocados are $1 each here for big ones! You have a tree and they are sheep treats! Can I come be one of your sheep?

Sometimes avos are $3 and $4 here. Each.
I snap them up and hoard them when they are under a dollar. Sometimes it's a limit of 2 per customer, but I don't mind walking out to the truck and back to buy more.
K

Our sheep raided our compost pile to eat citrus peels. We juiced four 5 gallon buckets of tangerine and lemons and threw them on the compost pile. Our seven sheep discovered them and over the next few days ate almost every peel. Ours also love avocado leaves and avocados. I read some research done by someone with a reputable university, and what avocados are supposed to do to sheep I can’t remember, but it sounded horrible. We saw no I’ll effects though, and our sheep (when I wasn’t looking) would knock down the 2x4 supports I had on the low hanging branches so they could eat the leaves. And I’m pretty sure when all the avos that had fallen to the ground were eaten, they climbed on each other’s backs to pick more.

Citrus peels! Really? I have never offered them to my sheep. We don't have any citrus trees, just the occasional lemon, lime or oranges. I'll have to try and see if the sheep like citrus.

We'd love to have you help eat avocados, Baymule. We can't get rid of them fast enough this year because of that wretched virus. Usually we take them to any social group that we know of, but this year, there's no groups. So what are we supposed to do with all these avocados? Tossing them into the compost pile just encourages them to sprout, there's already the ginormous avo tree with three or four sizable but still smaller friends. I don't think the sheep are supposed to eat that many, I know the rabbits aren't supposed to and the chickens can't eat that many since they can barely finish one, let alone a pile of them.

Hmm, feeding avos to dogs makes the dogs fat and shiny, do you think it will make the wool shiny? That would be nice!

I'll try feeding tangerines to the sheep, maybe they'd like those? I gave the last box of them to the neighbors and one neighbor - who is usually good with taking a lot of them - said someone had mailed a gift box of citrus to them from the mainland. What's with that? The stuff is falling off trees around here and someone mails in a box of them? If the sheep don't like citrus, the bunnies do. Even grapefruits, which I thought was weird.

We'd box these avos up and ship them away , except about fifteen or twenty years ago they put a law in place that made it illegal. They said it was because of a disease and they wanted them irridated with something before being shipped, but it turned out there never was any disease. From what I've heard, it was some sort of trade deal with some foreign country. We're now allowed to ship out Sharwil avocados and only during certain months when the other country doesn't have avocados to ship. But there's hundreds of varieties of avocados around here so we may as well feed them to the sheep. If it's healthy for them, we could not have to buy sheep feed for a third of the year.
Last edited: Dec 27, 2020

Too many avocadoes !!!!! You DO realize that I don't feel sorry for you?

We had the same problem with too many avos - but then we bought property and moved, and the only fruit trees here are guava and strawberry guava (very invasive). The only avocado variety that can be shipped to the mainland are Sharwil. My understanding is that the California avocado industry somehow got this law created, and it’s based on junk science.
You must log in or register to reply here.
Share:
Reddit Pinterest Tumblr WhatsApp Email Share Link