That is new to me, sounds like I should get some. Might have worked on the headlight leveler sensor on DW's car. Talk about rust, 13 years of road travel. Had to have my local mechanic get it off. I was careful not to strip it since I was pretty sure I was not going to be successful.

I got all the parts to fix my garden tractor mower deck. Got it all put together. I knew a front tire has a slow leak so figured I might as well find that and plug it before testing the mower. Can't plug it, it is a really thin slit on the sidewall so while I can mow if I put air in the tire first every time, I need to ge a new tire.
F

@Bruce why not take it and get a tube put in it? They can put a patch inside on the sidewall to strengthen it a bit, then put a tube in it. We put tubes in tires all the time if the tread is still decent. Since it is not a car on the road, if the leak is a slow one, they ought to be able to "cement" a patch on the inside. On road vehicle tires they won't do.... liability and all and I get that. But a slow leak in a tractor or mower tire ought to be fixable.

I guess it would depend on how much a new tire would cost compared to having it patched and tubed.

Put the bucket on the tractor and moved 3 buckets of 'Paca Poo to the 3 bay compost bins. There is a fairly significant rise going up to the north end of the barn from the pond side. The boys originally started their pile 4 years ago at the south end of the barn and it has been slowly moved to the north end, then uphill to just outside the double doors. Does it surprise anyone that 'Paca Poo doesn't yield great traction??

I dug some of the excavated pond "soil" out of the pile and put it down where I got the 'Paca Poo so I could get up the hill. I also dug out the area between the north end of the pond and the fence. I used to be able to get the garden tractor through there (dicey though) before I dug the pond but when the pile oozed during dredging it went north and west and filled in a section to the fence. Now I can mow around the pond with the real tractor. Of course there is now nothing TO mow on the north end but I suspect the grass and weeds won't take long to grow back.

Had a barn swallow nest (somewhere) fledge. The 5 babies started showing up for fly by feeding 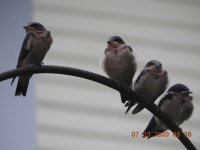 here is #5 sitting on the deck 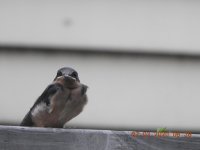 and Christofur enjoying the birds 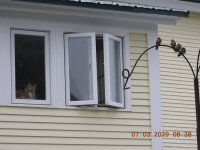 There is another nest of 5 babies just about ready to fledge in the barn alley. Same area as every year since 2012 (first summer we owned the place). They rebuilt the nest from last year then for some reason abandoned that and built a new one on the next joist over.

One of the hens decided to "decorate" her egg. I have made no modification for this picture other than moving the egg from the nest to the basket. 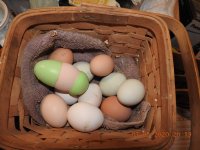 I would love to see an explanation for that modified egg.

That's unique about the egg...

....we have a 2nd hatching of wrens here....the mom is busy all day tending and feeding to this batch...she fledged 4 the 1st time and will have to see how many come out this time.........better to be on the tractor in the "poo" trying to find traction" than standing in it hoping the boots are tall enough....

I think you better stick a nest cam in your coop! That was some creative hen.

What do you do with the alpaca poo? Do you raise a garden? The Sheep poo we put on the garden in January and tilled in is making the garden grow! We recently cleaned it out again and spread on pastures, then got 2 1/2” of rain on it. We never spread it on pastures before, kinda excited to see the results.
You must log in or register to reply here.
Share:
Reddit Pinterest Tumblr WhatsApp Email Share Link