Baymule said:
Get some jam and start enjoying!
Click to expand...

That is what I'm doing for breakfast along with store sausage and eggs from the barn. The sandwich bread is fine if not quite as high as usual. This recipe is especially easy though it uses a full 2 cups of sourdough starter. Knead with the KitchenAid mixer for about 7 minutes. Let rise in a bowl for about an hour, shape into a loaf and put in the pan. Let rise another hour or two until it is about 1" above the top of the pan and bake.

The Champlain is time intensive. Mix everything together the night before. "stretch and fold" every 1/2 hour about 4 times (kinds puts a damper on getting much done outside!). Form into a ball and put in a basket (which I don't have) or a tea towel lined bowl. Let rise an hour or two or .... bake in a preheated dutch oven (which I do now have). I've made it 4 times and not once have I gotten close to what it SHOULD look like!

The twin 6V lantern batteries that run the auto door for the chickens died yesterday. The door lets them out of the coop and into the barn alley every morning. I don't even know how long they have been there, probably at least 3 years; far longer than I would have expected. I'm charging an old 12V from a Prius (they are small since they don't have to crank a starter motor) to see if it will hold a charge. If so it will move to the barn. If not it is off to WallyWorld for 6Vs since I don't know anywhere else to find them.

thistlebloom said:
The neighbors let me drive through the pasture and load up from the community piles. They sure are nosy creatures!
Click to expand...

Mine are not near as friendly as those! Though they do want to see what is going on. And the stupid animals keep thinking it is OK to poop and pee in the barn at night even though they have 24 hour access (they have been excluded the last 2 nights) or just outside the barn door even though I keep shoveling it away expecting they will use where I put it as their pile and dumped about 15 pounds of stall dry on it then covered the area with hay. And when they pee I swear they could fill a 5 gallon bucket.

Something that I do it ride on the tire with very low air or flat until it breaks, but I normally use the handle ends of a couple of crescent wrenches and work it off....I've never cut the valve stem off a tubed tire, and when replacing the tube, only 1 side of tire has to be lifted.....I would think that a auto parts store or batteries plus store could help with the 6v batteries....

Hadn't thought about riding on it flat. So I should have skipped the jumping on it part? They guy did have other good suggestions like the fact that those rims are fairly cheap and can have rough welds or other "pointy" bits inside that need to be filed off. I found several. It WAS a tubeless tire, OEM on the tractor. Easy to get all the air out that way and it has to be cut off at some point.

I don't specifically need 6V batteries, I need 12V but 2 6V lantern batteries in series are a lot cheaper than a 12V tractor or other battery.
Last edited: Jul 17, 2020

Sorry to laugh at your tire and alpaca troubles Bruce, but you shouldn't make it so funny!

Well someone has to laugh with me, right? Only I'm not laughing

Got the car battery hooked up to the auto door. The light turns green saying there is power. The door doesn't do anything. I guess I have to open the controller box and .... well look at it and hope something fixes itself. Oh, and then I tested the paired 6V lantern batteries - 11.7V, they can probably still run the door.

I did make headway on a project today. Sorry no before pictures but I moved the old piece of deck that was in the enclosed area near the north end of the barn, stuck it over behind the little barn and did some stabilization. Let's just say it wasn't very stable where it has been the last 7 years. I got some new posts under it so it is basically level, the far end was already cross braced. I will cross brace the new posts tomorrow and take a picture.

The plan is that it will provide some shade for the girls other than the small tree between the barns. They could go out under the lilac bush behind the little barn but if the alpacas come out, the girls all run back between or into the barn. Hopefully they will be able to get to and from the new shade spot safe from the alpacas.

Chicken shade area finished. I suppose I could put tarps on 3 sides to block the wind when it gets colder. I put a sheet of roofing off the south side to increase the shade area. I know it doesn't look like it but it is level. 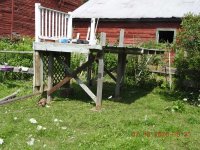 It was over here 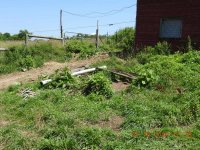 You can see where it was near the north end of the big barn from this Google aerial shot. It is now behind and perpendicular to the little barn

Apparently I have "inherited" another effing woodchuck. I was in the workshop in the north end of the barn and heard a lot of rustling in the other end. I opened the door closest to that end and looked over into what was originally the hay mow many many decades ago. Saw something dark (in the mostly dark) scuttle into a woodchuck hole dug several years ago. I went and got the Havahart and got squeaked/whistled at from the hole

Will check in the AM.

I think I have the chicken door working. The 12V car battery wasn't cutting it and only held 11.7V. So I went to Wallyworld today and got 2 more 6V lantern batteries. I debated getting the expensive ($7.50) 3X ones but went with the pair of (I guess 1X) for $6.75. Figured if the unit was shot I didn't want to have a lot of money in batteries I don't need.

Well the door didn't work though the battery status light did briefly come on green. So I got down on my knees with two 2 thin wires and put power right on the motor terminals and the door moved. I ended up having to do that a couple more times then the door seemed to work as designed with the magnet. I'll check at close up time and the real test will be if the chickens meet me at the barn door (and maybe a few up at the gate) in the morning.

I'm sure there is a purpose for the woodchucks but I'm not sure what it is. I took one out a couple of days ago and I found a carcass out in one of the paddocks that evidently the dogs had killed. That explains why they didn't eat their dog food that day.

.....I detest electrical issues, sometimes tracking them down will drive ya nuts....tho, if the wires got it working, it has to be the wires or some switch in the circuit...
You must log in or register to reply here.
Share:
Reddit Pinterest Tumblr WhatsApp Email Share Link