Boy, you have been busy! Nothing like plumbing problems to make the holidays enjoyable! At least you got some nice tools out of the effort. As Tim Allen used to say on his TV show, "More power!" Is that a 1/4" impact wrench you got? If so, I have one just like it.

Where did you learn about working with PEX pipe? I have never used it and would not have known how to install those shutoff valves. I figure I better start learning now, because sooner or later I will have such plumbing issues to deal with!

Yes it is the 1/4" brushless impact. Now I need to drive some screws (though I don't have any immediate projects for that).

PEX - the plumbers put it in when half the house was 95% rebuilt. I sold all the copper that was taken out to the metal recyclers. All of the "water use" places are in that half so the only copper left runs from the pressure tank in the basement of the original house to the point they started working.

PEX is a lot easier than copper. When we rehabbed the prior house 30 years ago there was no such thing as PEX, I cut a LOT of copper pipe and sweated a LOT of fittings and shutoffs. Only had to redo one.

With PEX you just cut the tube with tube or PVC cutters, snip. You can use "Shark Bite" or similar fittings, they just press in. I did that when I put in the 12 gallon 110V water heater in the crawl space under the kitchen between the on demand propane heater and the water using sources. BUT I've since heard they aren't "life time" and shouldn't ever be used inside a wall so I forked over for the ratcheting clamp tool, which I may or may not ever have another use for, for this project. Given the valves are in a closet, if they developed a slow leak after a time it would be quite a mess and not noticed for a long time.

My relatively inexpensive clamp tool doesn't have the ring cut off feature mentioned in the video. PEX, unlike copper and PVC, is flexible so it is easy to run the pipe. The plumbers used crimp rings and a very expensive (like over $700 expensive) battery tool that did the squeezing, no hand squeezing necessary. I'm sure it is easy for a working plumber to justify that cost given the number of fittings they install in a month let alone a year.

And empty your wallet

Thank you, Mr. @Bruce. Whenever I have needed to work with plumbing, it has usually involved copper tubing. I never was able to learn how to sweat copper connectors together - they always leaked. Compression fittings usually worked but I had one compression fitting fail under the kitchen sink at night and flooded the kitchen and den area. That was quite expensive! So when I started working with the flexible tubing with the fittings already formed, such as connecting faucets to water shutoff valves, that was great! But that left the work where the length was not standard. It also left the work where items such as the water shutoff valves themselves needed replacing. So thank you for showing this to me!

Yep, I had to eventually replace all the quarter turn valves in the prior house. Sure was glad I'd put in shutoffs to every water using space when I first did the work. No need to shut off the entire house while making a repair.

Since STA likes pictures ... my Harbor Freight "portable garage" sorta fail. It was leaning HEAVILY to leeward in big winds bending the posts where they met the top cross piece. I put in the lower bracing to keep it from leaning. The pipe is very thin walled and bent and cracked in the wind at the top of the short braces, pipes going into several upper fittings also cracked. So I had to add the long braces that go to where the cross pieces meet the posts. The posts were already screwed into the 2x12 so I didn't have to add anything to attach the lower part of the wood bracing. The tractor just fits between the brace pieces. 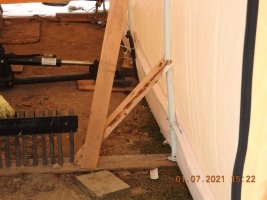 And no, you can not get replacement parts for the "garage"

Hmmm, I just noticed when looking at the first picture that the post isn't even connected to the top cross piece any more. Another repair task I guess

Baymule said:
So you had to buy electricity? Horrors! Put up a wind turbine!
Click to expand...

Actually, I had considered a wind turbine to go with solar 5 years ago but the solar guy said he stopped installing home wind turbines. Not reliable enough and require a fair bit of annual maintenance - up at the generator on top of the 100'+ pole of course. So I went with 24 panels on 2 towers instead of half solar, half wind. 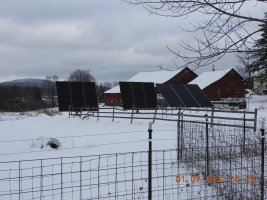 Another array of 12 panels in front of the original 24 on towers? The new panels are higher watt so a 50% increase in panels has added 60% or more extra electricity. Now if we only had some

Having had a HF carport I can understand the frustration. Fortunately we didn't have an issue with wind, probably because we are sheltered with a thick belt of pines that moderates it. They are a temporary fix in any case, the tarp material on the roof degrades and wears from rubbing over the supports.
I still have the front and back panels that I salvaged when we took it down. They are in good shape and handy for tarping.
Hopefully you can get a couple of years out of it.

Bruce said:
PEX is a lot easier than copper.
Click to expand...

While Pex is easier and cheaper to install than copper or PVC (no fittings needed for the bends) another reason plumbers started using it in stead is that is goes in really fast. BUT be very careful with installing the drywall or hanging pictures since a stray nail or screw can puncture the flexible tubing. On our apartment we missed the stud when installed the drywall, and it punctured the new PVC piping in the kitchen. Luckily plumber was working on other stuff for us and fixed t right away. We discovered it when we turned the water back on and it started dripping down the outside wall. Ordinarily it might not have ben discovered unti t ruined the wall and went into the downstairs units. That unit was over the garages so it showed up immediately!

When we replaced our tub with a huge walk in shower in the Master BR our plumber used Pex. We just have to be careful on the office wall when hanging stuff. That unit was over the garages so it showed up immediately!

Bruce said:
Yep, I had to eventually replace all the quarter turn valves in the prior house. Sure was glad I'd put in shutoffs to every water using space when I first did the work. No need to shut off the entire house while making a repair.
Click to expand...

You can never have too many shutoff valves IMHO.
F

When we put up the "shelter greenhouse" for the chickens here, DS said that the wind would cause the material to rub and wear on the pipe supports. Used the foam pipe insulation that you just slide over the pipes... it is like 3-4 ft lengths and is slit all the way down the side so it just fits around the pipe.... Stopped all the rubbing. Very smart of him to think of it because I never would have.