Yes I could use a longer rope so I wouldn't have to reset when the tow strap hooks get to the pulley. Then the "reset" would be taking each pulley off it's respective tree as the log gets to it. Not TOO hard IF one has a logging wench (or other assistant). Otherwise I'd have to be able to see each "next" pulley from the tractor, stop at the appropriate time then get off the tractor to go remove the pulley (which I have done).

Those self releasing snatch blocks cost a few hundred dollars each. From where I was working I'd have needed at least 5 if not 6 blocks to pull the log even 100' because of turns in the trail.

I don't remember how many times I posted on one of Mike's logging videos that he takes enough trees out to justify the cost of a logging winch. I guess I wasn't the only one to do so. Of course once he finally decided to get one, he couldn't believe he hadn't gotten one a lot sooner.

Did you get any snow from the storm that just went through?

OK, Mr. @Bruce! With you in northern Vermont you almost certainly got more snow than fell in west Texas, which rarely gets snow. So we want to see your snow.

Here is what fell near Iraan, TX, which is on the Pecos river in west Texas:

Our DD sent us her snow pictures from Odessa today. The two little granddaughters made a snowman-about one foot high from 3 carefully placed snowballs! LOL LOL Not enough snow for much more than that!

That is some seriously ugly snow STA! Nothing worse than snow that is as much water as ice. Are you going to post the video of the news reports of all the people who had heart attacks shoveling it next?

We got about 6", no pictures, it is dark out right now

I had to use the real tractor to move the snow because you and I are hard luck twins! I figured I should charge the battery on the garden tractor before the snow fell. Somehow the "relay" for the winch touched the now uncovered positive pole of the battery and it fried a thin copper piece (new part on order). The winch went nuts and the cable mangled the curved plate behind the reel. Hopefully that isn't very important because even if I reshape it the only way to put it back on is to take the winch off which is a couple of hours of time given all the bolts that are ALMOST accessible.

New "task". It was decided we needed a "Covid isolation" shower for when my SIL showed up from Virginia on Veterans Day. You see, the DD's refuse to use a tub shower if there is another option so there wasn't any actual need to have the shower set up. I scurried around, ordered a curved shower rod, bought a curtain, replaced the spout with one that had a fitting for a hand held shower. The plumbers figured connecting it up where a regular shower head would go was sufficient. I have a certain "dislike" for professionals, just do what you THINK the customer would want surely don't ask any questions. Of course that means the hand held would be TOTALLY useless if one was using the tub for themselves, a child or a pet. I had the tub/shower all set up for Veterans Day .... except no cold water from the bathtub valve (which has been used MAYBE 3 times since it was put in in 2013). 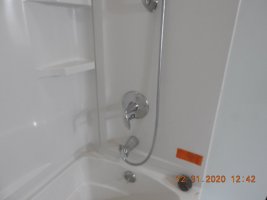 I took it apart hoping to find something obvious, but first I had to put in some shut off valves because professionals don't care about future maintenance (or figure they can ream you later when repairs are needed). The Pex pipes happen to run up the front wall of the little closet in our bedroom that I lined with cedar. Why they don't run up the east wall (left side of closet) straight up to the valve is beyond me. But I guess doing it the hard way saved me from having to take down a bunch of thin cedar "planks" to access the pipes.

The pipes are around the left side of the closet opening, I've taken out 4 shelves. 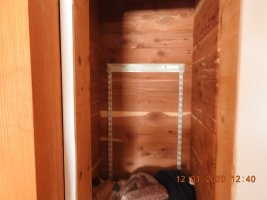 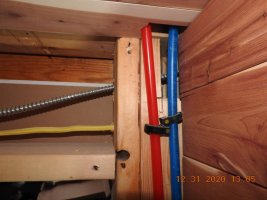 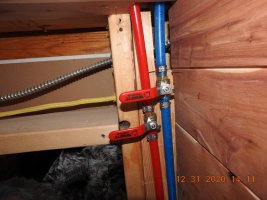 I had to buy a clamp crimper. The "pro" models cost well over $200, the one handed ones over $400. I paid $50 for this one on Amazon, I figure it is less than the price to have a plumber even show up let alone do any work and it only needs to work for 4 clamps (OK 5, I messed one up). Good thing I got the one handed model, I don't think I could have gotten a 2 handed one in position to do the deed. 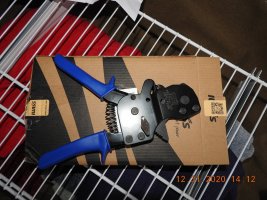 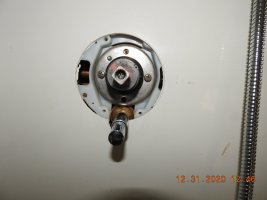 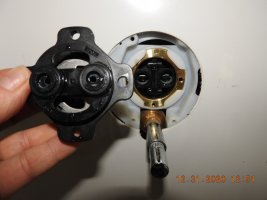 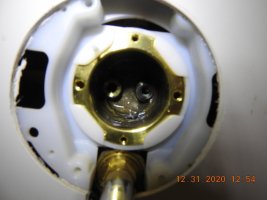 I had my sister-in-law slowly open the shutoffs, water came from both hot and cold lines so the pressure balancing valve guts are bad. I called the place where we bought it today. The guy said he had one, $75. Ooookay. BUT he said Kohler has limited lifetime warranty on some parts so I called them and

they are going to send me a replacement free. At least one good thing related to this project.

The Kohler guy said the pressure balancing parts can "freeze up" if they aren't used so we'll have to run some water through it every couple of weeks. By the time the crimper tool came, SIL was well past her 2 week isolation period, using the downstairs shower of course so no big rush to get this done. But we should be set up for the NEXT time we need it.

"Stimulus" present to myself on the left, Xmas present from my in-laws on the right. The 18g brad nailer came as a "kit", for some reason it wasn't more expensive than the "tool only" on Amazon. It has a 2 AH battery and a nice big carry case. The impact driver is "tool only". I have two 1.2 AH batteries that came with my drill and already got myself a "stimulus" 5 AH battery. 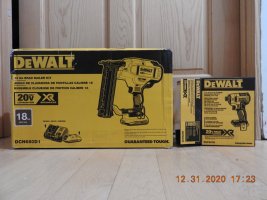 Would have been nice to have the brad nailer when I put the cedar in the closet. But now I have it for all the door, window and baseboard trim I need to make and put up.

I think you just have the most fun Bruce! Who doesn't love a plumbing project?

I know STA just LOVES him some plumbing problems

....glad your a handy dude Bruce