Baymule said:
Sounds like a productive day! I would LOVE to have grass to mow!

Devonviolet said:
I just love that these little birds trust us enough to make their nests in our space. It's so cool to watch them raise their young. I especially like that I can see the babies in the nest from the kitchen sink.
Click to expand...

That would be pretty cool. No way to see the babies in the barn swallow nest, the gap between the top of the nest and the floor above is only about 1.5" if that. Sometimes one can see some beaks when Mom or Dad come to feed. It amazes me that these birds fledge without ever having room to stretch or build up wing muscle. But when they follow a parent on the specified day, they drop off the edge of the nest and fly like they had been doing it for a week.

I have seen several baby Mockingbirds trying to fly from the ground for quite awhile with little success and then suddenly they are airborne.

@Devonviolet ....can you put a mirror above the nest permanently, that way you can look out your window and see into the nest ?

Good idea @B&B Happy goats! DH wants to get a mirror, that has an attached telescoping handle, so we can look in the nest.

Well on the very next day (Tuesday), I noticed the baby birds, on the porch, had left the nest. On Thursday, I was telling DH we won’t be seeing the birds anymore this year, and both parents showed up and landed in the nest. They only stayed for a minute and were gone. I haven’t seen them since.

Tuesday was day 145, for Hope. Danny Boy is the daddy. Her udder has been getting larger, for the past month or so. Then, on Wednesday I notice a bit of discharge sticking to her tail hair. So, I took her into the barn and clipped the hair on her legs and tail, to make for a less messy birth. I also trimmed her hooves.

Tomorrow is day 150. We moved her to a pen, with her sister, Faith, and the hoop hut, so she could see the other goats and have her own space, when she has her kids. We have been checking on her multiple times a day. Hoping to see Hope and her kid(s). I figured that since she is a first freshener, she would have one kid.

This afternoon, we had to go to town to get one more bag of feed, to get us to next Monday, when we will buy our monthly feed. When we got home I immediately went out to check her, as I couldn’t see her in the yard with Faith.

As I came around the corner, I could see a tiny black body curled up on the floor, of the hoop hut. As I went through the gate, I could see a second kid standing next to Mama goat.

Of course, the first thing I did, when I got in there, was to turn each kid over. Two little bucklings!

One appears to be pure black, and the other has a white bar across his nose, two white ears and a white spot on his head, just like his Mama. Both have elf ears, like Calendula. 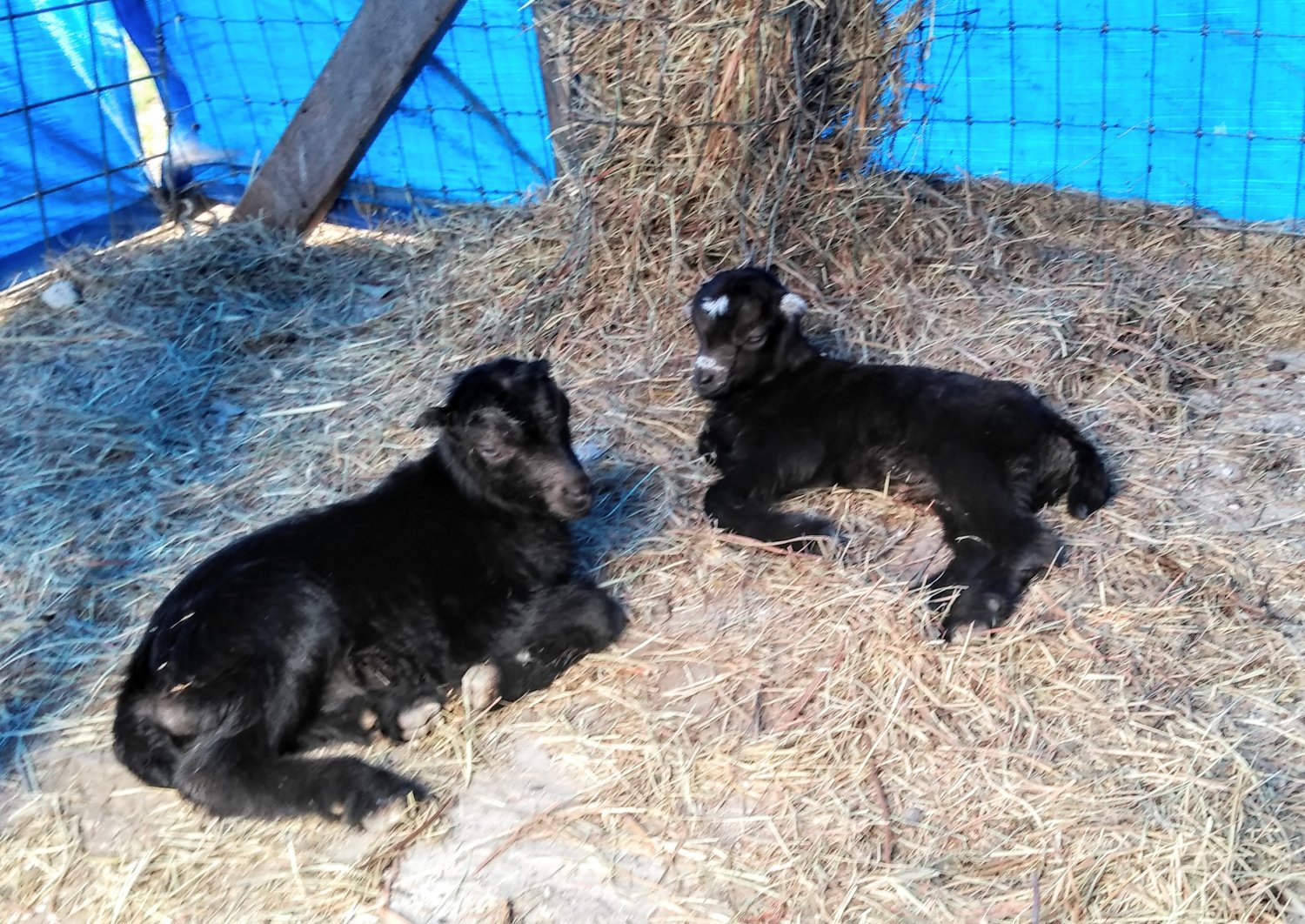 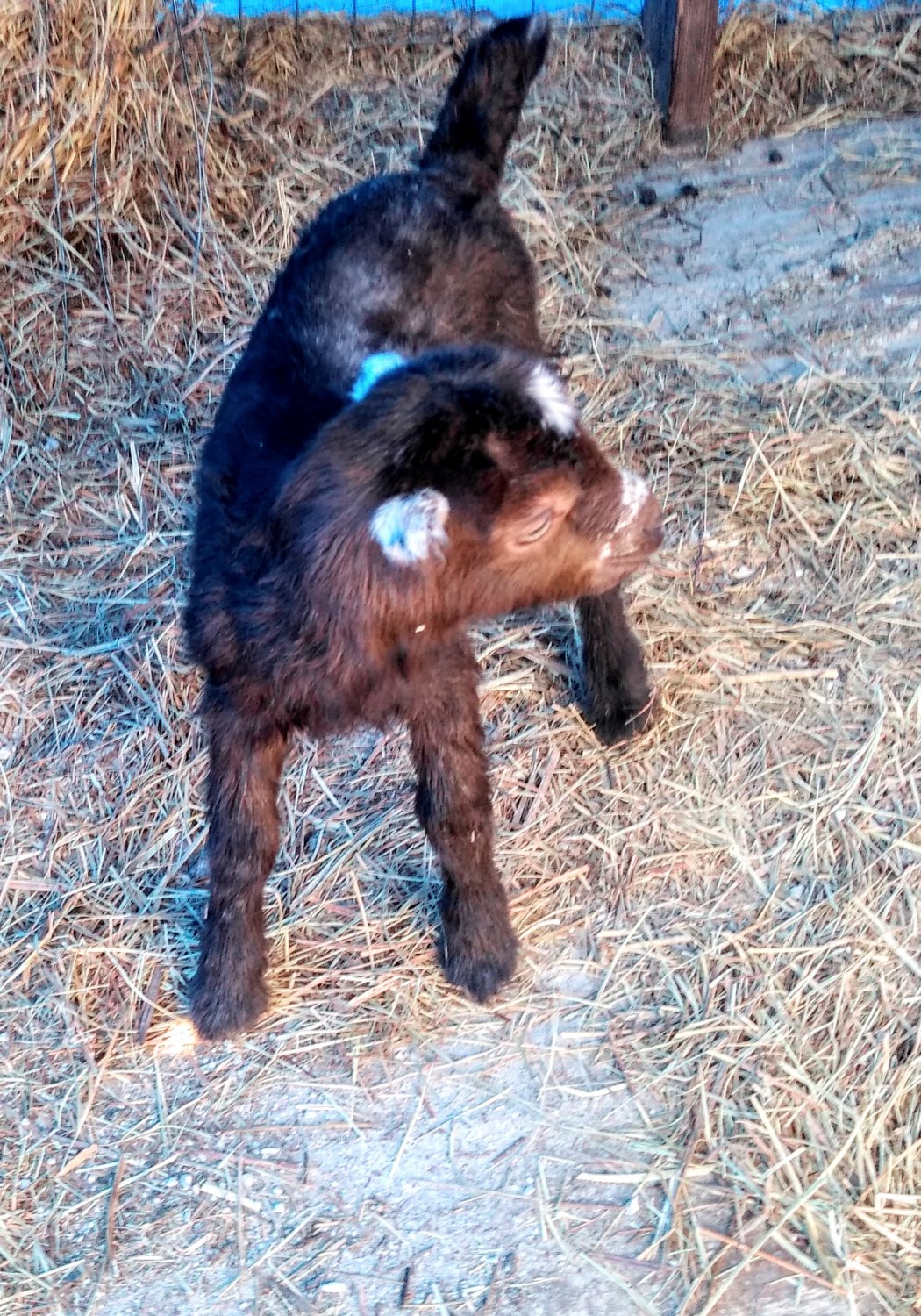 ETA: I must say, in this photo he looks more brown than black. 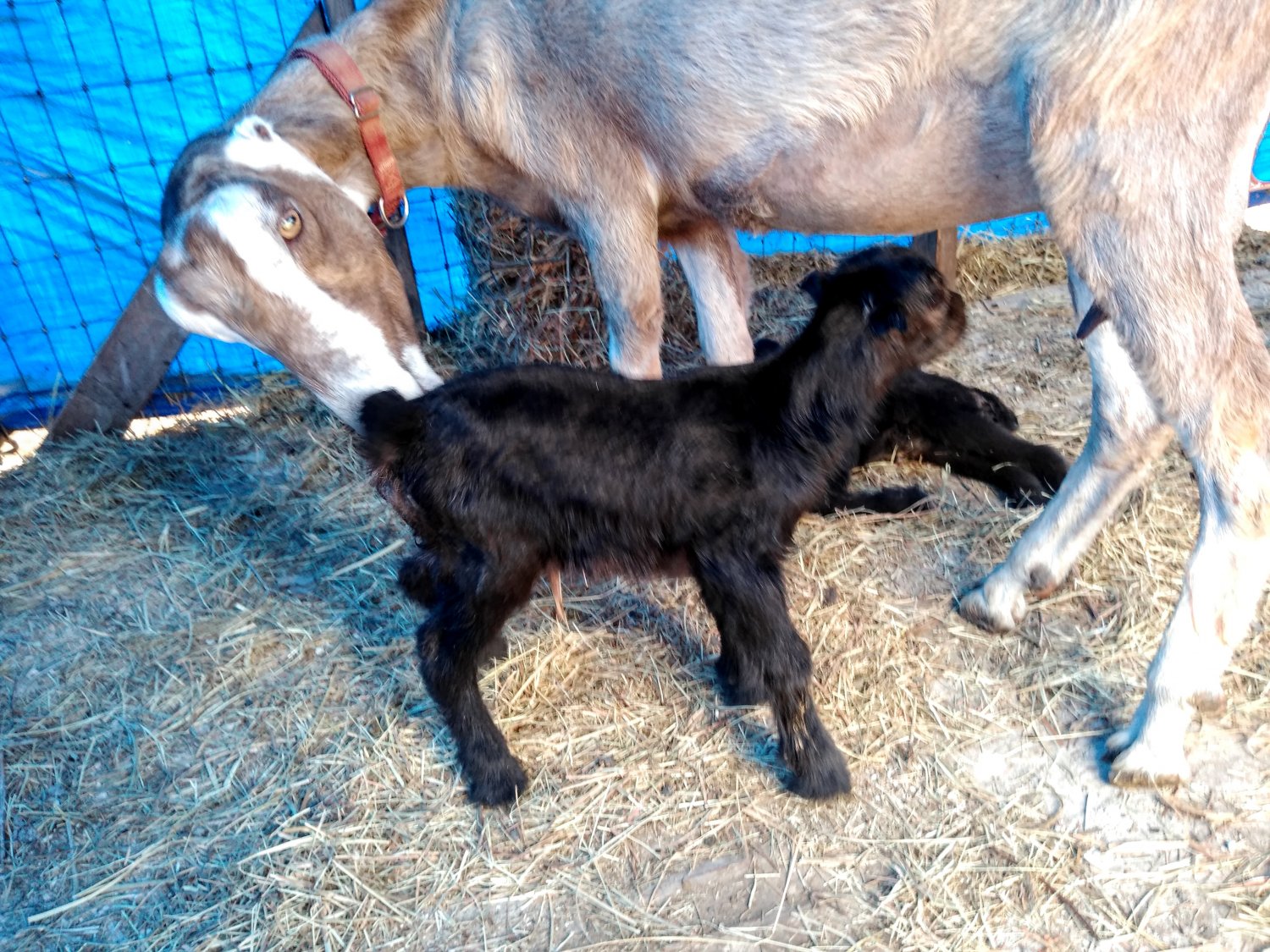 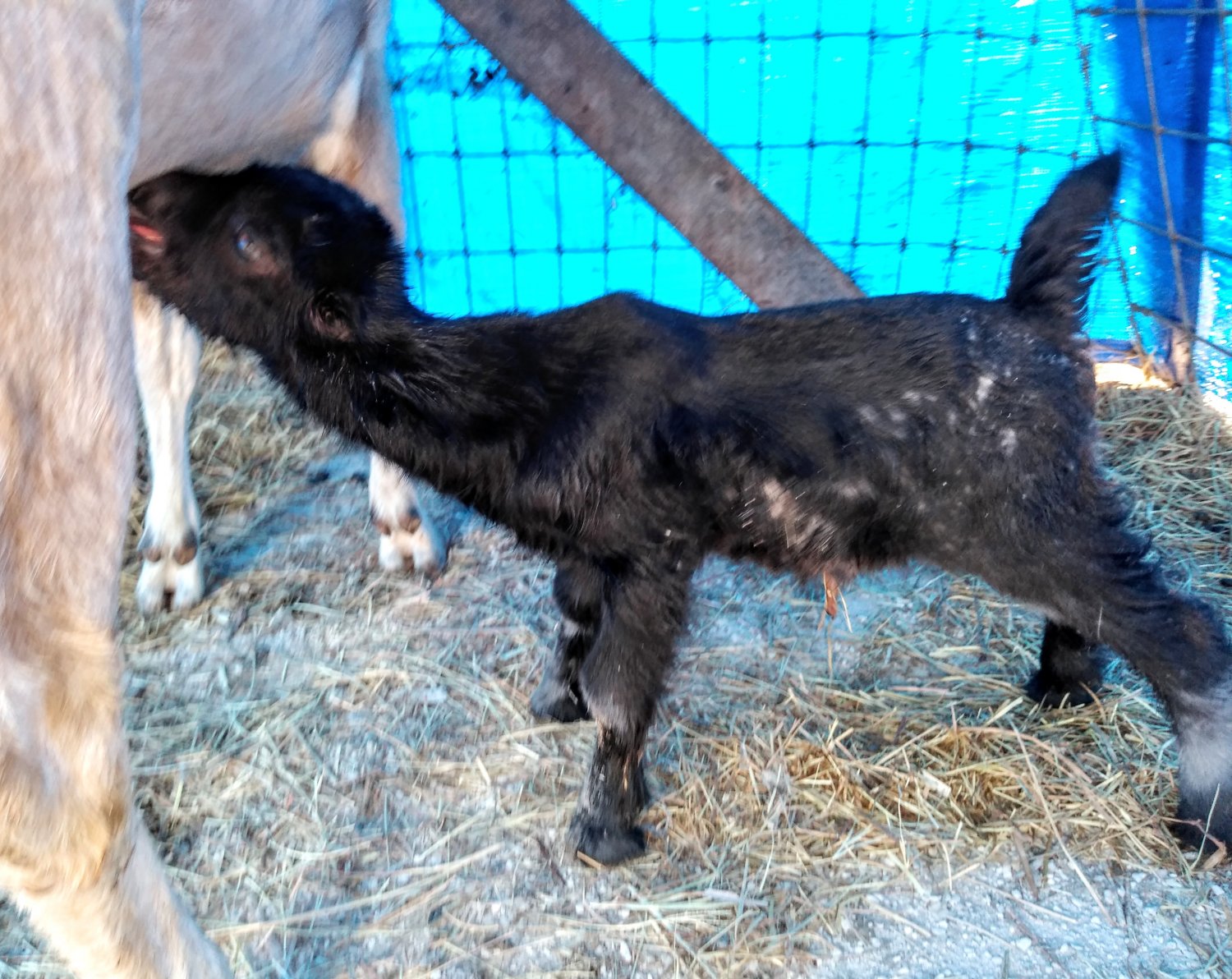 ETA: Those white spots on his side are not in his hair. I sprinkled barn lime, to knock down the flies. They were thick, going after the residue from the after birth, that we (and Hope)) had cleaned up. The lime helped knock down the flies some, but not totally. 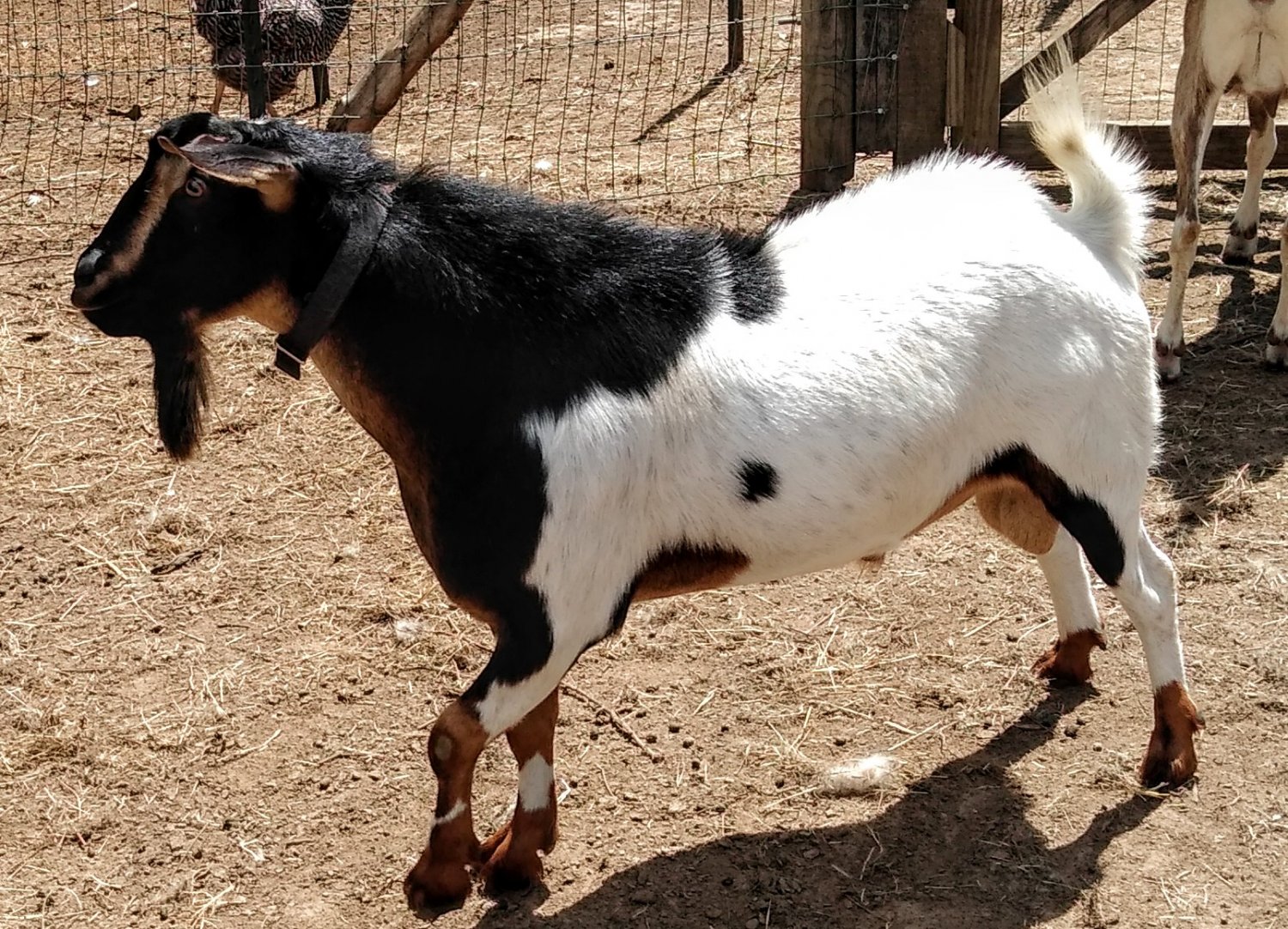 Awww......Danny Boy is a Daddy! What beautiful kids! Congrats!

More photos . . . I took the kitchen scale out, when I fed the animals, and weighed our two new boys. The all black one weighs 6 pounds 12 ounces. The one with white on his head weighs 6 pounds 5 ounces.

Here are a couple cute shots I got, of our two little boys on the scale, this evening. 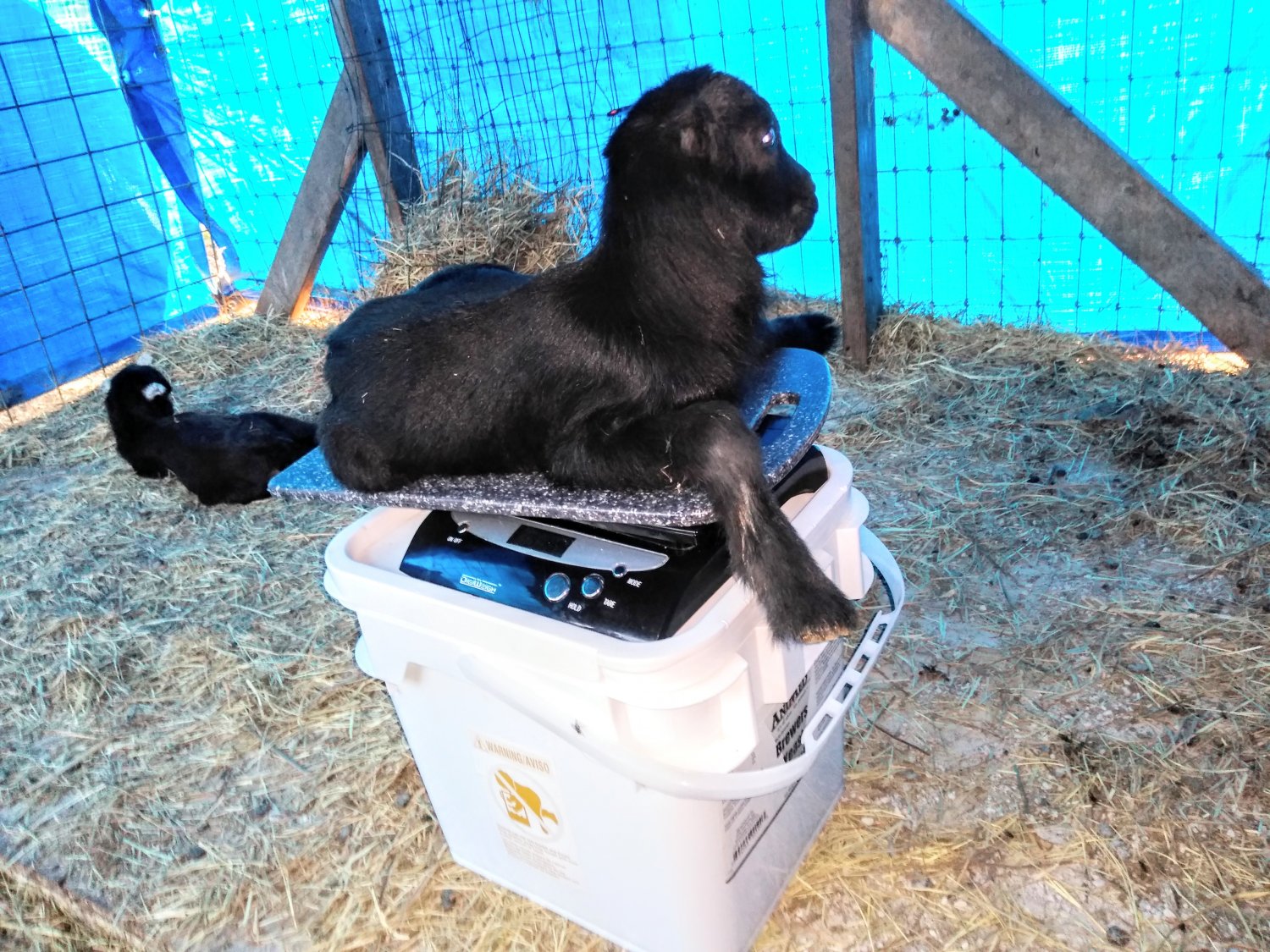 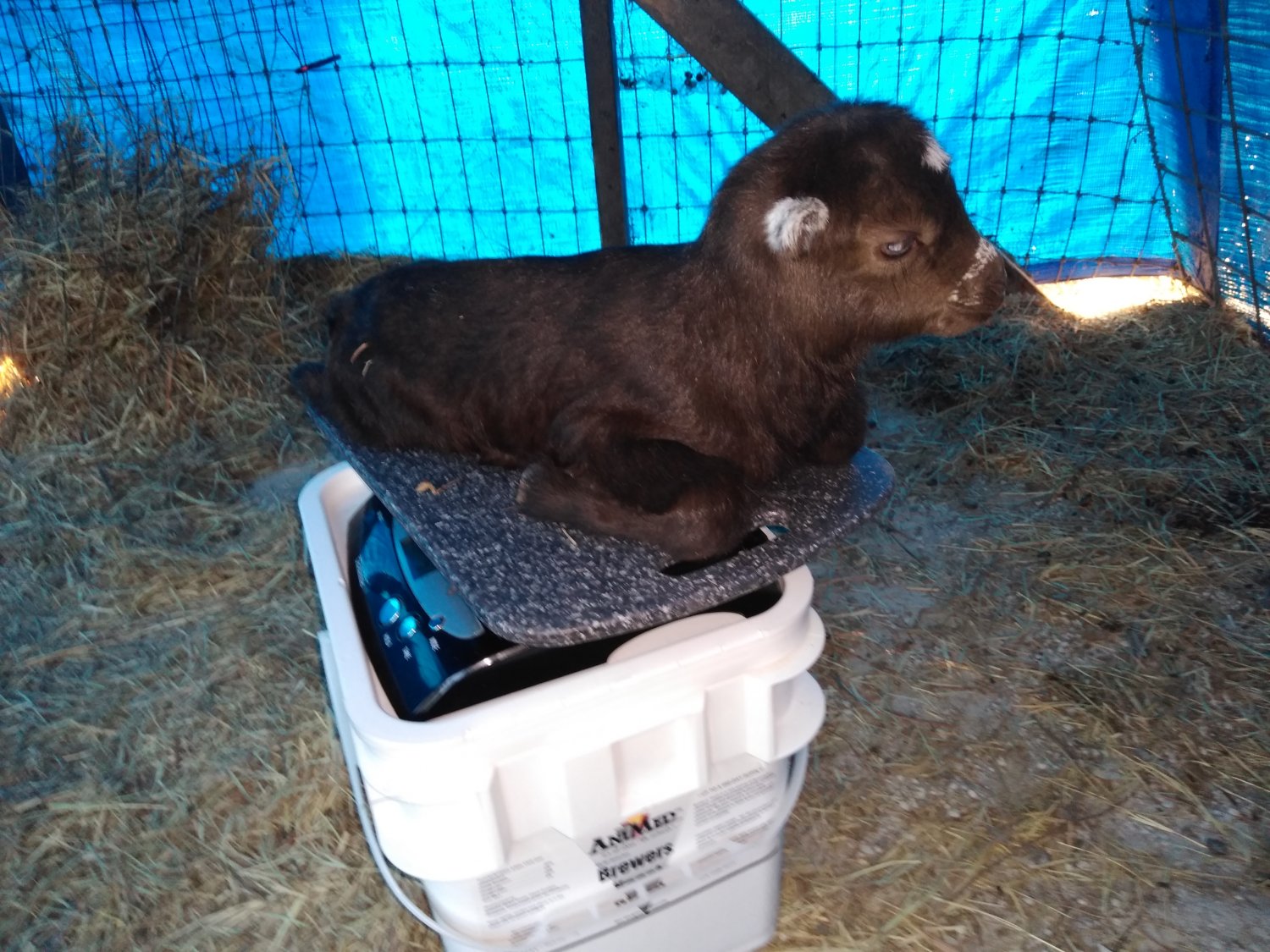 Lovely!! Nice to come home & find a pleasant event with no issues!

I know you bought Danny for providing meat kids. Saw a happy dance at "both bucklings" & assume that was why. We have to plan those things, just like growing fruit & veggies.
Last edited: Jun 16, 2019
You must log in or register to reply here.
Share:
Reddit Pinterest Tumblr WhatsApp Email Link