Agree with all. Have to say, from pics, fronts looked longest. So if those were trimmed you have a good start.

Hundred years back my first horse was one who hated men! Unknown he had put a couple in hospital. A young girl who loved anything horse taught him to trust. I could do anything and he loved it. Men he tolerated but, not to ride! Too much mishandling. They know. So continue to work on him. Learn to file those hooves, later things will get better!! A regular filing will keep things in pretty good shape for a while.

Sorry, I meant to comment on this in my post. You should not be tying him to have his feet trimmed. If he is scared, meeting resistance on his head when he pulls back will make him feel trapped and you will have more work to undo.
Hold him on a loose line, not trying to force him to stand still with your hand under his chin. You may need to practice this method before you have anyone work with his feet if you have the common habit of holding a horses head with tension on it. Stand on the same side of his head as the farrier is on his body. If he backs up, calmly go with him until he stops.
K

thistlebloom said:
A horses feet are their escape mechanism and it takes a lot of trust for them to have someone hanging on to them. My trimmer is worth his weight in gold. The most patient man on the planet and willing to take whatever time necessary to make her trims a good experience.
Click to expand...

Very true. My farrier is pretty old school and with a horse that knows how to behave but just isn't doing it he doesnt have a lot of patience, but he did the first trim ever on my colt when he was a year and a half old (shortly after I got him) and tolerated all of the baby behaviors that happened and now he stands still and takes a nap while he's trimmed because he had good experiences for his first few times. Now, now that he's around 13 years old and knows better, if he tries acting stupid he'll get smacked with the flat of the rasp to remind him to behave but that's just because he knows better already.

We are in no rush with him. With Brownie being so calm with us and his feet, I was not expecting him to have this reaction.

Finding experienced horse men to help will be a challenge. My husband and brother in law said they will come down to help.

He is use to walking to the hitching post. Where we wrap the lead rope. Then my daughter brushes him out and picks his feet. We did not schedule with the farrier until he stood like a gentleman for us.

If it sets us back, then were set back. We are not giving up. I personally have not had a horse be great at standing still for his feet to be cleaned then be terrified of someone else. This is new for me.

My friend said she has a rasp and nippers I can use. We have rain today. If it is clear Monday, we will see what his reaction is to us with the tools.

We went down to the rescue to work with brownie. We have a huge setback. That is okay. We will work with him. He was not wanting his feet messed with at all today.

We were able to get him to calmly pick up his front feet and us rub his back legs with out him going sideways/backwards. Baby steps again until he accepts us picking up all 4. Once we are to that point again, we will ask my husband and brother in law to come help us.

Pictures of my daughters brushing brownie out today. In the pictures you can see how we wrap the lead rope.
Today was the first time my older daughter helped with brownie. He was not sure about her. 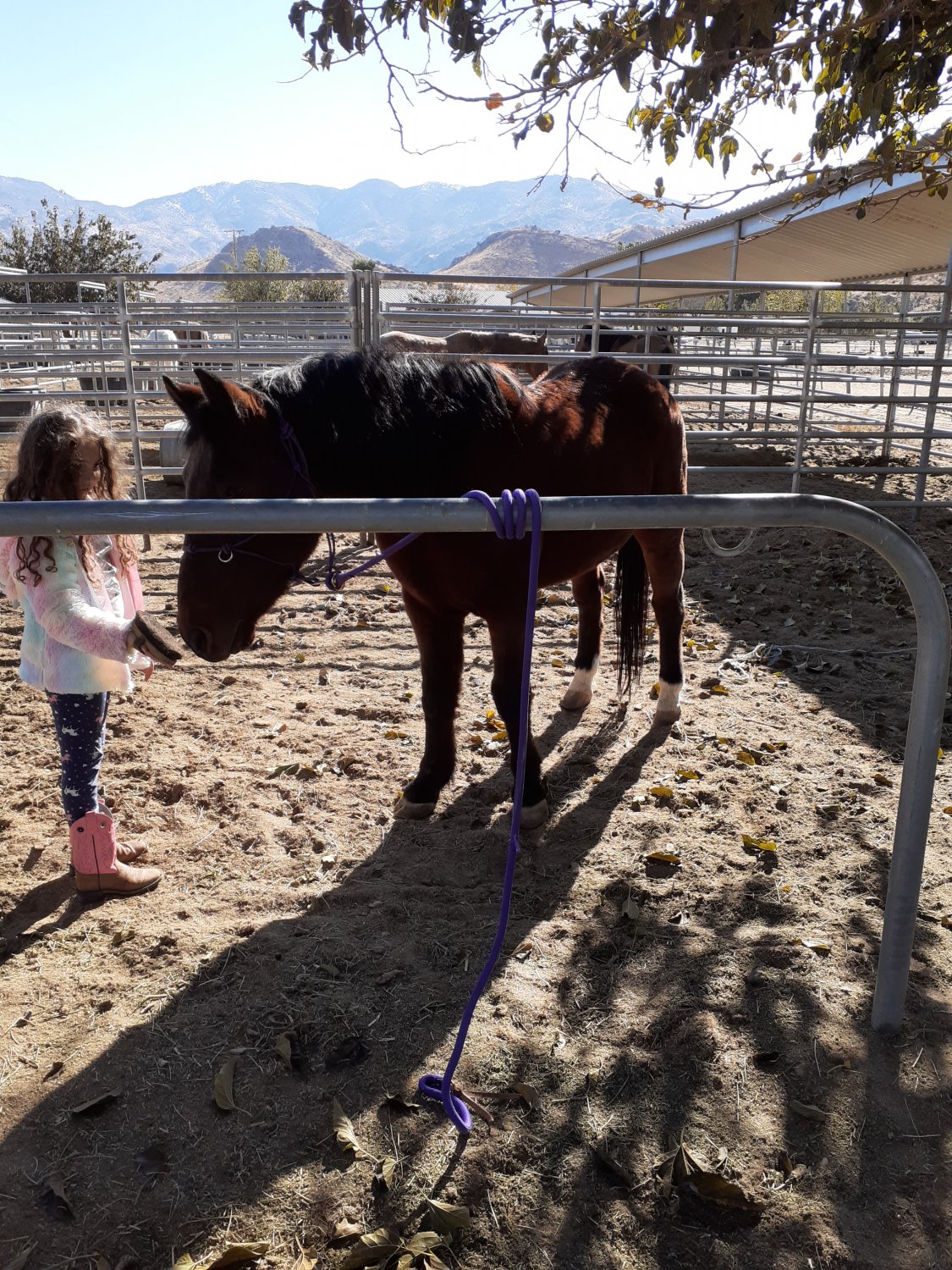 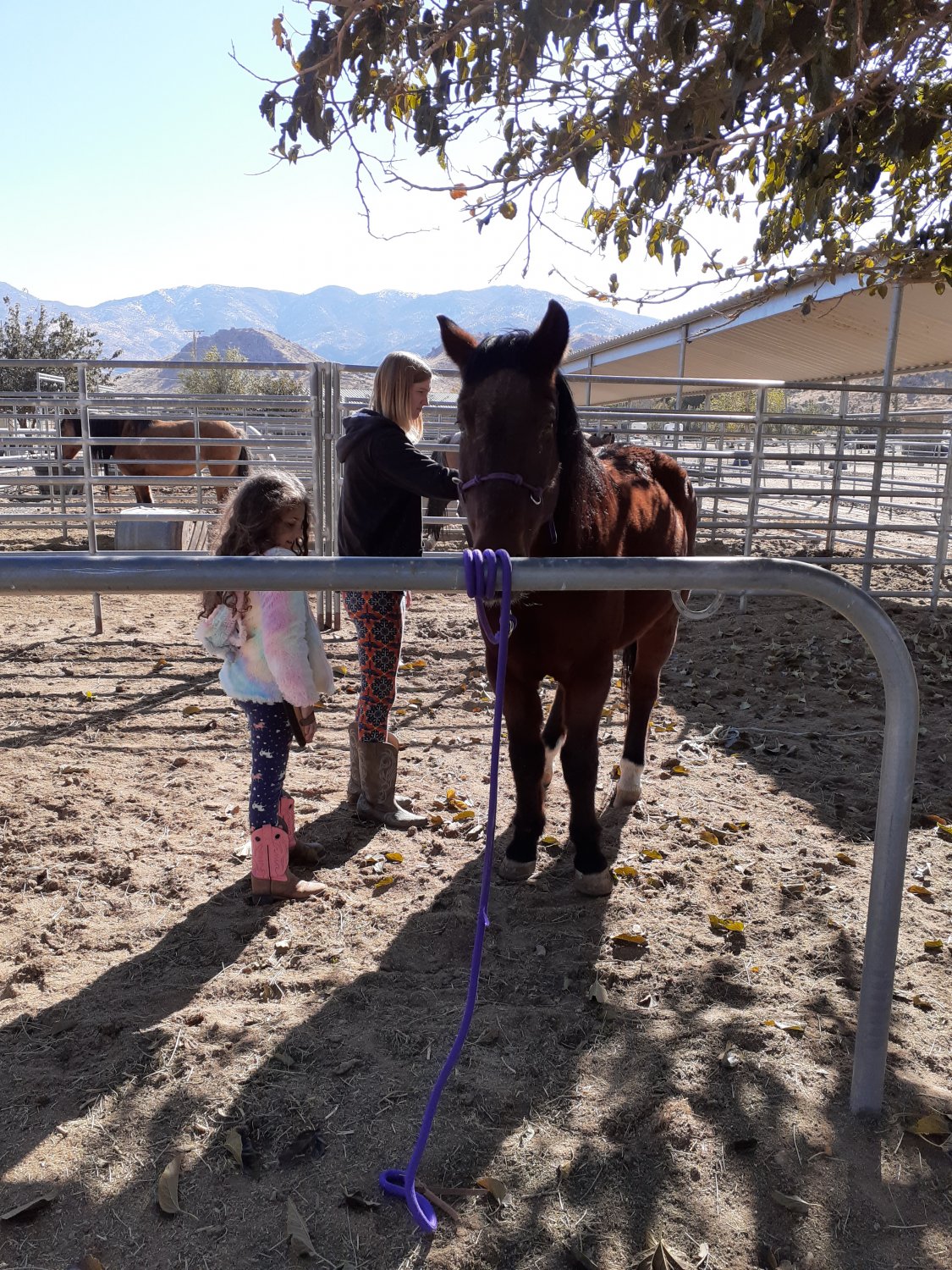 What is his history? Since he is at a rescue he must have had some handling previously by an owner? That can really muddle the situation, sorry you're back to square one with him, but it sounds like he is in very good hands.

My mare spent a year and a half in a holding facility after her capture, and was trailered to different adoption events. When I saw her she was on her third and last chance to be adopted. Although she was extremely defensive and reactive she has become an awesome saddle horse, but it was two years of daily handling before I got the first ride on her. She is still suspicious of new things, park a wheelbarrow in a different place than usual and she will watch it closely. She misses nothing.
My point is, she was a relatively clean slate, nobody had previously tried to "train" her, so in a lot of ways the trust/relationship building was more straightforward.

I admire what you're doing and your commitment to taking whatever time he needs.

He has been at the rescue quite some time. Not 100% sure who adopted him first. Or what they did.
About 8-10 years ago he was part of Monty Robert's wild horse gentling clinic.
I was told they did not ride him, but he bucks? He has been sitting at the rescue since. He only got messed with when it was time for his feet to be trimmed or wormed.

He is awesome with ground work.
You can throw a saddle pad all over him, he does not care. Bring out any saddle, it's the scariest monster ever.
The rescue has had people here and there come out over the years and work with some of the horses. Not 100% sure who exactly they worked with. There's a lot out at the rescue. I have been working with some of the ones they want to find homes for.
They are trying to downsize. The founder had 2 strokes, and now is in care with dementia and alzheimer.

They have some really interesting looking horses, but it seems the "prettier" ones have less handling. A few can not be caught or touched.

Are you familiar with Warwick Schiller? He has some YouTubes, and a subscription service. He recently did a CAT-H session where he talks about what that is and how he uses it. He has changed a lot of his attitudes toward training techniques in the past few years. I'm not necessarily on board with his worldview, but do appreciate his opinion on training.

I am not familiar with him. I will look up his YouTube channel and watch his videos.

I watched multiple videos on YouTube from Warwick Schiller. I had my husband watch the video where he works with the mare that does not like to be caught.
One of the mares out at the rescue my husband has bonded with. This mare does not like anyone! Anytime anyone walked into her pen for anything she spun around and gave a warning, I will kick! The wife has said she's kicked a few people.

The wife to the founder was in shock that my husband was scratching her. Not through the pen, but in the pen full on butt scratches and shoulder scratches. She loves my husband. He's the only person that can touch her. He is determined to train her.

Brownie update, he picked all 4 feet up today. He was pulling his back legs under him. Baby steps. He was not walking away or backing up, he willingly picked up his feet. We left it at that.
Watching the way brownie interacts with my youngest daughter. That little horse trust her so much. Even my oldest daughter coming to help with brownie, he becomes alert. He does not like new people.
You must log in or register to reply here.
Share:
Reddit Pinterest Tumblr WhatsApp Email Link