Making a pasture....and keeping it managed.

Reindeermama said:
I have four sheep coming, hopefully that will help, while I research remedy.
Click to expand...

Before I tell you what I know about Remedy, NEVER believe every glowing thing any herbicide, feed supplement or breed association says...more on that later in the thread.
I keep this website bookmarked..you can find the specimen labels (instructions) and the MSDS of almost any product by any brand in the USA.
http://www.cdms.net/label-database

Remedy Ultra (the current version of Remedy) is:
1. In most states, an unrestricted herbicide, meaning you don't need an applicator's license to buy it.
2. Active ingredient is Triclopyr.
3. Inactive ingredients, are a trade secret.
4. It mixes equaly well with water, diesel, and most crop (vegetable) oils especially canola (rape seed) oil, but those oils are often much more expensive than diesel.
5. It's a selective broadleaf herbicide that will not harm most grasses tho it can kill or at yeast damage forages such as clover and alfalfa.
6. It has no soil activity..no residual action. (It acts only on the plant itself and it's root system)
7. It mixes good with other herbicides such as 2,4-d, & Sendero.
8. Like most herbicides, it needs a non-ionic surfactant mixed with it..the surfactant makes the droplets spread out over the leaf and stem instead of beading up. Many people use dishwater detergent as a surfactant. I'm not a big fan of doing it.
9. Unless things have changed, you can legally only apply 8qts per acre per year on non-grazed land and only 2 qts per acre on grazed range land. That, is a LOT of herbicide, considering the usual tank mix recommendation for my use was & is 1-2 qts Remedy/100 gallons of water. Regardless..do not exceed those limits..It's The Law!
10. When I was in West Texas and we were using Remedy for prickly pear, huisache, and mesquite control. We moved the cattle, goats and sheep off the area being treated for 48 hours and then let them back in to graze. But, the label states there are no grazing restrictions or time limits for Remedy Ultra. YRMV.
11. Watch how much you are spraying as a spot spray..it is a lot easier to exceed the annual allowed limit when spot spraying than when broadcast spraying.
12. Keep it away from water. It can kill aquatic life and aquatic plants.

There are other herbicides labeled for huisache such as Sendero, I have used it, didn't like it, has a LOT of restrictions Remedy does not have, and unless things have changed, it is not labeled for most states. I believe only for Tx, Ok, La, Az, and NM, and it's more expensive than Remedy Ultra. IIRC, $136/gallon.
http://www.cdms.net/ldat/ldAIF005.pdf

mystang89 said:
Do you believe that will allow the poison into the vascular tissue of the wood?
Click to expand...

Depends how long ago the tree was cut. If more than a couple months ago at the most, I doubt the live vascular system extends very far up into the stump. Using a cordless and drilling farther down into the cut stump, staying out on the edges where the vascular areas are, you'll probably have better luck. And in that instance, Roundup may even work.

But again, I don't have experience with black locust.

pH as we've seen, is important to a plant's ability to grow, but what do we do to make the pH of our soil 'right' ...and should we?
A soil test tells us what our pH is, but we also have to know what our perennial forage of choice likes or does well in. That, is part of your long range 'vision'.

I am not a fan of jumping to every new forage that is developed, imported or otherwise comes down the pike. In the late 50s thru the 70s, a whole slew of different grasses were the darling of agriculture, heavily promoted and some fell flat on their faces after farmers and ranchers had spent considerable time and expense to grow them. Alicia, Argentine, African Star, and Pensacola Bahia, all the different bermudas, the Tiftons, and a dozen others. My father tried about 4 of them here, as well as different clovers and none except Pensacola Bahia and Coastal Bermuda worked really well. (Bahia and coastal have been around so long now both are considered domestic)

pH adjustment is not like fertilize. In a small garden or flowerbed setting, it's pretty easy to quickly change the pH but in a pasture of grazing or hay grass, it's slower..much much slower. You can apply NPK fertilize or organic biomass (composted animal poop) and see the results in just days after a good rain, whereas it takes months and even longer to change the pH in a pasture. It's why you need to start planning early. We won't go into a lot of different specifics because there are just too many variables in the forage types, location, basic soil types and drainage but to raise pH from acid to closer to neutral, the application of lime or gypsum is the most common method and it takes a lot of it.* To lower from an alkaline pH toward or just below neutral 7, the most commonly used method is applying sulfur, tho there are a few other ways. Sphagnum moss for instance, but it would be extremely cost prohibitive to lower pH using this on a pasture of any size.

So, we take our soil samples or get the extension agent to come out and do it, send it off and get the results back. Usually the results tell you more than just pH. They will also recommend any fertilize applications needed, but for now and first, you want to begin getting the pH where you want it. Unless you live very close to a crushed limestone plant or quarry, it can get expensive due to trucking costs and the more you need, the more trips the trucks have to make. Yes, trucks...plural.

Just to get an idea how much it takes to raise or lower pH, here's a chart or 2 but these are general recommendations and your's will likely differ. 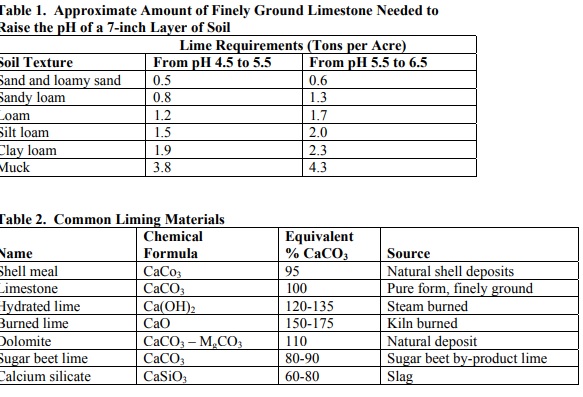 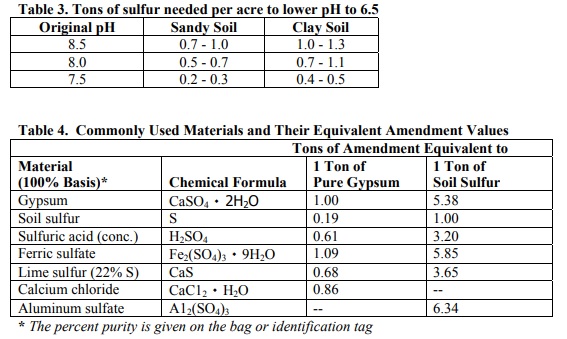 These tables and more info on changing pH can be found at:
http://vric.ucdavis.edu/pdf/Soil/ChangingpHinSoil.pdf
Last edited: Jul 20, 2018
M

Once again, thanks for the breakdown. Seems the only thing really stopping people from changing the pH of the soil is money. Other than that it's simply. Spread this, or spread that.

But because pH adjustment is slow, with a little adjustment being within weeks or months and more adjustment toward the intended goal as the months progress, and even tho the outlay has to be done at the time of purchase and spreading, that cost gets spread out over the time period the adjustment is good for. That, can be years. (most agriculture purchases and outlays should be viewed in this manner anyway...the cost of a tractor for instance, should be viewed as divided by the number of years you are going to be using it)

A little more about pH so we know what constitutes the difference between high and low pH. It's not just the number of H ions, but what kind that determine the pH :
pH is a measure or 0-14 scale of potential hydrogen ions in the soil that are available to the plant. It is an inverse scale, (kind of like wire gage is--the smaller the # the bigger the wire diameter.) to represent the number and type ions instead of having to state the number of ions per sq centimeter.

Acidic soil gives a pH # of under 7 and it means there are way too many + charged hydrogen ions available and each number on the pH scale is a multiple of 10 in contrast to the number below it. A soil with a pH of 6.0 has ten times as many positively charged hydrogen ions (H+) present than a soil with a soil pH of 7.0.
We all know that water is a molecule made up of 2 hydrogen atoms and one oxygen atom. H2O. Delving further down into the properties of water, it (water) often changes the hydrogen atom into a Hydroxide, because 1 of the H atoms has lost it nucleus, and this gives it a negative charge instead of the +charge H usually has.
Alkaline soil (pH above 7) has more ions that are negatively charged Hydrogen atoms bound to an oxygen atom than it does the H+ ions.
Soils at or very close to neutral 7 have an equal number of - and + charged H ions.
This is as far as I'm able or willing to go to explain what happens in soil except to say adding lime or sulfur type additives to the soil causes molecular changes to the H atoms in the water molecules, by either knocking off an electron or adding one to the H atoms that are attached to each tiny particle of soil, whether it is sandy loam, or clay soils.

When I tried to open the first two attachments It wouldn't let me... I got the following:

I think I mostly have clay loam. Looks like a LOT of lime if you need to bring the pH up.

Latestarter said:
When I tried to open the first two attachments It wouldn't let me... I got the following:

Got it, didn't realize it was the tables presented in the third link, which I was able to D/L and read. Thanks

Bruce said:
I think I mostly have clay loam. Looks like a LOT of lime if you need to bring the pH up.
Click to expand...

Limestone is heavy. Depending on a few factors, 1 ton of limestone could be a small as 1 cu yard. Other sizes may be as much as twice that volume for the same weight. It is spread very thin..it's not like you are going to go out there and see a solid mat of finely ground limestone, and in fact, you have to get down on your hands and knees and look close to even see it after it is spread. The standard 2 axle dump trucks you so often see on the road are 14 cu yards.......however, limestone weighs so much per yard that most can't carry a full 14 yards of limestone because of axle and road weight restrictions.