I just want to say thank you all sooooooo very much for all of the great info and y'all taking time out of your busy days to talk to me!! I ended up taking baby girl to the vet she has joint ill as I feared he diloldn't really explain much he just gave her a shot she only weighs 4.8 pounds at 11 days old She's a pygmy/Nigerian x she has to get another shot Saturday he was very blunt (I like it that way) he said he didn't like her odds but he will do whatever he can to help her. Now it's been about 5 hours since she had her shot shes barely even limping she been resting alot but no breaks during feedings or sneezing!!! I am hoping and praying with everything I got my little fighter makes it. I know it's to soon to really tell but I'll take the little victories I can get at this point! Thank y'all again so much! And as for the momma and baby boy they are both doing great spent a while watching them from afar he is nursing and her users are fine I think he just likes to try to aggregate her lol

Wishing you the best !

They stir emotions we didn't even know we had but I wish you the best.

Back to our normal kid self this morning eating up a storm and playing like crazy I'm trying to keep her from over doing it but she's wide open lol!!! This mommas heart is so happy today

So we have had a great day! Full of life and energy.... I've noticed this evening she has soft poops it's not watery or runny just soft could this be the antibiotics fault? Or do I need to be concerned about scours?

Location
125 acres of our very own heaven NC

Danielle89 said:
Back to our normal kid self this morning eating up a storm and playing like crazy I'm trying to keep her from over doing it but she's wide open lol!!! This mommas heart is so happy today

Yay! I would ask the vet if you can buy a bottle of the bose. It is a wonderful thing to have on hand. And since he has seen the lil one he is more apt to let you buy one now that he knows you will be his customer. .

She is gorgeous. And there is nothing wrong with a spoiled critter. Nothing at all.

Danielle89 said:
I definitely will

and this is her spot lol her blanket is being washed she literally will not sleep any where else or with her cover she claimed my son's Minecraft cover lol she will cry until she gets it when she lays down for bed it's the most odd but cute thing I've ever seen. I asked my husband what was going to happen when she's to big for the house an she refuses to be a normal goat lol (I didn't want goats but he did an bought her momma and the mommas mother an the moms sister now I'm in love head over heels with all of them) he said we will figure something out
Click to expand...

I don’t know what you think about milk replacer vs store bought milk. But I found one bag of this formula lasted me a good week for 8 really young goats. Now I go through 3.25 bags every two weeks. I pay $23 for a bag and here it is typically $4 a gallon of milk. If I were to feed my bottle babies store bought milk I would need just over three gallons for one day and my 8 goats are 8 weeks old getting 2 20oz bottles a day. I could buy only two days worth of milk for what I pay to feed them for 5.5 days with the formula.

But, I want you to keep in mind that my goats are fairly underweight. But they had been diagnosed with a high level of worms and coccidiosis about 25 days ago. I’m thinking they are underweight because of the parasites. But, I can’t deny there may be a possibility I’m underfeeding them, or they haven’t been fed the right stuff by me. I’m really new at goats. 8 weeks today. They were babies, one of which was 12 hours old.

But I use Manna Pro’s Advance Multi Species milk replacer. I’ve tried only one other brand. My goats love this far more than they did the other stuff from Land O Lakes. They wouldn’t even finish a bottle of that stuff. I’ll enclose the back label information. Maybe someone else can tell you if this a decent milk replacer or not. I’ve had luck with it though. 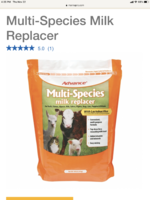 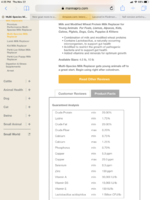 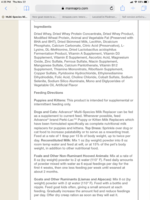