Adding photos of the replacer I'm using just in case and she doesn't sound stuffy this morning yay! She's still a lil runny but I'll take what I can get 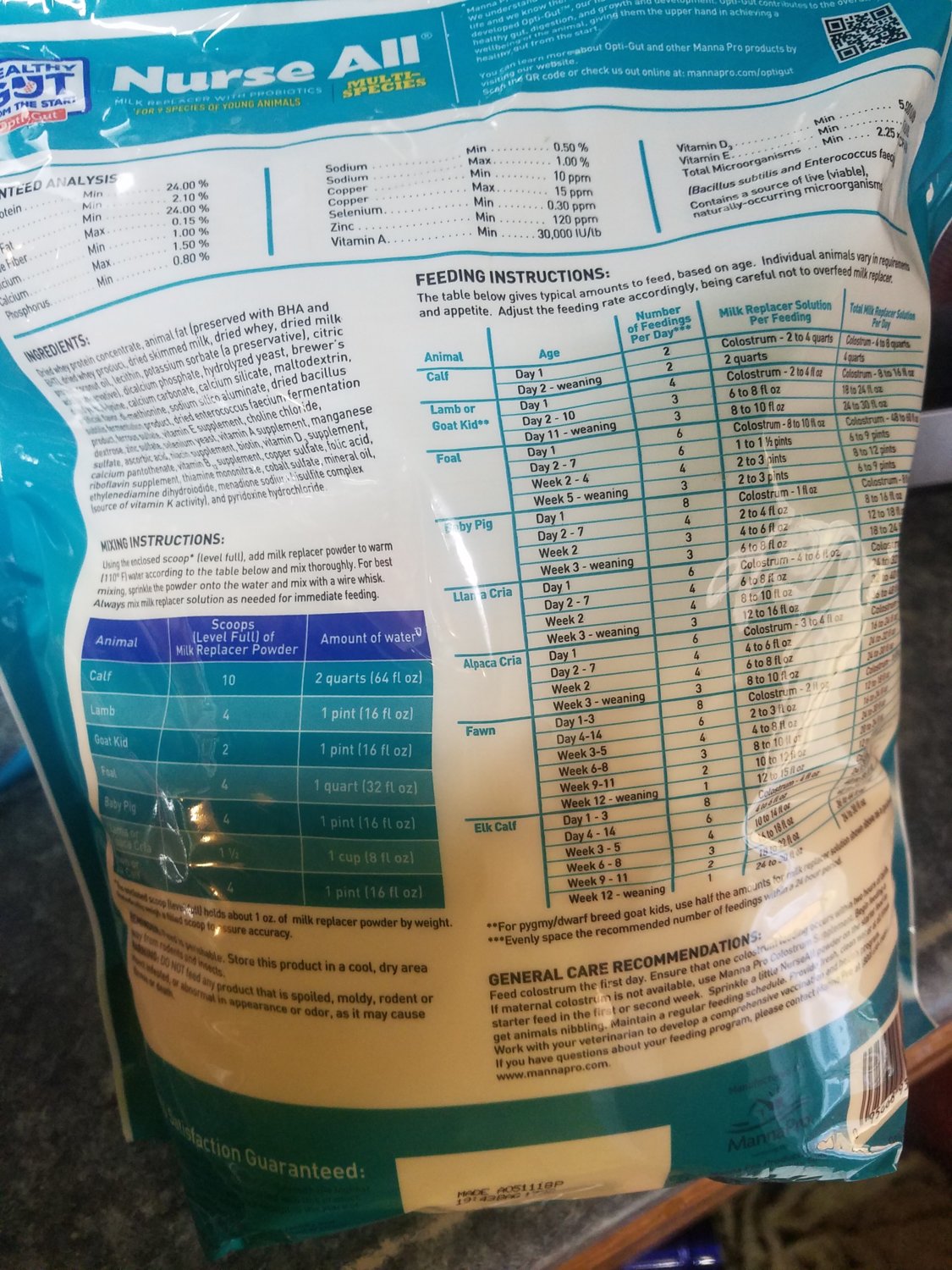 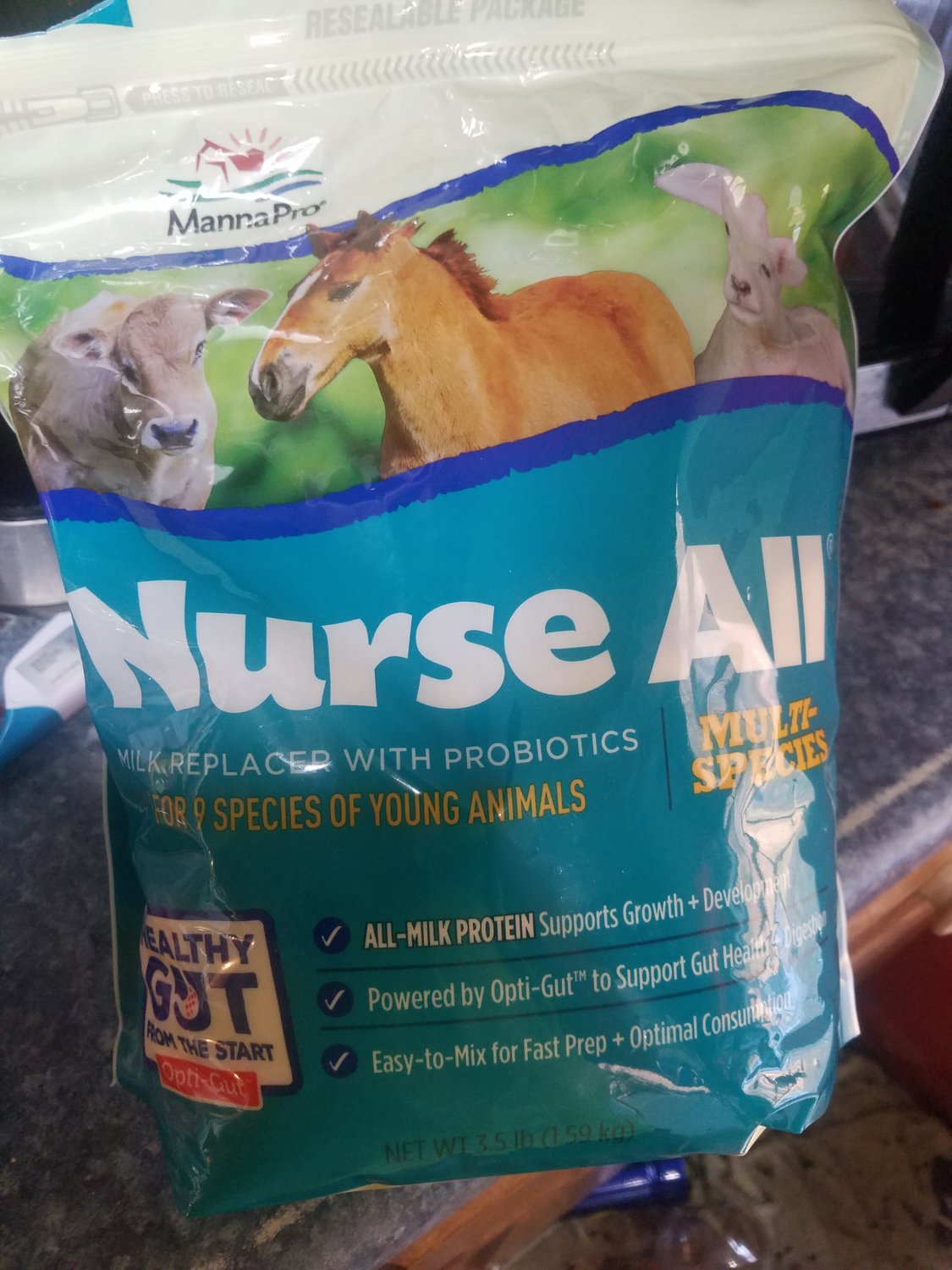 I see that the milk you have is all milk protein, that is much better then if it were soy based. I honestly think she should do okay on that stuff. I know it's debatable though. It would have been much better if was made for goat kids specifically, but you already bought it and to me, it seems like a waste not to use it. It's good she doesn't have a stuffy nose anymore! Maybe she takes breaks because she can't get milk and uses all her energy trying to drink and the hole is too small. Maybe try opening it ever so slightly more and see if that helps. I like to see my bottle drip when I hold it upside down. I don't want it to pour out, just drip every couple seconds. Does she try and bump the bottle when she is feeding?

It does drip without me cutting any of the nipple that's why I was afraid to and every once in a while she will bump not very often though. But she acts like she is starving today she has ate 6 ounces since 5.30 this morning it's only 9.20 here now so I'm thinking maybe the 2-3 oz she has been eating wasn't enough an maybe her mom's milk wasn't strong enough for her? Edited yo add I check her belly before every feeding to make sure it is tight

Well, at least she is eating much better. Hopefully, she does well. Just really make sure not to overfeed.

IMHO, from what I can see/read on the label, the amounts to feed per feeding based on age as well as total amounts per day are wrong/too low/not enough for a goat kid. I have limited experience with bottle babies (BB) having only had one to date. The one that I did have, I used a 28oz plastic coke bottle and warmed the liquid up by setting the bottle in very hot tap water until it was in the 100°f range. Since the doe was producing plenty of milk, I used it to feed the BB. I let the baby drink as much as she wanted. when she stopped, I'd wait a bit and offer her the bottle a couple more times to make sure she was really done and not just taking a break to let the milk settle. For the first week or so I did 4 feedings a day. For the 2nd week I fed 3x/day and after that, 2x/day. She is a full sized Lamancha and by a week of age she was drinking 8-10oz per feeding. By 3 weeks, IIRC, she was emptying the bottle on many feedings. After 6 weeks, I stopped heating the bottles and just did straight from the pail after milking mom or right from the fridge. I continued to offer her a bottle x2/day until ~5 months of age. Mostly because it had become habit, also because we both enjoyed it. At weaning time she dropped to one bottle in the morning for a few days and then no more. By then she was eating pellets and hay as well as forage along with all the other goats and didn't really need the bottle anymore in any case. Weaning for smaller breeds is generally acceptable at ~8 weeks but it's always good if they can get that rich milk for a longer period. If she were dam raised, some dams allow their kids to nurse for 6-8 months and longer. I have one kid right now who still suckles off mom every now and again and that kid was born back in April... 7 months ago.

There is always contradictory information and you have to decide which way you want to go based on what you are experiencing. Some kids do great on milk replacer, others not so hot. Most concur that soy based products are not good/do not work as well as milk protein based products, and should be avoided. Some kids will take a bottle and still nurse some off mom, other kids will only go with one or the other but not both. Some kids once nursing off mom, will never accept a bottle. Some kids who are started on a bottle will no longer nurse off mom, or mom will no longer let them nurse as their poop doesn't smell of their milk. Moms will generally clean babies butt while they nurse and can smell if the kid has been drinking their milk or another doe's so can ID their kids via smell. There will be an adjustment period as the kid adapts to the new taste/texture of whatever you're feeding it.

I'm sure the nipple is fine if it's dripping when you invert it. Since you already have the replacer and have started using it, I would continue to do so until you are getting ready to run out. Then start mixing in regular store bought whole milk until you've switched over completely and then stay with that till weaning.

Danielle89 said:
Oh what your seeing on the feeding chart it means day 11 through the weaning process
Click to expand...

Ah, that make much more sense. Sorry, been a bit sleep deprived for the last weeks and can't really think straight! Latestarter gave you some good info. Giving it straight from the fridge/mom. That's a new one, I'll have to try that next year!

Quick update this am, I ended up making the hole in one of her nipple just a little bigger and she seems to nurse easier without taking breaks and she's actually eating more? So I think she was getting tired before she was getting full. I had my hubs help me re splint her leg she kept pulling it off when I would do it by myself lol. She back to following me through the house and if I get out of sight an she's awake she hollars and hunts me lol. I have a new problem! the bottle babies momma has stopped letting her brother nurse and I have no clue why

StarSpangledNubians said:
Ah, that make much more sense. Sorry, been a bit sleep deprived for the last weeks and can't really think straight! Latestarter gave you some good info. Giving it straight from the fridge/mom. That's a new one, I'll have to try that next year!
Click to expand...