@Bruce All right, y'all are forgiven!

So this is an exchange between my ex and I this morning. I got a kick out of it and thought yall might as well. 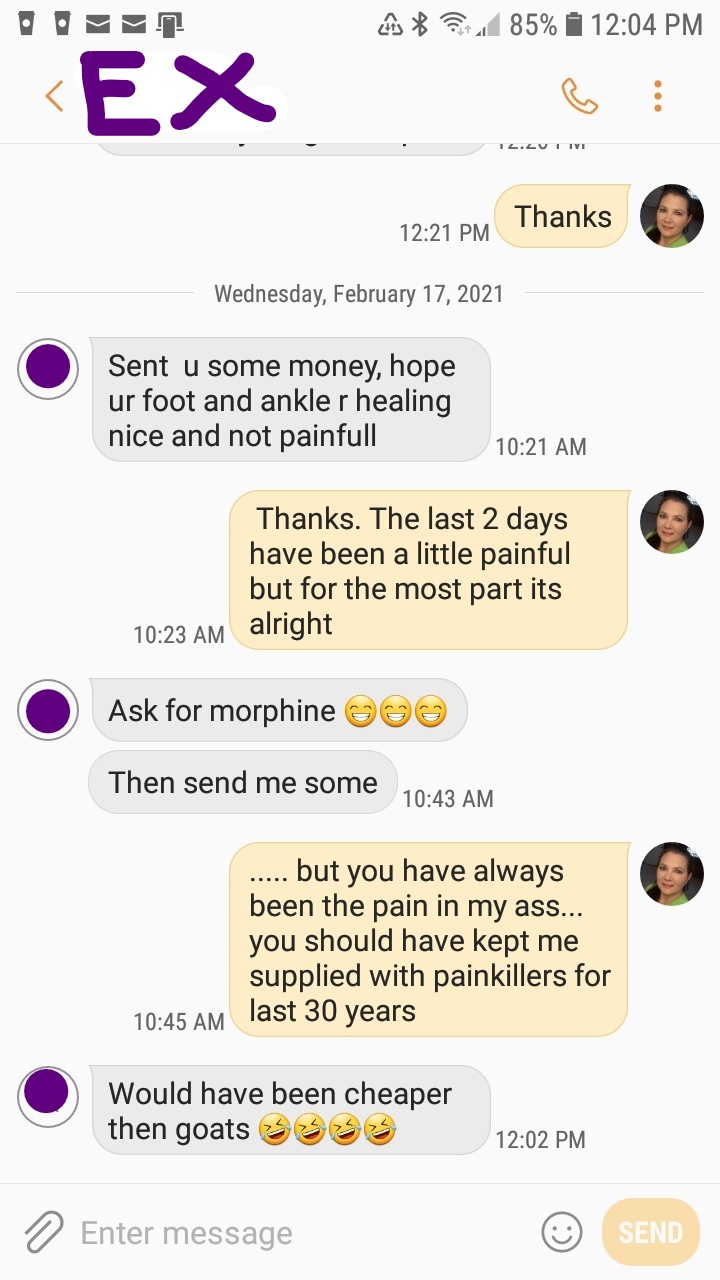 Still carrying your sense of humor!!!

That is hilarious, ROTFLMAO

I guess it wasnt my funny bone that broke.

Had my cast changed today, rads redone. Bone is starting to remodel! Yoohoo! Recheck in another 3 weeks.

My sons friend filled in as our emergency chauffer again today. Thankful my kid has such sweet friends. The appointment took us 3 hours today and he is also going to run us around on a couple errands tomorrow since my BFF is unavailable due to family issues at the moment. So Grateful!

I didnt ask why, but my son decided he wanted Karma to stay inside this morning. After the dogs 'lunchbreak' I suggested he take her out to work. He said to her "Hey Karma you wanna go out to work?" She looked at him gave the smallest almost-woof and went into her crate and laid down. I just laughed and we agreed that that was a nice polite request to stay in so in she stayed. Normally she will hit the front doorknob, ring the bells on the back door and just keep asking to go out to work. I guess today was her day off. Cant argue with that since we all need a break sometimes. She is one smart cookie!

Anyone in need of a trio of obnoxious kittens? Very cute, healthy and full of spunk. All 3 have honed their special skills as follows:
Most competent at knocking the power cord to the internet router completely out of the wall at the most critical of times, namely in the middle of an important Skype call or Zoom CE certification meeting that you need to renew your license to continue to practice medicine in this state and therefore necessary to continue working and earning enough money to feed them
Next they excel at biting and attacking toes, in socks or bare are acceptable, but they prefer to attack the toes that are exposed on the far side of your cast... the same ones that are just barely reachable so swatting or shoeing them away is nearly impossible.. and of course it should go without saying that in the case you are actually able to dissuade the toe biting, they will happily switch to grabbing and 'fighting' the cast itself
Lastly they are all equally competent at retrieving and dragging to the middle of the room, the 'emergency cat toy fishing pole', out from beneath the couch cushions so it is thoroughly out of reach when you need it for the purpose of ensuring that all of the above mentioned kittens are out from under the recliner so they don't get squished when nature calls and you want to get up
So, if anyone finds themselves short on a supply of irritating but 'oh so cute little minions' to keep them on their toes, (and admittedly entertained) come directly to my house, I have more than enough to spare!

Sorry RDCL, it is a bit too far for me. Plus we already have 3 cats that, at best, tolerate each other.

My funny kid sent me this today 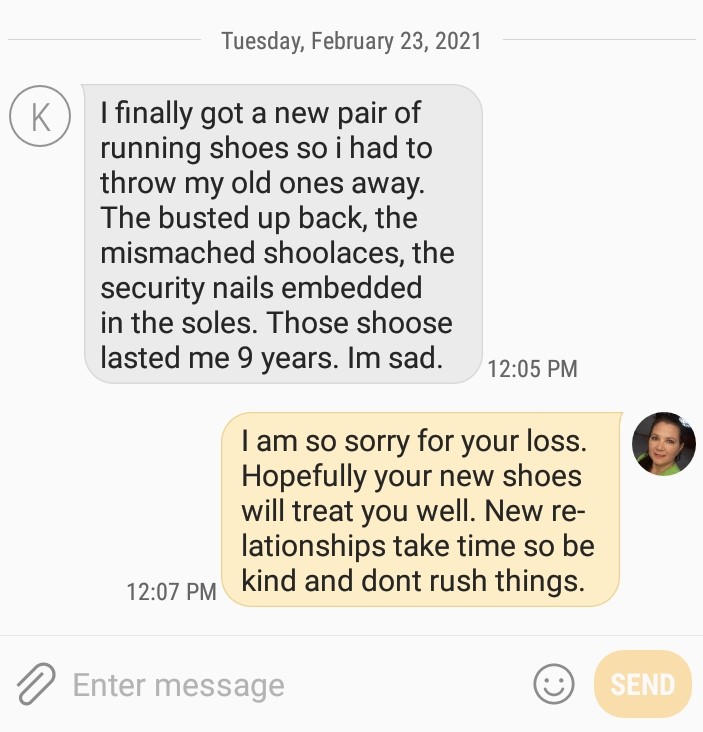 Had a 5 am wake up from Karma giving some light "woofs" indicating something was off (not her "I'll kill em-there's a human nearby", just a "something isnt right" kind of sound). She was sleeping in her kennel in the front room so sometimes she will tell us of something going on at a neighbors, but she is getting better at learning that we dont want that kind of info. Turns out OtterPop, one of my kittens, had snuck out before bedtime and was desperately knocking on the windows to the front rooms, trying to get in. Between my geese making an unusual alarm outside my bedroom, and Karmas voicing her concerns, I hobbled out of bed on my crutches and met my son to sort out the issue. He went out, caught the kid and we hustled back to bed. OtterPop ran in and popped a poop in the litterbox (apparently he was unaware that dirt is an appropriate litter material when one is outside! LOL), grabbed some kitty crunchies and rushed to my bed where he cuddled up and started purring only to pass out hard under the covers within just a couple minutes.

Then the next night we had a 12 am wake up call from Karma but it was her "Ill kill em" alarm. Coming to quickly due to the urgency of the call, I was sorting out the sounds from a few doors down, of voices and angry neighboring guardian dogs going off at a really fierce level. My kid initially thought the voices were calling for lost child but due to the yelling and whistling, we concluded that it seemed more likely they were searching for a dog. Of course we were officially wide awake at that point and I was prepared to call authorities had the strangers remained in the vicinity, but by the time I was lucid and present on the porch, it appeared they had moved down the road. I could still hear them for about 20 minutes and the whole neighborhood 'canine protection squad' was still riled up for a long while. Rude way to wake up, but good job Karma. That was something we really needed to be alerted to even if was a few doors down. Just in case.

Alas.... even though I have every opportunity to catch up on my beauty sleep at my leisure these days, I still ended up sleeping until about 8:30 this morning, and then laying in bed until 9. That is when DS1 popped in to peek that I was Ok, Doodles, Baux Jangles, Skyler, OtterPop and Plank all came crowding in to find out why I wasnt parked in the living room yet. Feels good to know I am the life of the party somewhere!