Bay is right! We can deal with regular ho hum life, no need to do something extraordinary.

Baymule said:
You know, you can check in any time.......... you don't have to break a leg or dang nigh set the house on fire. Just sayin'

Oh good, I figured y'all only wanted to hear the juicy stuff!

My regular life has been pretty consistent, current excitement excepted.... giggling alot at dumb kittens falling out of the christmas tree... still. Was gonna take it down this weekend. We decorated it exclusively with cat toys and bells just for them so we did leave it up later on purpose. I did put one string of lights just so I could light it a few hours to really feel like christmas and our traditional angel had to perch on top of course. DS1 and i witnessed Otterpop up at the top of the tree smacking the angel a couple of times so that was pretty entertaining.

Training Karma is coming along well. She is really sweet, a little bit stubborn, loves the goats, but she isnt very good at 'reading' their body language to understand their comfort level and she moves too fast for the ones that are still nervous about her. She is as tall as some of them. She is pretty good with the cats, but Skye sometimes gets mad at her just for looking at him or standing near him and will stand up on his hind legs to smack and yell at her. sometimes she walks away slowly, sometimes she just looks at him and does nothing. He is such a princess. She absolutely loves DS1. I have several pics of her sitting on his lap or laying on him. She did scare and hurt him once, when she launched over the coffee table on top of him... from a standing position, with no warning. Cleared 3-4 feet of air. Surely left a bruise on his liver and scared the bejeezus out of both of us as we were NOT expecting it. and she literally as big as he is. He still loves her though. she is really an awesome dog. She didnt get to see me before I went to bed the other night so the crutches and me hobbling in the dark scared her. She is unsure of the crutches, but knows that its me now. This morning when DS1 came to take all the dogs out to feed them and let them go potty, Karma snuck back to my room and snuggled partly onto my bed to give me kisses and snuggles. 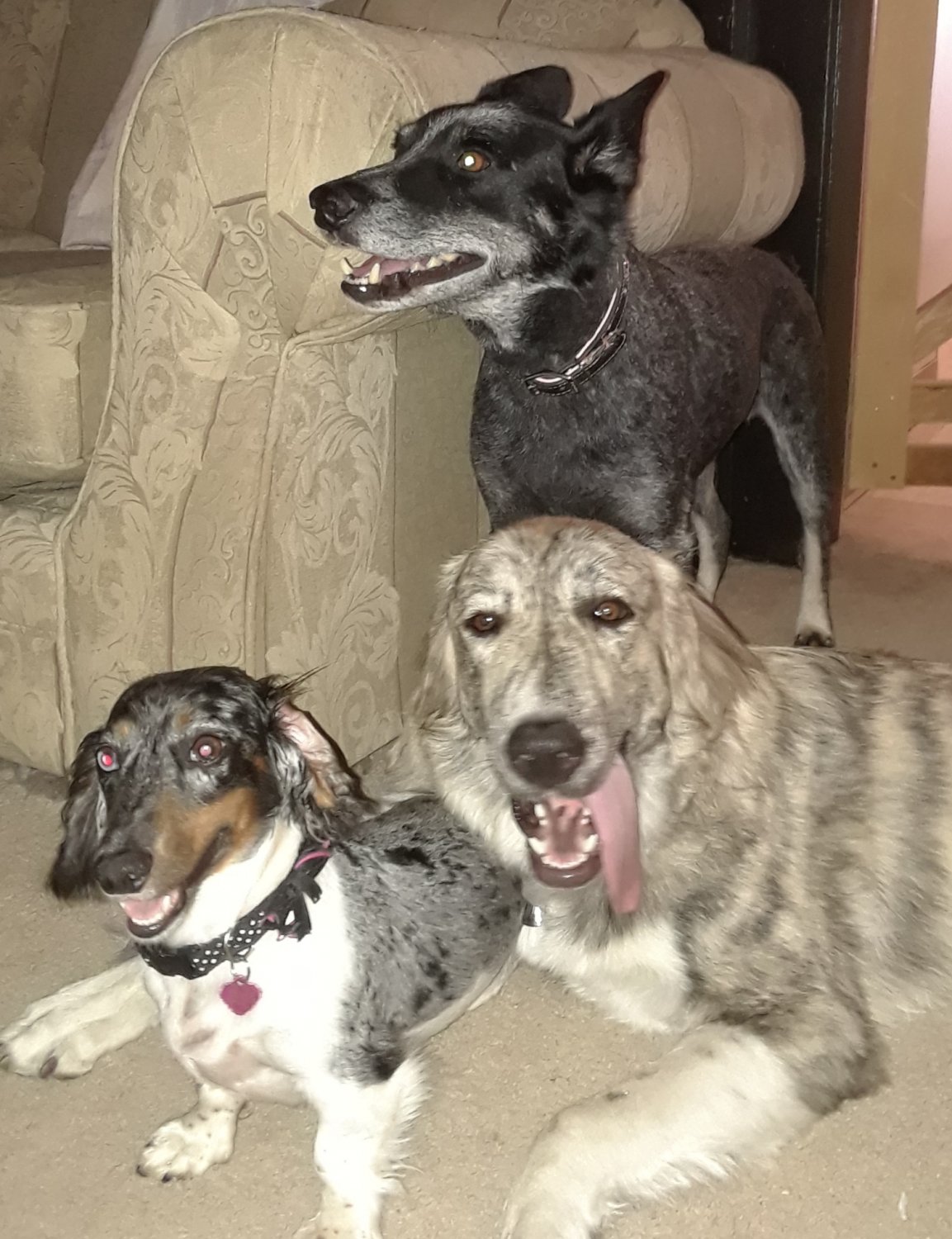 Karma and OtterPop when he was about a month old 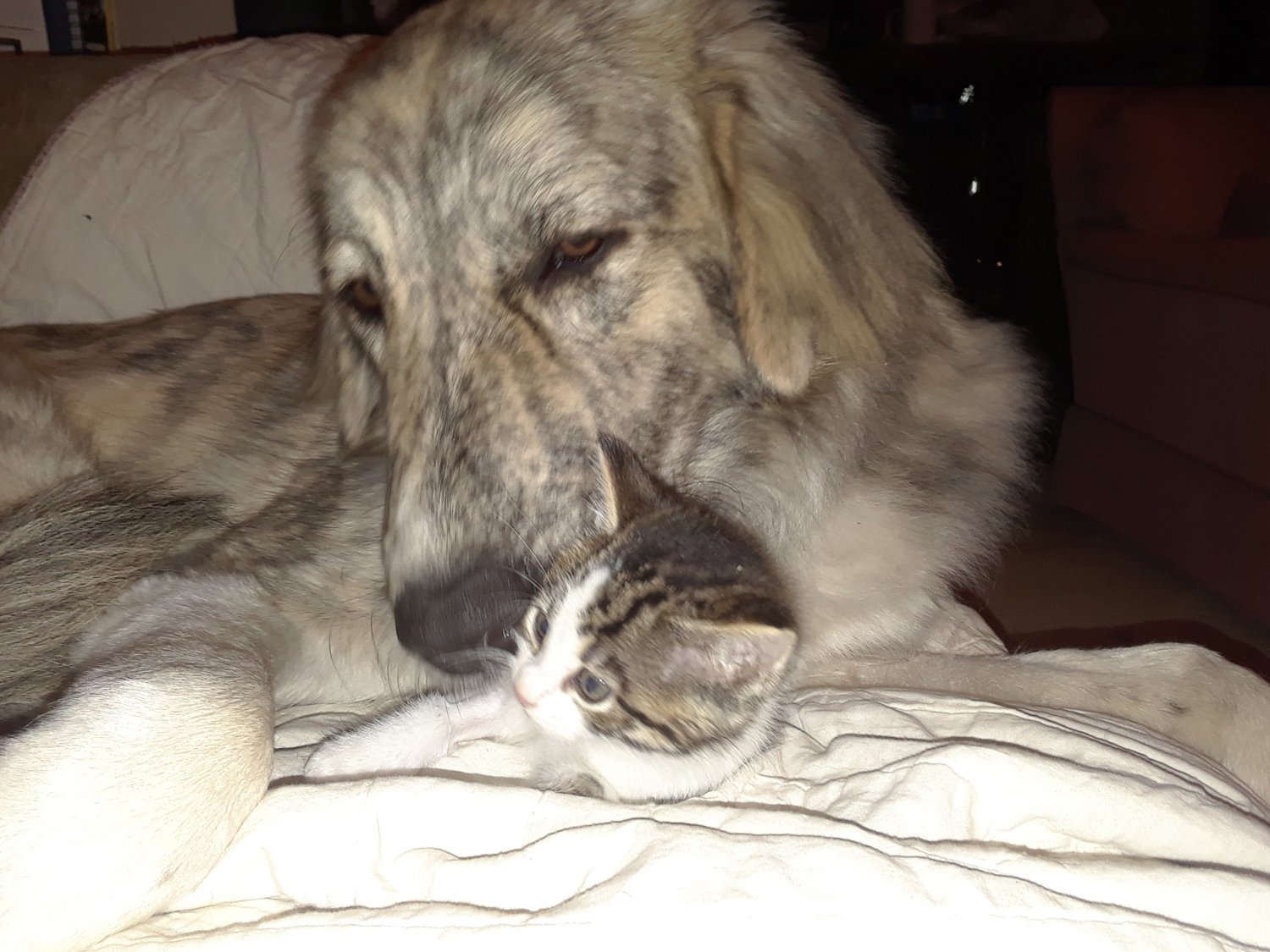 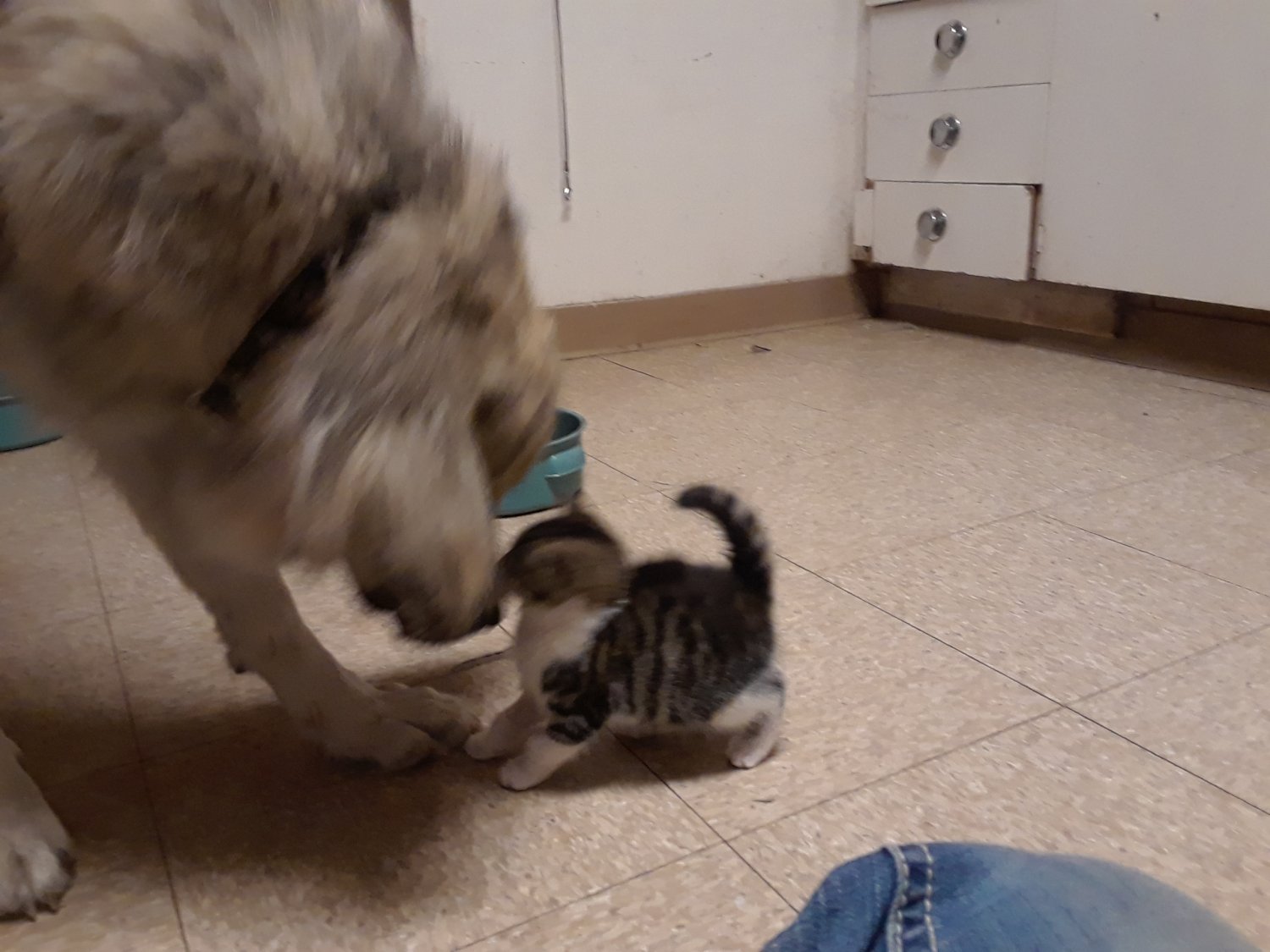 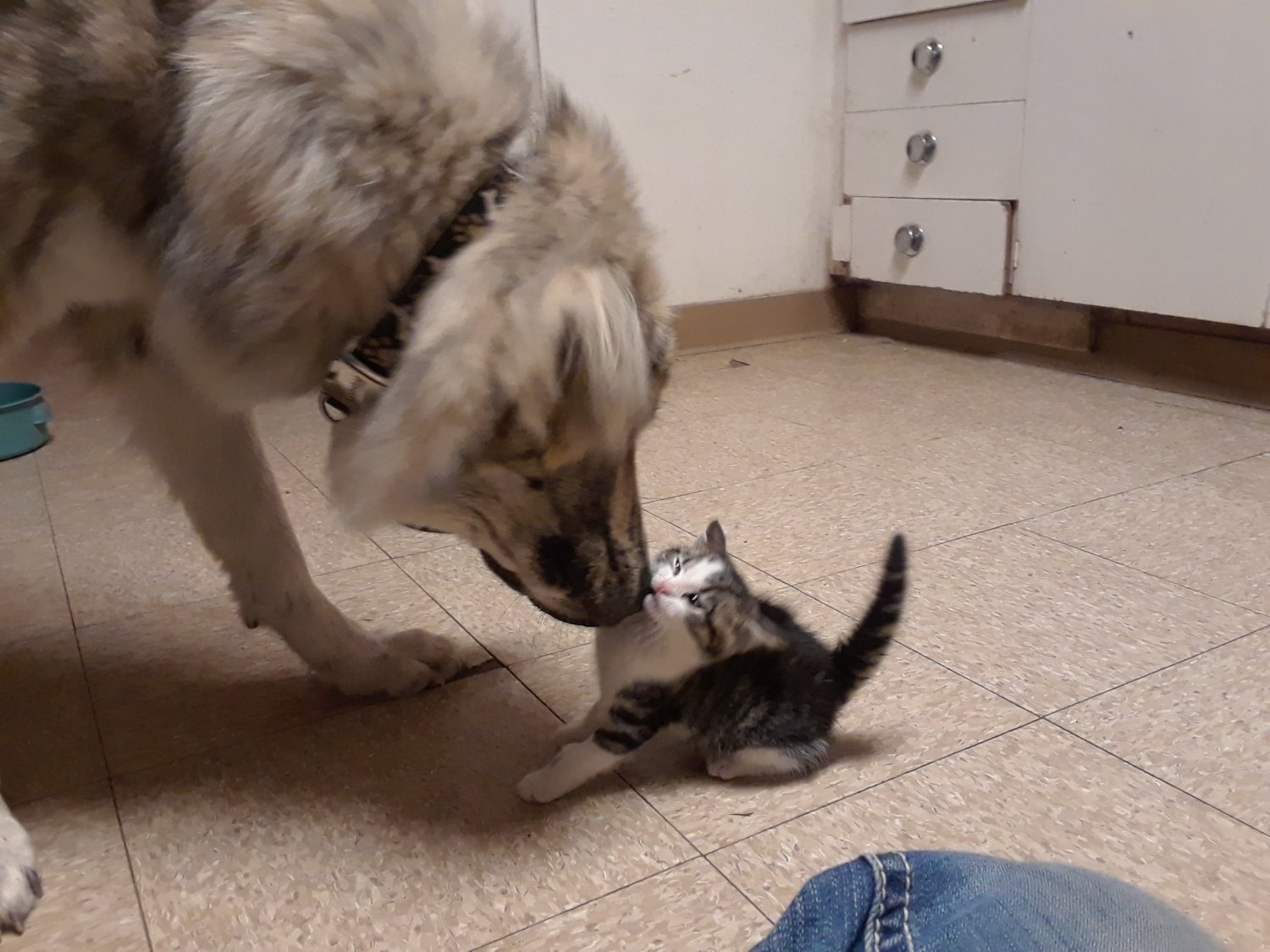 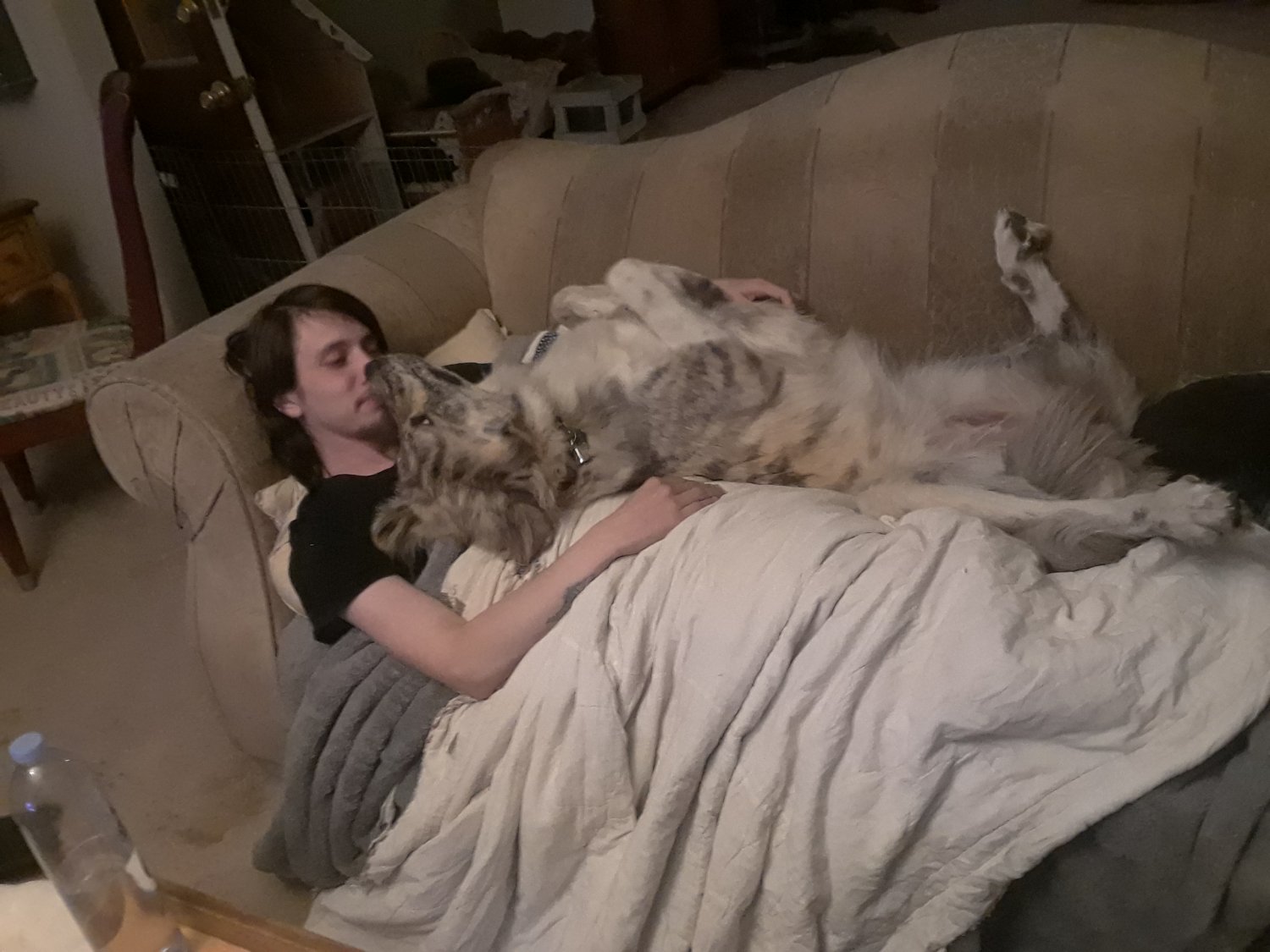 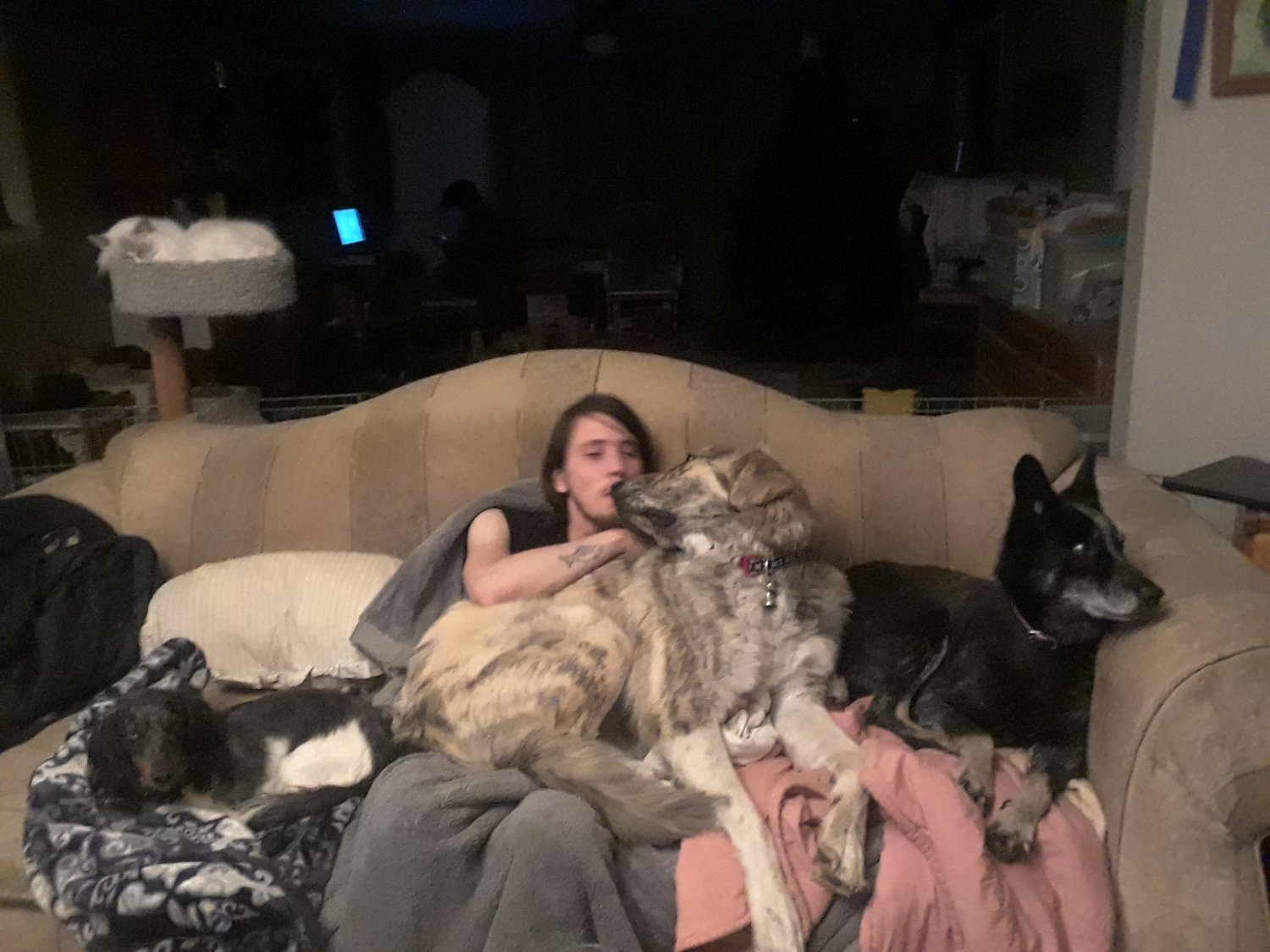 ragdollcatlady said:
but Skye sometimes gets mad at her just for looking at him
Click to expand...

Finally, the time I spent training Beaux Jangles 10 years ago, to pick up and fetch items and trash, is paying off. He brought me the PS controller from the TV stand, picked up the TV remote 3 times after I dropped it and couldnt reach it (I havent used the remote for 7-8 years, but we resurrected it after I got broken) and now we are trying to teach Doodles the same. Beaux is pretty good at bringing you whatever you ask for as long as you say "thats it" at the exact moment he is looking at it. Sometimes we have a little bit of miscommunication. Doodles is still in the part of learning where she has learned to 'steal' the item Beaux has, in order to redeem it for a treat. It seems to be a natural learning process as Sir Leaks Alot also learned to bring us items using the same methods. Beaux is such a good pack member, he allows the other dogs to take the items since he still gets a reward for it, regardless of who actually hands it to us. Funny thing is, when Doodles brings me a kitchen towel, she will stand/hop up on her back legs and stuff the towel into my hand, only to accidentally pull it out of my grasp as her front legs fall to the ground, catching the towel in the process. Short dog/T-rex problems! LOL! She also got a bit confused about bringing the remote to me and was dropping it off on the other couch for a bit. We are working on it.

Feeling kinda girly... first time painting my toenails in years. Good thing purple was one of the 2 colors I had! 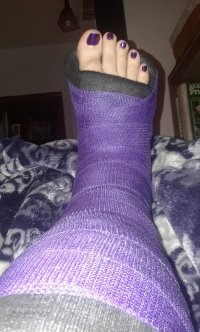 Today my boys helped me retrieve a couple of furniture items from a neighbor.... I have a new dresser turned TV stand and I am now chillin in my new/used recliner. Had some pain the last 2 days and some swelling. The new recliner is more comfortable, hopefully that will make it easier to keep my foot up.

You can actually bend things enough to reach your toes?

Keep getting better! I hope the recliner helps out.

Bruce said:
You can actually bend things enough to reach your toes?
Click to expand...

Well.... maybe Im not a spring chicken, but I am not old enough to have rigor mortis yet either!

LOL! (The swelling around me knee had been minimal that day so I was able to swing it if I held my breath for each brush stroke )