Does your tractor have a backhoe?
I would think the stump bucket would be fine for taking out small trees. Rip on the sides to break the roots same as you would with a backhoe or excavator. If you cut any maybe leave a few feet of stump to get some mechanical advantage for pushing against?

I'm sure you've been watching OTWM, Mike removing all those trees with the big excavator he rented. I'm surprised that there isn't all that much in the way of tap roots and I think he's pushed over 6 different species - cherry, ash, walnut, maple, elm, oak. None had a big tap root.

Bruce said:
I'm surprised that there isn't all that much in the way of tap roots and I think he's pushed over 6 different species - cherry, ash, walnut, maple, elm, oak. None had a big tap root.
Click to expand...

Trees don't keep their tap roots once they begin to mature. They develop the buttress roots, and surface water gathering roots.

Bruce said:
Does your tractor have a backhoe?
Click to expand...

No. That was one expense I could not see paying for itself. Maybe if I had one I would decide that it would be well worth the money. I certainly got a good bit of use from the mini excavator I twice rented, although the second rental was almost exclusively for digging up and then tearing up my water supply line!

Renting a mini ex for digging out those stumps is also an option Figure out (and mark those stumps) what projects you can use it for, do a "I need good weather the week of ..." dance and get the most for your rental money.

Can you get some of those flags that are on a pole several feet tall like they use for go carts and use them to mark the location of the stumps until you can remove them? That way you can mow around those spots and not hit the stumps?

Thanks STA for not minding me posting my stuff - I am copying and reposting it on my Ridgetop site as well, along with more follow up on other stuff.

Many times people with certain problems are so borderline as to escape diagnosis. DD2 was adopted by us at age 14, 1 year after her 2nd adoptive mother , my cousin, died of cancer and her 2nd adoptive father decided to shove her into foster care. She has Fetal Alcohol Syndrome which was never diagnosed, and absence seizures. (She was punished for having these "space out" type seizures as "not paying attention or ignoring her parents. After she came to us, it took 2 years of testing, changes to 3 different neurologists, and a 3 day stay in Children's Hospital hooked up to a brain wave machine to finally get her seizures identified and diagnosed. She also spent 4 years in counselling for her previous 14 years of sexual and physical abuse when we learned about those experiences. All experiences I will talk about in the Ridgetop postings instead of here.

Often, as you learned, self diagnosis is really necessary after reading the symptoms and applying them to your ownlife experiences. Kudos to you and your Beautiful Gal for not giving up on your marriage and finding the cause of your behavorial experiences.

On Thursday I ordered one of the slip clutches I mentioned in an earlier post, namely this one: 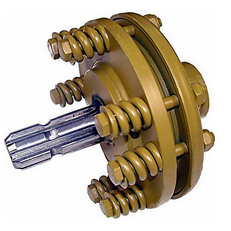 It arrived late Friday and Tractor Supply delivered it directly to my house. Probably less than 5 minutes after the guy left I opened it up to see what it looked like and if it might fit. Much to my surprise, there were two different stickers on the clutch, one of which read "Implement side only" and the other of which showed a tractor with the circle and slash through it, meaning (I assumed) not to attach to the PTO spline on the tractor. Nowhere on the web page was this stated. Since I could not use this particular clutch on the mower side, on Saturday I returned the clutch for a refund.

I have reached the 95 hour mark on the tractor, so I will be doing the 100 hour service some time soon (probably today).

Very sad!!!! What do they expect it to be attached to if not the tractor's PTO?

Yesterday, I decided to burn the 3 remaining brush piles I had. Two of them burned just fine, but the 3rd burned slowly and not nearly completely. Oh, well, I expect to have plenty more brush to burn once I finish cleaning things up for the year. I also had delivered two loads of road material, 1 of crushed concrete and 1 of slag. I plan on putting down the slag near the creek once the weather gets nicer (it's raining here today). I used a small portion of the crushed concrete as filler for the drainage ditch I dug early this year to make a french drain for that area. I put down landscaping fabric, PVC pipe with holes drilled near the bottom to allow water to enter and drain off, then the crushed concrete, then more landscape fabric, then dirt and grass. We'll see how well it works. Of course, dummy me didn't think to take before pictures, so the after pictures wouldn't do much good. If there are no pictures to prove work is done, did it really get done?

I think now that I have used the tractor for a little over a month, I will give my impressions:

Good:
+ enclosed cab. That A/C is nice. Instead of being soaked in sweat and dust at the end of the day, I feel relatively nice.
+ engine power. A few times now I have done chores that my previous tractor could not, such as pulling a large tree truck from the tree that blew down early this year to the burn pile.
+ loader lift capacity and frame. I knew that the bridge I built to replace the narrow one over the ditch between the southern-most hayed pasture to the overgrown area would have been too heavy for my older tractor to lift. But this tractor had no problems at all.
+ high ground clearance and better underside protection. Bushes and small trees that I went over in my older tractor would often tear wires loose from underneath it. They are what bent the oil filler tube that caused the loss of oil that in turn ruined the engine. This tractor has much better protection.
+ level bucket indicator. This indicates when the bucket is level or not.
+ self leveling loader. This is great for material handling, such as when using pallet forks, bale spears, etc. What this means is that raising and lowering the front end loader does not alter the angle of the bucket or other attachment relative to the ground. Thus, if you pick up a hay bale using the bale spear or a pallet using the pallet forks and then raise the loader up a considerable distance, the load remains level, instead of tilting back.

Bad:
+ enclosed cab. In the few times I have wanted to go near or among trees, the cab has both protected me from limbs and has also gotten beat up by them. Overall I still would prefer the cab, but it is a drawback in or near trees and bushes.
+ self leveling loader. The problem with the self leveling loader not tilting back prevents me from using my tree shear like I would like. Formerly, if I wanted to reach up high with the tree shear to cut off limbs, on my older tractor actually tilting back was a good thing, allowing me to reach higher than I can with the new tractor.
+ flaky SSQA plate and attachment angle. Both my grapple and tree shear are prone to detach from the adaptor on the tractor. I thus must be "gentle" with them. I never had that problem with my previous tractor. Also, the angle of the SSQA adapter plate is such when the level bucket indicator indicates "level", both the grapple and tree shear are pointed down about 20° or so. I then must use a portion of the curl travel simply to level those attachments. Couple that with the self leveling bucket, and a good portion of the usibility of the two attachments is reduced.
+ poor visibility for hooking up SSQA attachments. The same frames and cover that give the front end loader its strength also makes hooking up attachments really hard, as I am unable to see the attachment plates and how they are lining up to the attachment points. Currently I can only see the attachment plates if I rise out of the tractor seat and lean way over to the left or right. If I rise up, the tractor thinks the seat is unoccupied and then kills the engine. Thus, I have to approach the attachment, put the tractor in neutral and set the parking break, rise up off the seat to look, then sit back down and release the parking brake and engage the clutch, move a bit, then repeat. Alternatively, I will set the brake and get out of the cab to look. Either way, what formerly took 1-2 minutes before now takes up to 10 minutes.
+ unable to "feather" the clutch. I expect that this will improve as the tractor breaks in, but currently I am unable to feather the clutch, i.e., partially engage the clutch so that I move slowly, such as when approaching attachments. Instead, the clutch is either fully engaged or fully disengaged. It makes for an "interesting" experience when needing to move VERY slowly and tentatively.

So overall I am happy with the tractor, but it certainly has its quirks.

Given all the goodies it already has, could you put a camera on the hood or loader so you could see the SSQA parts?
And the dealer gave up on the SSQA problems?

I gather there is no way to disengage the self leveling loader?

Guess I have no ideas for the clutch problem. That is an advantage with the hydro. My tractor has one of those rocker pedals for forward/reverse and the brake pedal is also on the right. I think that is a superb design. I can stand and use both pedals with my right foot for "creeping" to attach either in the front or back.
You must log in or register to reply here.
Share:
Reddit Pinterest Tumblr WhatsApp Email Link