Yes. It's what I started her in with the idea I would graduate her to a snaffle, but she's proving to be so soft in it that there's no real reason to bit her. Except I bought a beautiful bridle a year ago that would be be lovely on her (sunflowers, so matches my saddle

).
I was riding with a friend and we had a conversation about bridles/sidepulls.
I told her it was a shame to not use the glammy bridle because I loved the sunflowers on it. She thinks I'm nuts. She said she would paint sunflowers on the sidepull if that would keep me happy!

She's a talented artist. It was a joke but maybe I should hold her to it, haha. 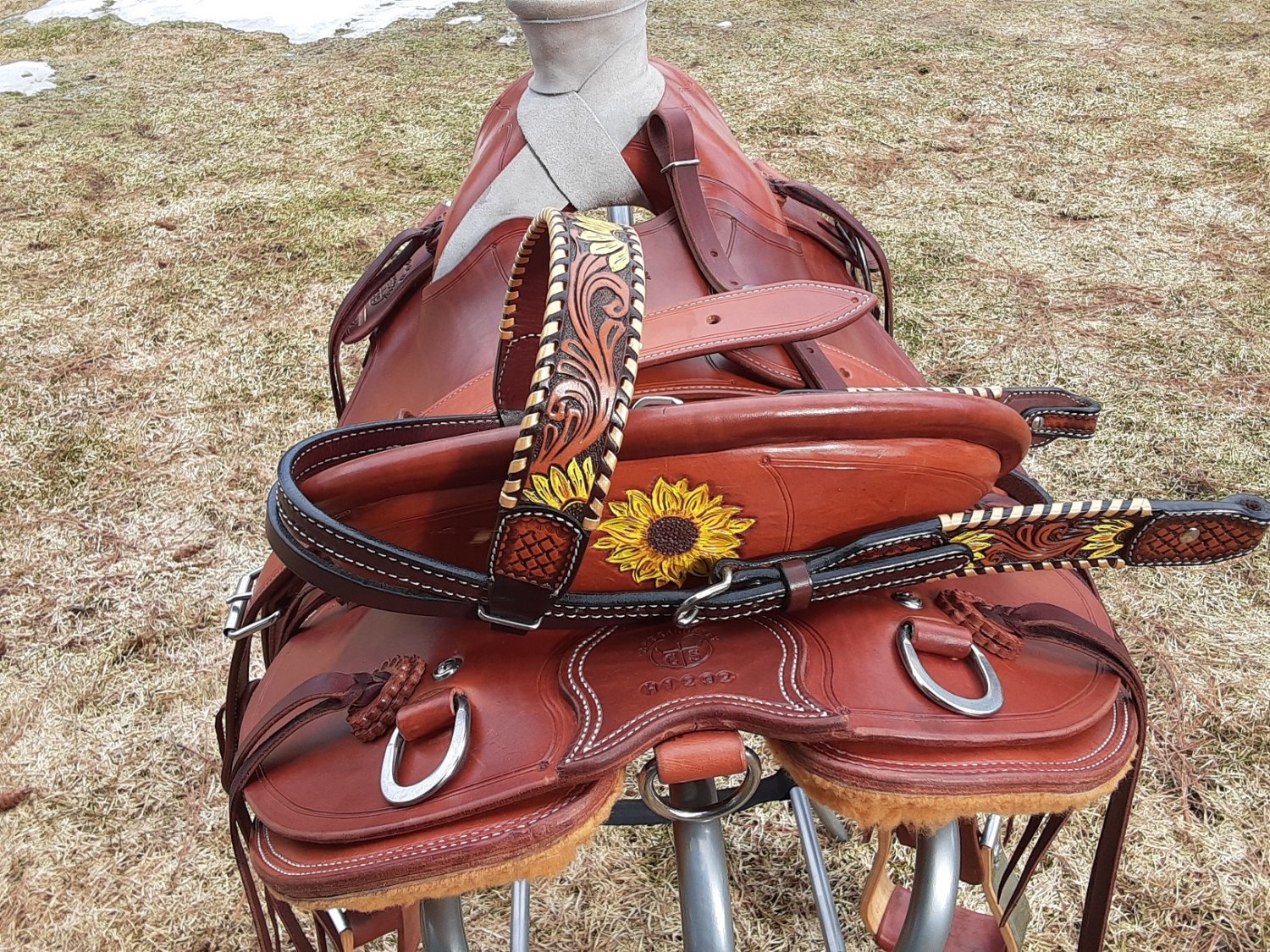 Okay, looking at the side pull and th headstall with the sunflowers.... why can't you reconfigure the headstall a little bit and convert it? Where you would attach the bit of your choice, put in a ring and add a nose piece and a chin strap, and the reins.... add a couple of holes in the headstall so you can shorten the side length since the top is not decorated you will not get it out of "eveness" on each side..... I think that you could play with it a bit and get it adapted quite well... maybe even get a "saddlemaker/leatherworker" to make a few adaptations....
I used a mechanical hackamore on a mare that was a little stubborn but who fought the bit terrible....Kept her from getting a hard mouth and she was a dream to ride with it. Always preferred to not have to put a bit in a horses mouth if I could achieve control/cooperation with out one.

I considered converting the bridle... but not seriously enough to actually see how to make it work. But thanks for reigniting that idea @farmerjan ! I'll have to play around with it. I don't mind sacrificing the sidepull for parts, but would like to keep the bridle intact enough that I could use a bit if the need ever arose. I do think it's possible...

That and my saddle are the most money I've ever spent on tack. Probably combined, in my lifetime!

I have a $25 horse and a 2K $ saddle. But she's priceless to me, and the saddle was custom, I looked at a lot of used ones that were almost that much.
It's getting a lot of use, that's for sure!
F

Ask the saddle maker, since it was custom, if he has any ideas.... or a boot maker or even a shoe maker/cobbler... someone that works with leather... better if they have horse tack knowledge. I really think that it is very doable....The places on the end where you would ordinarily attach the bit should be able to just attach a single ring on each side and then add nose piece and chin strap like is on the side pull... I really think that it would not be a big deal and would still allow the headstall to be changed back easily. The side buckle would have to go up higher... make a few more holes in the non buckle piece over her head to raise the whole thing higher on her head to let the nose piece and chin strap fit where it should. You would not have to sacrifice the side pull for parts if you didn't want to.... get a separate noseband, and chin strap that can be put on a simple circle ring. I think that if you sat down with them side by side, you could figure out how to make it work... there are enough tack suppliers around that you could find a nose piece and chin strap to match the existing headstall..... they get broken and even worn thin, so I know that people replace them....

Baymule said:
Your fire starter should be sterilized so he doesn’t breed his stupidity. LOL
Click to expand...

Probably too late for that, just like the people that started the fire in California with their stupid "gender reveal" party.

Check out twohorsetack.com they make a side pull attachment. They can customize about anything

The Bobcat fire in CA is now 61% controlled but the weather report calls for high winds this week so . . . .

Too many fires.
Kid#1's crew have been sticking pretty close to base to get after all the lightening fires. He's hoping the recent rains have helped enough that they can get on the road to more distant locations. Our very local fires are now out or nearly so.

Went for a nice fall ride in the park yesterday. It was sunny and fresh after the thunderstorm that rolled through Friday. It was busy there with 10 trailers in the parking field. The great thing about that state park is that there is such a network of trails on the horse side that you can ride for a couple of hours even when it's busy and sometimes you never run into another rider.

That was not the case for me a week ago. It was funny actually...
I had just unloaded Syringa from the trailer when a group of 5 women came back to their trailers. We all said hi and then one of them realized at the same time I did that she and I had met a few weeks before at a high line demo at her ranch. She rides in the Cascades every summer and had invited my neighbor and I to come along next July, which I am TOTALLY up for! We all yakked horse for several minutes , then they went to unsaddle.

Then Syringa and I were moving out at a brisk trot down a single track when I saw a lady walking her dogs ahead of us. We slowed to a walk, said hello and a few pleasantries. This gal is there all the time on the trails, I bet she doesn't miss a day. As I was riding away she asked about my saddle, so we talked quite a bit more. She rides also, seems to be a very knowledgeable horsewoman. She was fun to talk with and we parted again.

A few miles later we saw some bike riders ahead and moved off the trail at a wide spot to let them go by. One of the men stopped to admire Syringa. He saw her freeze brand on her neck so we talked about that, then he asked if he could say hello to her. She sniffed him like a dog then began licking his hands

. She is a somewhat friendly and licky girl.
We talked some more, then they continued on and we did too. I thought we seemed to be doing more talking than riding at this point.

Real soon we came up to the gravel road that runs through a section of the park. We were crossing it and going to head down a trail into a little valley I like. There was an older lady right there at the road/trail intersection on a big Paso Fino so we said hi. I complimented her horse and she started telling me his history. Then her history. Then her training history and credentials. Then some of her students and their horses. Then some training issues that people in general have and I was wondering how to extricate myself gracefully. In the meantime my little mare, after being a bit antsy at first, stood quietly, hip shot and waited for me to give her the signal to go.
I figured at least this was good training for her, to learn to stand patiently while I was mounted. Then after probably 20 minutes I looked at some dark clouds moving in and said maybe we better beat the rain. Whew, she continued on the road and we went into the valley.

I decided we should make some time so we swung along at a canter, then turned and went up a pretty big hill, still loping. At the crest here comes another gal on a pretty paint that I've seen around riding trails. We slow to a walk to pass and say hi. She remarked at the busy trails that day and I agreed, then laughed about my last encounter. She exclaimed at that and laughed and apologized that I had run into _______.

She apparently knows her.
Poor ______. I think she's probably lonely, and I'm not ridiculing her, but not everyone has that kind of time for long conversations to a casual stranger while riding.

We made it back to the trailer without further meetings. That was a day like I have never experienced while riding, haha.

@farmerjan , I wanted to let you know that I jerry rigged a sidepull out of my nice headstall. I scavenged rings from an old surcingle, a throatlatch for a noseband off one of Lukes old bridles and the reins and chinstrap from the original sidepull. It worked ok, and now I know what I need to do to make it really work. The cheekpieces want to slide down under her jaw, so it will need a noseband that is Chicago screwed into position. Other than that it was fine. She worked real soft and responsive in it, in spite of it being kind of slipshod, so that's a gold star for her. Thanks for the encouragement to make it work!
F