I wanted to relay an experience that some friends of ours had at the rally in D.C. last week. We saw them and spoke with them this evening.
I don't regularly partake in current political discussion on the forums I visit, but since this is my journal spot I will take a minute to make an observation. If you don't agree with or like what I say feel free to go to a different thread. I don't mean that rudely, but there are plenty of other places on BYH and related forums where these things get hashed out repeatedly.
Our friends J and K own a business across the border in Washington state. Their business has been severely impacted by all of the closures, extended closures, and extensions on the extended closures.
When they were told they would have to remain closed an additional period of time they made a quick decision to to attend the rally. They have always wanted to visit the Capitol anyway and tour the historical sites.

Their experience at the actual rally was nothing like what was portrayed on mainstream media. Since I don't watch mainstream media I am relying on what I have heard about what was shown to the American public by people who have watched it.

This is what they actually encountered there. Families. Families with their kids, elderly people in wheelchairs, and walking with canes. Regular working people. Calm pleasant people, most of whom that they had conversations with described themselves as non political, but were there because they were concerned about what they saw happening to our country.
They met a young woman with a 4 month old baby in a front pack, walking with her other young children. Her husband is in the military and deployed. As the crowd walked and stood in the long line to get to the Ellipse they talked to each other. People were calm and orderly.
I'd like to emphasize that.
In order to enter the area where the speeches were taking place they had to go through security and no one was allowed to enter with a backpack. K said there was a mountain of backpacks at the entrance. She thought it was significant that when they came back out they found their backpack in the pile, nobody had been stealing or destroying them.
That's a testament to the type of people in attendance.

They weren't near the front of the pack when the capitol building was entered, but they did hear the flashbangs going off. They had much to say about the general atmosphere, and said that they personally did not see people walking around in helmets, tactical gear, or weird outfits.

Overall they related that there was a definite subdued spirit replacing the one of cautious hope they had witnessed earlier.
The mayor issued an alert that the city was shutting down at 6, so they decided to turn back and go back to their hotel in Alexandria, so they wouldn't get caught without a way to return.
On the Metro ride back they said evrything was calm. They walked the mile back to their hotel on nearly deserted streets because the mayor of Alexandria had issued a curfew because of all the "rioting". There was no rioting going on.
They said most businesses were permanently closed and out of business, but they did find a restaurant that was open. The chairs were all up on the tables and there was no eating in. When J asked the cashier why he said "Because of all the demonstrations". J told him there were no demonstrations, everything was quiet and the cashier said, "order of the mayor!"
Back at their hotel they ate their bagged dinner and tried to warm up. K said there was such an air of oppression in the area that it was palpable.
Our friends are solid people. Not dramatic, just honest folks.

The reason I'm relating this, and I know this is a very long post, is just to get a different perspective of what happened in D.C. last week.
We are lied to constantly, and the ones who have the greatest control of information dissemination are twisting and spinning truth. Truth has taken a beating lately and I don't think any network news can be trusted any longer.

I don't think this is a great job of relating what personal friends of mine told us tonight, but I think it's very important to be suspicious of what the news reports. And why.

I think it's an excellent job and concurs with other people's accounts...people who were actually there. Yes, we are being lied to constantly about everything, from politics to health issues. Those who want to believe the lies try desperately to suppress those telling the truth, so it compounds the lies.

But...this is not something new. It's been going on for a very long time and growing more evident each year. Those who pointed it out down through the years were called "conspiracy theorists" and mocked about wearing tinfoil hats. Mocking has become the most prevalent ~and unimaginative, I might add~ way of trying to make people shut up about the truth they see with their own eyes. That alone could tell you what age we are living in... "Knowing this first, that there shall come in the last days scoffers..."

I'm willing to bet your friends will go home and try to tell people what they saw and will be called liars, will be scoffed at and many will try to suppress what they have to say. It's a spiritual battle, my friend...you can see and feel it, it's of such a great magnitude. It's like trying to fight a great fog that has taken over the minds and hearts of so many.

Thank you for telling the truth.

@thistlebloom this is encouraging and what I have heard from first hand accounts.

I strongly that both of you have hit on what appears to be going on. A couple of years ago I started browsing the news medias web sites and it was pretty obvious they were all using the same play book so I quit watching. I literally don't believe anything I read on the net unless I can get a reliable confirmation but even then I'm skeptical so I guess that also makes me one of the "conspiracy" folks.

Thank you. We need to hear the truth.

Thank you all for the replies.
We had a windstorm last night and today and haven't had power since 3 or 4 a.m.
They say it may be off a few days. I'm using my phone to post this but can't type well on it. I should save my dwindling battery. I'll get on when possible.

Yesterday was a pretty wild day. Power outages for miles around. Happily we have the woodstove so no worries about heat, and the stove is gas so cooking works fine. Can't bake though because the oven igniter is some kind of electric glow type thing.
Bucket baths and kerosene lamps last night, then for entertainment I read aloud to us by flashlight. The power company predicted it could be out for two days, but happily it came on at 3, while I was lying there awake wondering how long the frozen meat would last in the chest freezer.

Unfortunately the wind toppled a tree over the corner of the dog run, smooshing it. The dogs were not in it at the time, and I had just pushed a wheelbarrow full of firewood past where it landed a few seconds before.
Makes us give some thought to possibly removing the fir tree at the south east corner of the house. It's a lovely tree and I have a nice shade garden under it. It cools the house on a hot summer day, but I'd rather have a hot house than a smashed roof.

You can see there's not a lot of root mass on these pines. With the copious rains and above average temperatures that thawed the ground it's no surprise we lost some trees to wind. 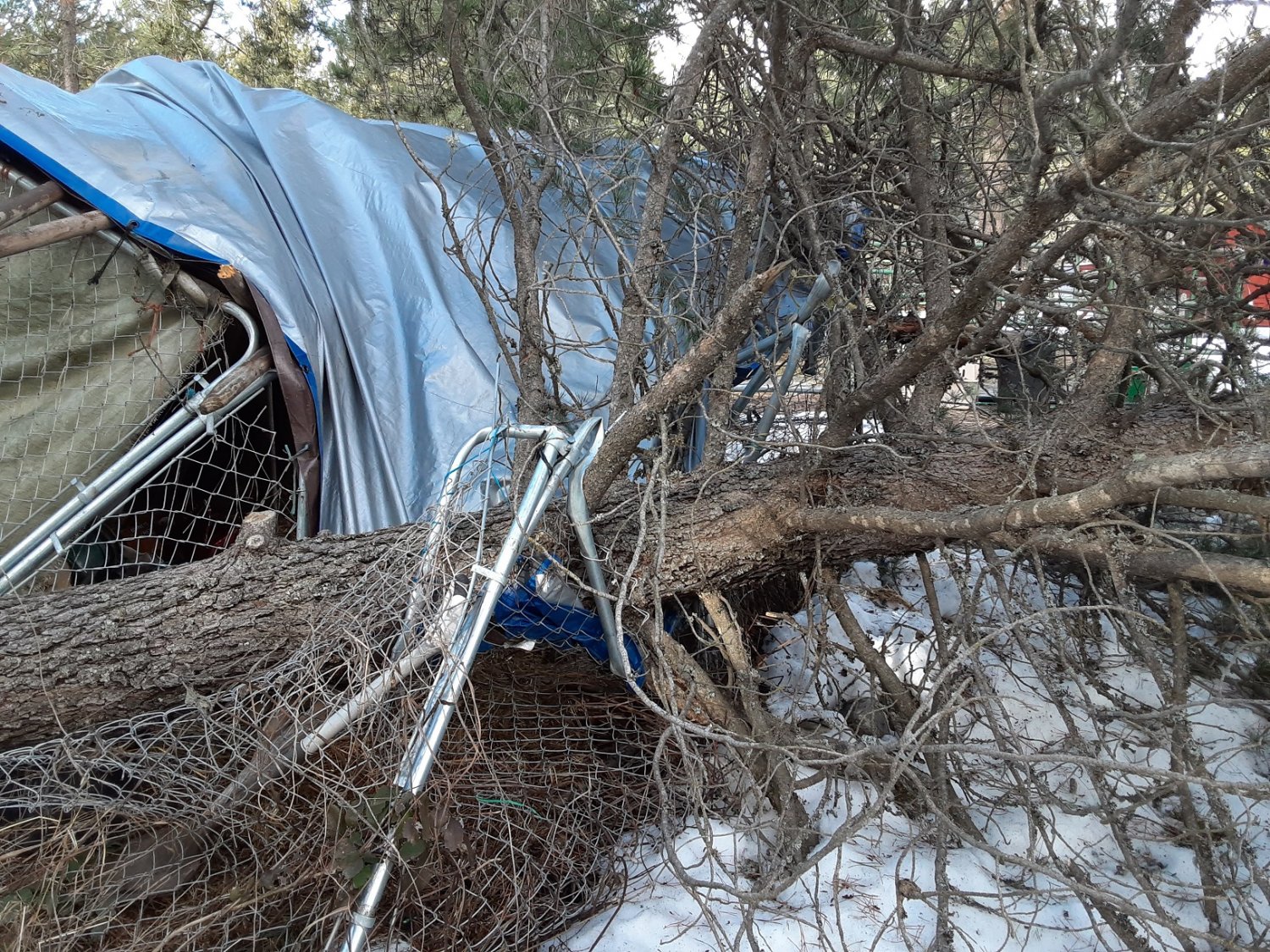 Maybe this should be posted in "you might be a redneck if..."
your dog run is roofed with tarps over tree stakes and a ridge pole of sapling.

We have intended making a proper metal roof over it, in fact that was the loose plan for last summer, but I'm very glad now that we ran out of summer before we got to it.

Good thing it was the dog kennel (with the dogs not in it) and not your house! So I guess it is chainsaw party time?

Baymule said:
Good thing it was the dog kennel (with the dogs not in it) and not your house! So I guess it is chainsaw party time?
Click to expand...

That's exactly what I said, even though it's not really an either or thing.Very very thankful it wasn't both!
I was in the drive through teller at the bank today and the fellow in the truck next to me was telling the teller that he had a tree go right through his roof yesterday. He and his wife have their 5 grandchildren living with him. I felt terrible for him.

Having had the experience of a hurricane dropping a massive oak tree on our old house, I feel terrible for him too. I hope he has good insurance.
You must log in or register to reply here.
Share:
Reddit Pinterest Tumblr WhatsApp Email Share Link