I see what you mean about being tempted to keep that tri color just for its color pattern! Lucky it's a ram instead of a ewe.

Ewenique had twin boys today. 1 is solid black with a tiny white tip on his tail the other is solid white with a silver dollar sized brown spot on his left shoulder. I can't post their picture, my phone is updating!

Bobcat alert! Neighbor Ron just called, he was on the property between us, after a bobcat. one got on their front porch a few nights ago and ate their 7 baby chicks. He just shot at one right at our fence, but missed. Neighbor Ron said there is two of them.

They have been going bat-sh!t crazy lately, both at night and during the day. Trip puts his nose in the air and trots to the side fence, he knows the bobcats are there. We haven't known what the dogs were alerting at, but now we do.

My guess is that we have a female, either with kittens or will be having them soon. It seems when the ewes are lambing, it draws bobcats like magnets. Hmmmm.......... my laying hens are in a coop in the garden, not a very secure coop at that. I need to move them to the coop in the front pasture so Sheba can protect them.

Here they are! Ewenique always has twins. She has been demanding attention lately, wanting belly rubs, back scratching and pulling the dead wool off her back. If I stop, she lifts up a dainty hoof and paws me. 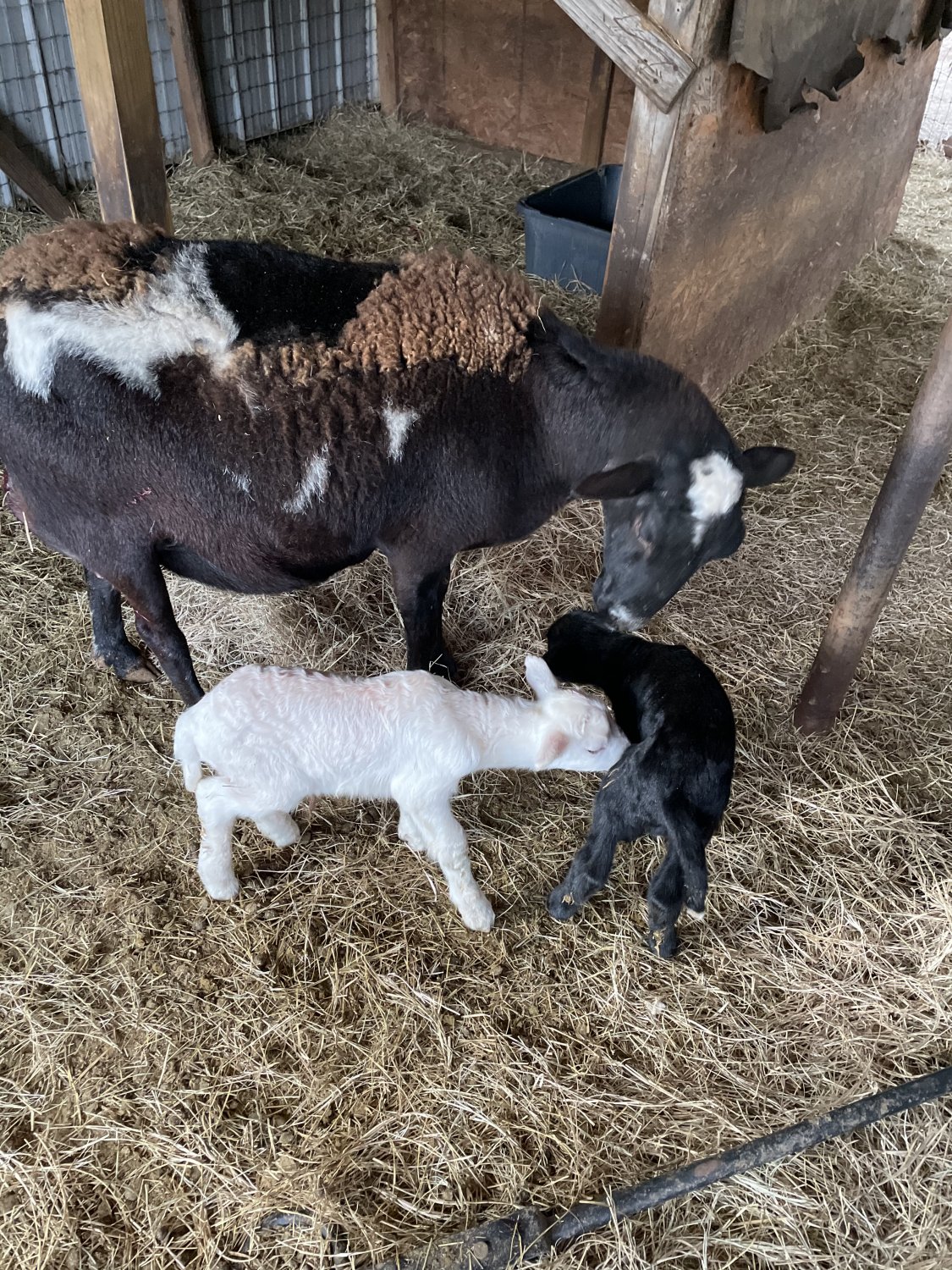 Two set of triplets this morning! All mixed up, I let the sheep out in the yard so I could sort them out. All boys, 1 in each litter very tiny and weak. 1 utterly rejected by mom. They were cold. I sent BJ to town for whole milk, cultured buttermilk and evaporated milk. I’ve haltered and tied both ewes, Miranda and her daughter Eve. Eve’s rejected lamb went first. I tucked him in my jacket, went to the house for towels, heating pad and hair dryer. I put a bottom of a dog house in Eves pen, put the cold lambs in on top of the heating pad, laid the hair dryer close, pointed at them and covered them with a towel, heads out so their little lungs don’t cook.

Eve’s lamb warmed up first, he was sucking fingers and my chin, HUNGRY! I tied her and held him to the teat until he got the hang of it. Hopefully she will claim him. Little stinker is STILL sucking! Her other two lambs had warm mouths and have got up and nursed. Reject is making up for lost time!

Miranda is always a good momma, her tiny one was just cold and weak. I warmed him up while Reject was sucking. Then I haltered Miranda and tied her. She fought, but I got the little guy up to her teat and got him to suck. Her teats are big, he is tiny and he had a hard time.

Finally it looks like all are full and laying down. I’ll supplement with a bottle. Hope Eve accepts Reject, he finally got full and laid down. I untied Miranda, she’s a good mom, I just got to watch the little guy. I’m gonna loosen up Eve, but leave her tied. 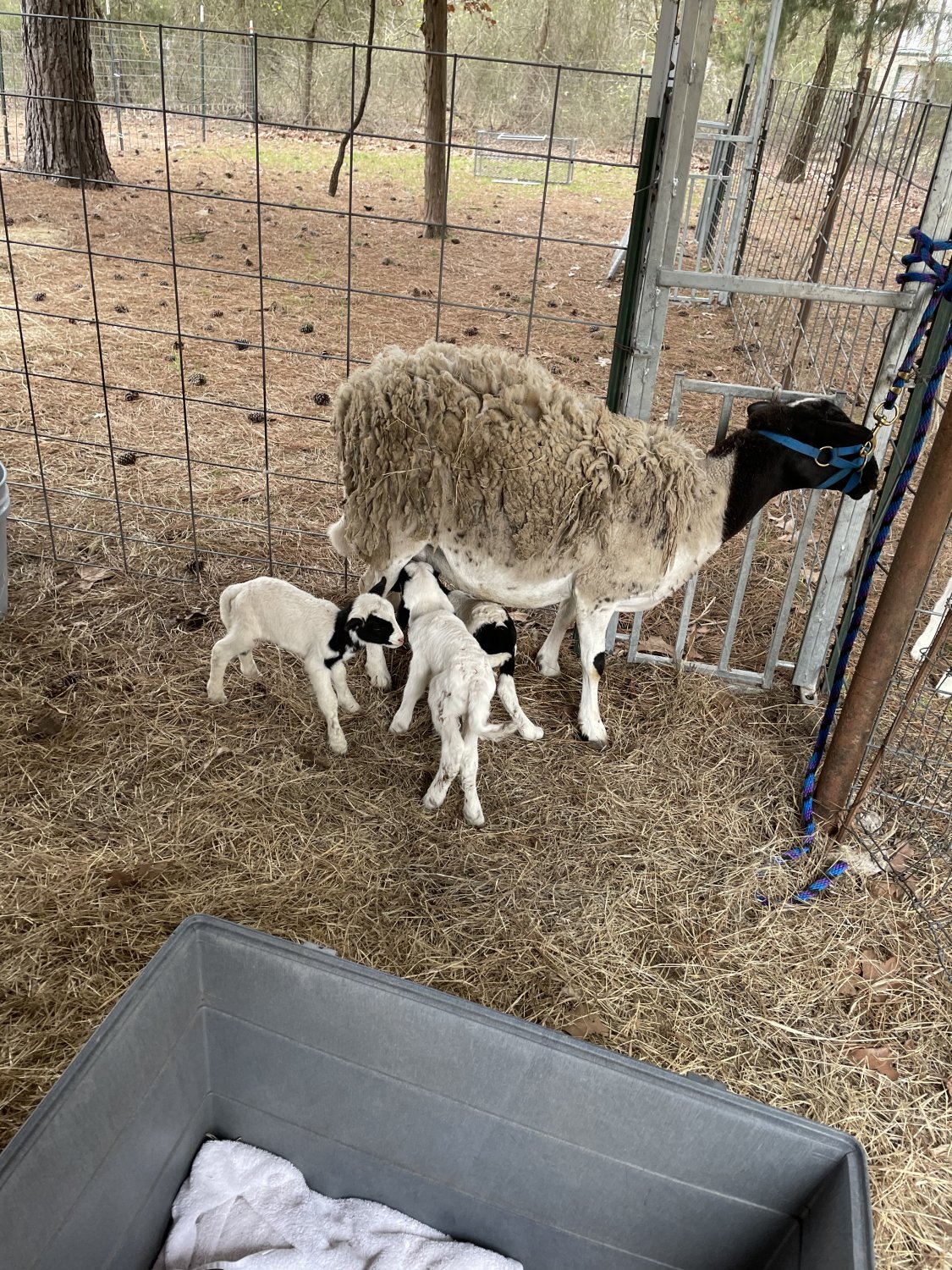 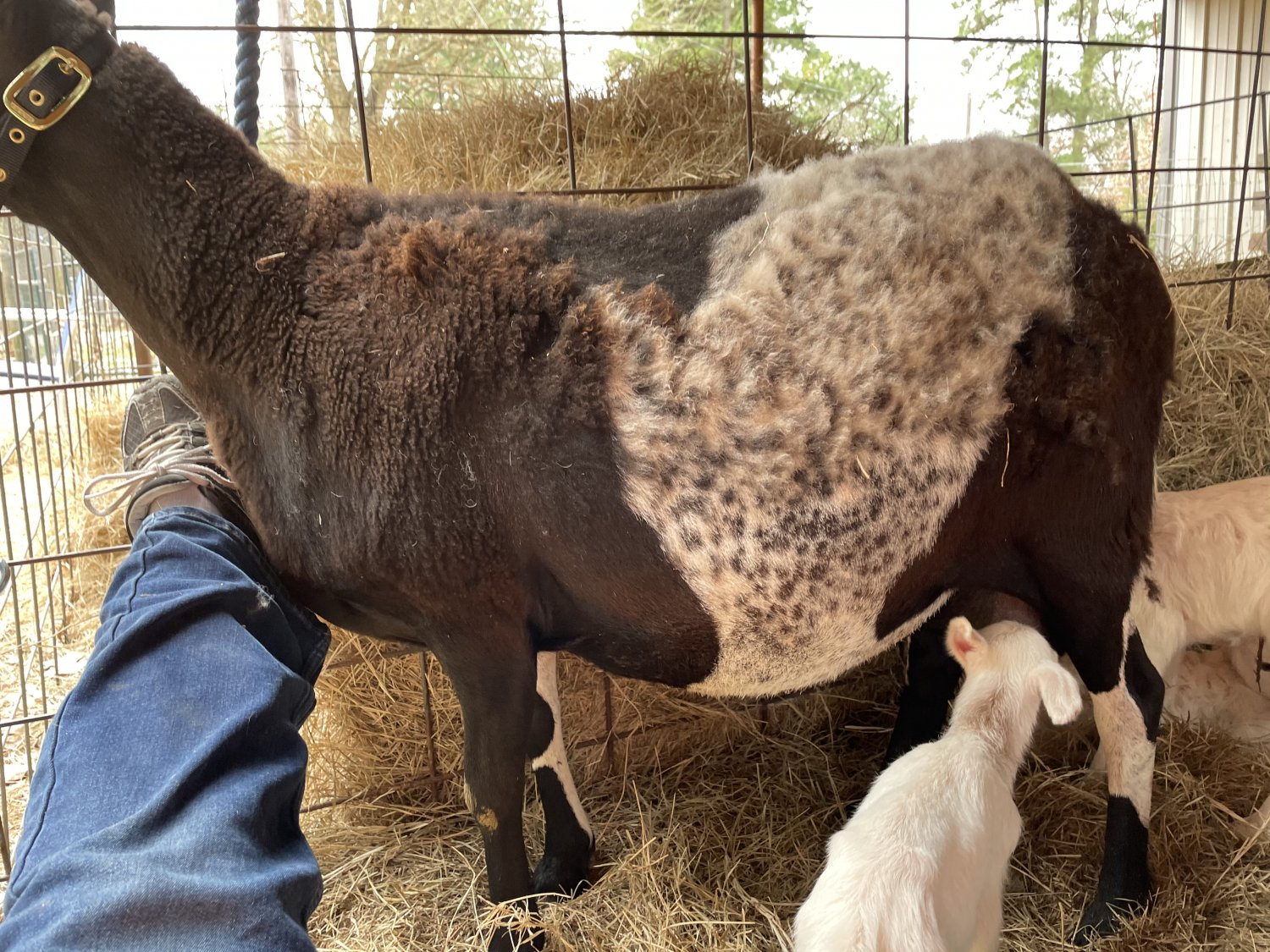 I pray I can get them all to survive.
Eve, I loosened the rope so she can nuzzle her babies. 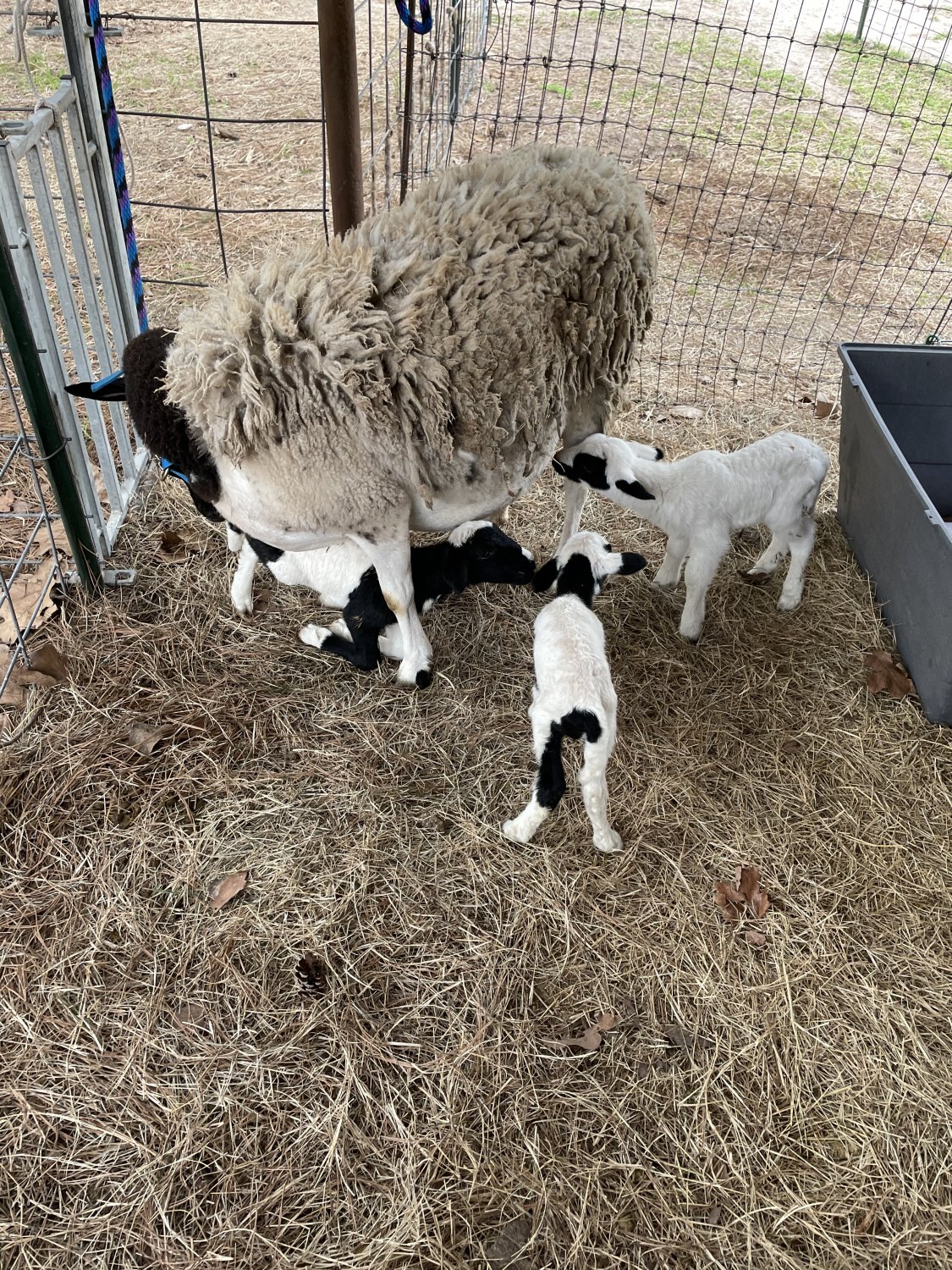 Baymule said:
I pray I can get them all to survive.
Eve, I loosened the rope so she can nuzzle her babies.
View attachment 81231

Adorable! Did they both lamb without issues other than the third lambs getting cold/weak? I love the coloring on Miranda.
F

1:00!!! BJ just got back from Town, brought me chicken. No wonder I’m hungry and thirsty!

Eve slipped her halter and went to beating up on Reject again. So I put it back on her, last notch and loosely tied her again. Reject and the tiny weak one went to banging on her udder.

I’ve never tried it, but I’ve heard that a little smear of Vicks on her nose makes them all smell the same. A little dab on their tail ends helps too. It’s worth a try. Got nothing to lose.

I have to brag on Sentry. I put him in the barn last night because of bobcat threat. He is a fantastic dog fo lambing. What a good boy! He was meant to be our dog!

Eating now, can’t wait to get back to my triplets!

Larsen Poultry Ranch said:
Adorable! Did they both lamb without issues other than the third lambs getting cold/weak? I love the coloring on Miranda.
Click to expand...