Vicks or even a cheap perfume.... we used to use the cheapest perfume from a closeout shelf.... on the nose of the female (cow or ewe) and then on the baby.... butt, neck, anywhere they are nosing the baby. Put it on all 3 so she doesn't identify one differently.

farmerjan said:
Vicks or even a cheap perfume.... we used to use the cheapest perfume from a closeout shelf.... on the nose of the female (cow or ewe) and then on the baby.... butt, neck, anywhere they are nosing the baby. Put it on all 3 so she doesn't identify one differently.
Click to expand...

I’ll do it! Thanks! It’s good to know that it worked for you!

The vicks didn’t work. I swear that ewe can count. She ain’t having him, no way, no how. I’ve spent all day making sure all the lambs got colostrum. I brought Reject in the house and Miranda’s tiny wee one. She is being a good momma, but Tiny is small and weak. I gave them both a bottle.

@Mike CHS A please ask Teresa how many ounces and how often. Thanks! 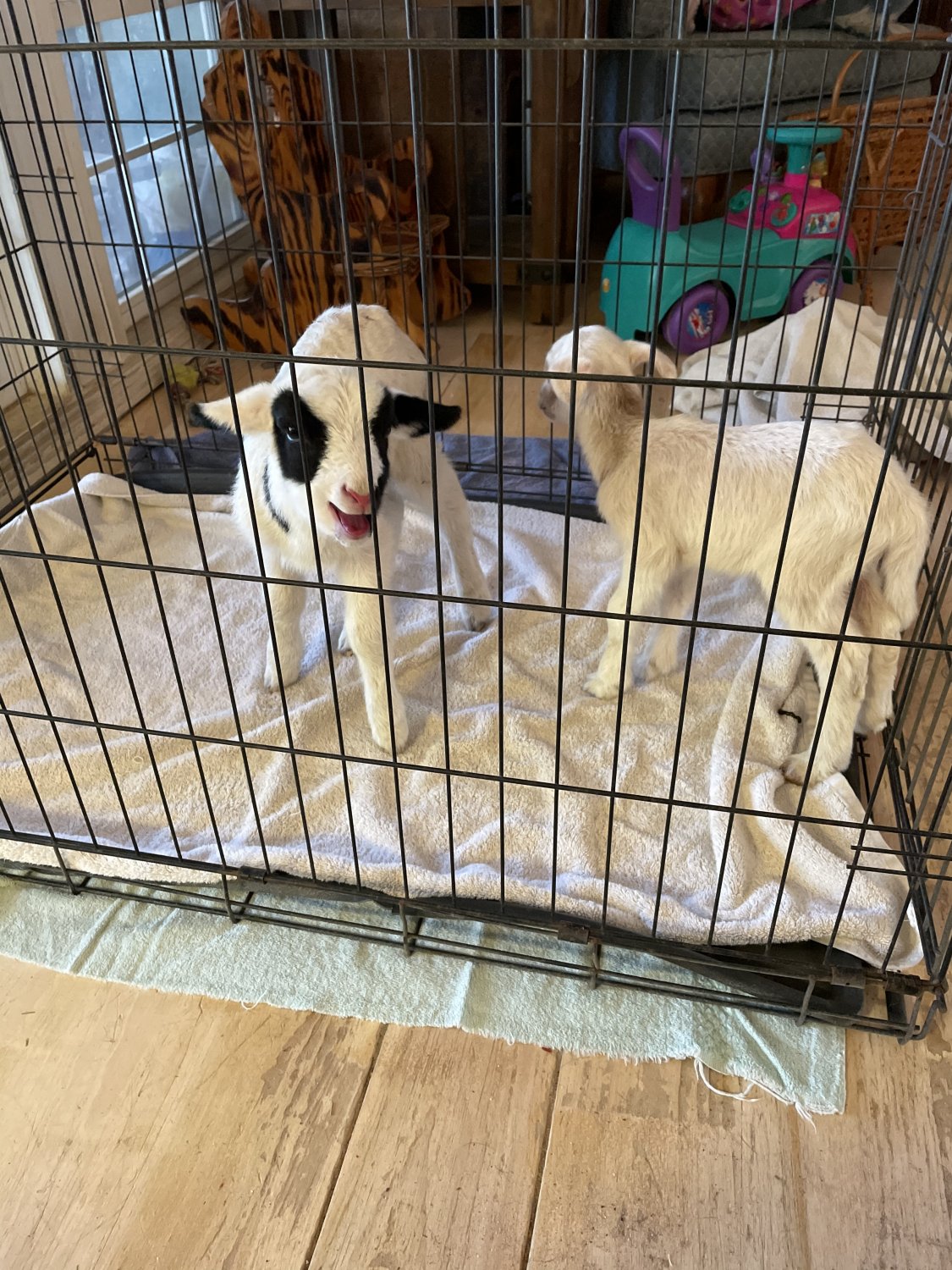 We gave ours 4-6 ounces four times a day. We did not feed them during night but we made sure they got a last feeding about the time the sheep bedded down. At 3-7 days old, 8-10 ounces 3 times a day.

We started doing a bucket with nipples 12-14 ounces three times a day.

Thanks! I gave them each 2 1/2 ounces twice now, that are so small I didn’t want to over feed them. I just fed them, I’ll feed them again before we go to bed and tomorrow I’ll get on that schedule. Thanks @Mike CHS snd Teresa! I’m using the formula of a gallon of whole milk, poured out 2 cups, added 1 cup cultured buttermilk and 1 can evaporated milk.
F

The way we have done it is to take them away from the momma.... then put the smaller, weaker ones in with her first, let her smell and all, let them get a good nursing in, then let the bigger one in after. This way the weaker ones get a full belly and they get more energy. Did it 2-3 days to get them all accepted. But there are some that won't take more than 2..... and yes, some can count.....

Nothing I did could convince Eve to take Reject. She absolutely did not want him. She got to butting him so hard that I was afraid she would hurt him. She wouldn't let down milk unless I put another lamb on the other side. Reject at least got colostrum, he sure has an appetite! I just fed them again, Reject downed 5 ounces, Tiny downed 4 ounces, then Reject got the other ounce. They are both settled down and asleep now. I'll put Tiny back with Miranda tomorrow after a bottle. I may have to bring Tiny in at night for awhile, we'll see.

We are going to Odessa next weekend. It's the middle granddaughter's birthday, our 25th anniversary, BJ's birthday later in the month, so we'll just have a party. We'll take Reject with us and the girls can bottle feed him. They ought to get a kick out of that.

Lily just had twins, sex unknown. They are marked brown, black and white. 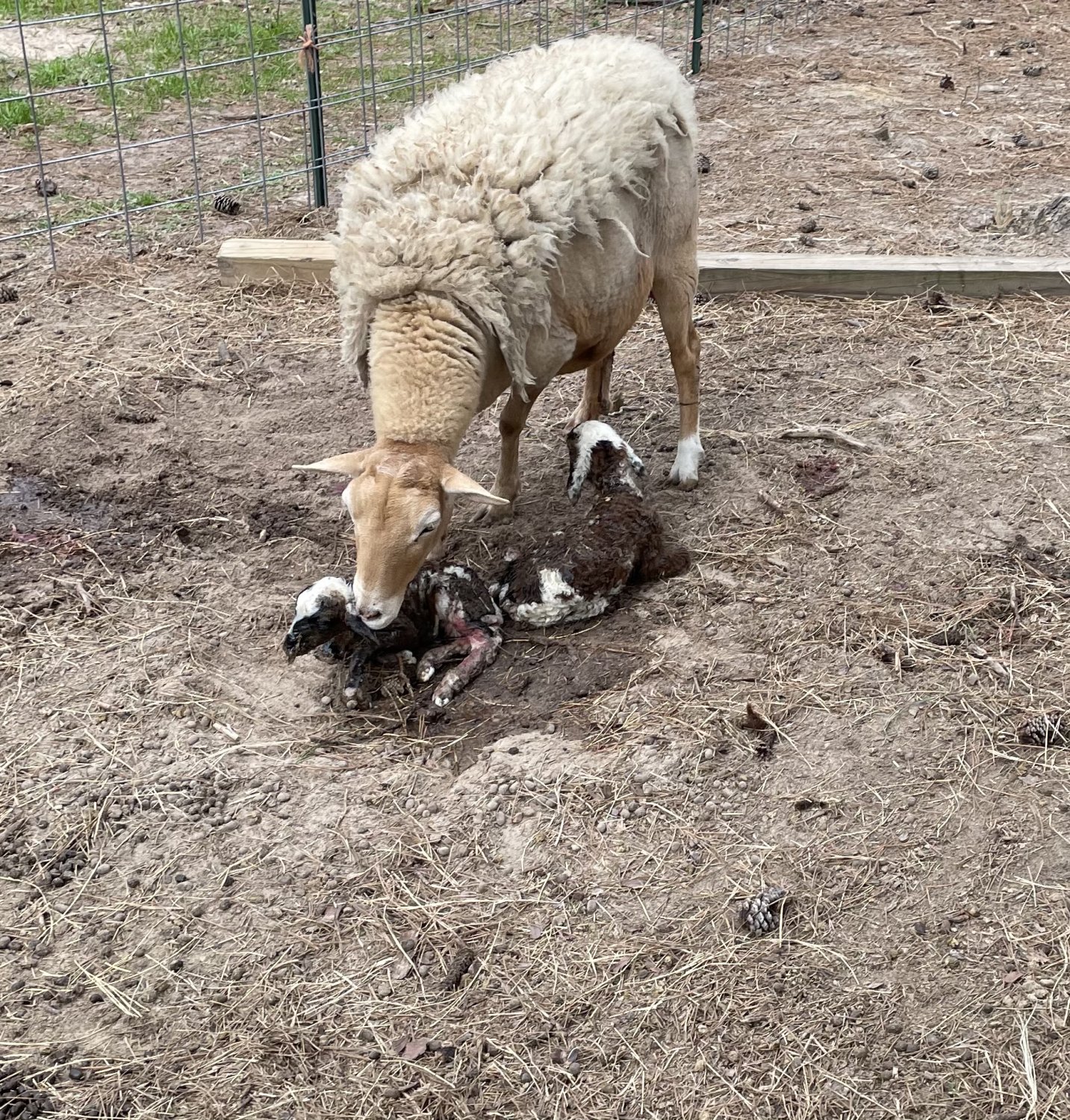 Can you use the afterbirth to graft Reject on to Lily?

Are the 2 ewes that had the triplets keeper ewes in your flock? Are Reject and Tiny ewelings? If you pan to keep them, maybe you should just bottle feed them both together. Raising them together will help them eat better, and they will play together and keep each other warm. Feeding 2 won't be much harder than feeding one.