I have the following 3-pt attachments: shredder/rotary mower (the one most difficult to connect and disconnect), wood chipper, box blade, and wagon (goose neck) hitch. What makes the shredder the most difficult is connecting/disconnecting the PTO shaft. But still, making the 3 attachment points easy to connect can't hurt. I will look into those.

Pat's is just the lower links though typically those are the hard ones to get lined up. And there is a spreader bar (optional I think) to set the arms at the right distance for a given implement. The spreader is taken off before you start working.

I went with the Harbor Freight $100 model, but then had to go on Amazon for another $45 and buy one that put the hook a BIT farther back of the frame.
https://www.amazon.com/gp/product/B00OKWIIOY/ref=ppx_yo_dt_b_asin_title_o02_s00?ie=UTF8&psc=1
Seems to be something done by a lot of people on Tractorbynet. Seems ridiculous they don't have that sort of hook on it already. This was just to get it far enough back that the landscape rake could connect. I originally started looking for a QH at the Kubota dealer since they are close and that is where I got my Stihl chainsaw and string trimmer. They wanted something like $450 for theirs and I don't see a lot of difference, especially for something I'll use a few times a year.

Somewhere @Senile_Texas_Aggie asked for pictures of the mod I did on my flail mower. Don't remember where so I'll just put them here. TSC didn't have a variety of clevis pins so I had to go with the much too long "universal" pin with a bunch of holes

replacement on the lower door connection. 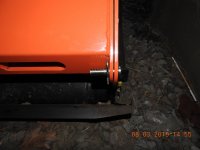 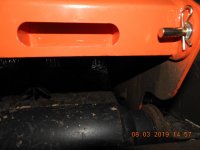 Originally it had the same bolt and nut as the upper connection. 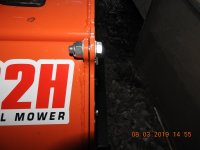 This is what it looks like with the door closed 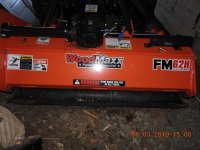 And this is with the door open for maintenance

I heard the calls to FREE THE FISH!
Today was the day.
Here they are posing for their last "in the house" picture 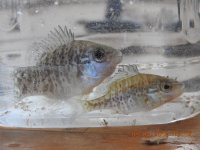 And the first for comparison, when they had been in the bucket a couple of months. 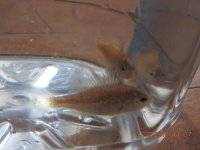 Here they are with a male fathead minnow protecting its territory, it is the one with the white markings on its fins 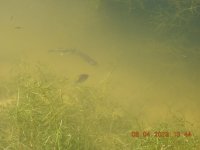 And some of the VERY MANY small fish in the pond, those that I put in from the bait store have been busy.

Bruce said:
Somewhere @Senile_Texas_Aggie asked for pictures of the mod I did on my flail mower.
Click to expand...

Thank you, Mr. @Bruce! That is a lot clearer now. And I can understand why you got a flail mower for the space savings!

Thank you for posting the video of freeing the fish! I hope they can make it through the winter OK.

I have been wondering how your pond shaped up. You were hoping for Winter snow and Spring melt to fill it since working so hard on it last Fall. Sorry for such an abrupt question requiring a possibly long answer. You can make it as brief as you want.

Pond was full in fall.
Is that brief enough?

We started to get rain not long after I finished digging it and it filled through the fall. I didn't put the fish back in because I had no idea if there would be anything for them to eat.

It was full most of the spring because we got a lot of rain. So much it delayed planting the garden, didn't even get in spring peas this year. But then, like last year, the rain became scarce and the pond has been going down. But so far, there is still plenty of water in it, far more than was there in July/August last year. The ASSUMPTION is that with a greater volume of water, it can evaporate at the same rate and still have enough to support life until the rains come again.

I should take a picture so y'all (for the southern people) can see what it looks like. At this point I'm not concerned. But then we bought the place in Nov '11 and prior to last year the only year it got dangerously low was 2012 but August rains brought it back up. August last year was pretty dry, much more so than "normal" and it continued to dry as I dug.
You must log in or register to reply here.
Share:
Reddit Pinterest Tumblr WhatsApp Email Link