A thought just went through my head (and not so many do these days). Over here bracken can be something of an invasive pest. Large parts of the local moorland were cut and baled a few summers ago and the bales were apparently used for animal bedding. Seems it was much used before straw became the norm.
The areas which had been cut have far less bracken now, too. Seems to me a 'return to the Old Ways' would be very beneficial.
Last edited: Jan 7, 2020

wow! looks great Bay!
I never thought about deep bedding sheep, It gets so wet here, especially in the spring their stalls are a disaster even over night. We have ours on rubber stalls mats then bedded with shavings that I pick out everyday. This is a really cool idea, I have done this with the chicken coop though! 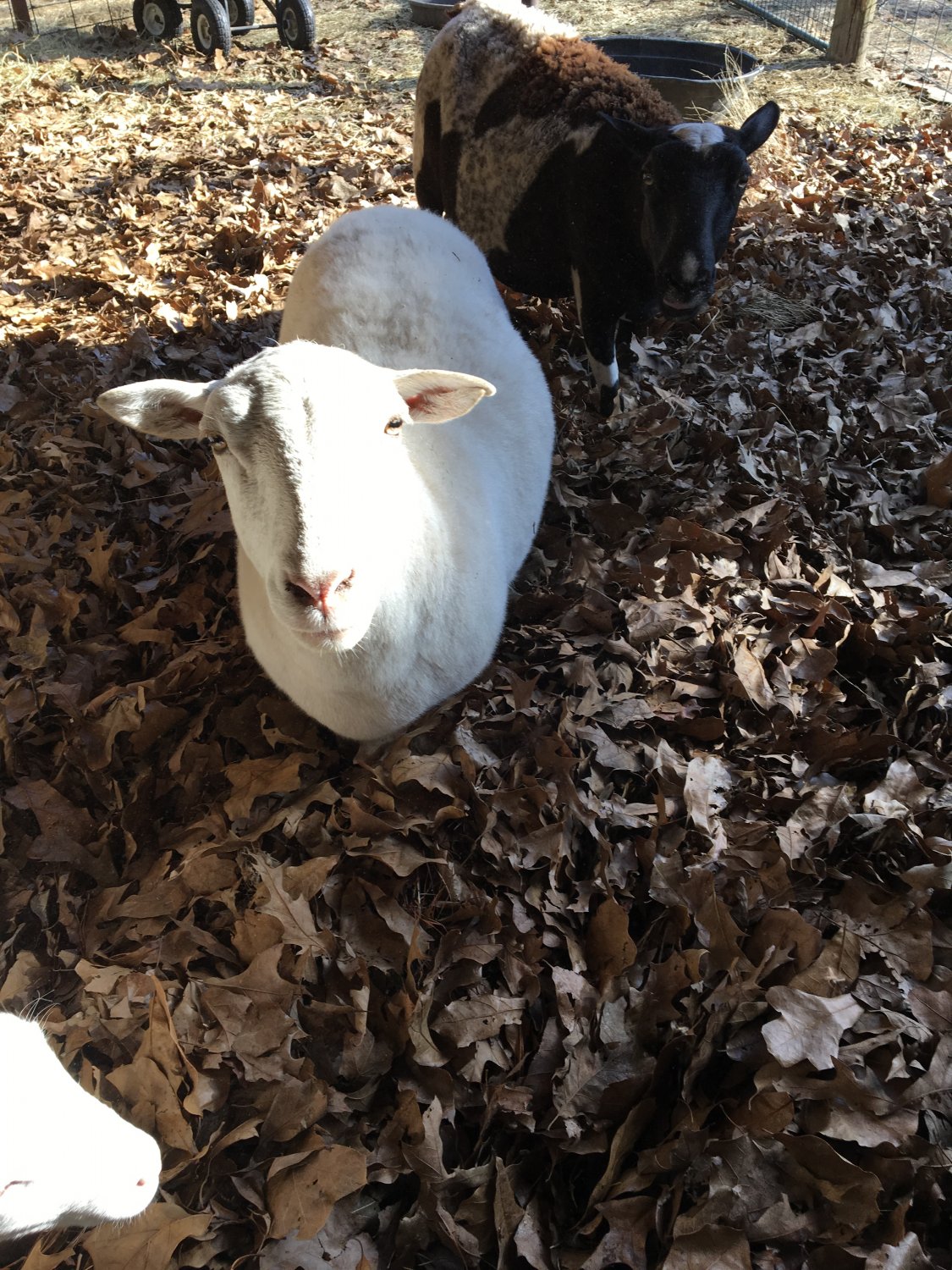 DL is perfect for wet conditions and is one reason I chose to use it, as most of my sheep pen has no shelter. AND the rain runs right down into that area, as it's at the bottom of a slope with a nice little funneling gully to aid with the runoff....right into the pens.

I put directional diversion for the bulk of the runoff but mostly that area generally stays pretty wet all winter long, even when sheep are not there.

Now, even though the bedding stays wet beneath, on dry days the top dries out pretty quickly as the moisture is wicked towards the bottom. This area also drains better now because worms are coming up from below to feed on the manure and litter material and those tunnels helps the ground absorb the rain.

Even on wet days, the DL is spongy and springy to walk on, so the hooves are not immersed in wet mud all the time but are bouncing along on the top of the mass. A few minutes of fork work now and again redistributes dry matter from under the shelters to wetter, more high traffic areas out in the open. I'm finding my sheep are not lounging in the dry hay under the shelters where you would expect to find them on a cushy bed of hay....instead they are lounging outside on the leaves in the pen unless it's pouring down the rain.

I credit the groundwork of sticks, stalks, vines, etc. for keeping air spaces under the DL and then the addition of leaves for creating even more air spaces in the mass, along with the hay fibers. Without one or the other in place, neither one seems to work well on its own. Without those air spaces it all would turn into an anaerobic mat and not compost at all but just sit and be slimy or cake into bricks.

When I get it thick enough, I'm going to measure internal temps on the DL to see if the composting is generating any level of heat. I know the chicken coop is, as per usual, but it's a more enclosed space.

Coolbreeze89 said:
THANK YOU for the DL info. All my oaks finally shed their leaves, and the wind blew piles up against my fencing. I’ve been wheelbarrowing them into my goat “barn”, and I’ve had zero smell issues ever since!! I mix in the dropped hay as well as some sticks, etc to keep the texture varied as you suggested. I’m so pleased. Thanks for this fabulous thread!
Click to expand...

How is your deep litter progressing?

Baymule said:
How is your deep litter progressing?
Click to expand...

It’s still going well, thanks. I’m wishing I would have put even more leaves, as they’ve already trampled the 18”or so down. The pigs/chickens go in periodically to clean up wasted hay/feed and they aerate a bit. I’ll probably add some pine shavings if/when a smell starts to creep back in. It’s been so wet lately that it’s hard to get a sense of how soon it will need it. I’ve temporarily got my girls spending the night in a shelter closer to my house: it has power to run my “baby monitors” as I await kidding (and heat capability for the babies, if needed). They’ll all go back to their usual shelter with the DL once everyone has safely kidded. I’m already seeing the difference: the temp shelter has hay down for bedding. Even with me spot-picking poop, it’s already got more of a smell than their DL did after a month.

Took advantage of a pretty day to move some DL around to even out the moisture, cap off any places that were too moist and move moist bedding to dry areas.

Mom added some sticks picked up out of the yard, which will be trampled into the DL and layers of material added on top of them, to create good air spaces in there.

The ducks helped sort out the wet material for me....not sure what they were eating in there but it seemed pretty tasty, they worked over those areas GOOD. 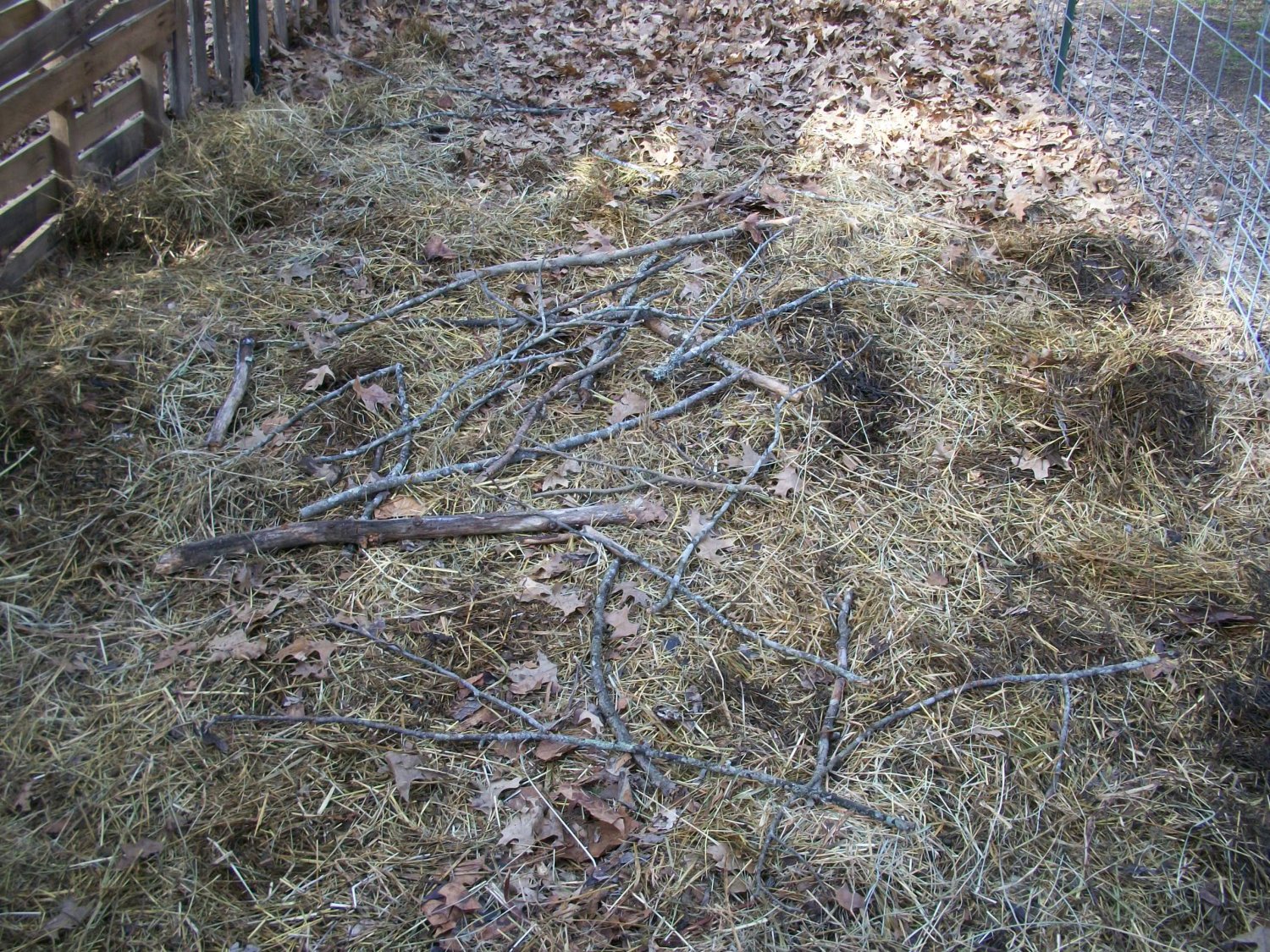 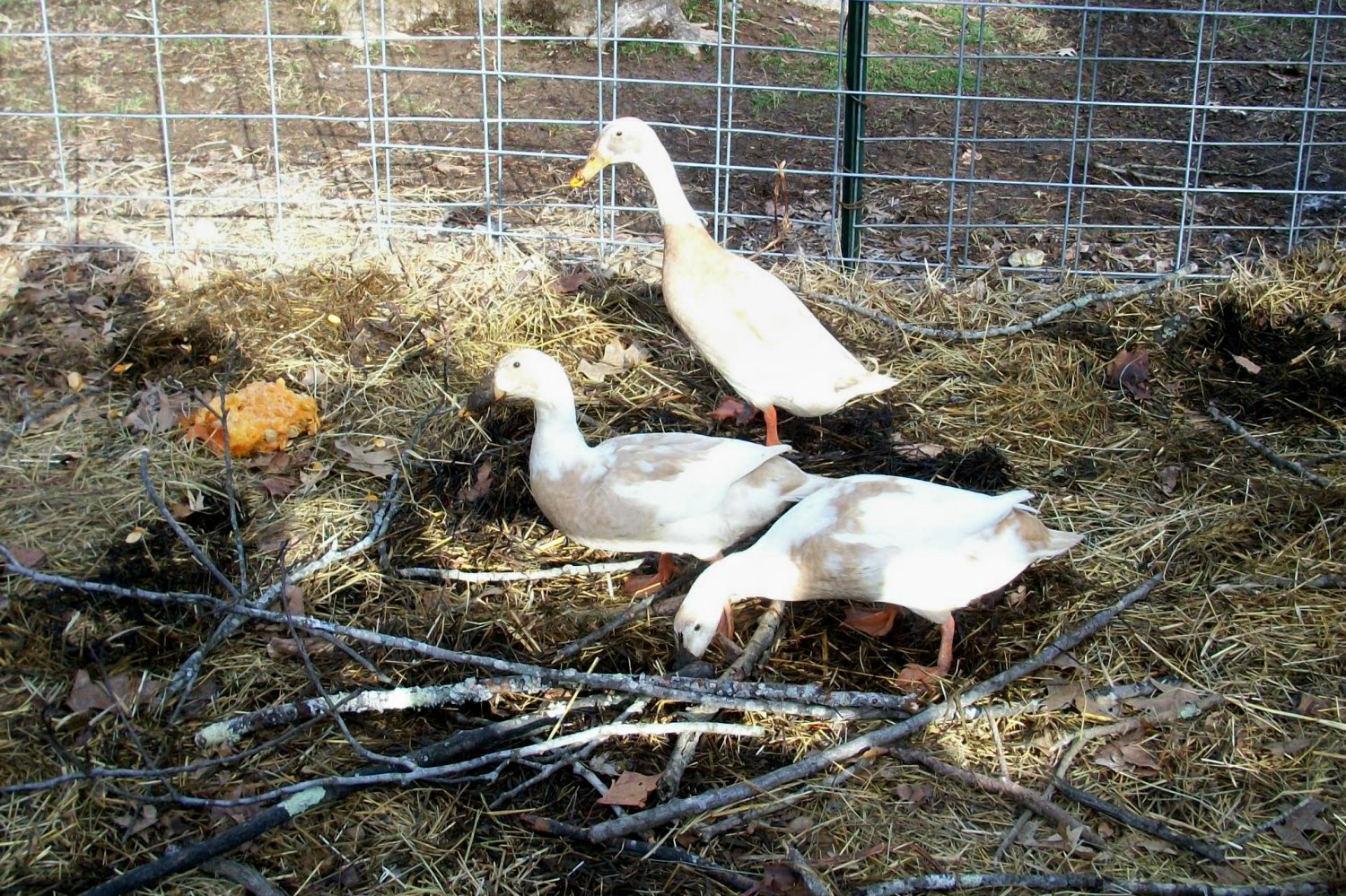 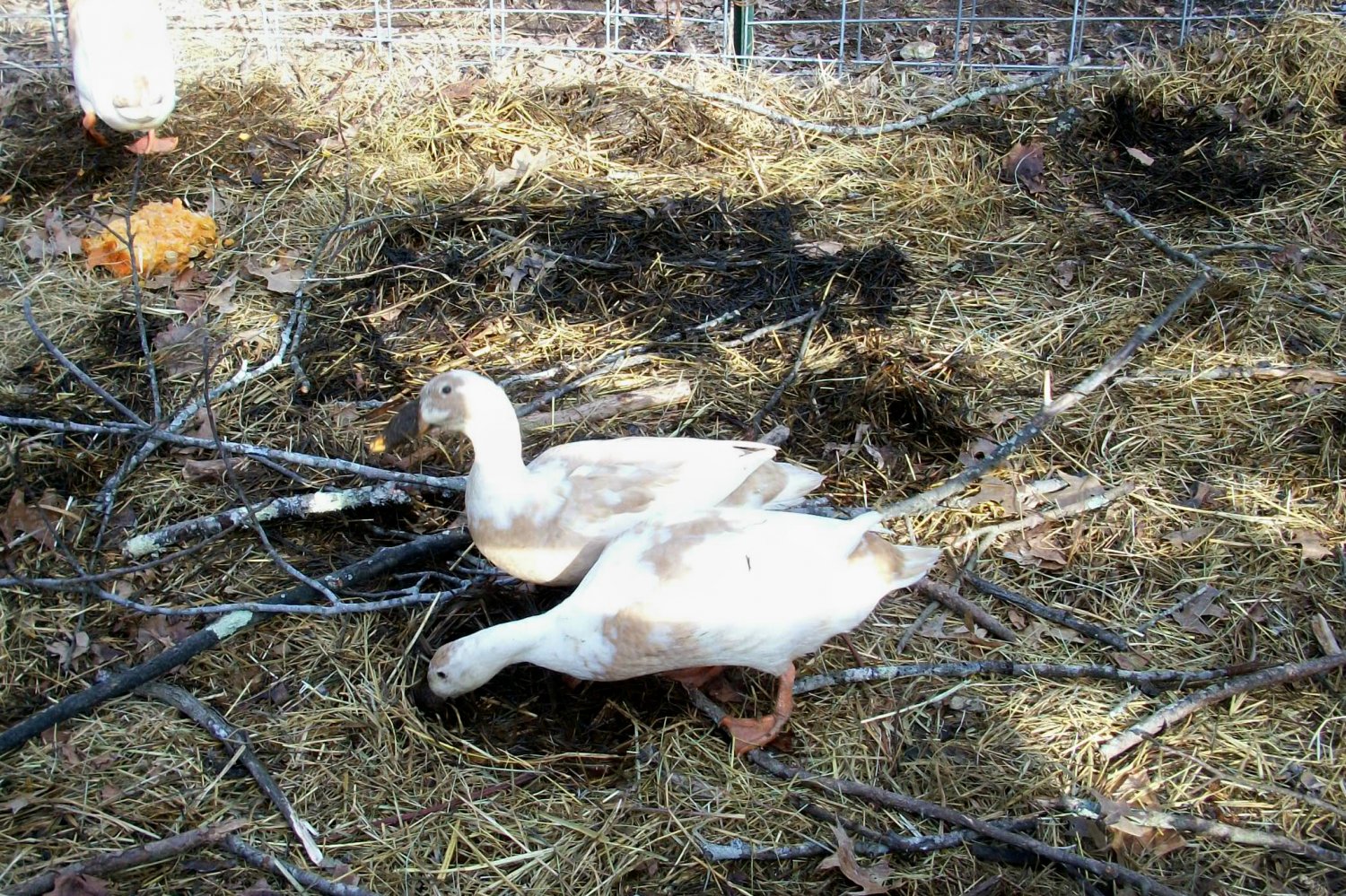 After the next rain I'll put a layer of leaves over this area and so it goes....sticks, leaves, hay, rinse, repeat.

All the black spots are where the ducks are billing through the DL, uncovering tasty things and opening up those areas to the air....all good for the DL. What's amazing is that it barely got into the low 30s today after being 9* through the night, so that DL should have been frozen.... if it weren't creating a warmer layer of composting materials under there. It's most definitely generating some level of heat, even in areas like in the pic, where the DL is only around 6 in. deep.

We got a total of 6 inches of rain over the last week and a half. Today on the news it was announced that we are still in drought mode. We haven't had rain like that since last spring! Part of the sheep lot is not covered by the barn roof and it has got a little sloppy. I just tossed down more waste hay, the sheep will stomp it in and I'll toss in some more leaves. This stuff is gold in the garden and in the pastures where we are trying to get grass started.

Ok, I need insight. 5 of 7 does have kidded, so I have 15 goats living in the area without DL. I’ve been using a layer of compressed pine pellets under pine shavings (no more leaves). The smell of urine is strong after just a week, even with trying to spot-clean. I know they’re pretty condensed, but 8 of the 15 are babies. They have a nice big run, but with a lot of rain recently, they huddle in their 10x20 shelter more than just at night. I’ve tried sweet pdz on the wet spots, but haven’t noted much difference. Once I work through the goat-only food, I’m going to let the goats and 3 lambs intermingle 24/7 and they can have, combined, (2) 10x20 shelters to spread out the stink!

I’ve been cleaning it out every week trying to combat the ammonia smell to avoid lung issues. Just putting clean bedding on top only hid the smell a day or two. What am I missing? This is getting expensive!

Is it well ventilated? I have a 20’x24’ barn. Two sides are wide open. I have 10 ewes and 10 lambs, there is no stink. Their round bale is under the barn too so I have a steady supply of waste hay.
You must log in or register to reply here.
Share:
Reddit Pinterest Tumblr WhatsApp Email Link