Lol it's tiny you say that bee i have stella trained to herd my chicken ducks and geese in. I also have her trainer to grab and hold a bird for me. We used that this evening. One rooster took a liking to my duck hens he now in the grow out pen. She chased him and finally caught him after 10 minutes lol he could fly and escape her. It's getting her also on the right bird but most of the time a quick correction on which bird is all i need. The bird are out with her almost none stop now days along with the goats, pigs and calf. The only ones she likes to eat are my rabbits. But can't blame her to much.

Jesusfreak101 said:
Lol it's tiny you say that bee i have stella trained to herd my chicken ducks and geese in. I also have her trainer to grab and hold a bird for me. We used that this evening. One rooster took a liking to my duck hens he now in the grow out pen. She chased him and finally caught him after 10 minutes lol he could fly and escape her. It's getting her also on the right bird but most of the time a quick correction on which bird is all i need. The bird are out with her almost none stop now days along with the goats, pigs and calf. The only ones she likes to eat are my rabbits. But can't blame her to much.
Click to expand...

How did you accomplish that without letting her go further into harming them? I have free range chickens here so they don't need penned up at night but it would be kind of cool to direct the ducks into the garden when I want them there or run chickens OUT of the garden when I don't want them there, but without carnage when I'm not around...how do you train him to herd the chickens on command but not do so when he's not supposed to?

It's mostly maturity as well as constant working with her on it. She also goes hunting with dh so we have her trainer to find the downed birds. Which helped with the hold technic. Just like training with the goats or other lice stock i correct her for incorrect behavior. When she was younger she did kill a few chickens, a goose, and I believe a duck or two. I would deal with her harshly when she killed any animal. She would get hit with the bird and chased. She allowed to herd them or snap if they stealing her feed but that's it. When she was younger she couldn't be alone with them period. She now better about it i do catch her herding them when i am inside back to their yard but she hasnt killed any recently. I have to watch her during the first cold snap when she gets frisky from the relief from the heat. You mostly just have to keep up the work with them on it and draw that line they know not to cross. She keeps the birds out of my garden or chases them out for me when i ask. Her biggest issue is the hold technic sometimes she gets overly mouthy and other times she does great and just stands over them and the hens will sit and stay there but the roosters she has to be mouthy with they won't just sit there. When we go to get a certian bird like yesterday I had to correct her multible times for going after the wrong bird but once she went for the right bird I praised her and kept telling her to get him and hold him. Once I walked over grabbed him she was told thats enough and good girl. She got two eggs for a reward. Mostly it's just correcting and rewarding that worked for her. I use the same commands for herding the birds as i use for the other live stock. She isn't a very determined dog like the hang tree she has a point when she says she done. Mostly when it comes to panda but i can blame her panda goes for blood when she head butts. 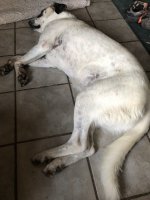 This guy has begun to show herding instincts at 16 months. Popular theory is that he’s part Catahoula. Definitely not LGD material but a nice watchdog and all round chore pal. Check out his spotted skin but plain coat

Blue Sky said:
View attachment 76246This guy has begun to show herding instincts at 16 months. Popular theory is that he’s part Catahoula. Definitely not LGD material but a nice watchdog and all round chore pal. Check out his spotted skin but plain coat

That's cool! Could be he has a little HTC in him, as Catahoula is one of the mixes there. He's very pretty!

Got the pup today and will post pics soon as I can. He's a pretty little thing and a very cool customer...not a single whine from him the whole trip home. He played with a water bottle, wandered around the car a little but then settled down for a nap between our seats for the rest of the ride home. He had a last suck from Mama right before we loaded him up, as if to say, "Good-bye, love ya, will sure miss you, Mom!"

Got to see the parents and both are beautiful. Mom is a red HTC from Missouri and she's definitely of that breed....intelligent, focused and pure poetry in motion. The dad is a blue merle BC from imported lines...he was watching the sheep the whole time we were there and never once came to meet the strangers. Didn't even acknowledge our existence as he was too focused on the sheep.

A few pics of the new herding pup...we've named him Dooley Darling. Today was encouraging when he started to hone in on a little duckling but stopped and sat down when given a verbal correction. He has not had official training on the birds yet...I'm trying things a little differently with this one as I don't want to hinder his herding instincts but want to direct it so he doesn't herd the birds on his own.

He also started to herd a hen, as he got going a little faster I gave a verbal correction and he sat down. Good response. I don't mind if he gently moves the birds, but to actively chase one is not going to be encouraged at this time.

These pics show his coloring, which shows the blue merle from his father but also some of the patterns one sees in the catahoula dogs in the mother's genetics. When not herding, he'll be working as protection for the bird flock and general farm help. He's scrappy and confident, while still being smart enough to be cautious in new situations...I like the potential of all of that. 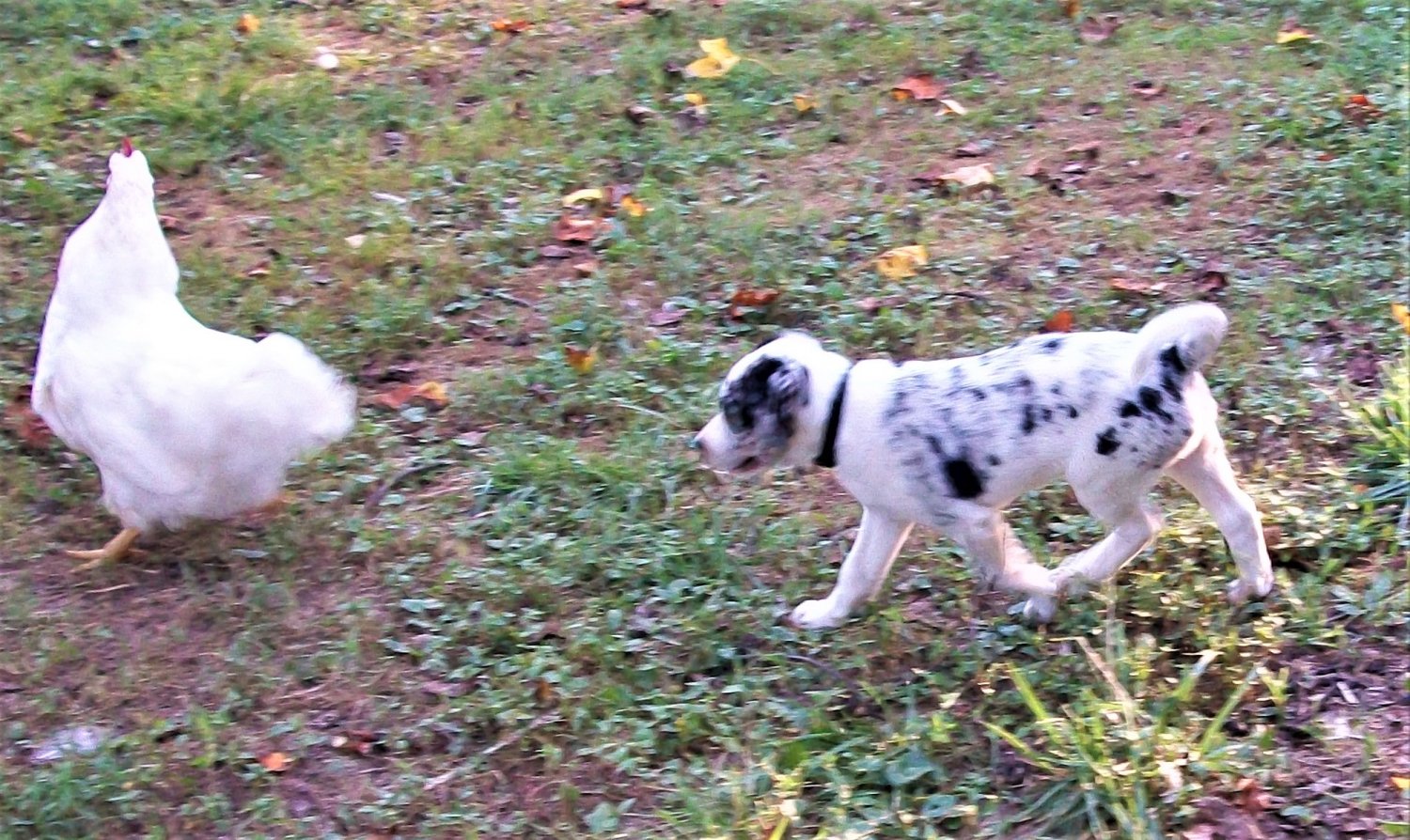 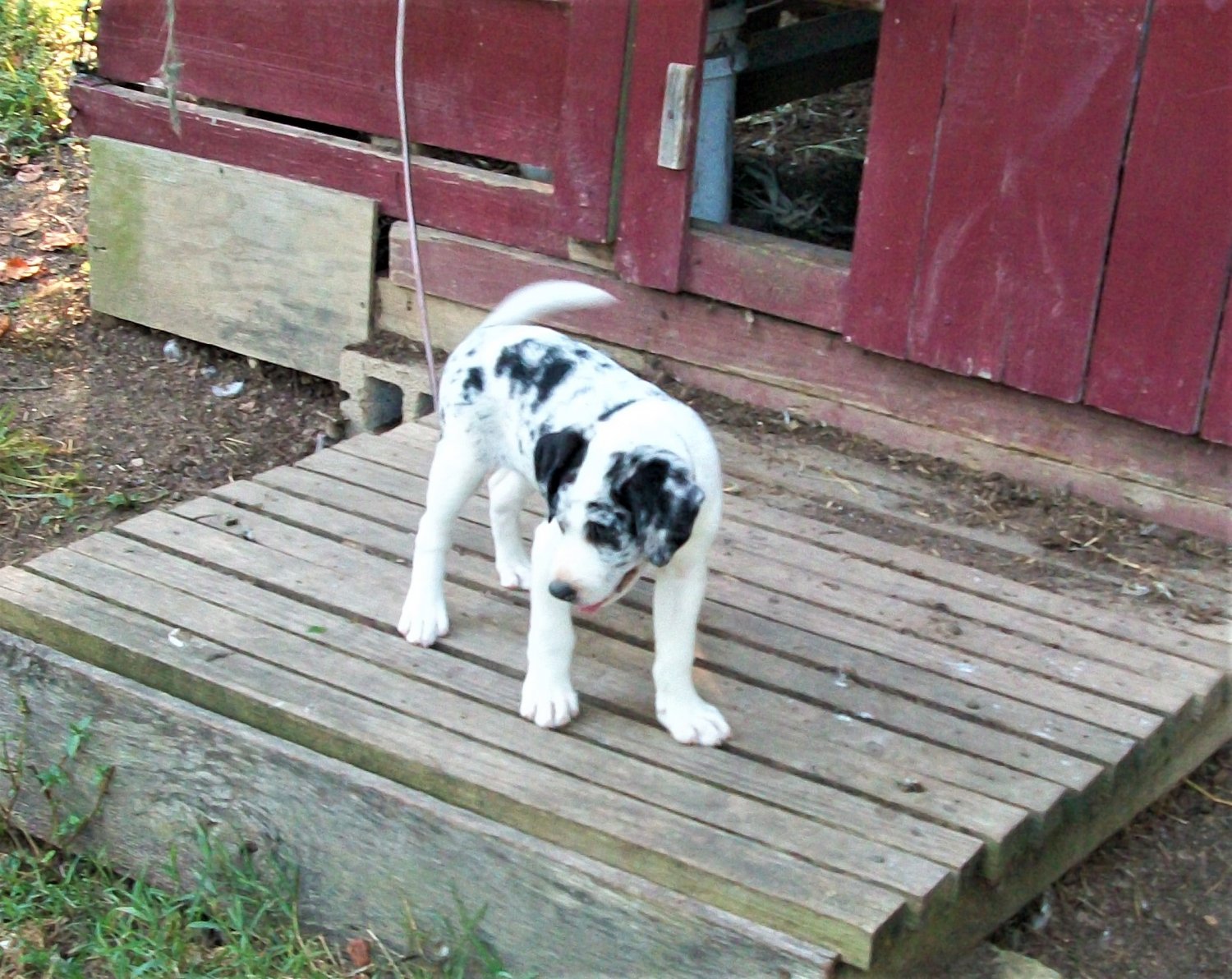 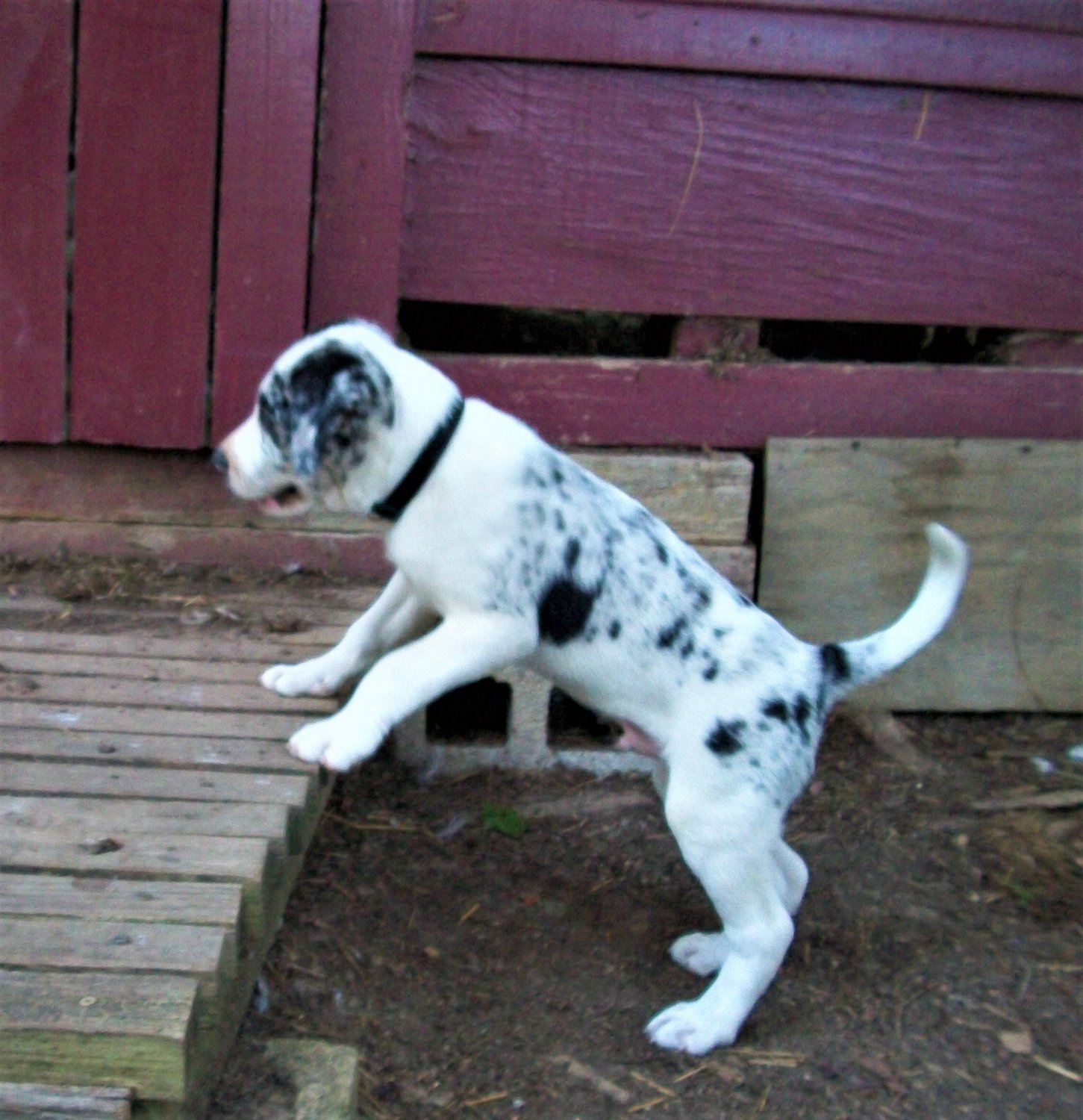 With his buddy, Ruffles, the cat... 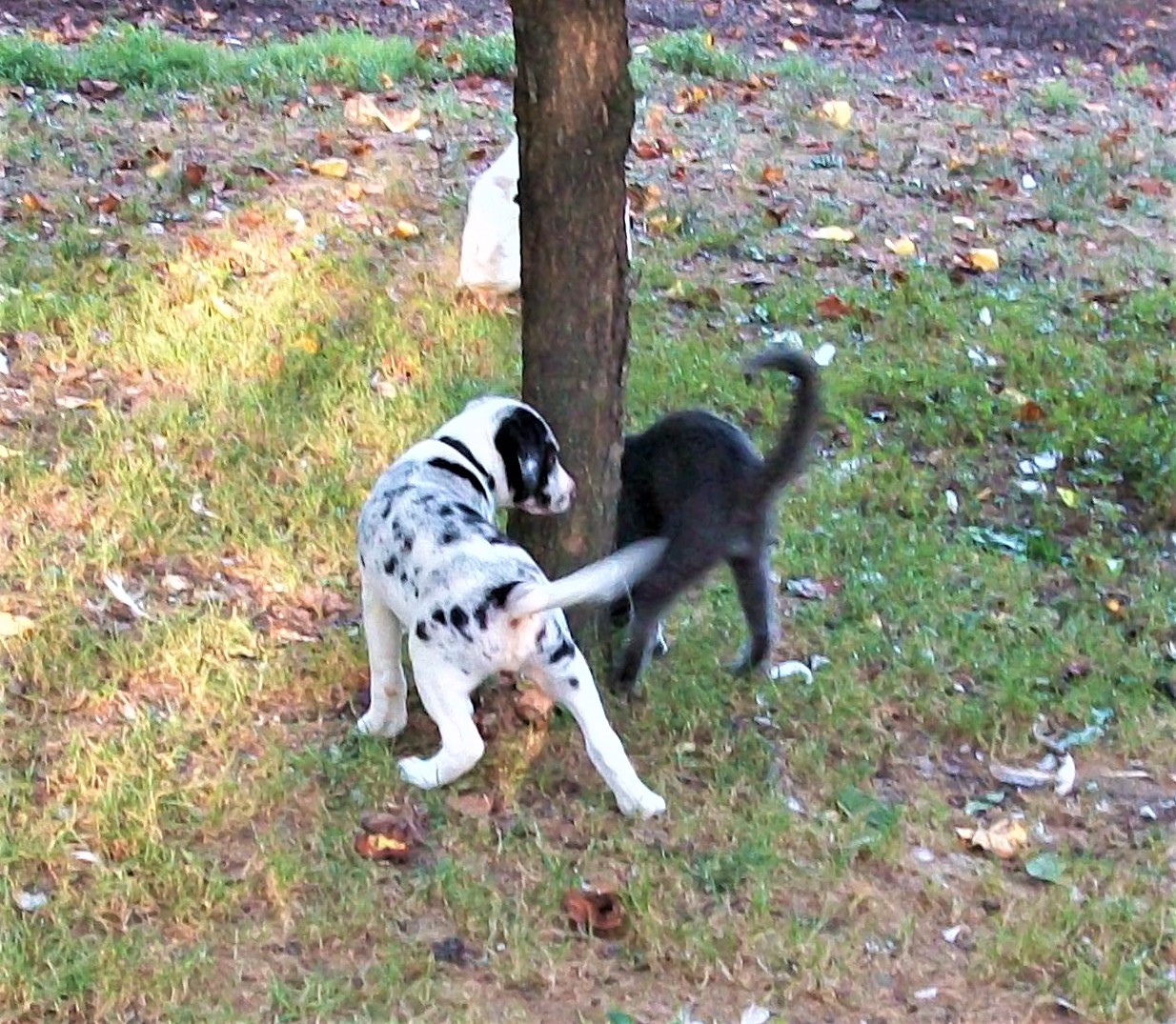 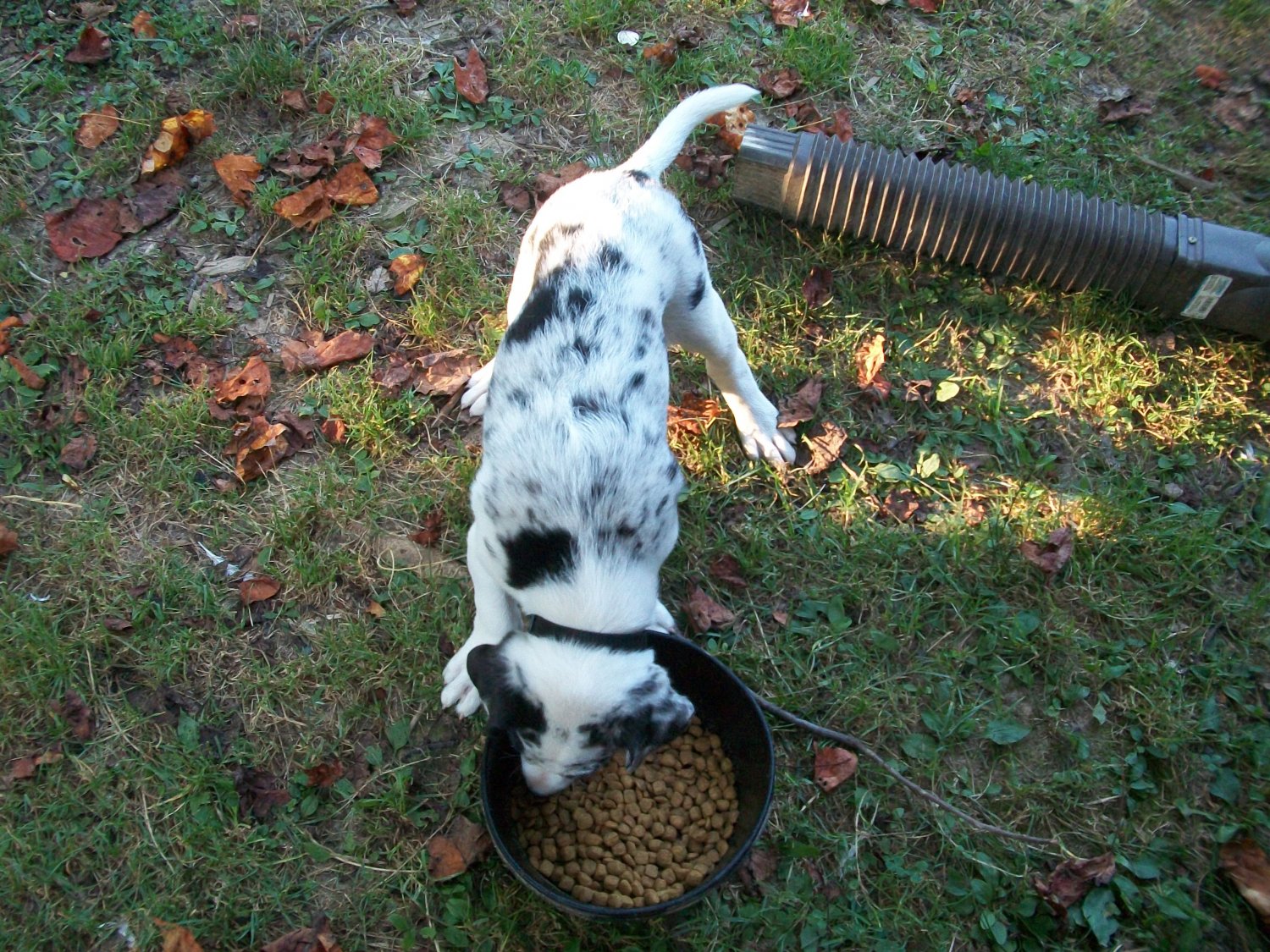 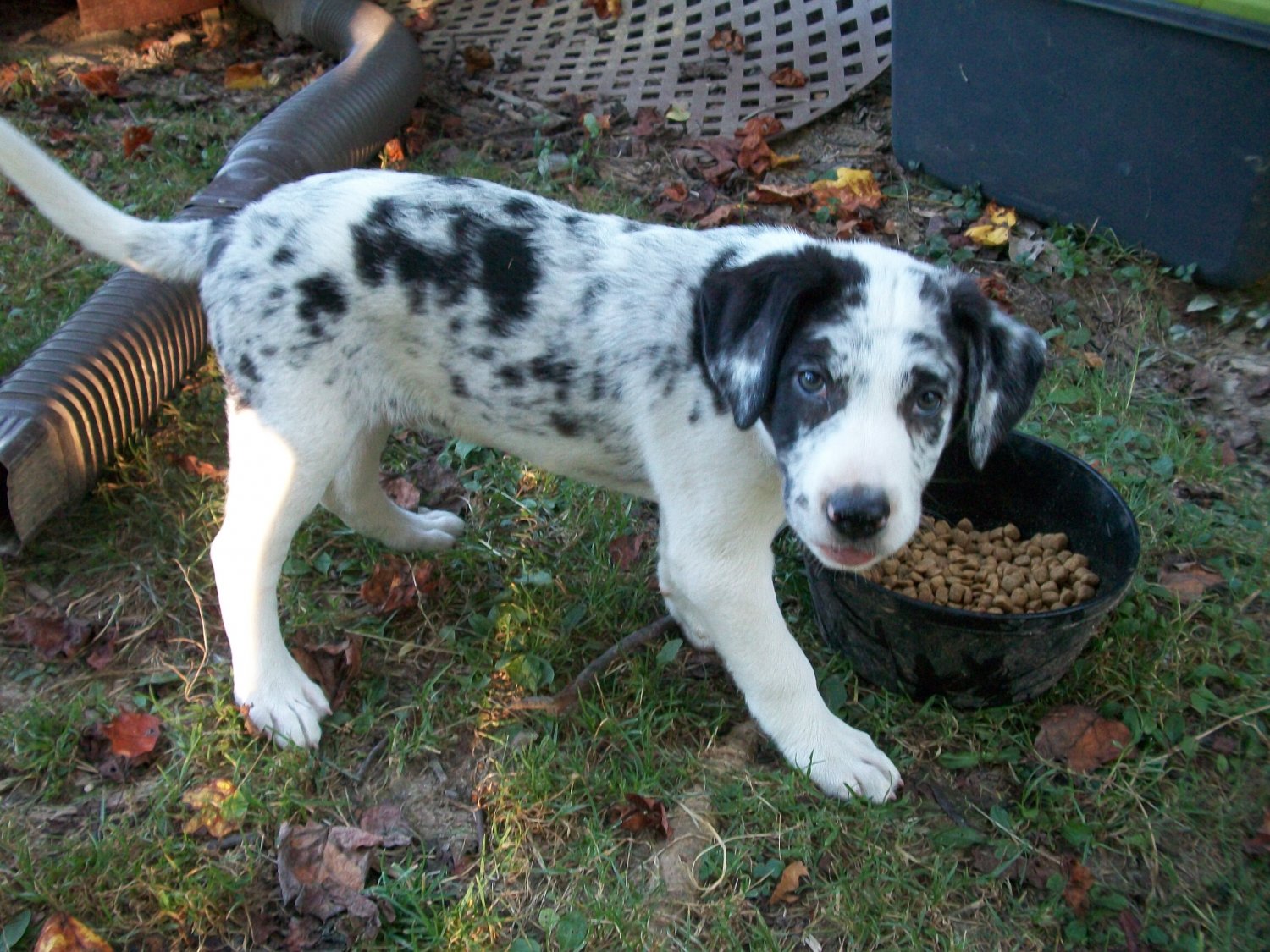 He's the first dog I've ever had that will cock his head when I'm talking to him...as if he's trying to figure out the language. It's kind of cute.
Last edited: Jul 28, 2020

I've heard of the breed - I am excited to hear about your experiences! What a beautiful baby

He is so handsome. I looked up some videos and showed dh them in action i love how confident they are. Shells could use that. She likes to work but she also go do her own thing there are times she doesnt want to herd probably the lab in her. Oh well most of the time she herds for me. I was looking for breeder near me so far all are in North Texas. So for now i have to stock you

which i do anyways so there that.

So far I'm pretty pleased with the temperament and intelligence of this pup. If he never turns on to herding, he will make a great chicken dog and all around farm companion. But, I think he will likely be a herding dog....his parents had too much of it not to pass it on.

So far he's easy to correct, fearless and confident, and has a happy little nature that you can't help smile over....I like a dog like that. He's tuned in, if that makes any sense....he listens to everything we say, cocking his little head as we speak and he actually listens, which is rare in a pup that small.

The LGDs are intrigued by him....Blue wants to gently play with him and I love seeing the "blue" dogs together. Looks comical! Charlie was instantly aggressive and didn't like him at all....had to correct her twice and I have a feeling she will have to be corrected much more severely when he's old enough to go with me on the chores around the sheep. In a fight, she could really injure him, even as young as she is....she's not smart enough to pull her punches even during play time, so it's likely she wouldn't when attacking this dog. Of course, being a young puppy, he is blithely unaware of her hostility and just wanted to sniff her and play with her...she was not amused.