Dooley is coming along in his training and he's starting to "turn on" to more herding type behavior with the sheep....just tiny changes, no attempts to herd or anything. He's no longer scared of them and will occasionally bark and bounce at one that is getting too close to whatever I'm working on. He'll stand down when told to do so, on both chickens and sheep.

We are still doing leash work and he's doing well with that. Down is still hard to get into his brain case on a consistent basis. He'll sit down readily at the appropriate times, like at gates, when I stop walking, etc., but I have to make him lie down if I want him down all the way. He's getting good at stay and we'll continue to work on that.

I'd still like to see more actual herding desire in him, though I understand that may come later. I'll probably be glad it comes later as he'll likely be easier to rein in then than now.

We really love this little dog...he's got such a joyful, sweet personality and he fits in well here. Not much barking at all, just little yips at the cat or sheep when in pouncing, playful mode. We like that too...we don't like a mouthy dog.

He GOT it! By Jove, I think he got it! (My Fair Lady....er... Puppy reference) For one, Dooley started herding behavior with the sheep this morning~a first~ and stood down when told to do so! DING!!!! That will DO, Dooley!!!!

He didn't start the herding until I was near the sheep and then he started trying to round them up, hitting them with an open mouth here and there, barking and pouncing....all very lightly done but he definitely had a purpose in mind...he was going to move those sheep. When they faced him and stomped, then he would hit them with the open mouth...not a nip, exactly, but more of a boop with teeth~very fast in and out. It all lasted just a matter of seconds before I called him off with a "that'll do!" but it was definitely an attempt to move the sheep.

Then, when I was dishing out his food, I turned around to find him lying down at a distance from the bowl with his head completely on the ground. Another first!!! Usually he'll sit down and I'll have to push him into lying down for that and then, while lying down, I hadn't started teaching him to put his head down on his paws or the ground also. Just lying down was the next step but I was starting to think he wasn't going to "get it" like my other dogs have done....mostly because he doesn't have an older dog showing him how to get the food quicker, by lying down. But, to have him lying down...ALL the way down...was a good thing...I didn't have to say "down" nor have to make him lie down. He got much praise and loving for that one!

I think things are starting to click for young Dooley! Makes me excited for the possibilities and hoping he continues to impress with learning the skills we need him to learn. I love it that he has an off switch and he also has lightning recall....no matter what he's doing or where he's at, when I call he scrambles to get there. I hope that continues as well.

Oh wow! Progress! That is wonderful. I know you are thrilled and excited. He started working sheep AND obeyed when you called him in.

Then to lay down without being told at feeding time is awesome. He is listening to you, mulling it over in his mind and deciding that you have some good ideas. What a smart pup!

Let Dooley have a little fun with the sheep this morning...just a little. I wanted to see if he knew what to do with them once he got them moving. He put half the flock into a pen and was holding them there easily, but then I sent him off to get the other half~the older ewes. They were not so easy to pen, so he started getting frustrated and I called him off....took a few calls to get him settled down to come back and get down. He only attempts to herd the sheep if I'm out there and he's showing some good instincts, though doesn't know a bit of what to do with them....that will come later. I just wanted to see what he's working with naturally....I really think he's going to do well with training and that excites me!

It tickled me to see him stand up to our meanest ewe, who tags our LGD every chance she gets for no reason at all other than she's a meany pants. She stomped and lowered her head, he went for her and she tagged him slightly. Didn't phase him a bit, he bounced right back and nipped her side. Then she decided she would just ignore him....but that didn't work, so she moved. I had a grin so big! That was the one sheep I worried about, that she would hurt him and scare him off sheep, but he doesn't have scare in his wheelhouse, apparently.

I called him off and settled him down. He really wanted to get that meany sheep again but Blue came across the fence line and put one big paw on his body, as if to say, "Enough, little guy!" Blue is real good on schooling young pups, but he does it gently, using his paws to hold them down or knock them down. That switched his gears and he started playing with Blue instead.

Just a little episode for our entertainment and it was fun to watch this little pup moving those sheep. Small, but mighty and has plenty of courage.

A little while after that we moved the sheep to a new paddock that was a little distance away and required us to lead and drive, as they can get distracted and want to stop in the paddock in between. I kept Dooley on the long line for that move and kept us both at a trot behind the flock so he would get the idea that we not only bring the sheep, but we drive the sheep. He did great! Easiest move we've ever done to that paddock.

I'm excited about this little dog...I see great potential for helping us here and that fills me with joy! 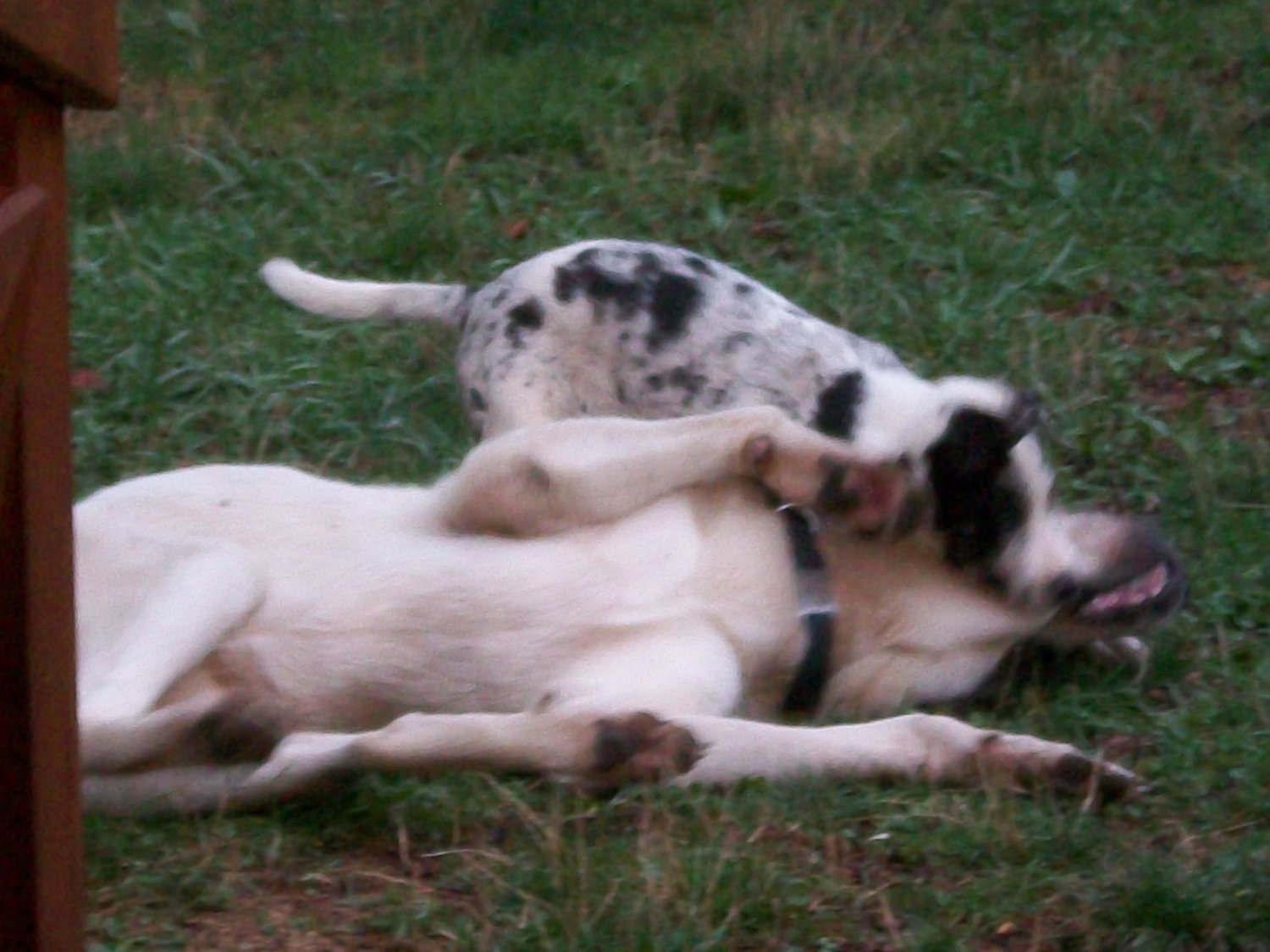 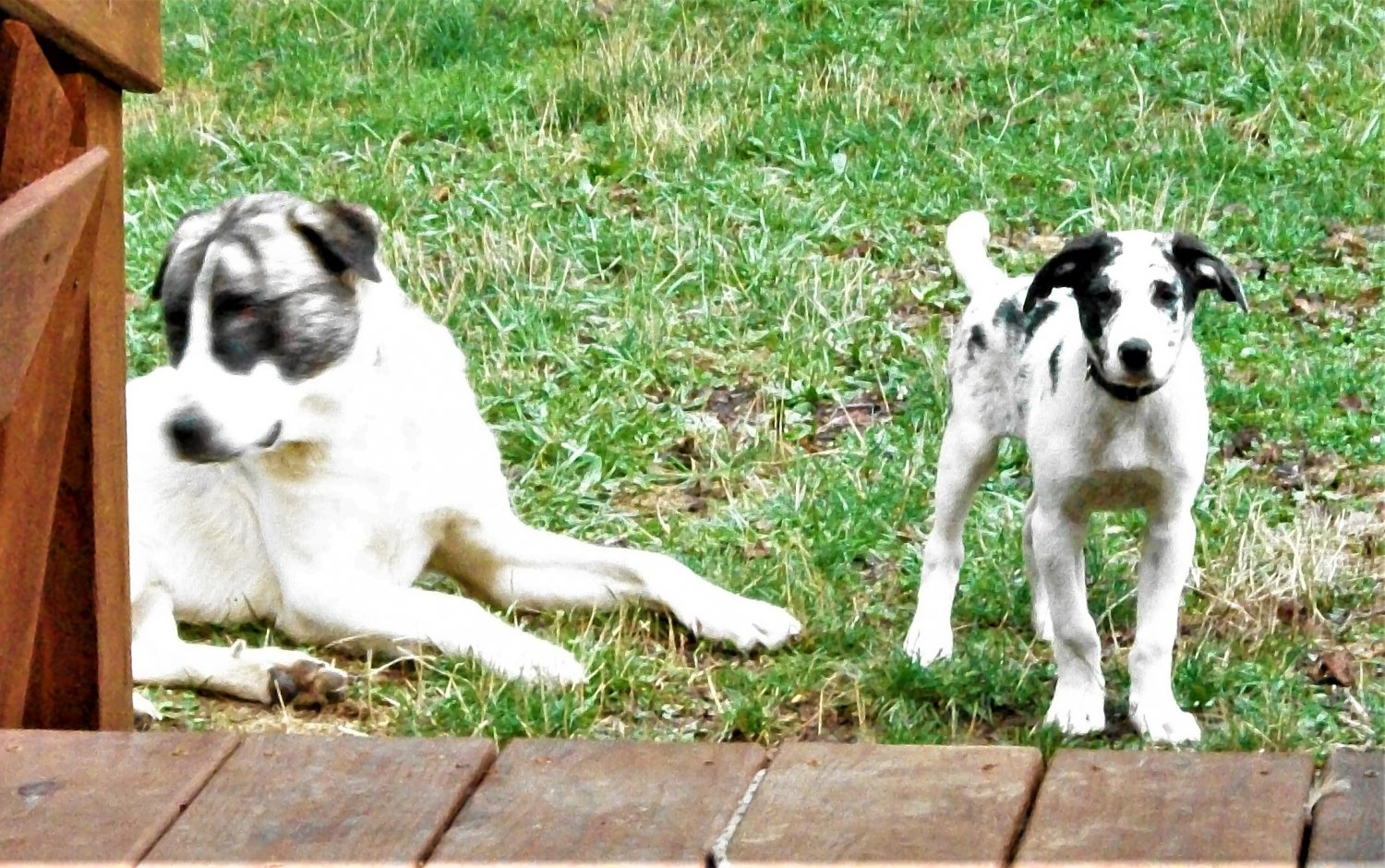 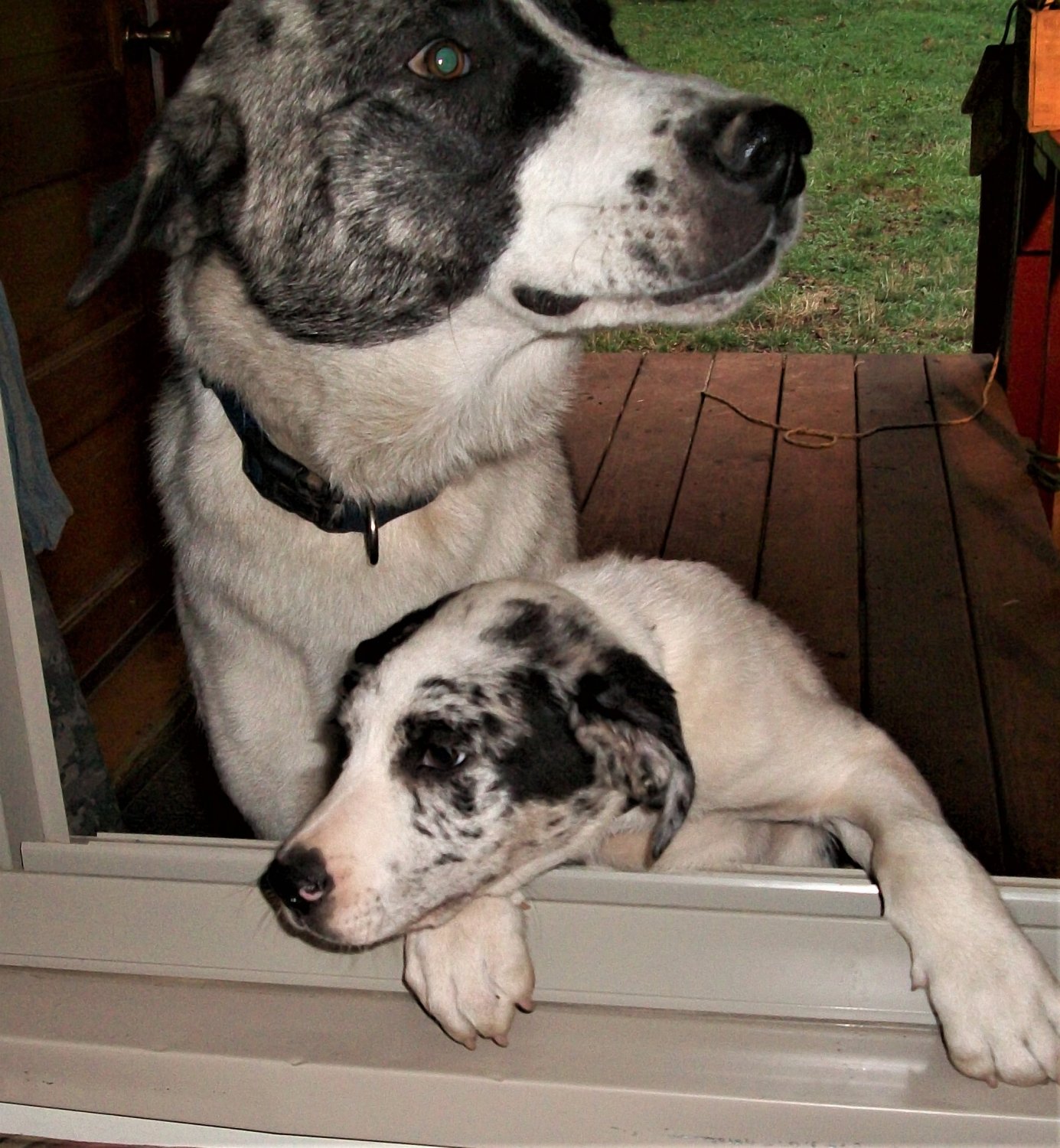 Practicing down at the gate.... 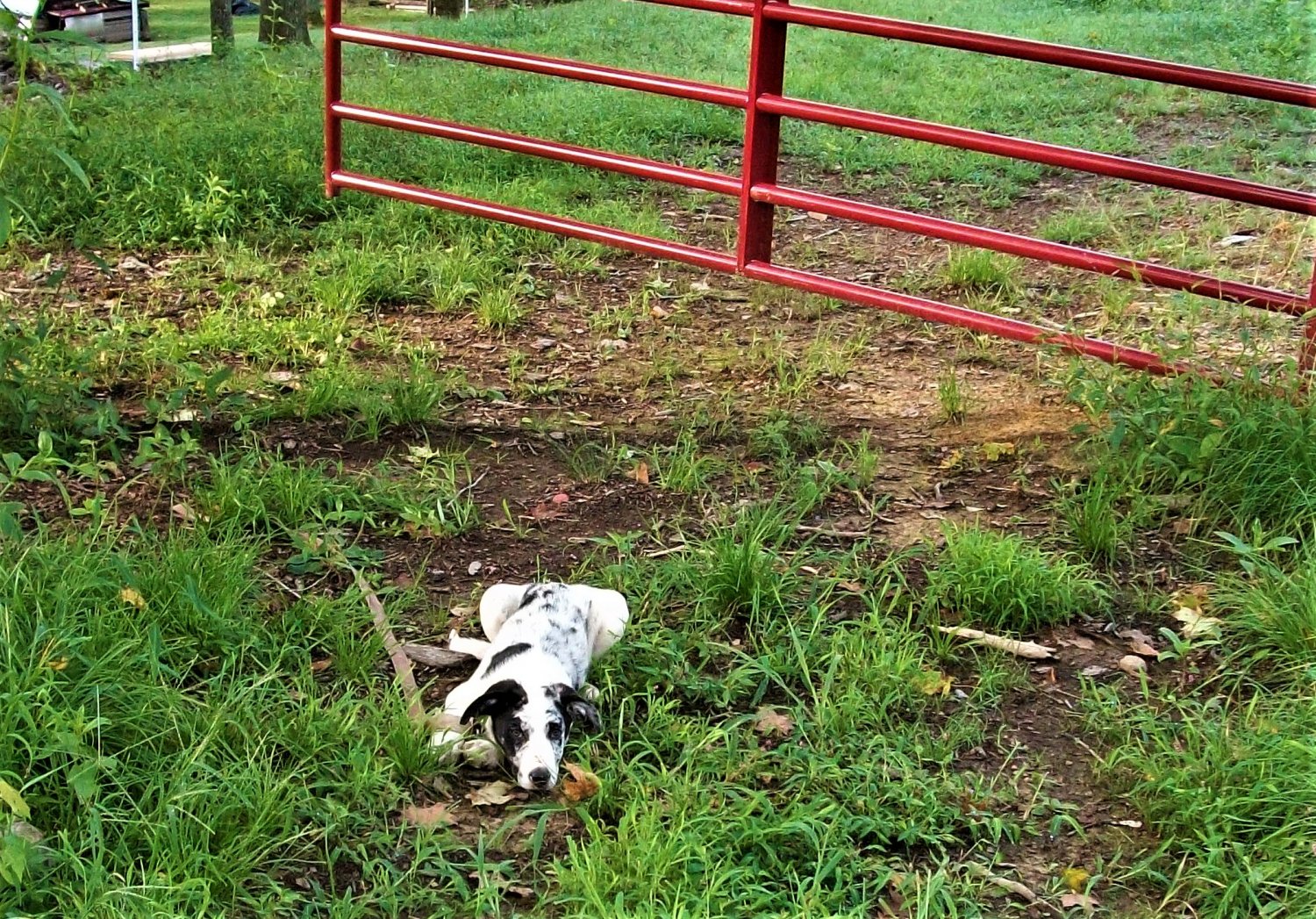 That put a smile on my face. I love it that Dooley and Blue are such good friends. Dooley did good on moving the sheep. And he made the mean ewe move her feet!

I so enjoyed reading this!! Dooley is adorable and I'm sure you are very proud of him. I wanted to ask, the herding behavior you described is exactly what Magnum does with our goats. He runs up beside them with an open mouth once they move to where he wants them, he stops. So he is trying to herd them? Does this change anything about how I should train?

ChickenMomma said:
I so enjoyed reading this!! Dooley is adorable and I'm sure you are very proud of him. I wanted to ask, the herding behavior you described is exactly what Magnum does with our goats. He runs up beside them with an open mouth once they move to where he wants them, he stops. So he is trying to herd them? Does this change anything about how I should train?
Click to expand...

Yes, it's bad behavior for a LGD and I addressed that in your thread. That open mouth is a concern but that he actually stops when they get where he wants them gives me hope for him.

Can't wait to hear more about this training adventure

I'm waiting for this heat and humidity to subside, then I'm going to have to start working this dog daily and hard. He's "turning on" now and he needs a job to do, as he's making the cat miserable and he also really wants to work the sheep and poultry. He's going to make an excellent critter gitter for the farm, as his prey drive is increasing daily. I love watching him stalking the cat but he's getting a tad too rough, even for the cat.

He's bored and that's never a good thing with these herding breeds, I gather. Time to start intensifying his training and his daily exercise. I don't know that I've ever had a dog with this much jitterbug in his skin, so it will be a challenge for me to work him enough to settle him down.

He's excellent on the lead now, does well with sit and is still needing work on stay...I think that will get better if I can ever exercise him enough for him to focus well. He's getting down and stay at the gate pretty well, but is still easily distracted by the other dog, the sheep, etc. Just puppy stuff, really, so with time and repetition he'll settle down.

I can't let him go with me to the sheep paddock without him being on a lead now, as he really wants to herd those beasts. On the leash, he's fine, walks politely, sits when I stand still, lies down and stays, etc., but take him to the sheep without that leash and all bets are off for a bit. No more off switch now unless I say, "That'll do, Dooley!" and then he'll come to me. He's had the wool in his teeth now and there's no going back!

Funny thing is, the sheep always cluster at the gate to each paddock when they see me coming but now if they see that little pup running towards that gate, they back off the gate...WAY back. I like that. I'm going to need him to hold those gates for me when I drive the ATV through there, keeping the sheep from rushing out.