Hello and welcome to my BBQ thread.
I will try to keep this thread active as possible.
If you decide to contribute to this forum, please keep
the subject within outdoor cooking relations.
Either it being tips or tricks, or you wish to share recipes.
Please stay within the BYH guidelines with your contributions.
Or just sit back and enjoy the thread. 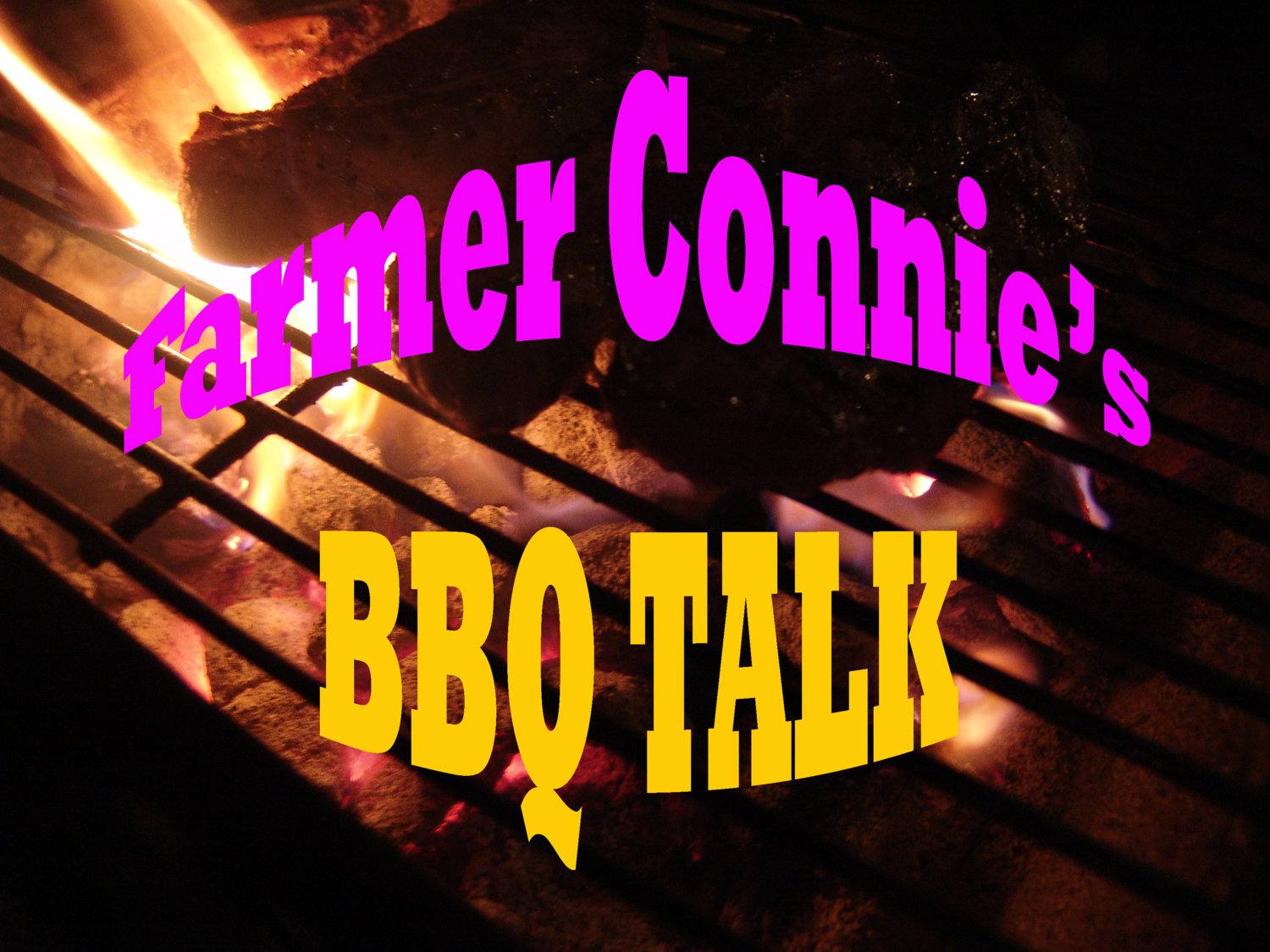 Will contribute tomorrow or maybe late tonight, but here's a teaser. I have to do the pork, chicken and sausage..my sister is doing the beef brisket. I'll also be doing the home made ice cream. 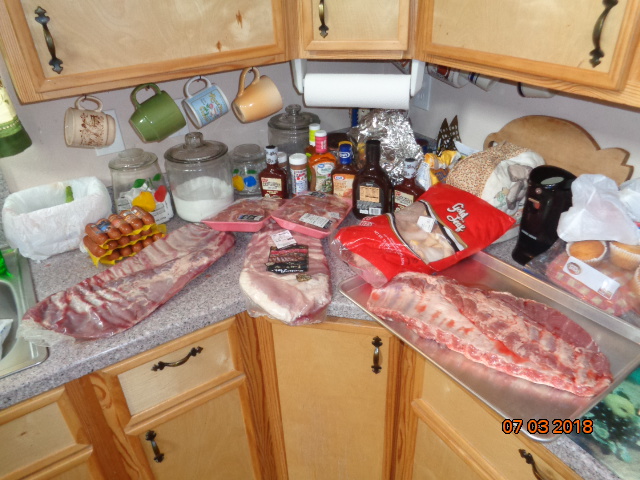 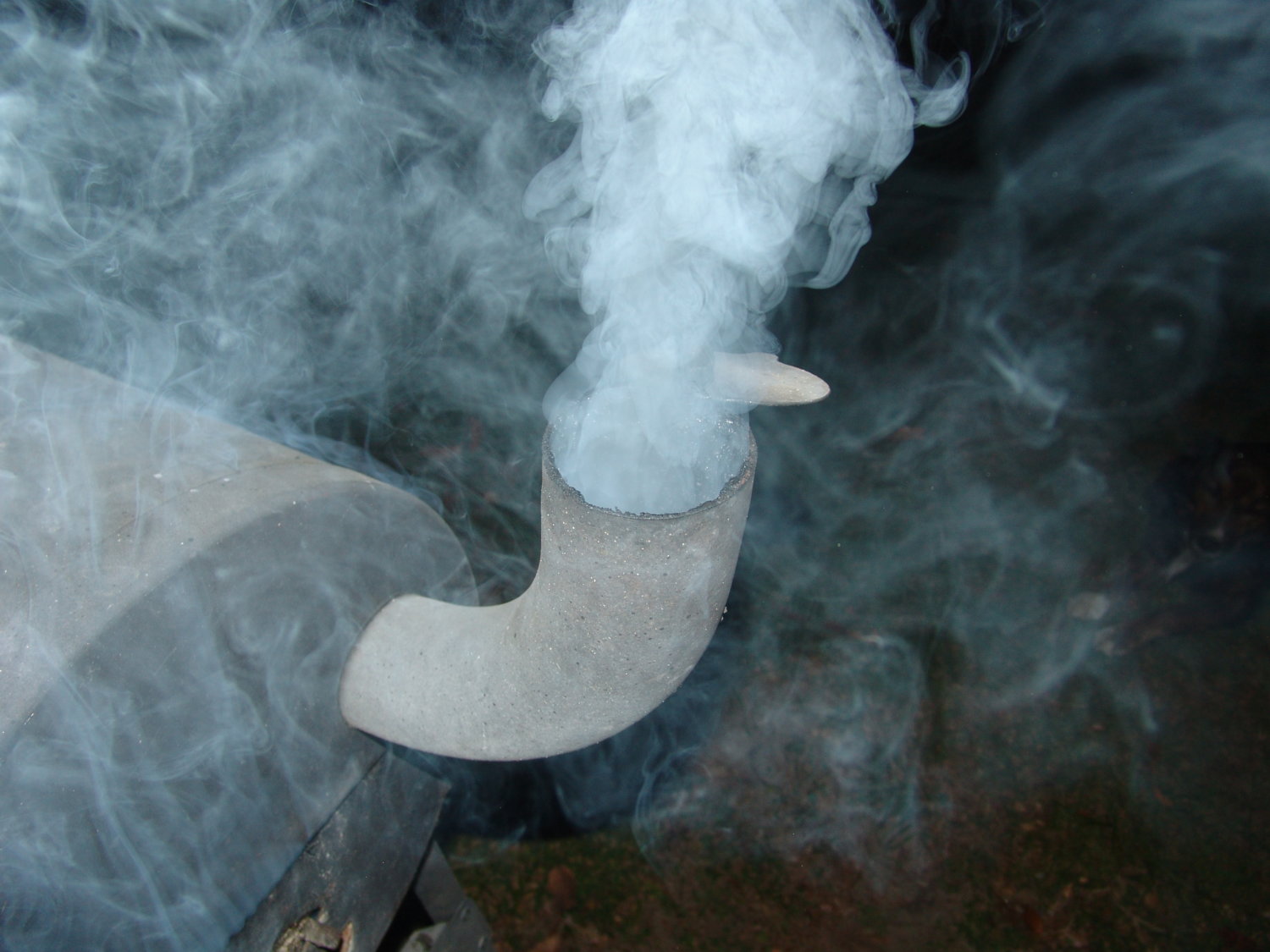 I created this thread to help with anchoring myself over here on BYH a lot more than I should/could have been all awhile. BYC has gained most of my attention lately. I thought perhaps by starting a subject here on Herds that would attract peeps whom share the same interests and passion for outdoor cooking as we, that would help me dock my ship here a whole lot more often. My dear hubby does most of the outdoor cooking so that gives me plenty of opportunities to point and click a camera. I think it is fun to share some of the delicious dishes as well as learning new and exciting methods and recipes. Also there are perks to being swine breeders- the yields keep us smoking!

To keep the ball rolling, I for the moment have only recent past photos to share. Within the content of my posts I shall word them as recent past or present.

Starting with a recent past smoking-
The smoker on the left is a modified Brinkman water pot smoker (2 of them stacked). It holds 5 racks vs 2 racks as used as a standard cooker. 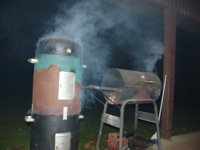 ​
This particular day it held 3 cured hams and 2 pork bellies.
The smoke-slow cook process started that morning and ended around 11-12 that evening. The yield was intended for freezer stock.
The hams were placed down near the heat-just above the water steam since they needed to be cooked to 140*F, and the bacon was way at the top to give it a nice crust and pink smoke ring. 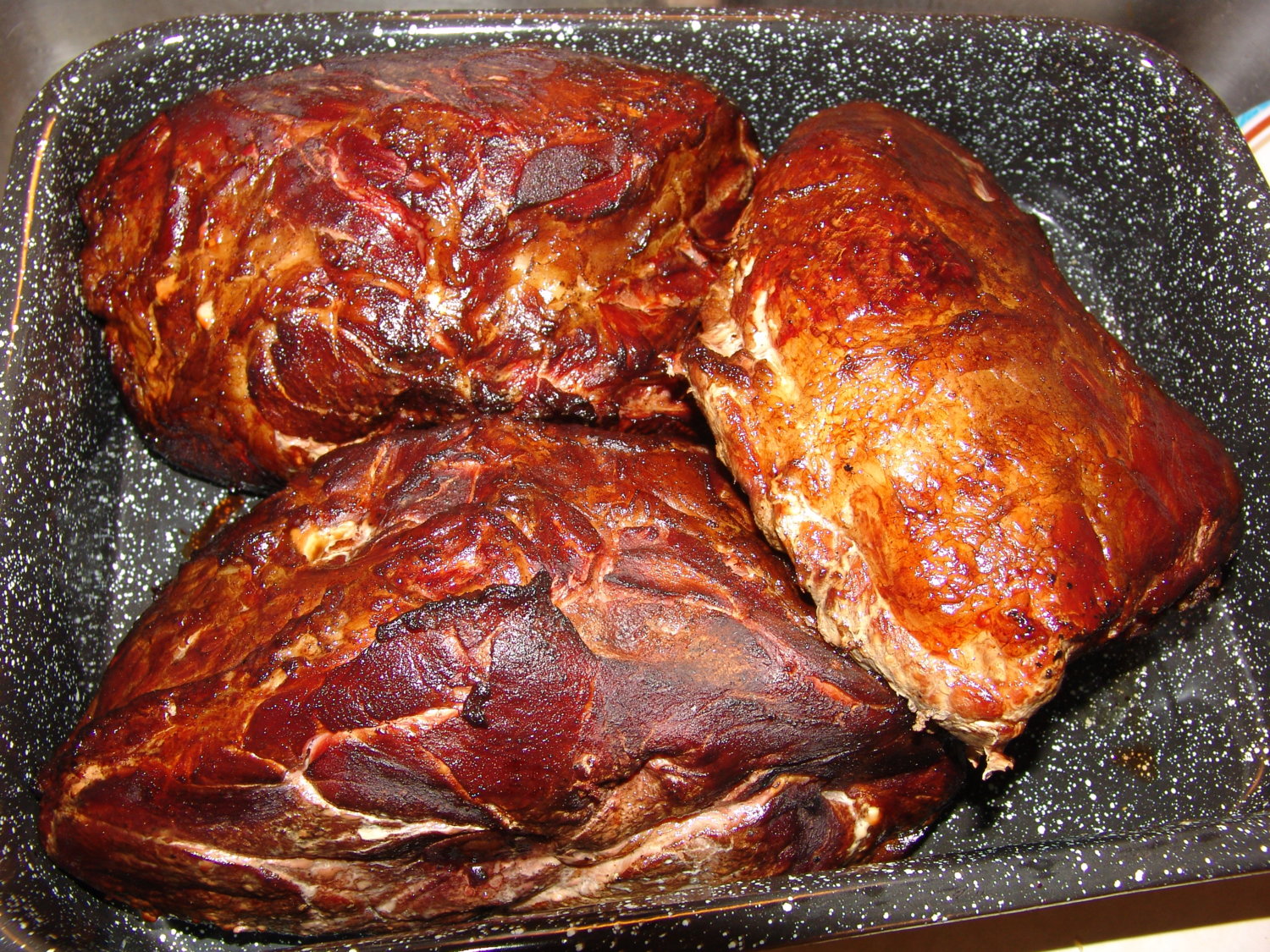 Once they cooled, they were sealed in food saver vacuum bags and placed in the freezer. We feel the pork we raise and smoke for hours, by letting it rest in the icebox, the flavors really merge together- since they were marinated by injection. When we warm them up for consumption, we place the sealed food saver bag in a large double boiler pot. That way zero juices reduce from the meat. 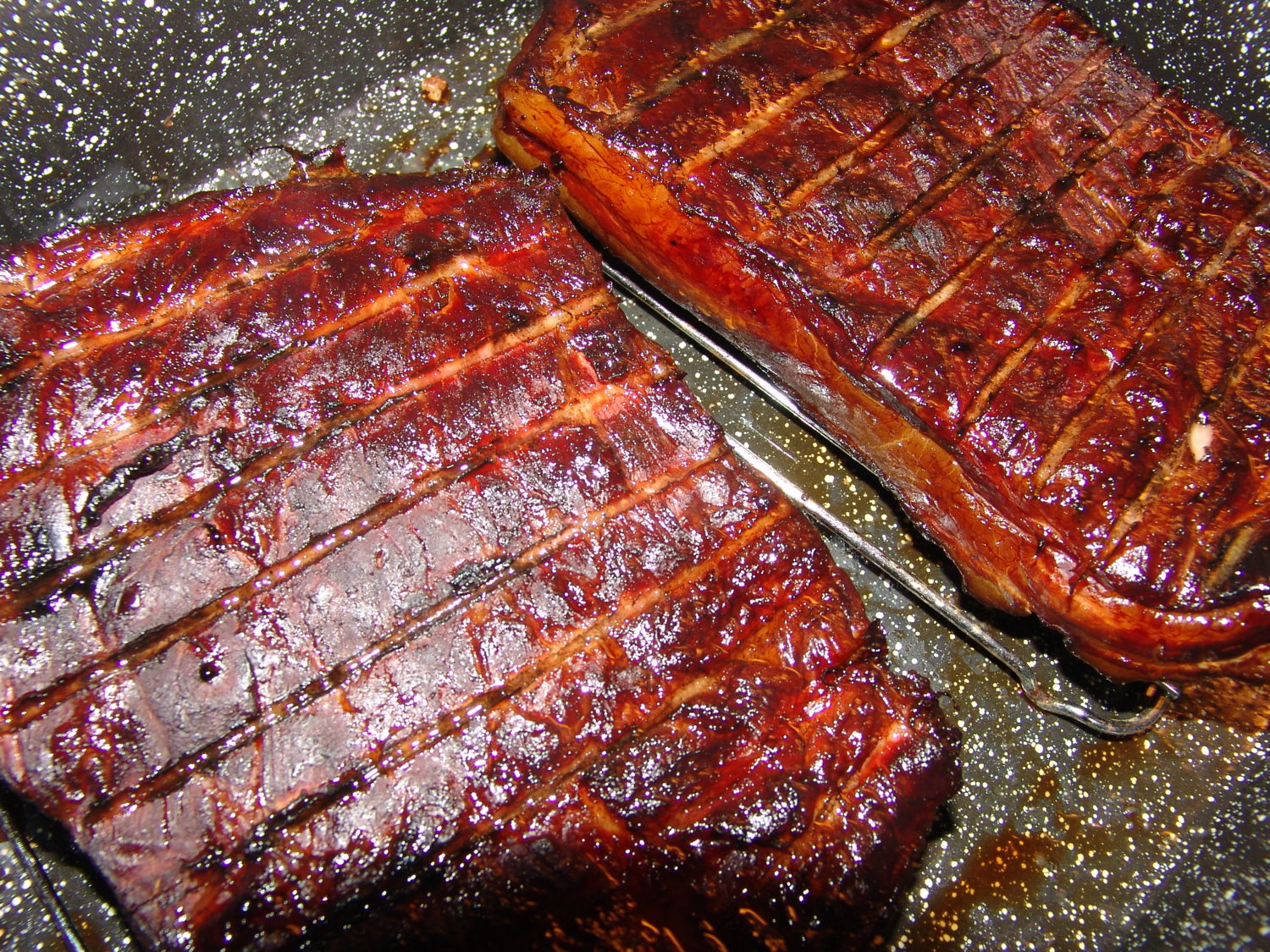 Now the Pork Belly can be called Bacon. Bacon doesn't make it to the ice box. It is an endangered species here. The rewards of being a pig farmer. Always inventing new ways to incorporate bacon into another dish.

So back to the thumbnail pic at the beginning of this post. The horizontal cooker on the right had pork steaks searing- then off set (indirect cooked for smoking).
Supper was a quick wam bam thank you mam with the steaks and it helped scratch the itch by satisfying the craving of BBQ because the Hams & bacon slabs were for the future. How can you smoke for 14 hours and not go nuts wanting to taste something? Pork steaks- 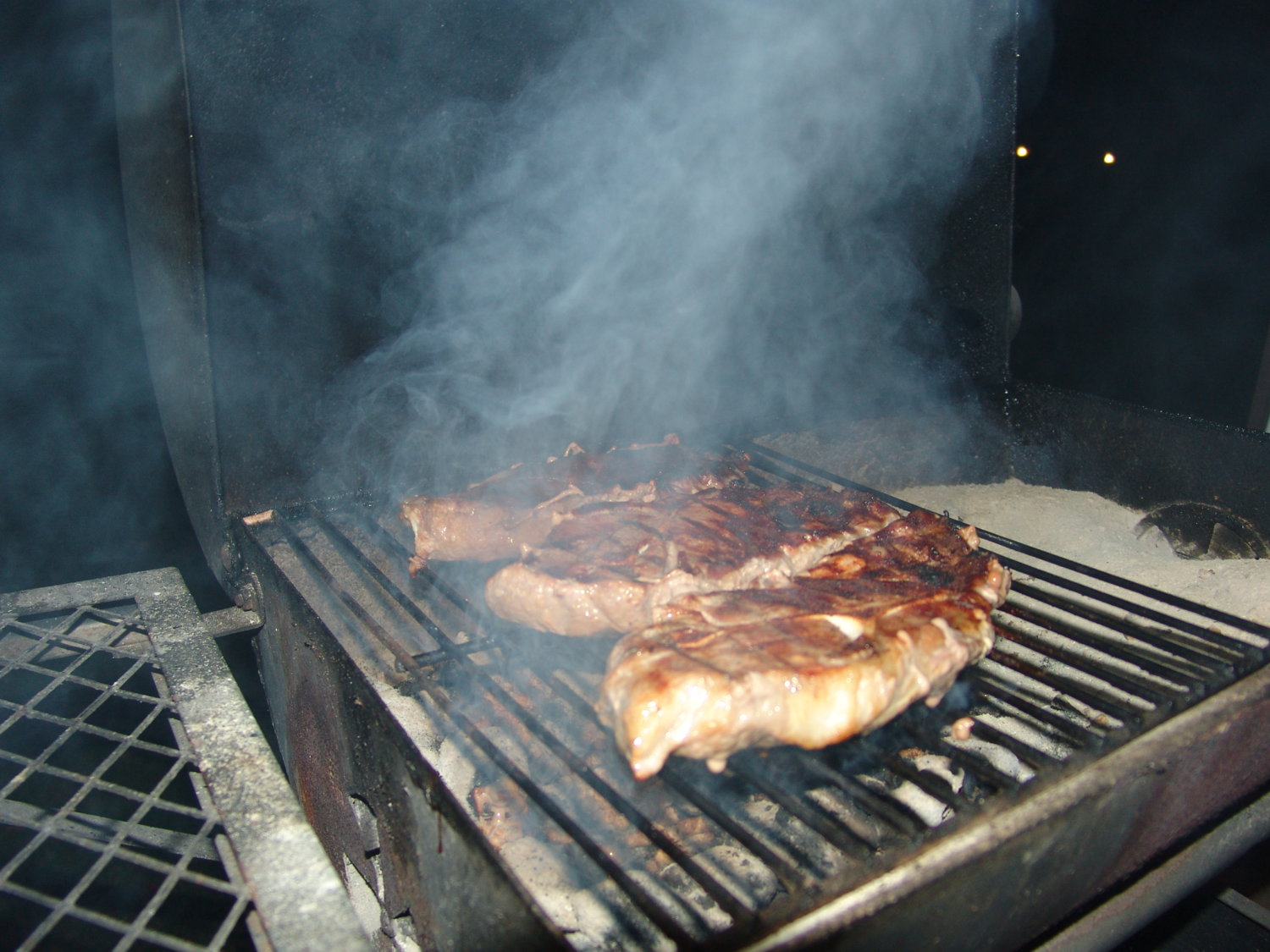 After the bacon rests.. time to reap the sow. 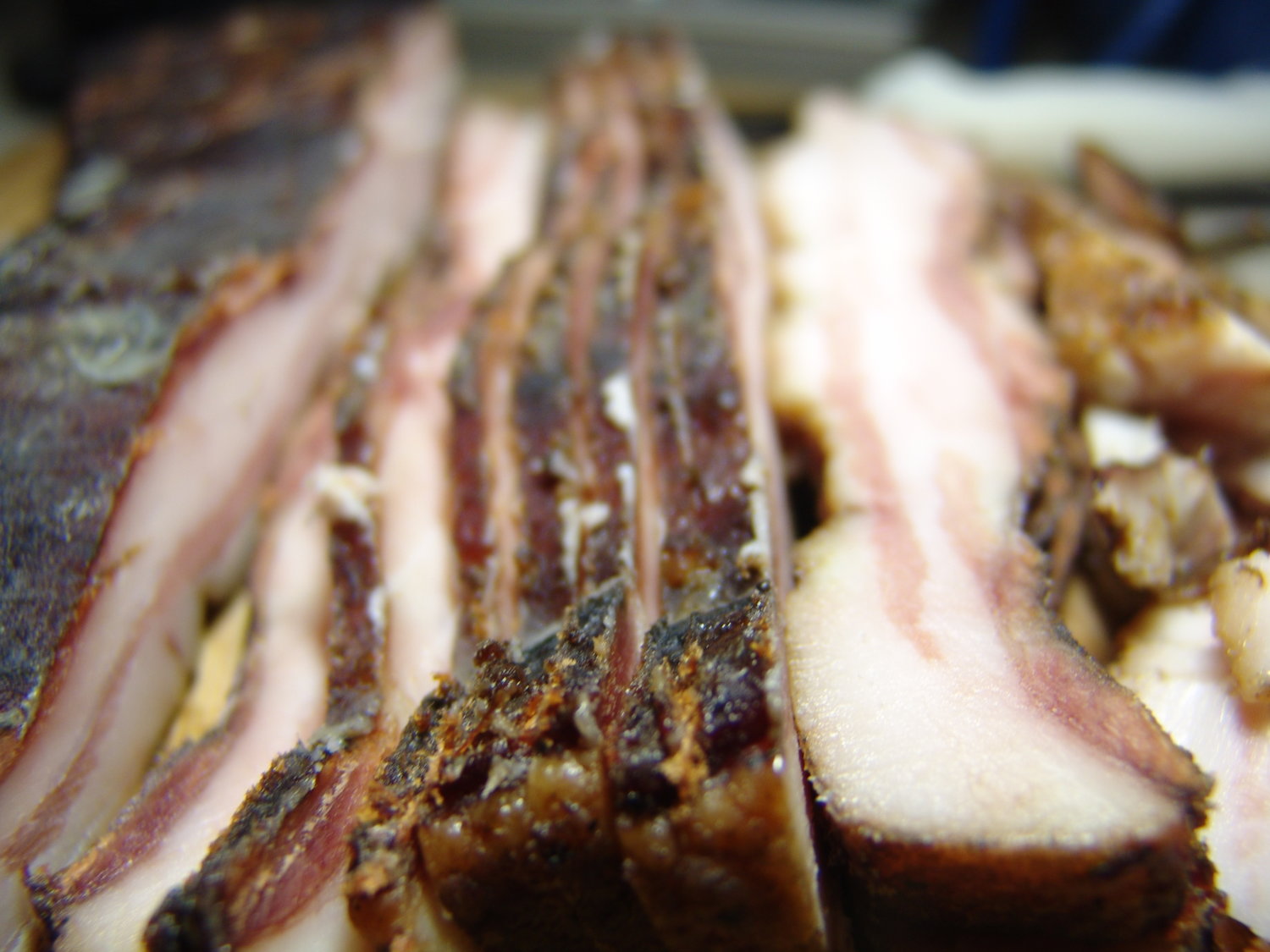 greybeard said:
Will contribute tomorrow or maybe late tonight, but here's a teaser. I have to do the pork, chicken and sausage..my sister is doing the beef brisket. I'll also be doing the home made ice cream.
View attachment 49938
Click to expand...

Now that is a feast!

That all looks absolutely delicious! I love the modified Brinkman smoker - it says you're serious about smoking some meat!

It does all look delicious. I think bacon tastes wonderful even wrapped in bacon.

Well, woke up early on Independence Day, to a steady downpour..well, not a deluge, just slow steady rain and it continued thru out the morning until afternoon. Since the bbqing was to be done at my eldest sister's place, and her smoker/grill is made of oilfield pipe and thus weighs about 600 lbs, no wheels and the ground was soggy, I couldn't move it under the carport with the tractor without rutting up her yard.
Onward thru the fog. My youngest son met me there at 8am and we got started. My sister did have 2 small grills she did the sausage on and other sister did some other meat at her home across the street before arriving at noon. Fire, smoke, dead animals. This, is why we are at the top of the food chain. Because of the rain, and everything was already seasoned and marinated, we decided to just put a light bark on both kinds of ribs and the chicken, then individually wrap each in foil to actually cook. I did not get a lot of pictures because of the inclement weather. I ended up doing only 2 slabs of ribs, as there was a death in the extended family and some were not going to make it to the gathering, and I never could get a firm count on how many were comeing..bounced between a firm 13 people to as many as 23, then back down. Ended up with 16 there today and we had plenty to eat.
My son at the pit. He and I were both already soaked pretty good by this time. 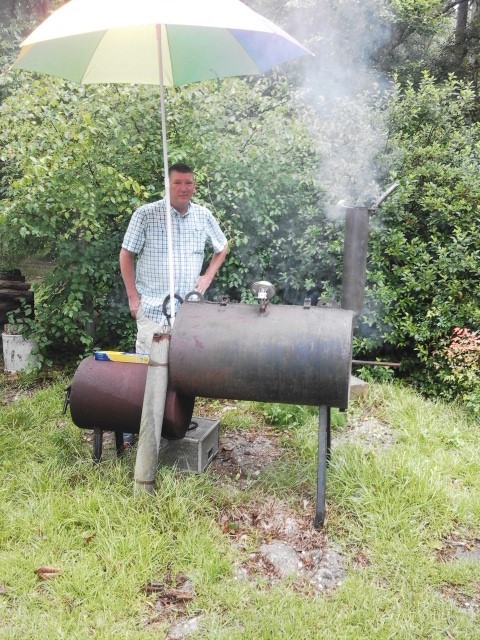 2 slabs of ribs and about 3 lbs of country cut ribs. 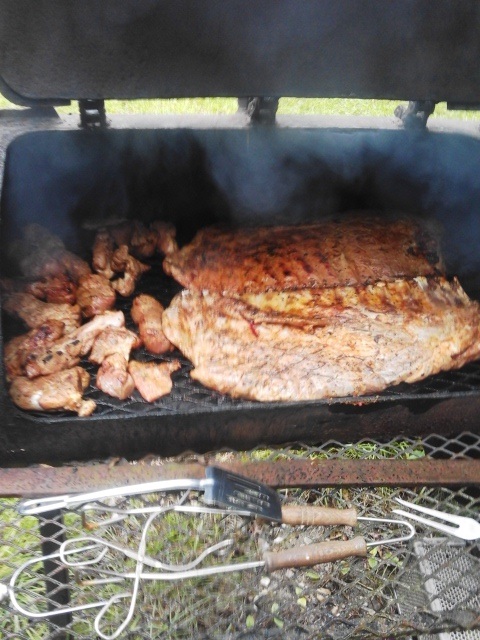 I do not add bbq sauce until the meat is almost done and I'm not real fond of sweet bbq sauce, tho I did have some honey type sauce my wife likes on ribs.
I had bought several different bbq sauces, and son#3 had brought some, which I recognized from my days of living in S. La. (until very recently he still lived in Lafayette and is married to a wonderful Cajun girl..they now live in Tomball Tx)
Jack Millers is the name of the sauce he brought, and it is a 'basting' sauce according to the label. Until you shake it up, the top 1/3 of the bottle looks and feels like grease. I would put it only a couple notches above what is arguably the worst bbq sauce ever made, the infamous Pig Stand bbq sauce. However, I deferred to his thoughts, since he was doing most of the wet weather work and we did use it on the ribs.
Jack Millers:

Since we weren't really smoking the meat, and needed it to be ready by a noon30 serving time, there was no 'low and slow' today and we kept the temp between 250-325 degF.
We did end up leaving the ribs on a little too long. Were able to get them off without the slabs falling apart, put I did have to be very careful when cutting them into serving size portions. 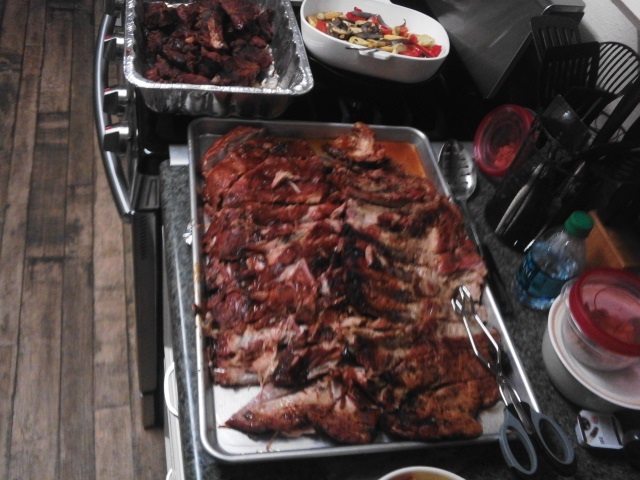 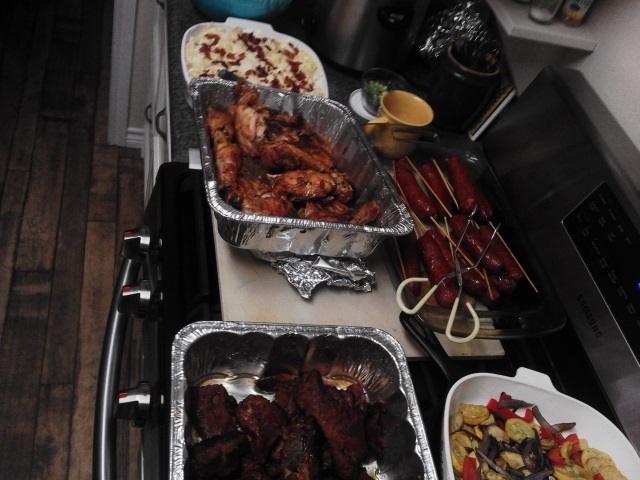 There was a screw up on the sausage. I had 3 five packs of links I really like and my eldest sister had said she already had some as well, of a different kind. When I got there, as the sausage was already smoked as it came from the store, it would be the last thing on the grill. When I got there and unloaded everything, I handed m niece the sausage and told her to put it in the refrigerator. Unknown to me, the frige was chock-a-block full, so she put it in a cloth grocery bag, came back out and laid it on the table under the carport with a bunch other stuff and didn't tell me. When I went in to get it from my sister, sis told me she "had already took care of the sausage and did it in the oven". When we ate, I got one of the links, which my sis had put sticks in, and found it way more spicy than it should have been and my b-i-l said they were awful hot for that brand of link. It was only when son and I were cleaning up and putting everything away so sis could get her truck back under the carport that I found the 3 packs of sausage in that red bag. I had gone light on my seasoning of all the meat because my son has bouts with gout and one of my b-i-ls has Diverticulosis so spicy sausage was off the menu...that sausage my sister put on the skewer sticks was pretty dang hot..some she had bought.

The ice cream. Worked out pretty good, tho still a far cry from Blue Bell. I did have trouble with my churn. The plastic gear at the top of the can and it's mating gear in both the hand crank and the electric unit kept jumping the teeth. A fairly expensive unit, 1 1/2 gallons and I haven't used it but a few times, but it did finally freeze and I got to use my 1947 Hamilton Beach malt mixer like you used to see at the drug store ice cream counter to make a few malted milk shakes.

I did promise myself this would be the last time I tried to do this at someone else's home. Just too much trouble and too many unknowns even with getting everything ready the night before.

We originally had a Plan B, which was to just put a bark on the meat on the grill right quick, but actually cook all the pork in 3 electric roasters we had there. I wish we had gone that route. I can do a full slab of ribs in an electric roaster and they really come out great. Not much fun bbqing in the rain.
Last edited: Jul 8, 2018

I cooked this beef brisquet for the 4th of July. It was off of one of the steers I raised last year. 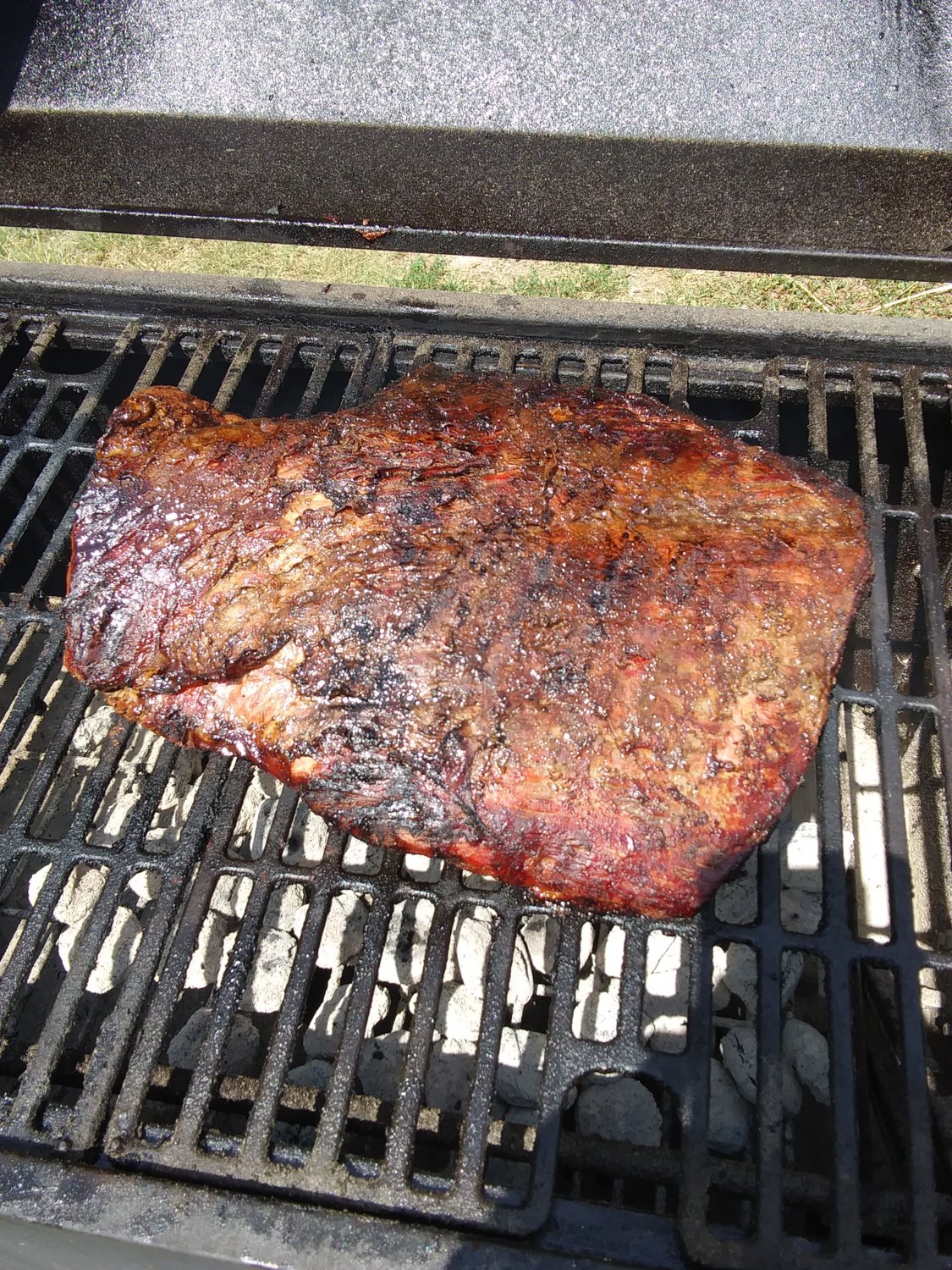 OneFineAcre said:
I cooked this beef brisquet for the 4th of July. It was off of one of the steers I raised last year.

It's definitely my favorite cut to smoke or even slow grill.
(I wish it were still an 'undiscovered' cut of beef...they were lots cheaper before the whole country found out about them. Cheaper than 70/25 burger and way back, most brisket was just ground into burger.)
You must log in or register to reply here.
Share:
Reddit Pinterest Tumblr WhatsApp Email Link