farmerjan said:
Today, we deal with so much more of the "move here with money they made elsewhere, then try to implement things that they used to have" .... frequently from the overflow of those that come to the DC area and then spill out into our more rural areas. And the ones that take a vacation and see the cheaper prices here, then don't like some of the "backward ways" that we do stuff. Or don't like the "live and let live" of the things like, this is my property, if I want to keep 10 junk vehicles for parts, that is none of your concern, even if you don't like the way it looks.....These kind of people may or may not see the cause and effect.... the thing is that they believe that THEY ARE SMARTER and RIGHT and that us "dumb old farmer types ... yeah us Deplorables" just aren't smart enough or SOPHISTICATED enough to do things the "right way". These are the ones that think that their money entitles them to "be the boss" over us that don't know what is good for us.
Click to expand...

Yep. What you said. The same exact situation here. Our state has exploded. There were just slightly more than 1 million population when we moved here, mostly conservative people. Now it's getting to be more of a liberal majority, and they mean to conform us all to what they deem best.

Texas is a multicultural state and always has been. I’m proud of the diversity we have here. Sadly here too the liberals promise something for nothing and tickle the ears of the ignorant. I don’t mean ignorant in a stupid way, but ignorant of history, where we came from and ignorant of other countries that have followed the Pied Piper off into the land of free stuff. Indeed, ignorant of current events going on right now. Take it away from the other guy and GIVE it to me...... we always called that robbery.

We hit 69 degrees today. Time for the temps to tank back to freezing.

Have you had to deal with a lot of snow this year, such as clearing sidewalks, driveways, and such? Poor Miss @thistlebloom had to deal with that recently, and I think Mr. @Bruce has had to do so as well. (We here in Arkansas have yet to have any snow, at least where we reside.)

Yes. There's no way to get around it, and we've got an outrageously long driveway. Sometimes we give the plow man an extra $50 to do our driveway, but that's a lot of hay money so we shovel a lot.

Forgive me, I'm having a doubting moment on Badger. We've been having a long run of the bads from him. What are the chances that a puppy that without constant discipline fights goats off their alfalfa buckets through the fence and tries to turn goats (and people) into his personal chew and aggression toys is going to grow up to be a good lgd and be able to be unsupervised with livestock? I (and only me) have to be in arms reach to majorly discipline him any time he's anywhere near a goat (or my kids or husband). He only really respects me, and only after I discipline him FIRMLY in the last 2 minutes. I'm starting to wonder if his breeder should not have put komondor in the mix. We're really going to have 3 years of this kind of behavior?

He's not even behaving with goats through the fence so I'm not seeing how he's going to calm down and reform and be decent. I'm concerned about the risk he poses to the goats across a fence when he's supposed to be able to at least be WITH them without major concerns. He seems to see them as toys and food.

Wow, this is going to take a lot of study and answer. Why don’t you take this to the LGD section and post it there? I’ll be on my laptop tonight and can post better there than on my phone.

Alright will do. He's acting more like a dog that needs to be a pet IMO. I'm becoming very worried. I've been trying to out consistency him on everything but it doesn't seem to be working. It's like I'm fighting his wiring to chase and beat up stuff. He's great with chickens though...but goats are not chickens (and neither are my kids).

Barn cat rescue brought us some ferals today to help with my rat issue. Two black cats-brothers probably. One looks like it might turn friendly, the other still looks like it wants us to go burn in h311 (he's a little scared kitty). Bailey took a long look during my intro and approved the additions and lost interest. Turns out Badger is terrified of cats. I assumed he had been exposed to cats as a pre-8 week puppy. Looks like he may have been. He's afraid as in, tail between legs, afraid to go in the WHOLE barn, baying while trying to stay away, ready to pee himself afraid. Never seen that reaction in a dog before. I made him come into the stall to intros (to make sure he wasn't going to explode into the stall and try to kill them during the night) and he about died. Nope, he's not going in there under his own power.

The catch is that these are little, undernourished 6 month old cats. They're like, barely not kittens. Badger's greatest fear is kittens. If I drag him too close he starts shaking.

It kind of looks like he might not protect anything against mountain lions or bobcats...or neighbor cats.

I'll be supervising this. I think eventually he's not going to care about them.

On a side note, I didn't repot my violet leaves in time. They're blooming. Bad indoor gardener. Anyone need any extra baby violets? 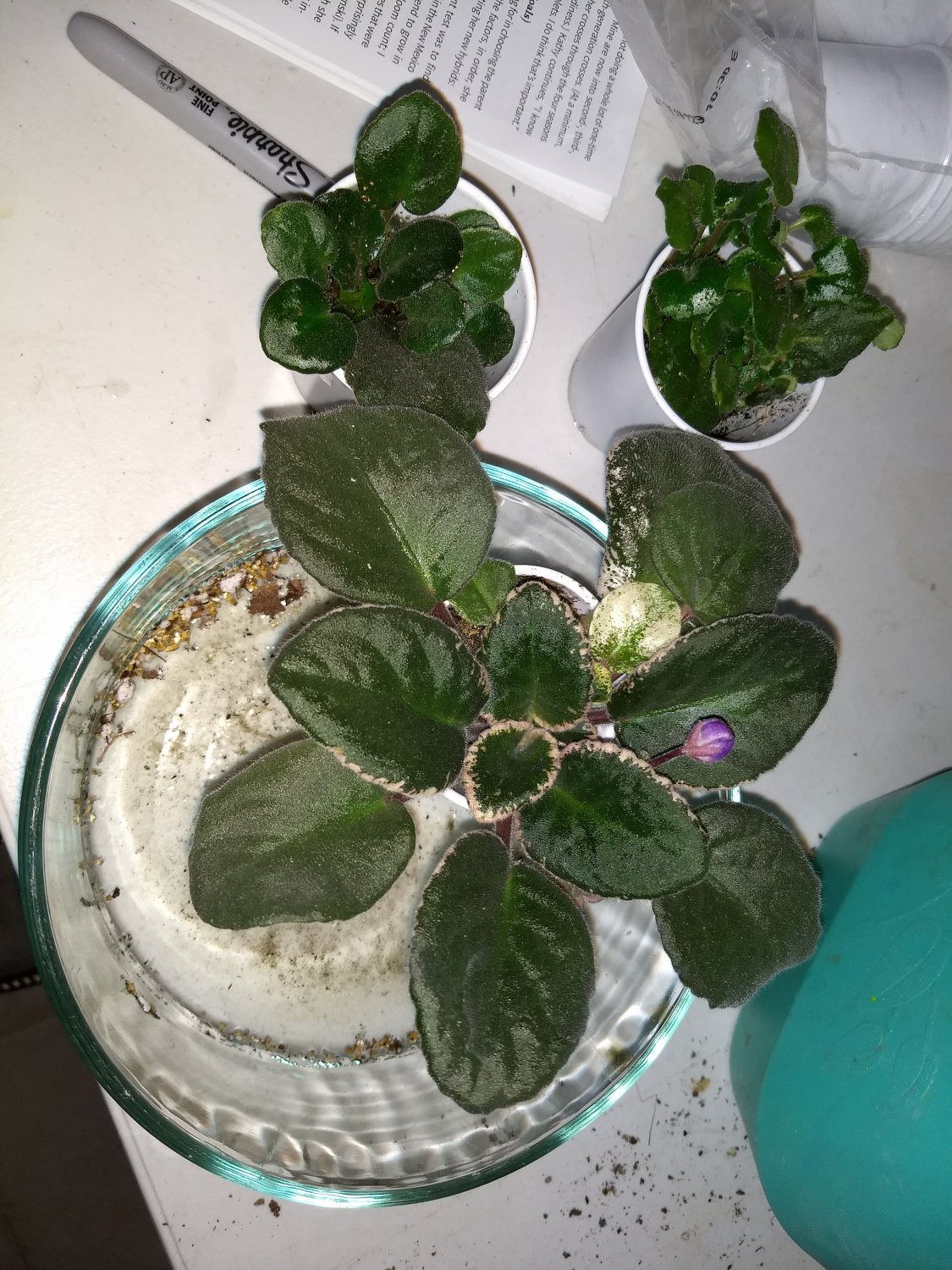