Then I gave the pigs mud, becuase until about 10 they have no shade there. It's not hot, but sun is sun. 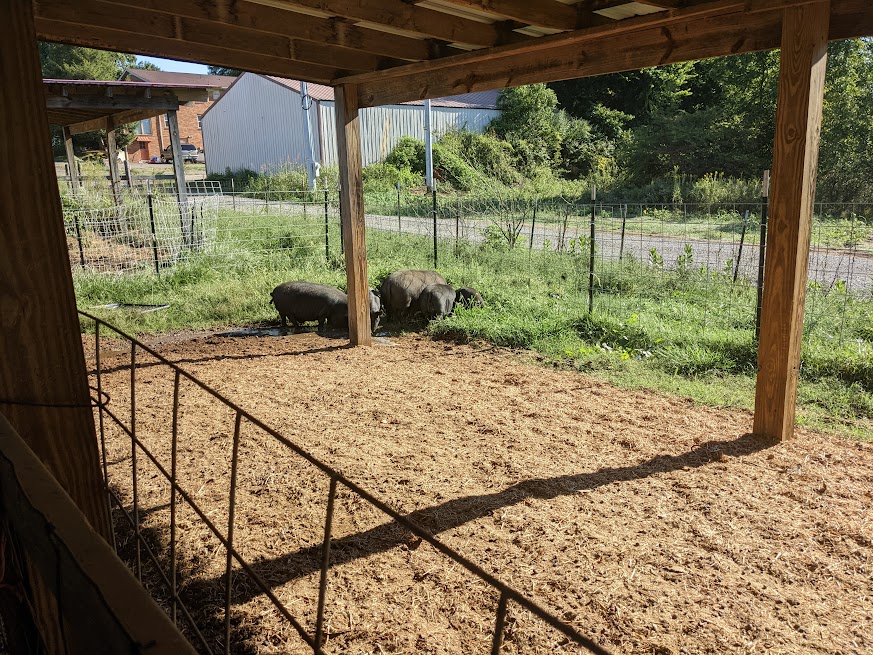 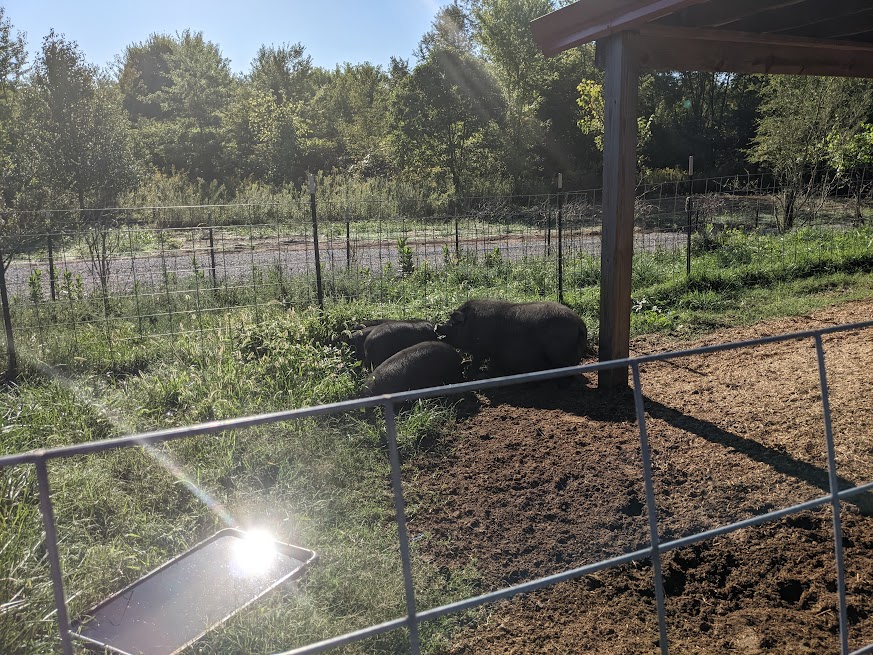 Moral of the story is we will only have our guinea hogs. And new boars will only be used if and only if they have the right attitude and build and look true to breed.

Oh, and the frustrating part of it is after all the tripping and pig scratching and pushing into the pen the city that supplies our water is cutting us off at some point for the day for maintenance. Here you can also see the road and the fence line the goats studiously cleaned off.

The sooner my Not Kune gets dispatched the better as far as I'm concerned.

Isn't DS#1 Danger Dan? Is he not old enough to know better than to wake the house all night? And how does he get to school awake if he's been up since 1 AM??


rachels.haven said:
He still does not like me for some reason. I can't imagine why. He may also not be pure AGH because his face is also long and narrow and his build is longer, taller, and lighter. He will be a dinner pigger. Someday.
Click to expand...

The last part may explain the first

Bruce said:
Isn't DS#1 Danger Dan? Is he not old enough to know better than to wake the house all night? And how does he get to school awake if he's been up since 1 AM??


The last part may explain the first
Click to expand...

Dan is my middle child. Aiden is my number 1 and he has been the most challenging one to date STILL. He's probably going to wind up on sleeping meds to get through this and possibly anti anxiety meds for the next month or two until he can get through this phase. He is extremely bright, extremely determined in whatever he does, and has an iron will. If he can't understand and/or feel like everything is under control he has issues and always has. He's going to be a force to be reckoned when older with provided get him to adulthood (and provided he doesn't become a disney super villain).

Baby Shaun is technically inclined like Dan and me. Neither Dan nor Shaun share Aiden's extremes. I do worry about the emotional toll on Dan having to deal with Aiden though. Shaun too as he becomes more aware of our somewhat lopsided family dynamics right now.

My husband is like a very, very mellow and low key version of Aiden. Aiden gets just the intensity from me. I did not have anxiety or insomnia as a kid, but I had intensity to spare. It's a rough combination he's inherited.

Pig adventures! That boar will be tasty. Keep him away from the girls so no hormones are getting him stirred up, and take him to slaughter. Animals with bad attitudes don’t last long here!

Baymule said:
Pig adventures! That boar will be tasty. Keep him away from the girls so no hormones are getting him stirred up, and take him to slaughter. Animals with bad attitudes don’t last long here!
Click to expand...

We are going to do him tomorrow. Not ideal, but he's looking and acting too much like a wild boar to want to keep around.

Bailey is not pig safe and it looks like I won't be free ranging my guinea hogs for snake patrol. She is food aggressive and when she sees them rooting she thinks the pigs are eating some exquisite treasure she doesn't have so she starts lunging, snarling, and barking and trying to go through the guinea hog pen to get it and pull pieces out and she eats it! (they are doing through fallen hay compost in their pen). The guinea hogs don't speak dog, so when she does that they all gather around and grunt excitedly at her and try to touch her with their noses...I think we're going to need to put them back behind an electric fence. We have a language gap. (Riker doesn't care about pigs except that he wants them in the pen and he gets very concerned if they get upset which sounds like it might get scary if Bailey gets her way with the pigs.

I gave that a like because I’ve had some wacko dog personalities. Darn good dogs, just wacko. The wacko part makes you appreciate the other part that isn’t wacko, even more.

Baymule said:
I gave that a like because I’ve had some wacko dog personalities. Darn good dogs, just wacko. The wacko part makes you appreciate the other part that isn’t wacko, even more.
Click to expand...

I'm beginning to think wacko just goes with the LGD territory. They've got a lot of instincts but they are always thinking and it clashes and sometimes makes a crazy mess.

Bailey is a super great guardian. Just a little quirky about pigs.

I miss my psycho @itch Paris. 13 years of screwball dog sure left a hole in my heart. 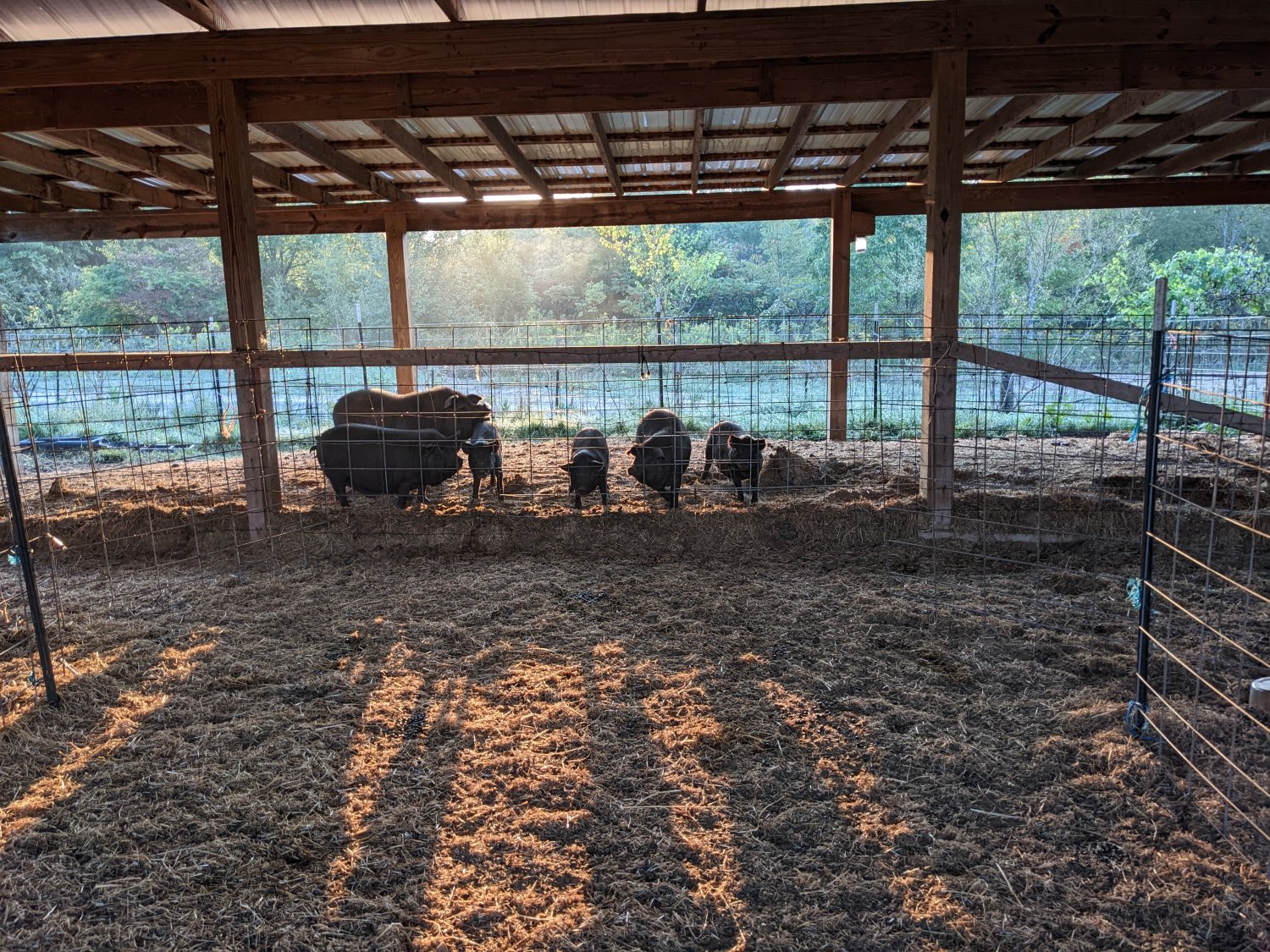 This weekend the rest of the winter hay came in. I think we're ready.
(I also earned myself a wasp sting from the sleepy southern wasps we have here when I turned up a pallet they were trying to make a new nest under. I'm allergic to wasps so random hives and swelling until the body deals with the venom and damage...oh well, at least it's not anaphylaxis shock )

We also processed Mr. Not Kune. He was Soo not a Kune.
I brought out food to get him to the fence for shooting, but we didn't need it. He came over charging, ready to fight, so my dad shot him in the eye with his brand new shot gun(I don't remember the gauge or ammo used but I will probably be target practicing on it at some point so I will be reminded). Then I turned off the fence and dad and I went in and sliced him to bleed out (pig skin and hair is TOUGH, as is the boar shield). Then we each grabbed a rear leg to drag him out of the pen and pasture, which was where we ran into a problem. He would not move. Turns out he was not 150 lbs. At 7-8 months of age on a pound and a half of feed per day he had grown to some weight in excess of 200. Not very Kune. So we used the small hock hanging hooks I found in the barn and we built a yoke so we could pull him a little more efficiently and we slowly pulled him out of the pen. Then we had to get him hung on the rack we built...for a pig half his weight. So i got the extra pulley from my hay loft pulley project in Groton that came in a pack of two and we grabbed DH, Mark off his plumbing project and between the three of us with a lot of straining we got him hung up there. (Darn, the rack is still up, I should have gotten a pic of that for the post). With a fan blowing on us we skinned and skinned and skinned, and removed the head and eventually gutted (nerve wracking after the size and all that skinning effort). Then we had to cut up the carcass to bring it and all our things in for butchering and packing and chilling. (I saved fat and lief lard)
After exhausted Dad left we cooked a piece to try. I think it's boar taint free. Either that or there's only a very, very little stink bug smell.
So in new freezer locker #2 we have the meat all packed and ready to be split between the parents house and ours if he approves of it.
Pasole for dinner tonight. Pictured above are the surviving guinea hogs. The next dinner pig is the one right next to the ones side facing you and he is growing much slower, and much more normal. He may be a late winter pig.

I'd better start the pressure cooker making the pork broth.

And lest you think I outlasted my dad, I woke up in the night needing lots of motrin due to hours on the knife skinning that hog and swelling in the leg. Dad says he also hit the pain killers last night but is feeling great this morning. I think I'm doing okay too.

Mr. Not Kune was bigger than mom hog. I can't believe we did that. But nobody got hurt and the boar did not escape and hurt anyone or anything on a rampage. I think we will stick to breeding our own hogs from now on so I can know what they actually are. Registered hogs might also be an idea (although papers can be falsified no problem as the Nigerian Dwarf breeders have taught us).
You must log in or register to reply here.
Share:
Reddit Pinterest Tumblr WhatsApp Email Share Link