HomeOnTheRange said:
And if they pop one in their mouth, not a bad snack!

Sooo yeah... When my own kids were about 3-4-5 ish, mom was visiting us for a few days and we were cooking, kids were playing, all normal stuff. DS1 comes into the kitchen, shows us a couple pieces of cat kibble and says something along the lines of 'hmmm crunchy... not bad' and then walks out, taste testing another one, clearly satisfied with his choice of snacks. Mom was aghast that I didn't stop him, take the cat food away or whatever. I just laughed at my kid and said something along the lines of 'well I feed a premium cat food, so the quality is top notch, and besides, every bite of that cat food is fortified with more vitamins than our natural foods, grown here in America in our severely deficient soils and I'm quite positive that the whole meal we are making for them right now isn't going to have nearly as complete a variety of vitamins anyways. And besides, I doubt it actually tastes good enough for him to eat too many more pieces'. She didn't know how to respond.... but a week later she sent me a book and some info asking if I had ever heard of a Dr that said a line almost exactly like the one I did about the pet foods being more nutritionally complete than foods intended for people... Great minds think alike I tell ya!
F

On the note of the cat food being more nutritious, saw an article about how all these fanatical nut people are into all this new "fake meat stuff" , and if you read the actual ingredient list it would scare a saint, yet they are the ones that tout feeding all this HIGH PRICED, NATURAL, WILD dog and cat food to their "precious animals". Somehow, it seems rather sad that they believe that their animals need all this "back to nature" food for their animals and they think that it is healthy to put all this totally UN-natural food into their own bodies.....

farmerjan said:
Somehow, it seems rather sad that they believe that their animals need all this "back to nature" food for their animals and they think that it is healthy to put all this totally UN-natural food into their own bodies.....
Click to expand...

I'm all for the idiots eating all the chemical crap they can stuff in their bellies. Their cats and dogs will outlive them.....BWA-HA-HA-HA!!!

Brother N and family came to visit and seemed to enjoy themselves. They have only stopped by once or twice before I believe, so its been awhile. This is really the first time I have had a chance to interact with this nephew more than just a few minutes. He seemed to warm up to me just fine... but couldn't remember my name, so he just kept saying "excuse me, excuse me" … at least it was polite! He enjoyed feeding the animals... and it looked like his mom really enjoyed it too!

Mom and dad stayed for breakfast today so I made biscuits, mom made gravy. YUM!

And then I made one of my german cakes. Everything was really good. Mom had brought me some of her homemade bacon yesterday. She buys the pork belly and marinates it herself, seasons it, then smokes it. I was fantastic. Apparently she has her brothers hooked on homemade bacon too. BLTs with home made bacon and home grown tomatoes are to die for!

Since they left early to get home, I went to the next town over to pick up my new glasses. I also stopped in for cat food and did a little window shopping, got myself a Starbucks, picked up a few new measuring cups, mine seem to be disappearing...

And then I got a call from Alaska... we were talking on Skype when I got a knock at the door... He had sent me an edible arrangement for my birthday! It had chocolate monkeys!

I tried to put it in the fridge so I could run out to feed, but it didn't fit... so I threw dinner to my outdoor kids (I mean the animals here, if anyone was confused) and then went next-door to share a little with the neighbors. They had never had one and appreciated the sharing and how delicious it was! Fun food and good company. I did put some in the fridge for my human kid too, there is so much to share! 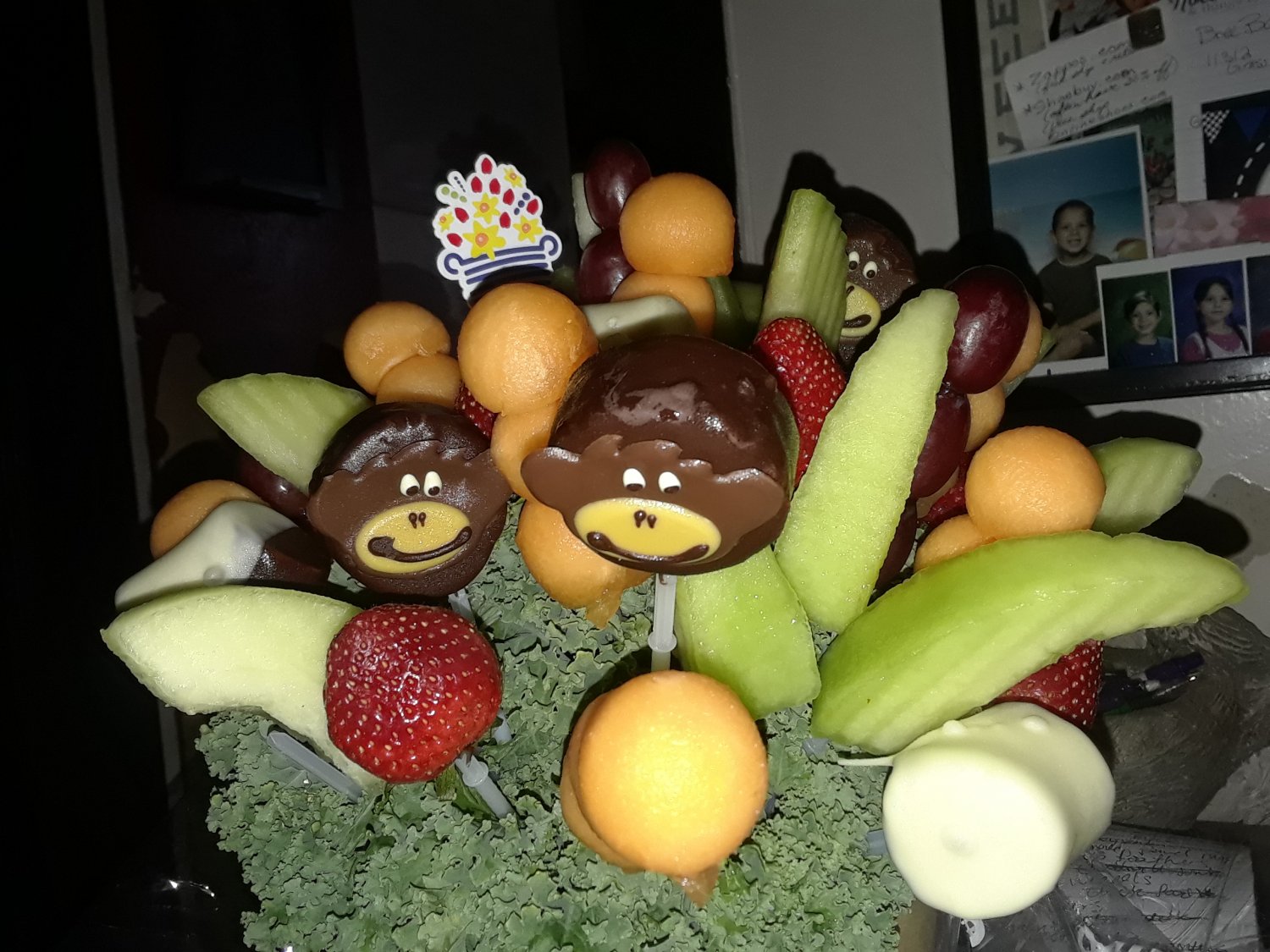 So far it has been a really nice birthday weekend!

That is a nice surprise Birthday gift! It's nice that you had such a good weekend.

Happy Birthday RDCL!!!!!
And don't forget to "open" your goat present now that your birthday has actually arrived.

I brought one of the german cakes to share with coworkers for breakfast and we had a taco bar for lunch. One coworker said she didn't know if it was my birthday or hers, as she was enjoying the cake so much, she felt like it might have been hers. I came home to my kid wishing me a happy birthday and saying that everyone was fed already. So we went to town, picked up an ice cream cake and invited ourselves to share some birthday dessert with the neighbors. I had several messages from family and friends and an e-card with a singing goat from Alaskas mom! The neighbors got a kick out of that one with me, we played it several times!

Here is the video without the greeting card info (it had emails and names, so to keep things private I'm just sharing the video)


And I already opened my goatie birthday present... I've been loving on him every day.

He is getting calmer and more comfortable every time we interact. In messages today, Uncle said he was so happy that I take grandma on my adventures, she loves them and has so much fun. She was telling him all about our last adventure and he is thrilled that she can enjoy those trips with me.

Coworker had her baby yesterday at 5:59 pm .... just 6 hours and 2 minutes more and I would have won! I had put my bet on the 30th of course, but I said that if I won, it would only be fair that I got to keep the baby since she would be my birthday present…