I feel this post so much! Sometimes I think all I do with farming is constantly wonder who to keep and who to get! The struggle is real 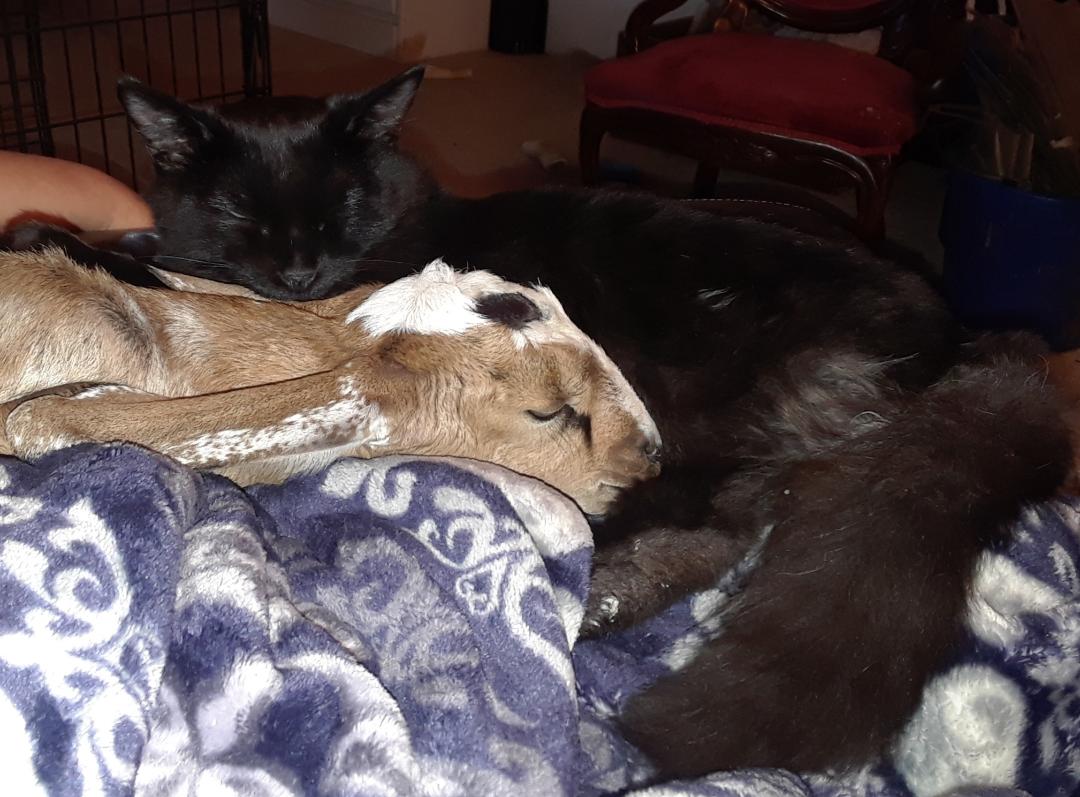 Mirage and his friend, 3 legged kitten, Plank, snuggling on my lap after a midday bottle

Mirage AKA Mr Miragi passed away this morning. He had been happy, eating well and getting around fine. I thought we had turned the corner and were getting better. Then, this morning, he went downhill so fast. He collapsed before I get ahold of an open vet and he was unable to breathe well. We got alot of fluid out of his lungs several times, but he was still struggling and passed in my arms. I feel so lost. Devastated. I cant really wrap my mind around losing him. I know I did everything I could as soon as i realized there was an issue but still. I had a rough overall week as I was regularly getting up in the middle of the night to check on him and make sure he was Ok. Just yesterday, he was walking around, trying to play on the stumps when we visited the kids in the yard, napping on my lap after every bottle, eating well and seemed very content.

OtterPop has been trying to snuggle on top of me, purring really loudly, right in my face. I am sure he felt that I needed the cuddles.

Sad day on the farm.

I am so sorry for your loss, loosing a beautiful baby like that is heartbreaking...big hugs to you for giving him a lifetime of love and care

That's a damn shame. I'm sorry for your loss.
F

Sorry for your loss. I have talked to several farmers and it seems that this year there have just been alot of difficulties.

I’m so sorry for your loss

Awww..... I am so sorry for the loss of your beautiful baby.

That is very sad RDCL but you went above and beyond, did everything you could and more than most could muster

Thank you everyone for the condolences. I was so excited about his future in my herd, he was going to be a huge player once he was big enough. The breeder asked if I might be interested in another buck, either from another breeding this year or possibly from another out of the same dam next year. I am inclined to wait, but I wouldnt object to considering another if one catches my eye, once they are born. I am just too overwhelmed right now to really examine pedigrees and pics of predecessors even though most of the animals they have do have very nice backgrounds.

We had a final delivery this morning, last boer doe to kid. She gave me a run for my money! She has been groaning for weeks, cant breath from the pressure of her belly. She had trips last year so I was expecting 3. She was clearly in labor, but contractions were strong and she would push some with no sign of progress for about an hour. We finally seemed to have progress, buuuuuttttt...... she had 2 bubbles trying to come out at the same time that appeared to be from 2 different kids. I shoved the top bubble back in and tried to figure out what was going on. I felt something, thought it was the pin bones of a rump but didnt feel the spine. I kept saying " I cant tell what this body part is, I cant tell what this is".... LOL, it was a massive front foot! Found a head to go with 2 huge front feet and got kid 1 out. Second kid gave me one foot and a head, so he came out that way. Overall, these were some of the most difficult deliveries, I pulled so, so hard to get them out. 2 more boys. Sigh. But at least they are healthy and pretty. One is a heavy duty little black kid with a little white, one looks like he rolled in a bunch of melted crayons. My kid was helping me say 'I dont need another buck, I dont need another buck....' but he looks like he might be trying to give HippoDonkaDonk a run for his spot in the buck pen!
You must log in or register to reply here.
Share:
Reddit Pinterest Tumblr WhatsApp Email Share Link