Is that Dexter or Marshall? I think he's quite masculinely handsome. I can see ewes swooning for him.

The Damascus goats are just a bit extreme, (and a few of the images I pulled up were rather alarming), but the ones that just looked like Jimmy Durante Nubians with ears on steroids I kinda liked!

thistlebloom said:
Is that Dexter or Marshall?
Click to expand...

Dexter is the Beulah in the post above yours and Marshall is the Blue Faced Leicester in the earlier pic. with the pics. of ewes with lambs.

That picture of Dexter was taken a bit back and he has now grown a 'bib' of long hair from his neck to his chest.....happens in the breeding season, and he has put on some pounds. So, not only is he 'beefier', he is wearing his tuxedo for the ladies. The girls do love him.....he had little circles of ewes around him every morning when he first went in to 'see' them. The girls are a bit fickle, though. The next morning, they didn't even want to know him

Nubians look so silly when they are trotting along with their huge ears dancing. There's a lovely YouTube video of two goats trotting side by side set to various bits of music, including 'Stayin' Alive' by the BeeGees....very funny.

Pretty lamb, BAY, so glad you have another keeper ewe. I really love the colors on your Katahdins. The colors could lure me from my White Dorpers possibly, but I love the amount of meat on the WDs I have. Yum Yum!

Katahdins seem much more prevalent in the eastern half of the states. Fewer of them out here in the west, whereas we have a lot of Dorpers. Maybe Dorpers are better in drier areas while Katahdins do better in wetter areas? Parasite resistance and foot rot resistance in Katahdins vs heat and drought resistance in Dorpers? Katahdins were developed in the northeastern US, while Dorpers originated in South Africa. Big difference in climate and forage type. They say Dorpers can survive on sand and rocks - that is the type of landscape for which they were developed. However, Bay has reported Dorper problems with foot rot and parasites in wetter east Texas, while her Katahdin hooves seem to hold up better.

Ewenique is due anytime between now and whenever. Ewe code applies. She is waddling huge. Look closely on her left side, baby bump, one of her lambs is stretching. She comes to me for belly rubs, I can see her relax and sigh.... aahhhh....... LOL 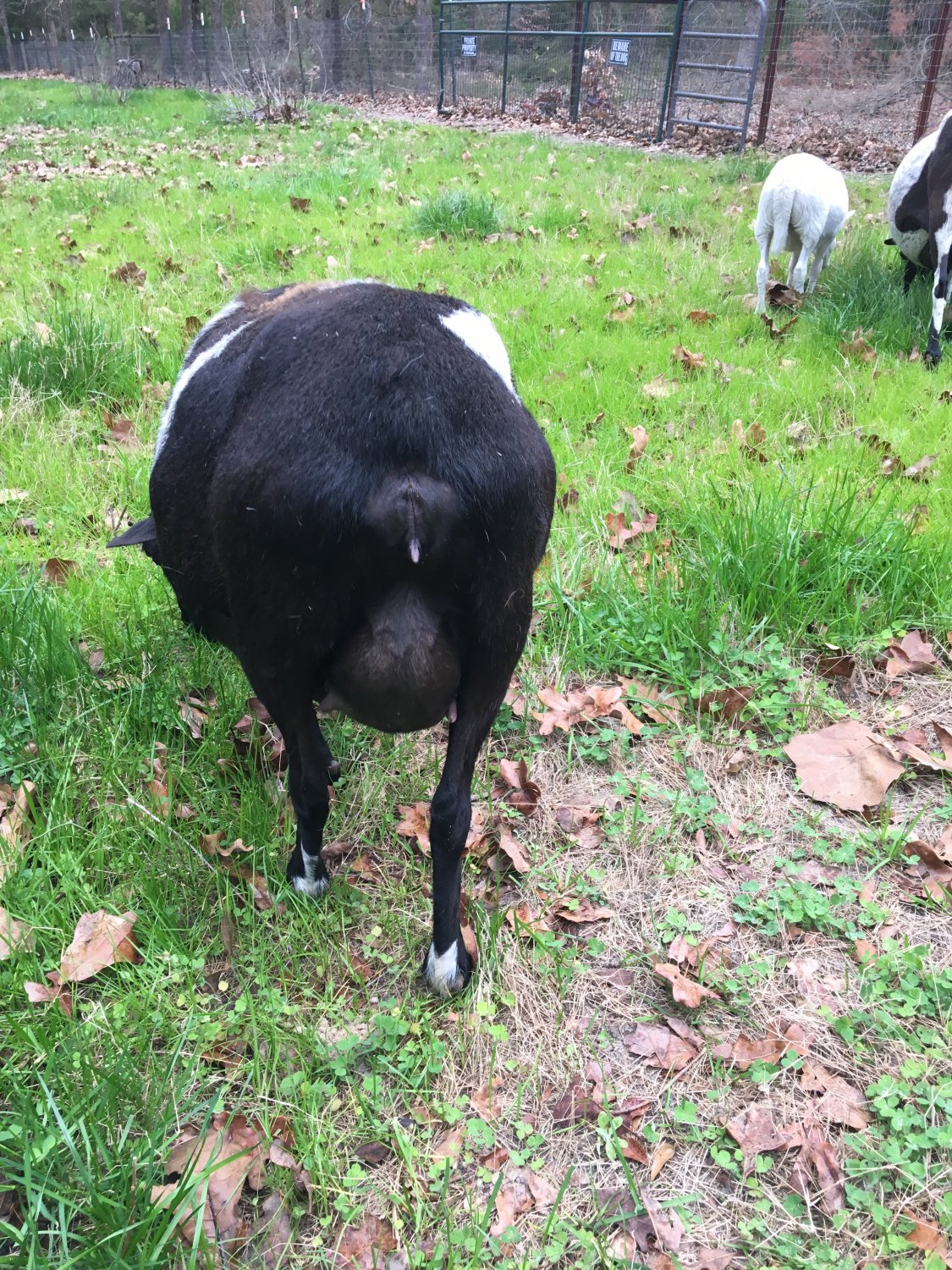 Full udder, her ligs are soft and a storm is coming tomorrow night with up to 80 mph winds, 3” of rain and tornadoes. Sounds like twins on the way to me! 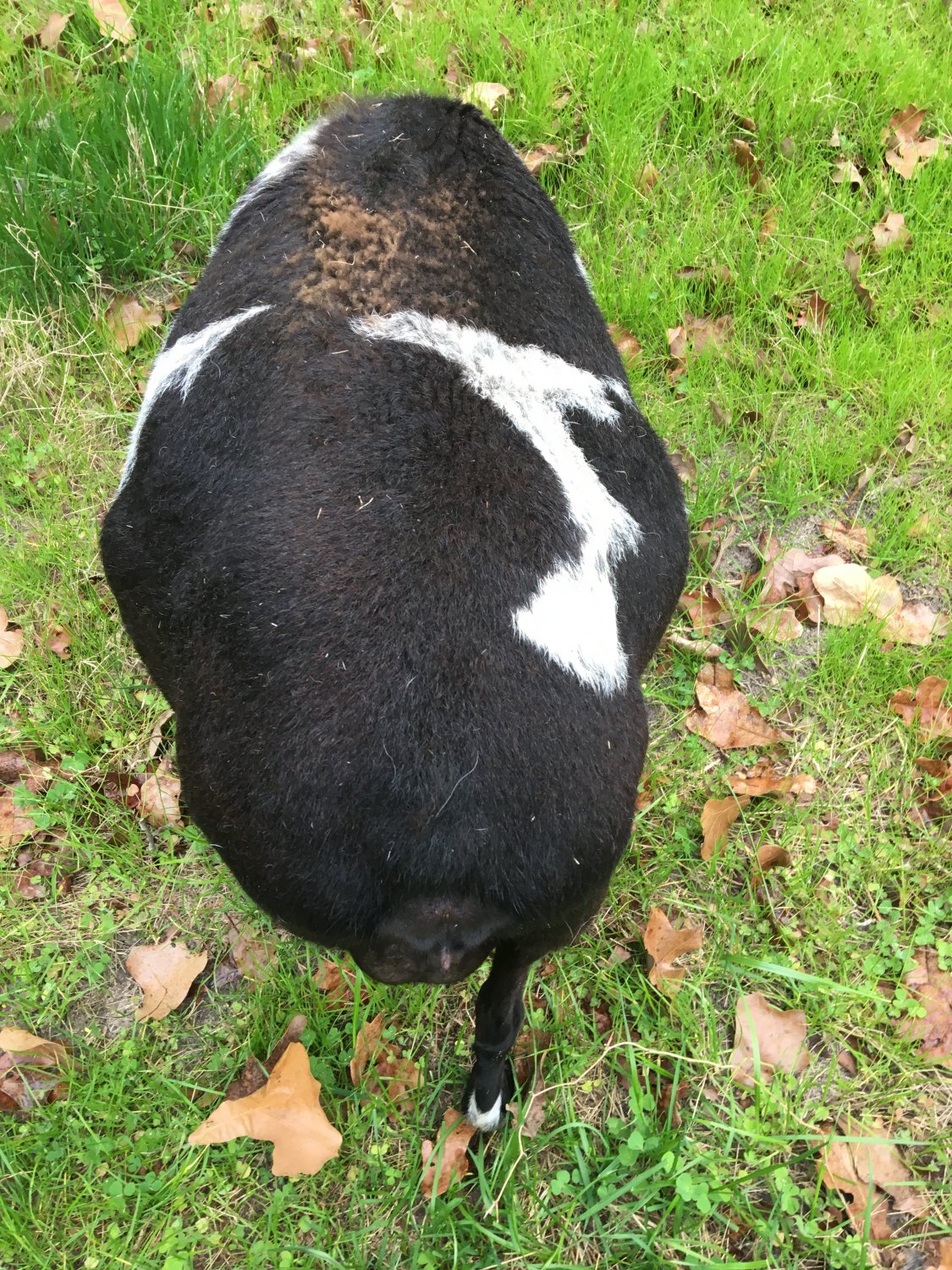 I always post pictures of Miranda Lambert when she is in ewe code. She gets huge, her udder looks like a cow udder and goaties oooh and aahhh over her bulging udder. So this is a picture of Miranda NOT pregnant. She has a big belly anyway. I call it a good spring of the ribs—lots of room for babies. 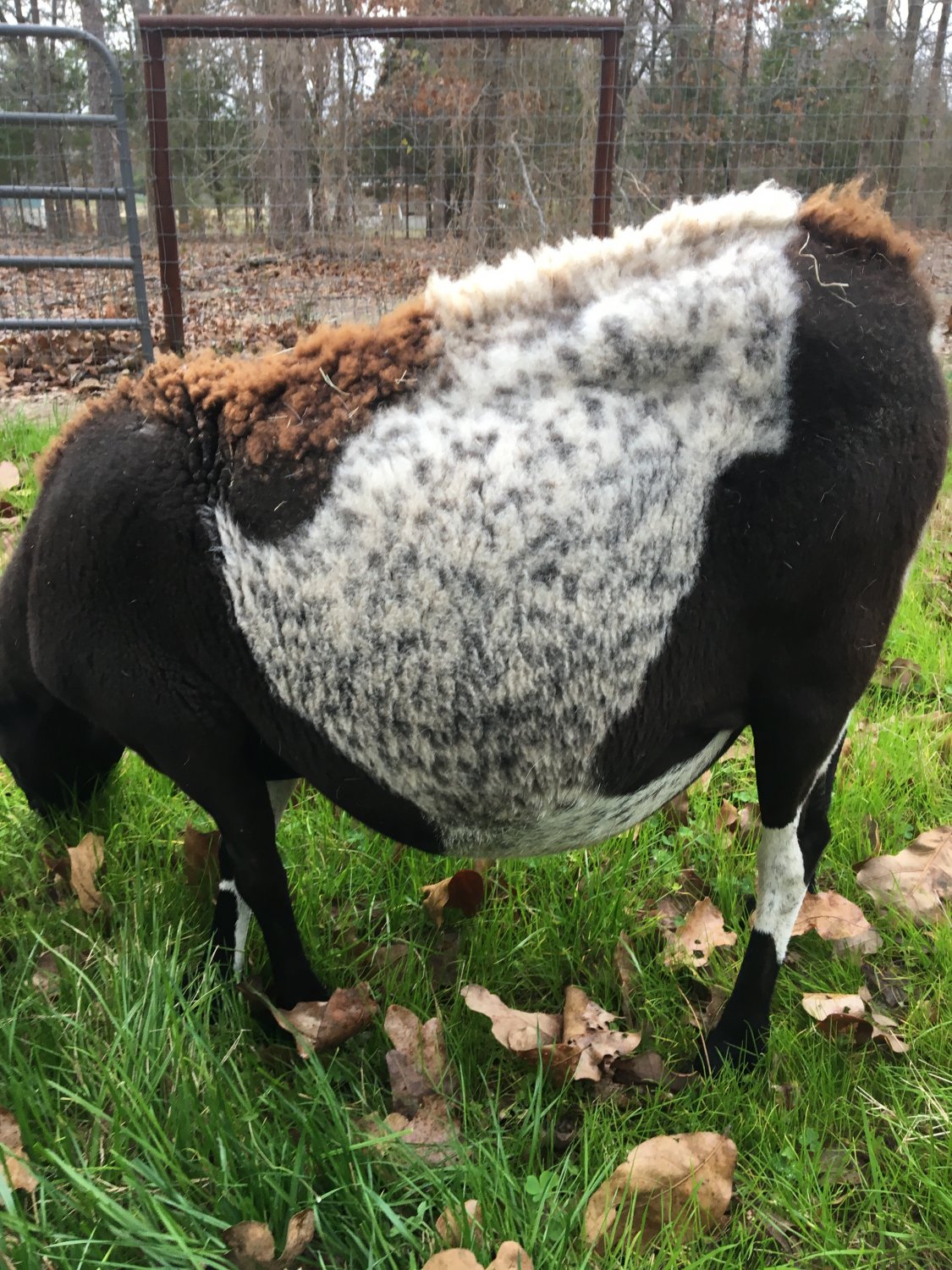 She is currently nursing 3 month old twins and still has a big udder. 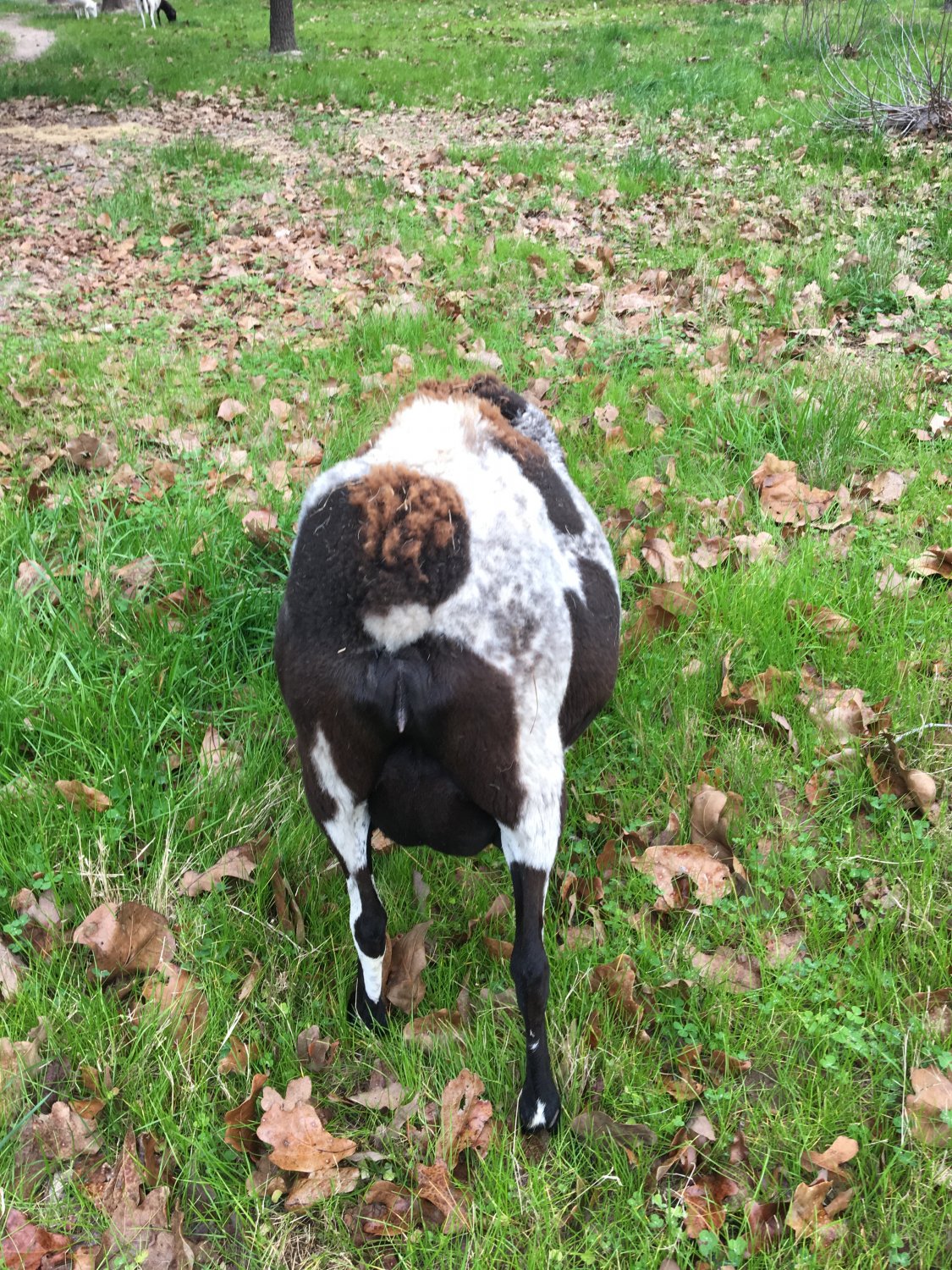 I love my girls!

I can see why you love your girls

.....be safe during your storm my twisted sister

Ewenique had a single lamb early this morning. A ram lamb, I really wanted a ewe lamb! 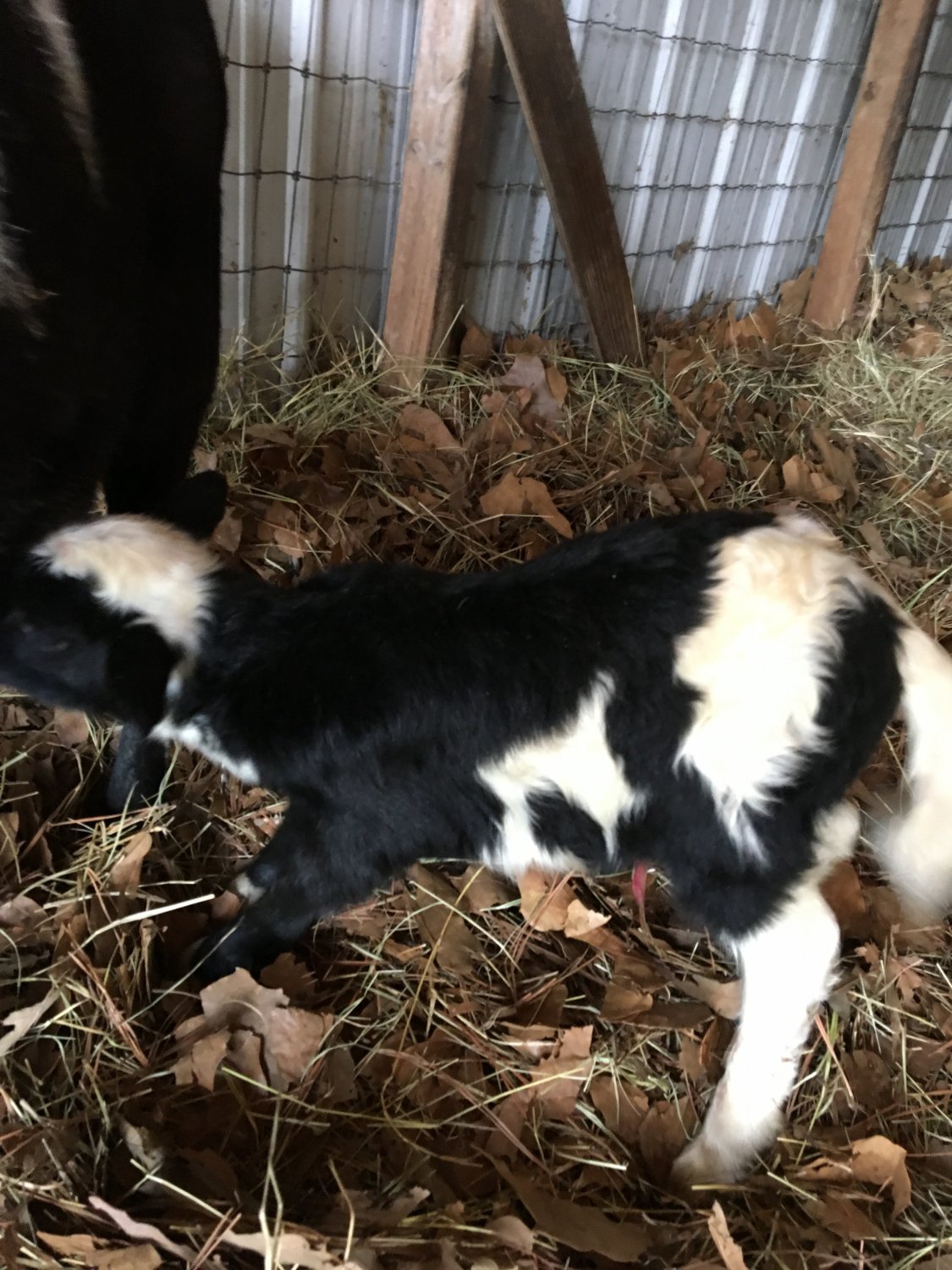 He's colorful! I like him. Sorry Ewenique and Ringo ignored you. Maybe you need to get that order in earlier.

Ewenique almost always has boys! I have only one daughter from her!
F

Maybe she is expecting you to keep a ram lamb for a herd sire so she is trying to produce one that you just can't make into a meal???
You must log in or register to reply here.
Share:
Reddit Pinterest Tumblr WhatsApp Email Share Link