I’m not really doing anything right now anyway. Too hot. Haven’t done a single thing on my list lol
Did do baby shopping yesterday though

And Consort hatched out all her eggs but two. 8 chicks and 3 poults.
Not bad for a first timer! I’m proud of her 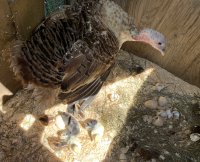 Senile_Texas_Aggie said:
Actually he has a quick attach bucket.
Click to expand...

Well sure enough he does! No reason at all to buy clamp on forks then.


Senile_Texas_Aggie said:
Have you considered doing the wood in the winter instead of the spring and summer?
Click to expand...

I don't dare take the tractor up and down the hills in snow so winter is kind of out. Not sure I'd be brave enough even with chains. I cut in the fall and the trail was still a mucky mess, as it was in March even though it was still below freezing. Given the lack of rain so far this year I bet it is dry up there now.


SA Farm said:
Did do baby shopping yesterday though

Did you find one you liked or are you still looking?

Bruce said:
Did you find one you liked or are you still looking?
Click to expand...

Consort managed to hatch out a late bloomer poult. Hopefully it makes it as it seems a little weak. Time will tell. I still have to get Princess set up with the eggs in the incubator that are due next week, but we’ve been battling a rat problem in the barn and I’m not sure they’d be safe enough even with a fierce mama turkey watching after them...might have to figure out a way to set her up in the brooder shed. 7 poults from there are expected to go to their new home tomorrow, so I might be able to rearrange it

The mamas with their poults can go back into the barn when their littles aren’t so little.
Nutmeg decided to go broody on me after all, so I have to rig her up someplace too. Fortunately I have chick and poult eggs in the bator, so she’ll even get to hatch her own kind - though none of the eggs are hers lol
Finally got my garden planted entirely. It’s supposed to rain and possibly storm tomorrow, so I’m glad that’s done. Our earlier plants are doing well. Tomatoes are blooming and so is a little hot pepper plant DH was gifted. 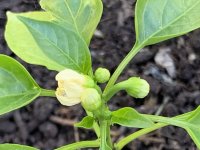 And...drumroll please...I finally got the flying leap pic I’ve been hoping for! 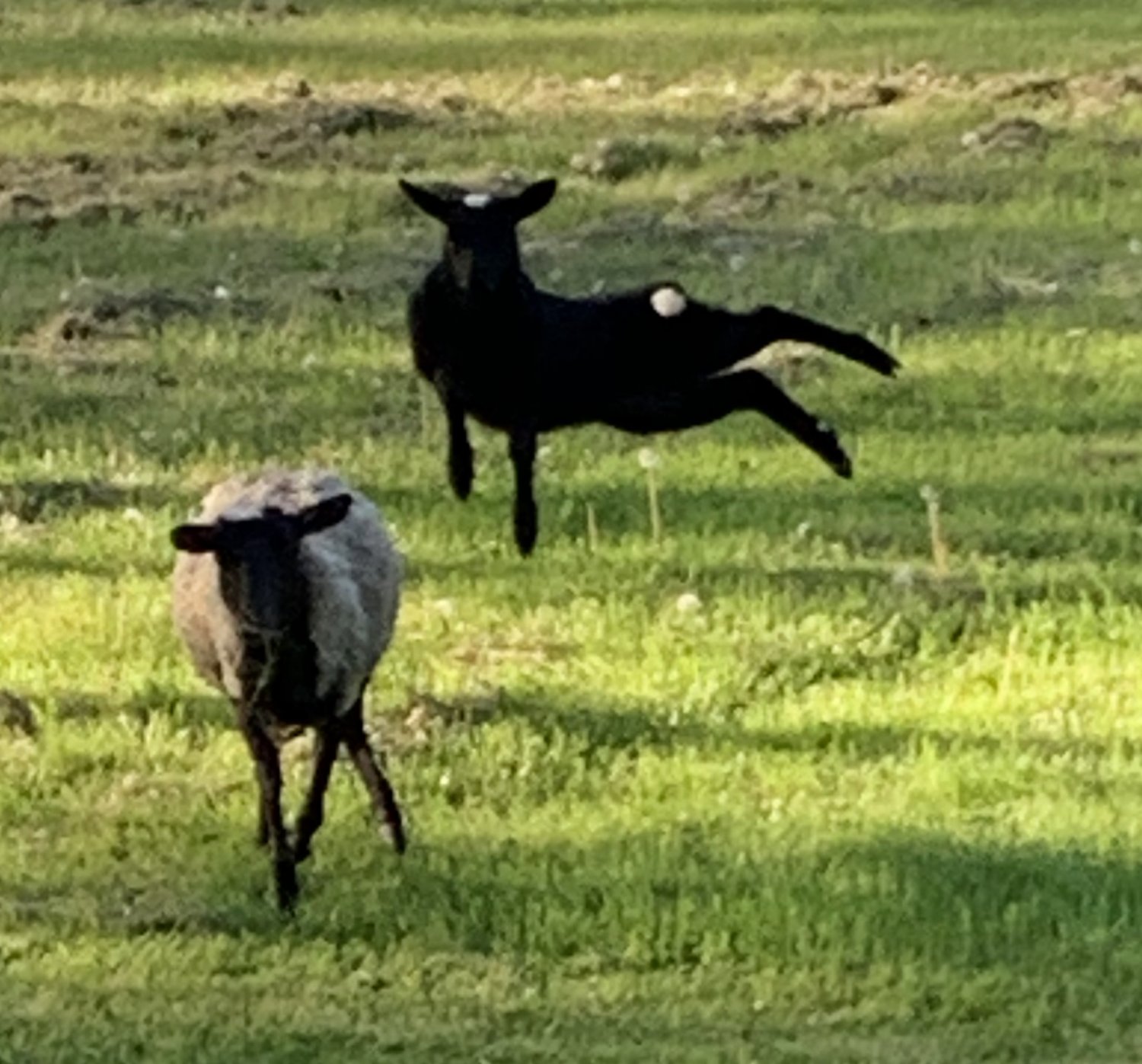 Great picture! That's the joy of life right there.

If ya want to catch more like that....ya can take a short video and clip a frame out of it....

I said goodbye to three of my turkey hens yesterday. I find I have far too much interest in producing varieties that would require me to keep more and more turkeys if I have the option, so I decided it was best to remove temptation.
I kept Princess and Consort, my two broody ladies. I’m really only going to miss Missy as she was my tamest girl and the new Sweetgrass girls I’ll be replacing her with won’t be as tame. (But she was the one that was the worst for being able to produce many new and exciting turkey varieties lol)
I also found a home for Sage (BLRW), as she also doesn’t fit into my breeding plans. Nutmeg (GLW) is on the block too, but not until she’s done with the eggs she’s currently brooding. Chick (DH’s EE hen) and Pepper (SL Cochin) are the only hens we’ll be keeping from last year.
I’ve been cutting back on our grow outs as well as we decided not to raise the BCMs after all. DH wanted them, so he got to keep a single pullet. I have 3 or 4 SS pullets to go with Spice (SS roo) and a trio of blue Cochins who will be put with Pepper in their own housing when they’re old enough. Probably in the barn where the geese were since that pen isn’t covered and Cochins aren’t fliers. (I was going to part with them too, but couldn’t talk myself into it. I will if I have to, but for now they’re planned keepers.)
I think that’s pretty good. I’ll have 2 small breeding groups of chickens, 1 of turkeys, and the sheep. A far cry from my usual plethora of animals and hopefully very manageable. 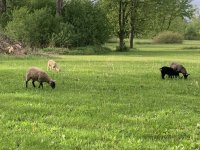 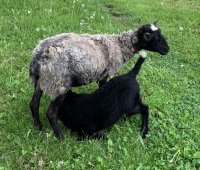 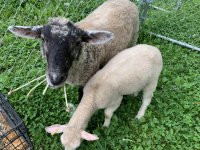 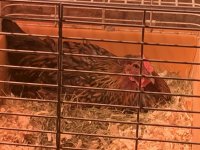 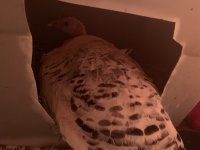 Kit is getting big! Love the white spot on her tail, like a flag,

On Monday I had a buyer for some chicks, so DH and I had to go out and steal them from Consort. It did not go well. She escaped and we only managed to snag a few of the chicks as they were escaping like mad

Amazing how they fit through the most narrow of gaps to join their frantic mom.
By the time we’d wrangled what we could of the chicks, we were already running late to meet the client, so we took what we had and crossed our fingers that Consort wouldn’t go far. She was raised here, so makes sense that she’d stick around, right?
Not so much.
We went hunting for her when we got home and found nothing. Next morning still nothing. Later that day DH thought he heard her about 100’ back in the brush, so we went searching. Several thousand (huge exaggeration, but didn’t feel like it) mosquito bites later, we hadn’t seen or heard a thing, so we figured she and her littles have gone back to the wild. Sad, but at least she’s heritage, so she has a good chance at survival. I crossed my fingers she’d show up again, but wasn’t going to count on it.
Today she showed up around 7pm, so DH and I went out and managed to catch her and throw her in with King. Her littles made their way in with her and now, hopefully, all will be well. Phew! Only another batch of mosquito bites and four ticks later

In other news, Nutmeg and Princess are busy hatching out their littles due tomorrow. Princess has two for sure so far and Nutmeg has four. 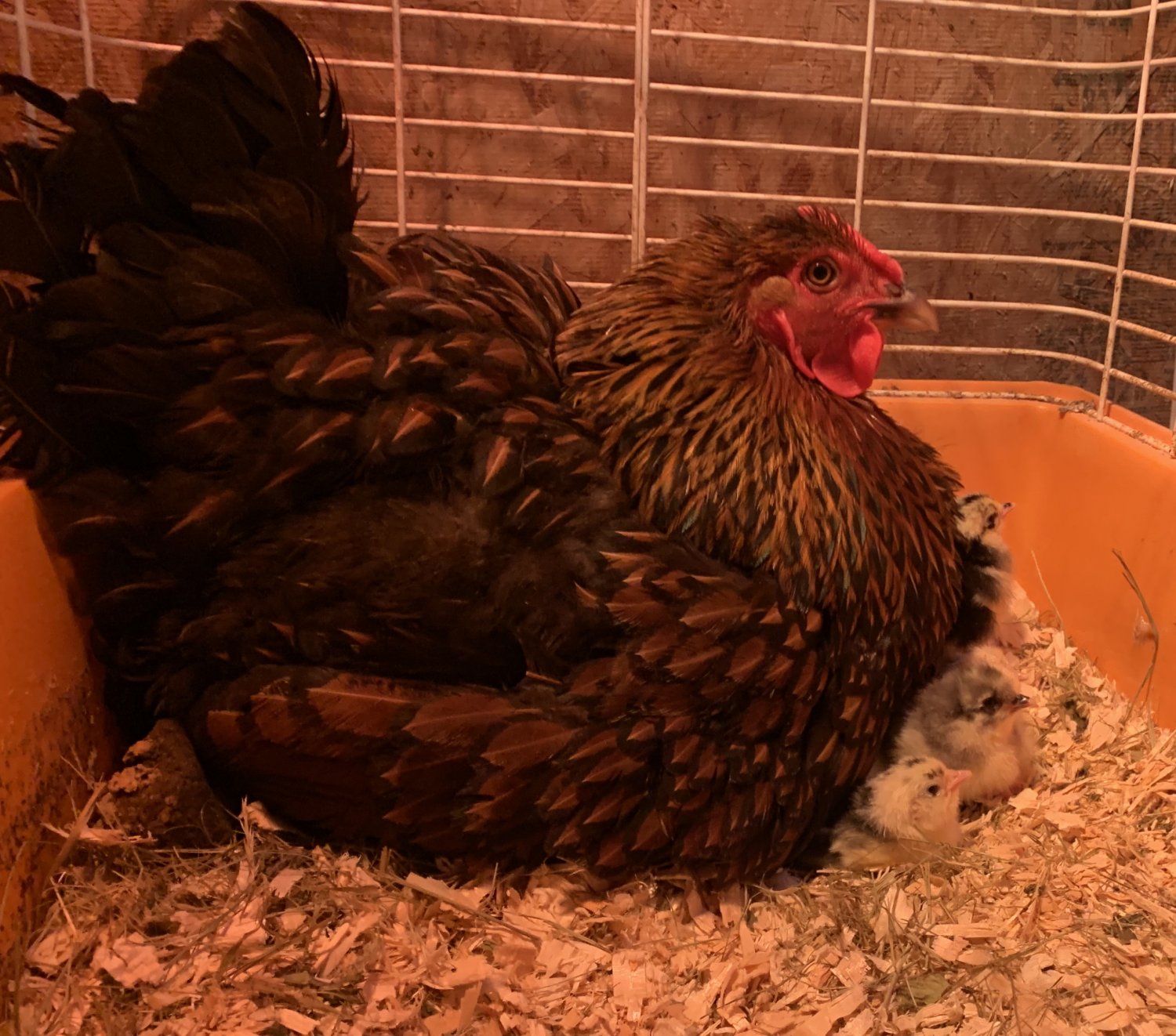