Mini Horses said:
I say "lovelies". Is that a bred?

Twinnie has a Shepard look....nice girl! Not crowding in that pic. I like it!!
Click to expand...

Lovelies - That's it! Starting a new breed, will charge mega $$

Twinnie definitely has the shepherd / Malinois look. She's 10 months -- and her real coat with the curls probably won't show up for another year. She definitely does not work like a shepherd or a Mal - thank goodness!! She's pretty sensible and yup works nice and comfortably wide - yay!!

Monday Monday Monday -
Busy morning. A previous nosework student came out (she moved away a couple years ago) and we worked her sweet German Shepherd (possibly a mix) on the sheep. They both did great. It was good to see her again and catch up.
And because as we all know everything always happens at the same time, my training buddy who I originally bought sheep with over 10 years ago came by to drop his sheep and also take some to the sale barn. I said good bye to old 22. It was the right move. He left 3 with me - a Barb, and possibly 2 Katahdins or crosses. Sorting was interesting - well, actually fun (I actually LIKE that sort of thing - no pun intended but hey hay ).Of course Obi Wan was a great help. I am so blest to have him.
Also got a vet contact for when I need it but plan to get things started with an overall wellness check so if I NEED help we'll at least have a working relationship started.
Yesterday I put all the sheep together in the pasture - all is well, and today of course it's a different mix with this mornings sheep-shuffle. 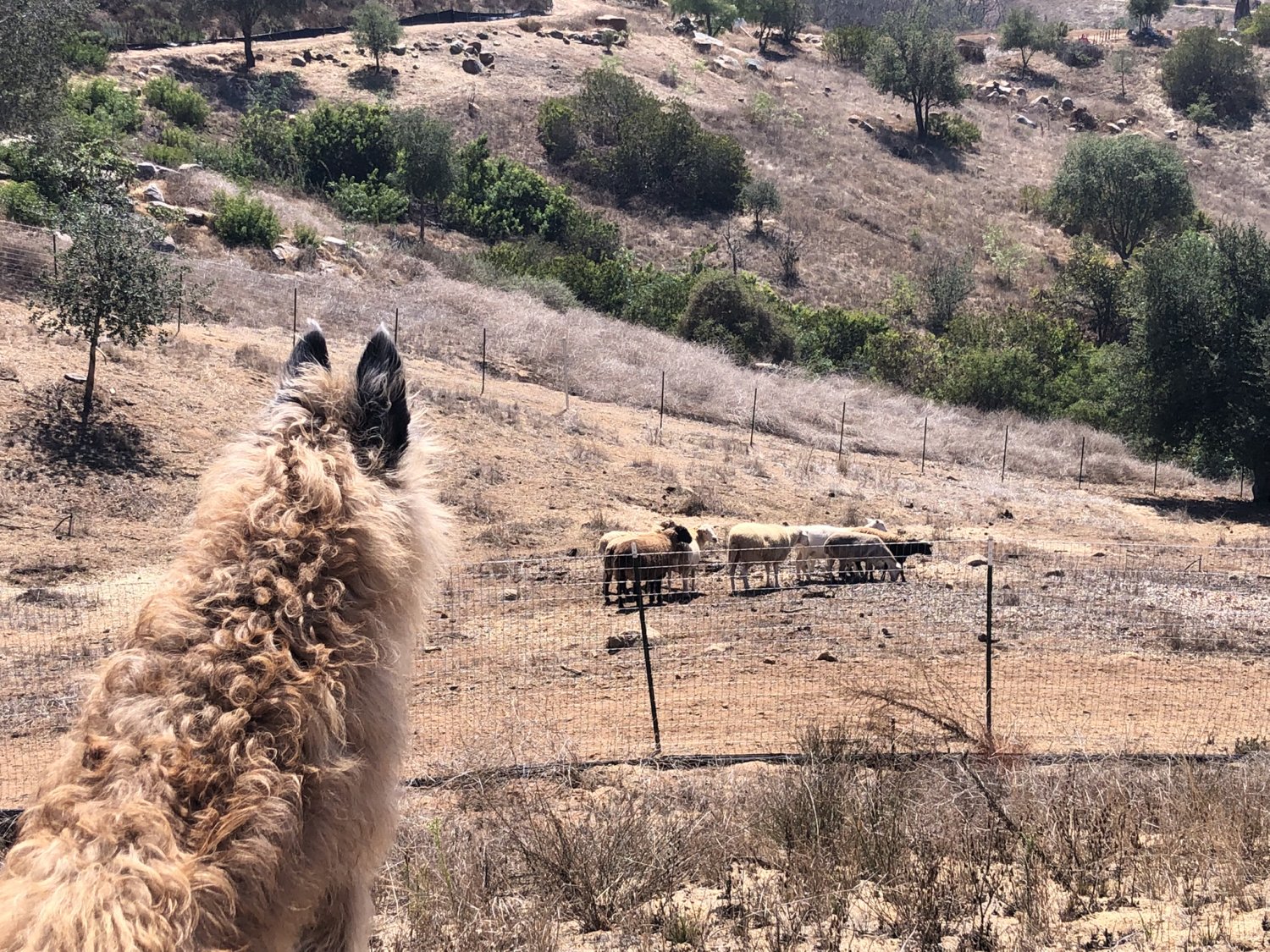 That's what I was thinking.

Not much is new today on the ranch. However - my vet appointment for Obi Wan was moved up to today YAY. I went back to my old vet - over an hour away - he's the absolute BEST. The veterinary snafu and nightmare with the local vet is over with a capital O. Thank God. My old vet went over his shoulders, forearm, and all the toes checking soft tissue and bone. As he was going over him Obi did the sneak kisses. That's my dog!! Doc said that everything is excellent. He was glad that I used the cold laser when the cast came off. He has high praise for cold laser. Had a great chat with him and being I was the last appointment for the day we had lots of time. He loves that Obi is a working dog and understands what all that includes. He's the best and hasn't retired yet (phew) . Readers Digest version - Obi Wan can go back to work!!

I love it when a plan comes together!

Forgot to mention the old truck sold on the weekend. We are now truck-less until the new one gets to the dealer and we go pick it up in IA and drive back via OK to pick up a trailer.
Worked the puppies today and they both did great. Nice flanks and amazing stops even yay. I had Obi work all the sheep - put the news in with the olds and the three that came in on Monday. He did a nice job and they all moved together nicely. I could even stand next to the new ones (nick named "The Littles"). They still aren't to sure of me. I should probably put them in the corral and sit by the feeder with a book for an hour. Sheesh - where is the spare hour??!!

I also did some work around the front of the barn planting, sorting palettes to move to the large arena and watering. Obi and the pup Zo just hung out -- time for Zo to learn to be chilled when I'm putzing around. He did ok.

Ahhhh sooo good and relaxed now.
Spent the morning grazing the side of the driveway / ranch road with 6 sheep - three from here the other three (just added on Monday) from my friend I shared sheep with. Interesting to note that of the six "my" three knew to drop their heads and graze. The other three I figured out had no idea that it was ok for them to eat. They've been used extensively for training dogs that compete in herding trials. Hmmm - meaning that if there is a dog around they are supposed to move! They eventually ate some and really got the idea when I took them to another area that has wild buckwheat -- super tasty stuff for them.
So while grazing
- the crows/ravens scolded us -- we set out mice we catch in traps on a big rock "Mouse Cafe" and the birds come in for their tasty morning snack. But no mice today.
I got to watch the scrub jays fly from tree to tree.
I could hear the birds singing.
AND the BEST - the California Quails were skittering around near the sheep. LOVE watching them. They are very shy little guys and gone in a spilt second when they feel something is not right. They hung around for at least five minutes - not threatened by dog or sheep. Sooo peaceful. LOL These lil' birds are the Dr Suess of the bird world with little "deely boppers" on their heads.
When we got back to the barn I added "The Littles" into the flock and worked them all with Obi, and then for the first time with Ree - Miss 100mph and wide. Got her to settle into slow and easy with good stops and I was even able to touch The Littles and the three "new" ones. None of which wanted to be near me before. Progress.
Taking the sheep out and grazing them is so calming. I love it and I've missed it since Obi broke his toe. Watching them out in the pasture is nice, but it is not the same.
Of course I took a bunch of photos with my phone - prime fodder for my "cards" I snail mail to friends who need a bright spot in their day.
On to other news, the new truck made it to the dealer today. Looks like we'll go get it in early October.
Oh and got the automatic waterer installed in The Littles stall. Cleaned out two kitchen garden beds, one more to go and then plant peas, beets, and beans. I might try some peppers and cucumbers while I'm at it.
Pics from today.....
Grazing the side of the ranch road where it is green and growing since the rain. 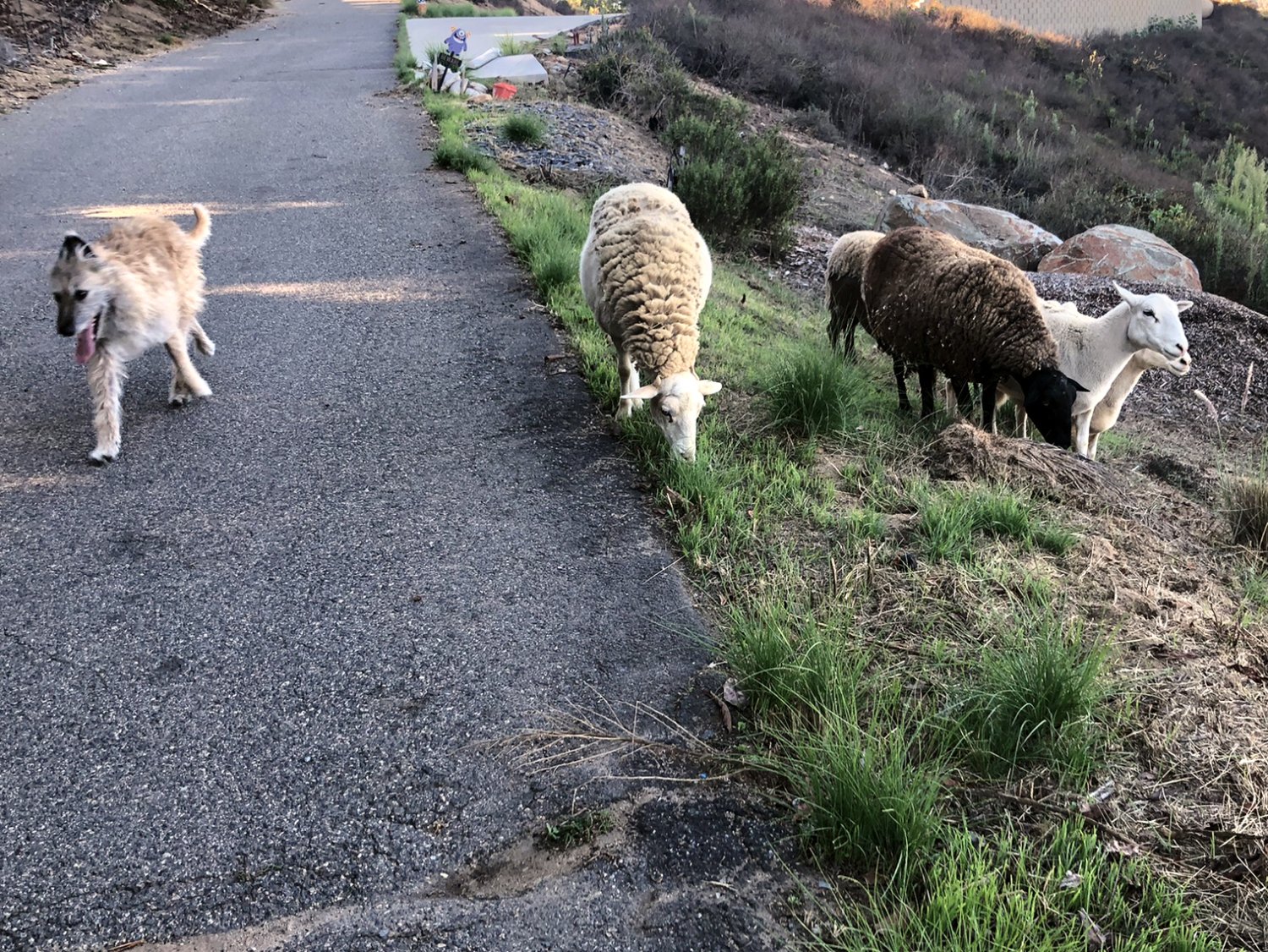 Quail and sheep -- they are sooo little I really need a camera and not the phone to get photos. 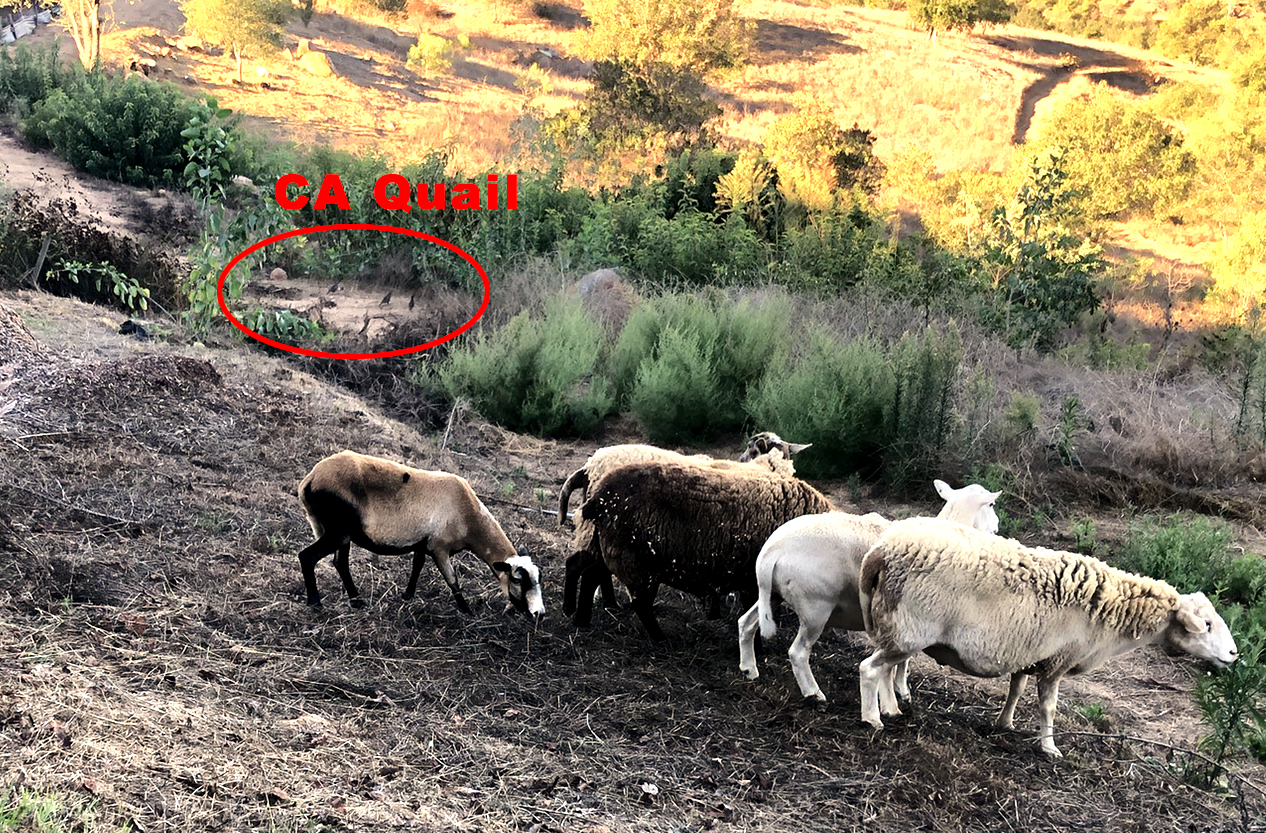 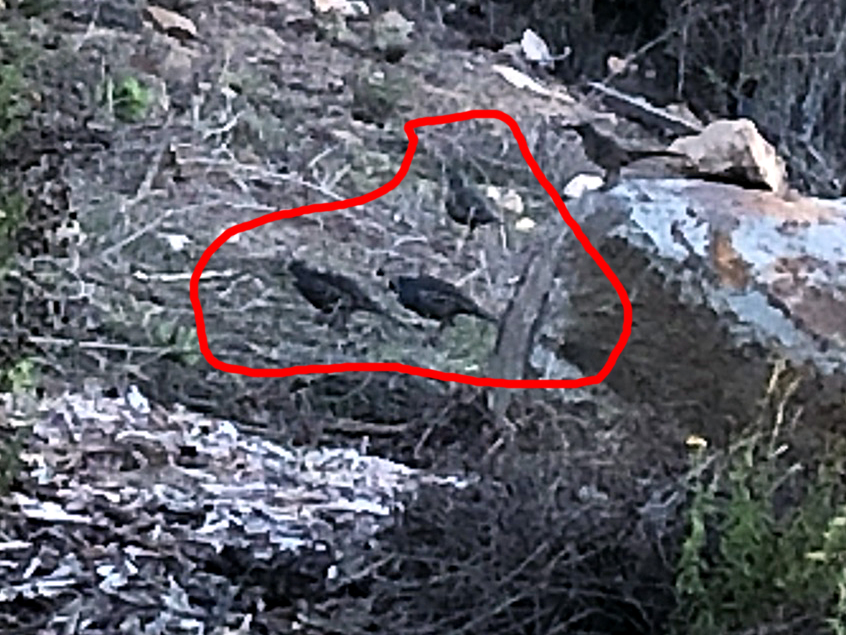 So far a pretty normal Saturday. Took ALL the sheep out with Obi, had him work them in the pasture "graze style" including The Littles. I want to get The Littles used to the graze style so when we go out they will move calmly on the ranch road and then move into a graze area and actually eat. They actually did well today. Big moments in that I had Obi hold the flock to me and I was able to touch and stroke my hand over the back of each of The Littles. I still need to get out there and sit with a book and read with them. But geeze that feels like I'm ignoring other work that needs to get done.

, local business and they have the best price.
Set up some "new" palette panel obstacles in the big arena. It should be fun to work them. Students will probably think I'm crazy - but it's all about reading your sheep and working together with your dog.
Thinking of enlarging the chicken coop/run - but that will have to wait for the cool weather to return - in the 90s today again.

Pretty much just did ranch chores - getting odds and ends done - lots of them even. I need a few more days like this!!!
First off I took care of the sheep - used Obi and then Ree to move them around and hold them. Wonder of wonders I was able to touch all The Littles and head scratch two of them. Not long, but it's a start.
Alright all you guys who are feeding cracker treats - I have to go get some. Any better than others?? Guessing to not get something too tasty and it ends up 'one for you' and 'one for me'

.
I DO have some horse treats (from the May horse debacle) and the old sheep like them. OMG one of them will take them from my hand even.