Senile_Texas_Aggie said:
Could you folks help me identify them? Are they birch? Ash? White oak? Something else? They have bark on the lower end of the trunk near the ground, but it appears to peel off the higher you go.
Click to expand...

I have quite a few White oak here yet and it's bark doesn't peel off. It's a rough flat kind of bark all the way up, a little lighter in color than other oaks. Acorns of a white oak tend to be larger than other oak acorns. The leaves are distinctive tho. 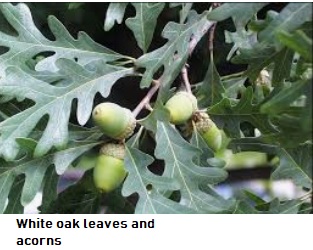 Thanks, Mr. @greybeard, sir! Until you posted the picture, the only way I would have known a white oak was if it came up and introduced itself. I just guessed white oak because of the name. Having been a small town / suburban dweller my whole life until now, I know very little about trees, bushes, etc.

Senile_Texas_Aggie said:
We do plan to try to keep the growth from coming back. But what is the best way? Spraying with Roundup & Remedy? Mowing?
Click to expand...

The cut saplings should have been treated within a few minutes of being cut down..preferably individually.. By now, a thin membrane of impenetrable sap has plugged off the xylem and phloem of the little stumps and herbicide won't do much. I would NOT use roundup tho, especially not widely sprayed. That's a drainage area, it needs grass roots to hold the soil and roundup is non-selective........it kills everything (or so it claims). You don't want to trade underbrush for erosion.
Next spring, recut the new growth, spray or paint the stumps with a selective post emergent herbicide containing just triclopyr or one containing triclopyr/picloram/aminopyralid.

Remedy = triclopyr and Grazon Next =triclopyr/picloram/aminopyralid.
Grazon Next is a federally restricted product...you will need an applicator's lic to purchase it. You will not need said lic to buy Remedy.
Do not spray either product directly on any broadleaf plant or tree you want to keep. Keep it just on the stumps tho a weak mix equating 1 qt herbicide to 100 gal water (cut down of course) sprayed on areas containing both desirable grasses and broadleaf plants will usually just kill the broadleafs and leave the grasses alone. (it will kill clover tho...clover is not a grass...it's a legume)

On cut stumps, you can also use Tordon and it is available by the qt as an RTU product...premixed. It is a mixture of picloram and 2,4d. I have used Tordon as a cut stump spray and as a 'hack&squirt' treatment. (cut stump treatment works any time during the year as long as it's done right after cutting.)
"hack&squirt" should be done right now, as the sap is falling and will carry the herbicide to the roots> IMO, this guy went a little overboard with his hacking part. You only need to hack it about 3-4 places around the trunk, not in a continuous circle. It only takes one squirt in each cut.
There lots of info available on line for both cut stump and 'hack&squirt' methods. 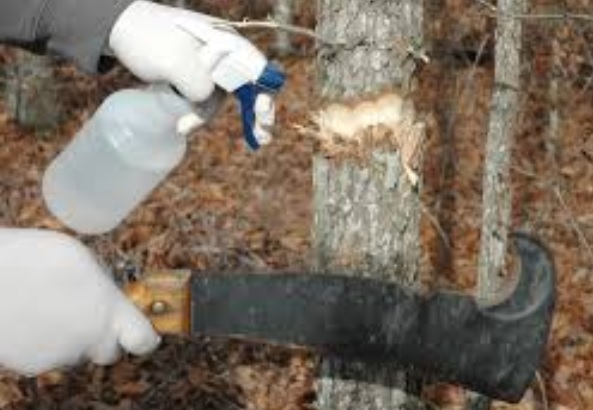 I usually use a hatchet.

I prefer the triclopyr because it has no residual...no soil activity. Grazon does...so does Tordon. that residual effect comes from the picloram. For cut stump and hack&squirt, residual doesn't matter much but for broadcast spray in a pasture, I do not want residual activity.

Senile_Texas_Aggie said:
Thanks to all. We do plan to try to keep the growth from coming back. But what is the best way? Spraying with Roundup & Remedy? Mowing? We have a lot of areas we want to trim back, so we are slowly working each area as we go. Our current area is the creek that flows through our property. Dummy me forgot to take "before" pictures prior to starting, except for a small section:
View attachment 54006

But once we cleared away some of the brush, we found several trees we did not know were there, growing alongside the creek. I am not sure what kind of tree they are. Could you folks help me identify them? Are they birch? Ash? White oak? Something else? They have bark on the lower end of the trunk near the ground, but it appears to peel off the higher you go. I am standing at the base of the tree in the third picture. Unfortunately I did not have @Mike CHS to stand in front of me and block my face the way he did Miss @Rammy, so you will experience the full shock effect.
View attachment 54012 View attachment 54015 View attachment 54016

Senile_Texas_Aggie said:
We do plan to try to keep the growth from coming back. But what is the best way? Spraying with Roundup & Remedy? Mowing?
Click to expand...

Personally, I would stay FAR AWAY from RoundUp. That is very toxic. As GB said, it kills everything, and is not safe for you or any future animals you may have. Not to mention, that when it rains, it can wash into streams, which end up taking it to the ocean, where it can kill ocean plants. I think I heard on the news, lately, that RoundUp is responsible for the awful, toxic, Red Tide in Florida.

The most efficient way to keep briars and other invasive plants under control, is to run livestock on your property. Goats are very efficient at clearing undergrowth. FYI, goats browse (eat undergrowth) and sheep and cattle graze (eat grass).

Devonviolet said:
As GB said, it kills everything, and is not safe for you or any future animals you may have.
Click to expand...

I said it 'claims' to kill everything (plant wise). It doesn't. There's lots of plants it won't even phase.
It has not been shown to bother current or future livestock animals especially if/when used according to the label directions. The specimen label on any and all pesticides and herbicides Is The Law.

It (Roundup)will kill water plants as well, and of course algae. A pity it can't kill the algae that causes the red tide tho, as dead plants aren't causing red tide....live plants are. It would take way way more than what is used each year to even make a dent in the algae that causes red tide, and even then, it's doubtful. And Gulf Coast red tides have been documented going back as far as the 16th century, well before glycosphate was developed. And it's not the algae that actually causes the problem.......it's a brevotoxin the algae creates. (named after the algae Karenia brevis.) K.brevis is always in the water, but when nutrients in the water increase, K.brevis really starts growing and reproducing and as a side effect/waste product, make more brevotoxin.

STA, do you have a picture of the leaves on the trees in question? And a close up the bark, peeling and not?

Without a close up of the leaves, I would guess sycamore. It has a very attractive peeling bark that exposes the white bark underneath.

Baymule said:
Without a close up of the leaves, I would guess sycamore. It has a very attractive peeling bark that exposes the white bark underneath.

They like to drop limbs too. They have a pleasant odor about them tho, I think it's from the balls, which will dry up and blow away in little wisps. 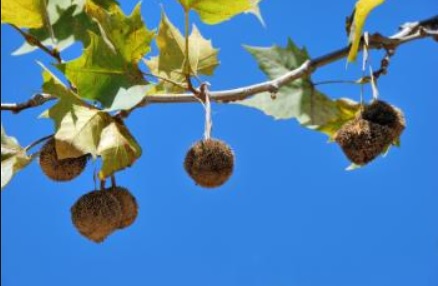 You could I suppose, always replace the sycamores with juniper.