I put them back in there today while a neighbor and I butchered 10 chickens. Poor dogs. They were expecting a paper bag beating.

Because of the rainy, cold, drizzly day, I felt sorry for Sentry and Sheba in their pasture and let them out. They do have shelter they can get under a part of the barn. So where are the dogs? Sentry, Trip and Carson are on the porch, snug in the dog beds. Sheba? At the gate to the Sheep lot and barn, in the drizzling cold. Her dedication blows me away.

Robert and Sharon came over at noon, Robert opened the gate, closed it and walked to the house. Sheba stood her post and barked at him. BJ's therapist came at 12:30 and I walked to the gate to let him in. Sheba decided she had enough of guard duty and followed me to the house. When the therapist got out of his car, Sentry growled at him. That's why I went to the gate. We sent him a text this morning telling him that the dogs were out and NOT to open the gate or get out of his car until I was there to walk him to the door. Trip, Sheba and Carson were friendly, but not Sentry. The therapist thought the dogs were awesome and took pictures of them to show his wife.

Pasture #2 showed a little growth so I let the sheep in to graze. For Sheba, this was the first time to be in a field with baby lambs. I kept checking on her, but I had the pressure canner going. So I sat where I could see part of the field. Check canner, ease out door, slip up close enough to spot the dogs, watch, go back to check canner, repeat. About an hour later Sheba finally got bored. She approached the lambs, they moved away, she followed. They ran to momma, Sheba broke into a half run. By that time I was halfway there, grabbed a paper Feed sack, yelled SHEBA NO! And I was in the gate. I beat the sack against my leg while I scolded. Instead of that blank look I normally get, she rolled over and squinted her eyes. A first!! Breakthrough! I finally reached her!

Sentry had never left his spot where he was on guard and he was trying real hard to show me that he was being a good boy. I wanted to laugh. I called him and he ran to me, delighted that he wasn’t in trouble. LOL LOL Sheba poked the back of my leg with her nose and I petted her. Then we walked around while I praised them both. We made progress today. 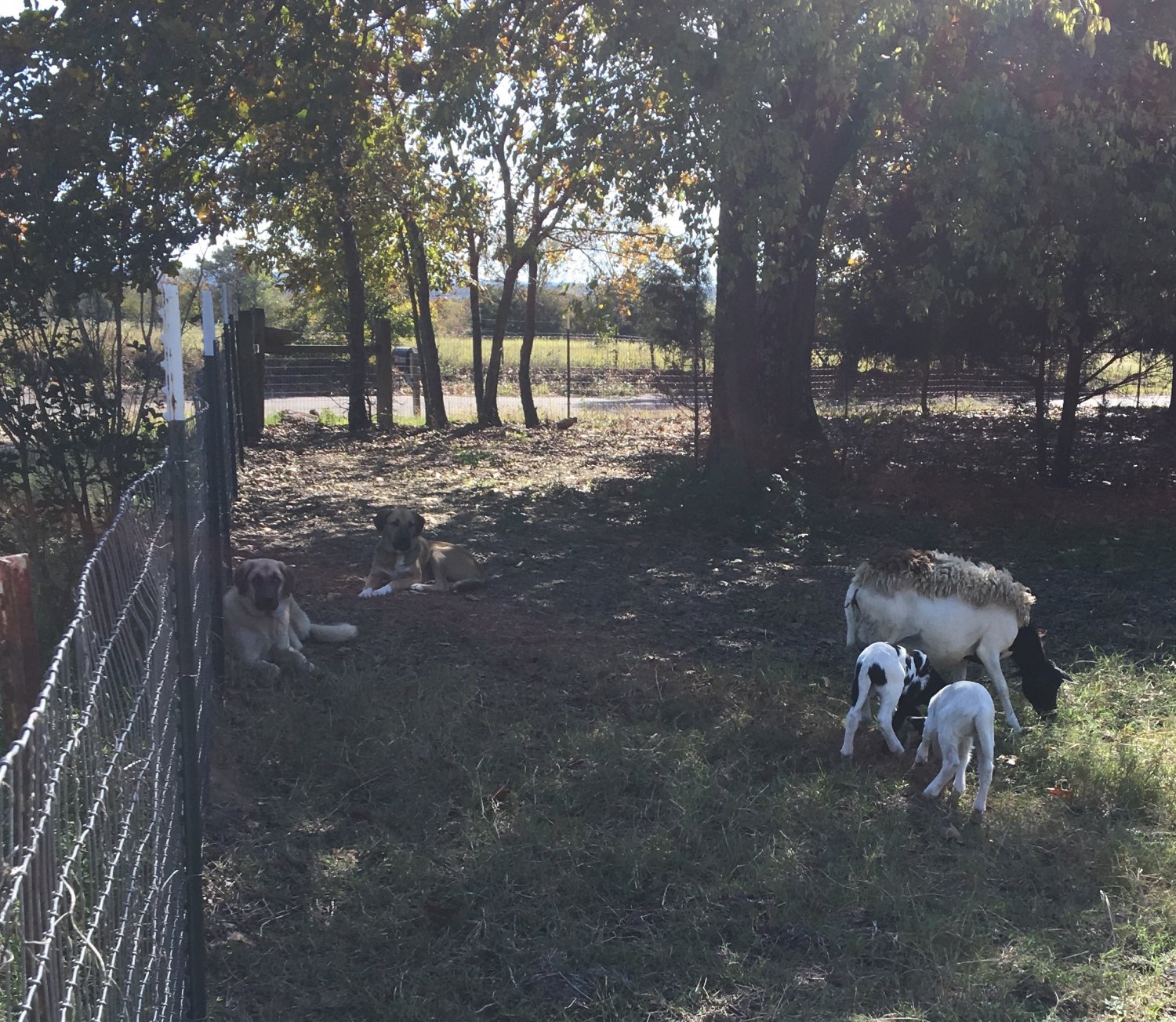 Baymule said:
The therapist thought the dogs were awesome and took pictures of them to show his wife.
Click to expand...

After chores this morning I fixed us a frittata for brunch.
You have food? 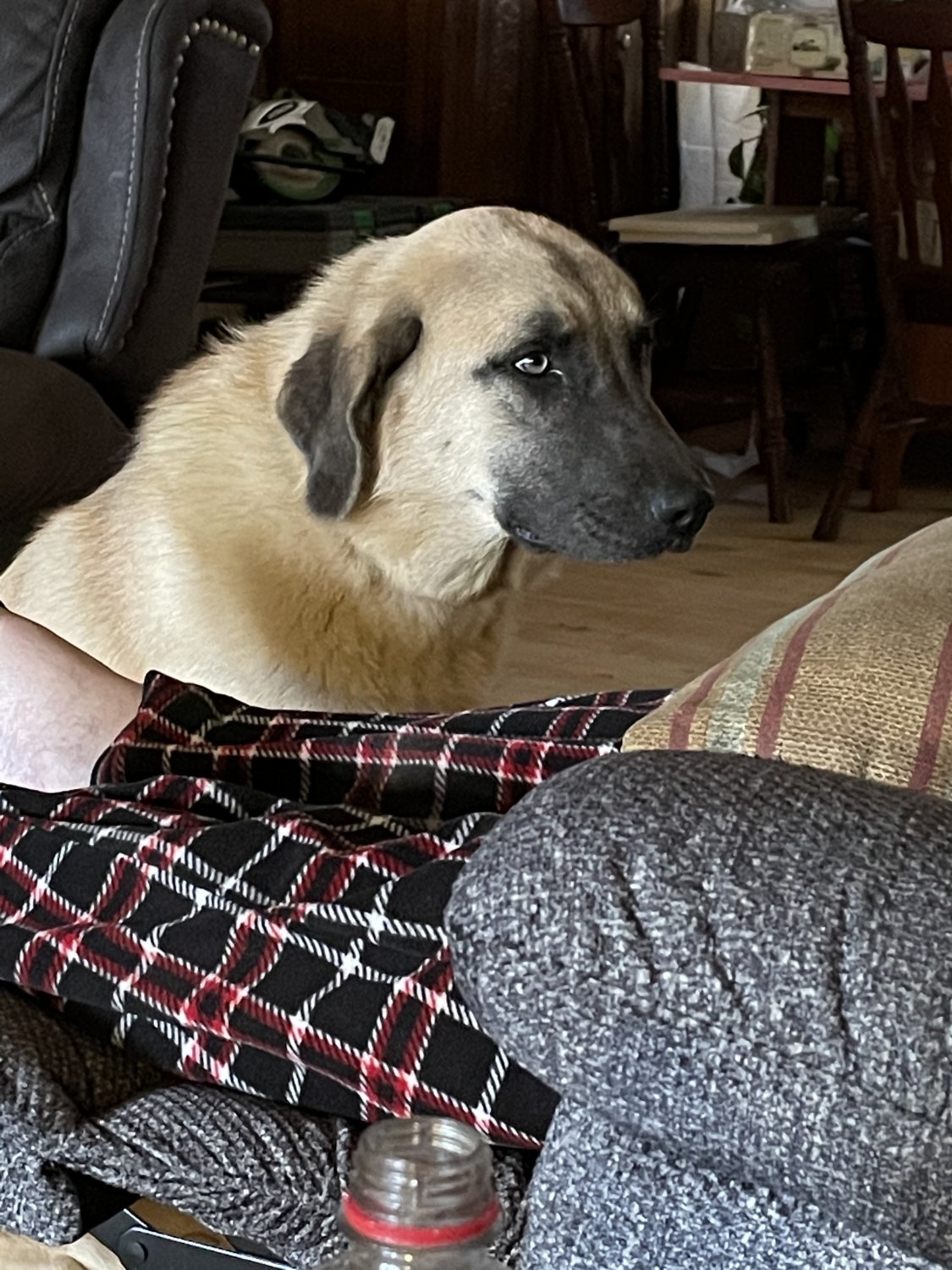 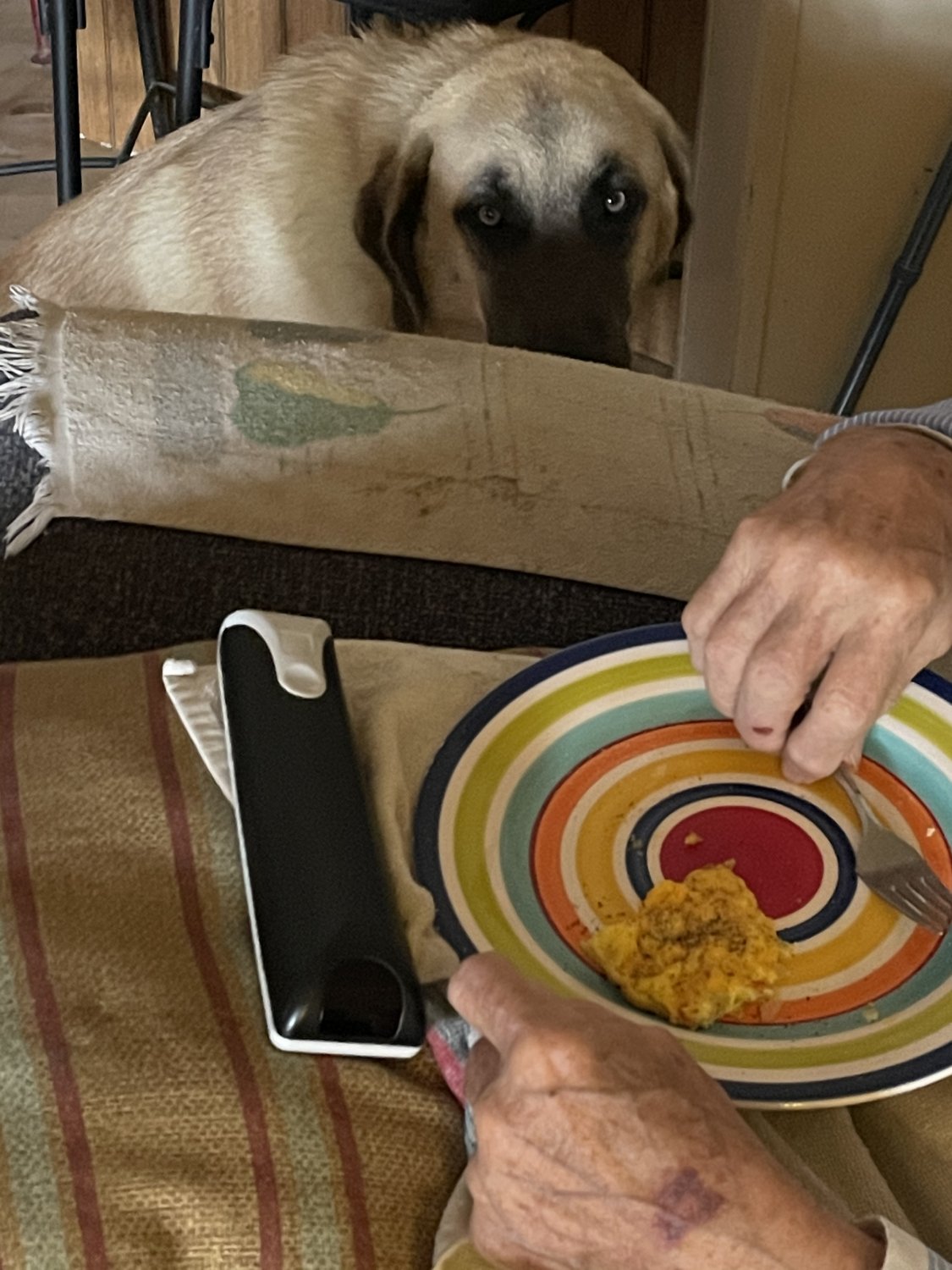 What? Go lay down? I’m sure you aren’t talking to ME! But just to make sure, I’ll just peek from back here.... 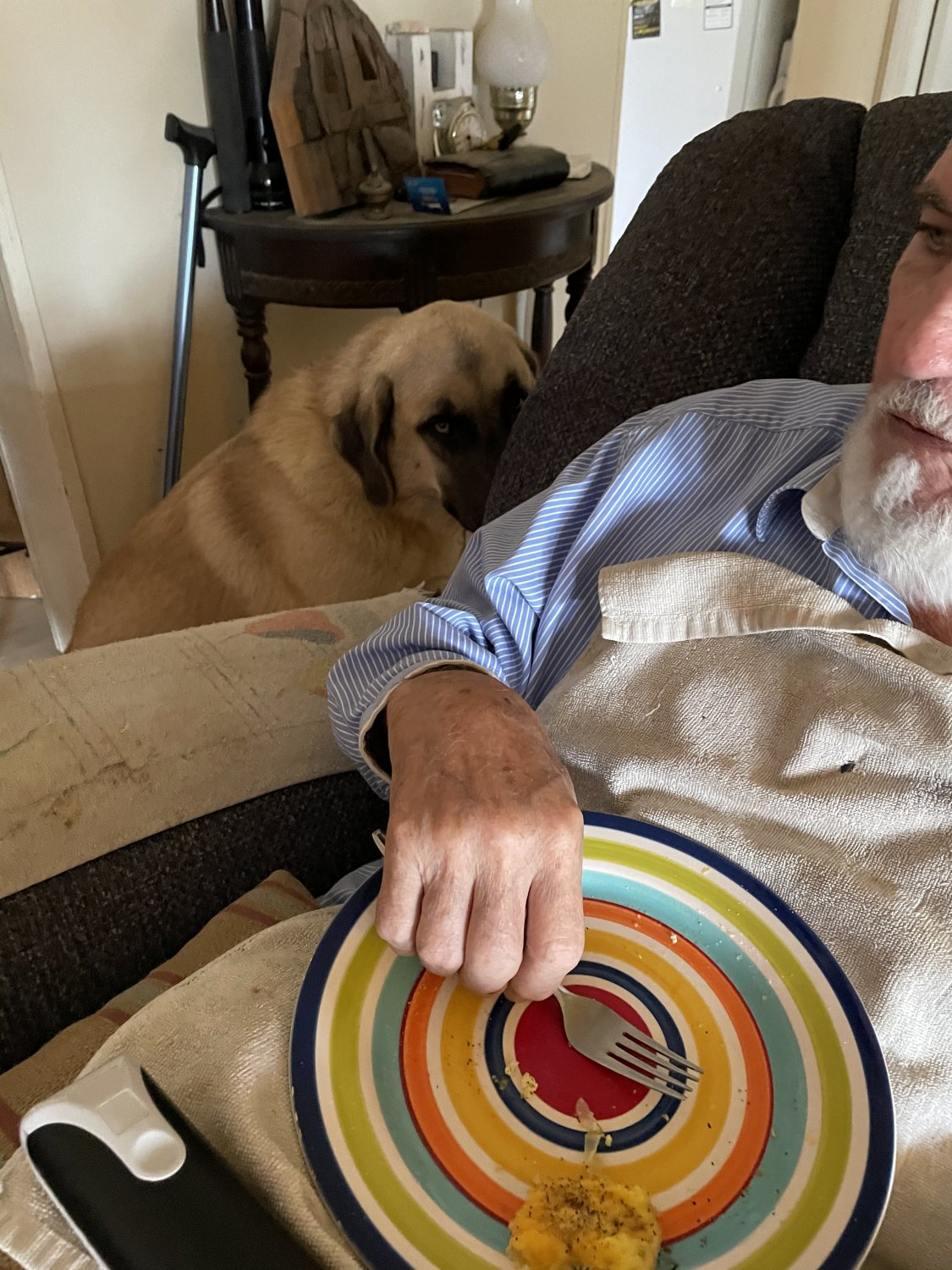 How about if I nudge your elbow from this side? 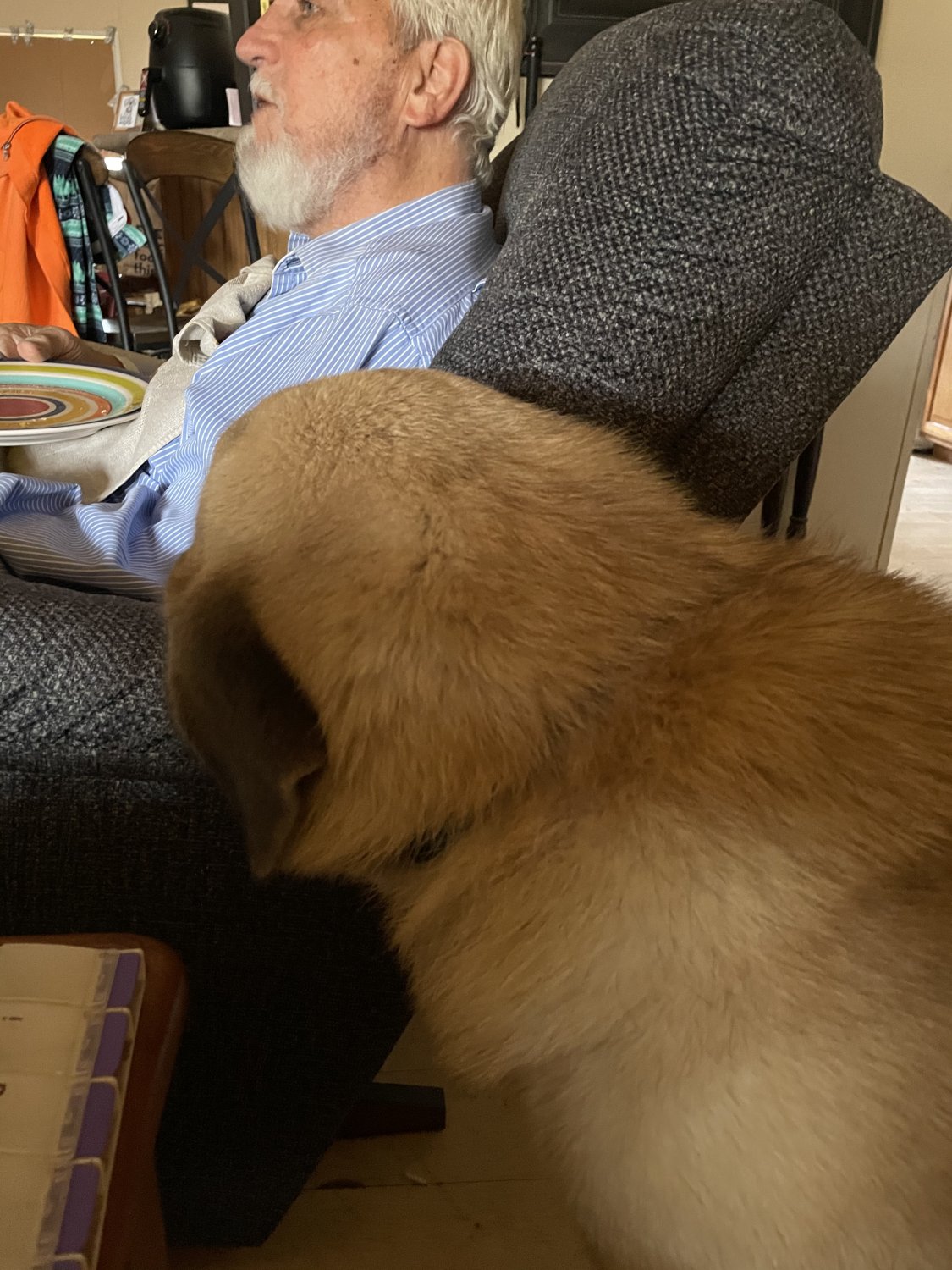 BJ saved her a couple of bites, she worked on him for those bites! He always gives her treats and laughs at her antics. How can anybody look at that face and not laugh? Of course she gets a bite! She doesn’t beg from me, only him. I teach Sheba manners, BJ teaches Sheba to be an endearing beggar. We love this spoiled rotten dog.

I think Sheba has his number, lol! But, you're right...how can you not give in to that face!

DW's cat will get in her lap at the table and try to get food off the plate. Me, I'd put her on the floor if she did that to me (has never tried) but DW just keeps pushing her face away from the dish. Of all the odd things she likes French Toast and yes, like BJ, DW saves her a bit.
F

Sorry, animals are not allowed at the table or where I am eating. As a kid, to not promote any feeding from the table, all animals were not allowed in the kitchen, where the table was. They always got leftovers etc in their bowls after the meal was over. And they were always fed BEFORE we ate.... all animals got their meals, feeding, before we ate. That was a rule as a kid growing up. They had no choice since they were caged, in a pen, in a stall, whatever. They got fed and taken care of before we were fed. Their needs were seen to first.
I try to still follow that. Different with those out on pasture, and sometimes it is not practical to go 5 miles away to feed then come back to eat then go back up there.... but overall, I try to see to it that they are taken care of first if at all possible. Living at the same place will make it easier with the chickens now. But they can be "fed ahead" so that they have it in front of them and such like that with the other animals having hay all the time and such.
y white german shepherd did not ever beg and I would not have allowed it. She knew that I would share, but that her dish was where she ate and that the table was not her place. She was my shadow for over 8 years and I would take her any/everywhere with me.

I tell her no, she gives up. BJ tells her no, she ignores it and continues to stare. She knows he doesn’t mean it. I’m the Alpha, I rule.
You must log in or register to reply here.
Share:
Reddit Pinterest Tumblr WhatsApp Email Share Link