Finnie said:
This makes me think of the “dead mouse” smell that will hit us when we are halfway down the basement stairs, if the traps have caught anything. I wouldn’t be surprised if you find a dead mouse behind your fridge.

Hopefully it will just be actual garbage. Maybe the cats knocked something under there.
Click to expand...

It's definitely a garbagey smell - not a dead-thingy smell...
You'd think it would be easy to find... there's ONLY so many places it COULD be coming from....

A friend made a toy box that has found it's way to being 'stored' in my barn. I planned to stand it on end and put shelves in it to make it a cabinet for storing nails & screws & fence insulators & all the other bits & pieces. It's roughly 4.5' long and maybe 18-20" deep with a piano hinged lid (door).

BUT - I want to pickup some meat birds this spring and I will need a brooder to start them in. The one I've used for YEARS finally rotted an got a ride to the landfill.
This is nice plywood & chicks are NOT clean & tidy little critters. I'm thinking that - if I cover the top in hardware cloth & spray the inside with flexseal - that this would make a good brooder.

Anyone use flexseal around chicks??? It says it's safe....
I figure I would only need to cover the bottom (right now it's the back of the 'cabinet') and a few inches up the sides.
It won't matter once they're in the coop & this is back to being a cabinet that the back is rubberized painted.
F

Don't know about the chicks... do it now and let it air out for weeks and weeks.... I used the "tape" flex seal for the cracks in the bottom of the "molded" tub/bath surround in the bathroom so it won't leak until I get to some renovations in there done. I can't see where it would hurt them if it has plenty of time to dry and air out....

Weird smell in the kitchen update:

A precious friend just suggested that maybe it's me.
Slightly offended .... I asked what she meant
She said 'well if you only smell it when you're there... then maybe it's you' .. and I guess that you can't argue with that kind of logic
🤯
Last edited: Jan 18, 2023
M

Soooo....I would buy a heavy plastic floor tarp and staple it in the box, tale edges to box. Remove when done. Or, polyurethane, dry outside air couple months wash out when they're out of it. Fast as they grow, a doz will outgrow it in a very short time. You'll need a place for them. 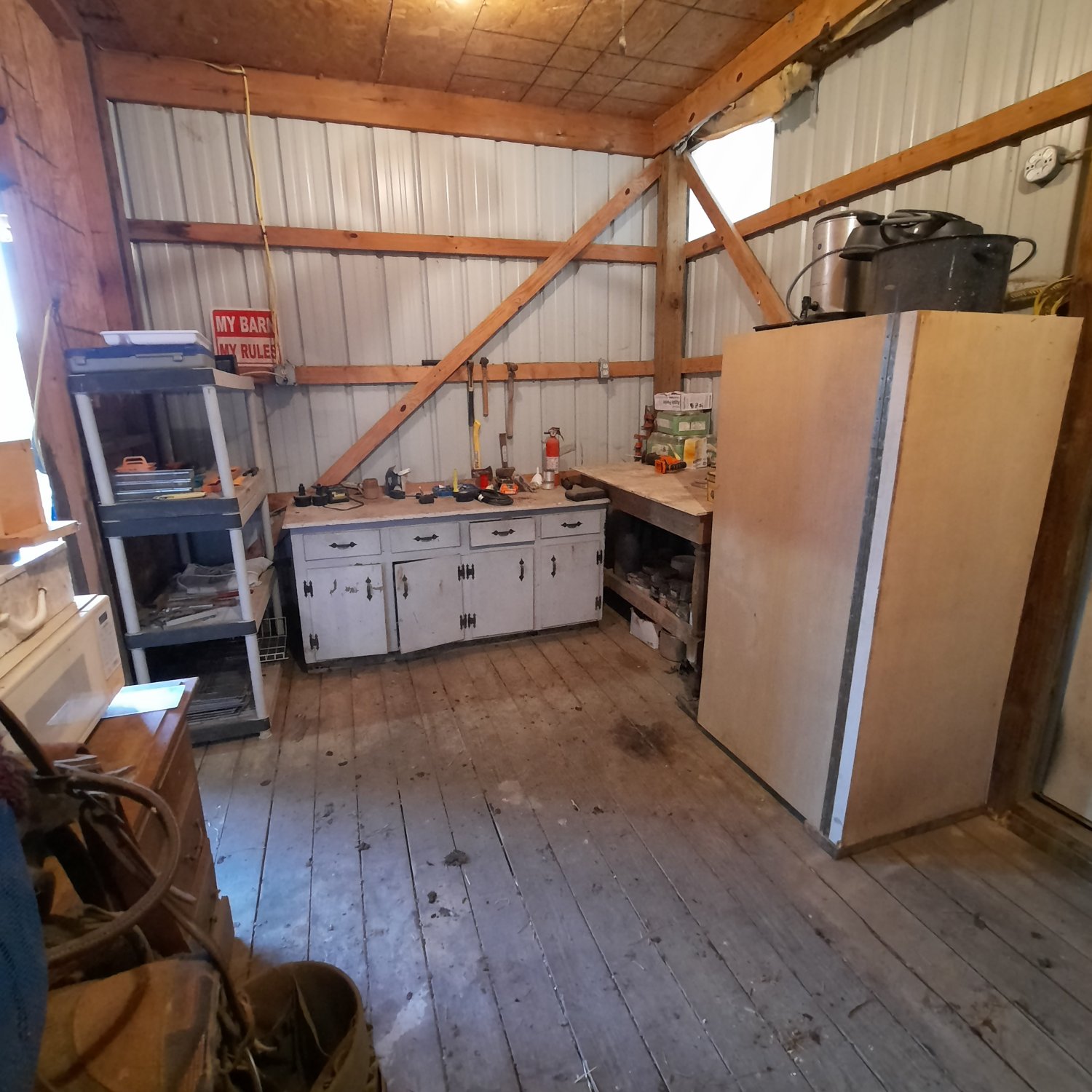 That old kitchen counter turned out to be in the best shape of my 3 'work top' options! The table on the right left 6" of rotted leg behind when I moved it.... but we put that side against the wall so it's sturdy again 🤣
Stacked in the tall cabinet is all of the tools that have cases. It will become my brooder in May.... then go back to being storage.
We found dozens & dozens of wrenches, screwdrivers, ratchets & sockets and pliers of every kind. They all have new homes in the drawers.
The under cabinets have tools that didn't have cases & some assorted bits & pieces. 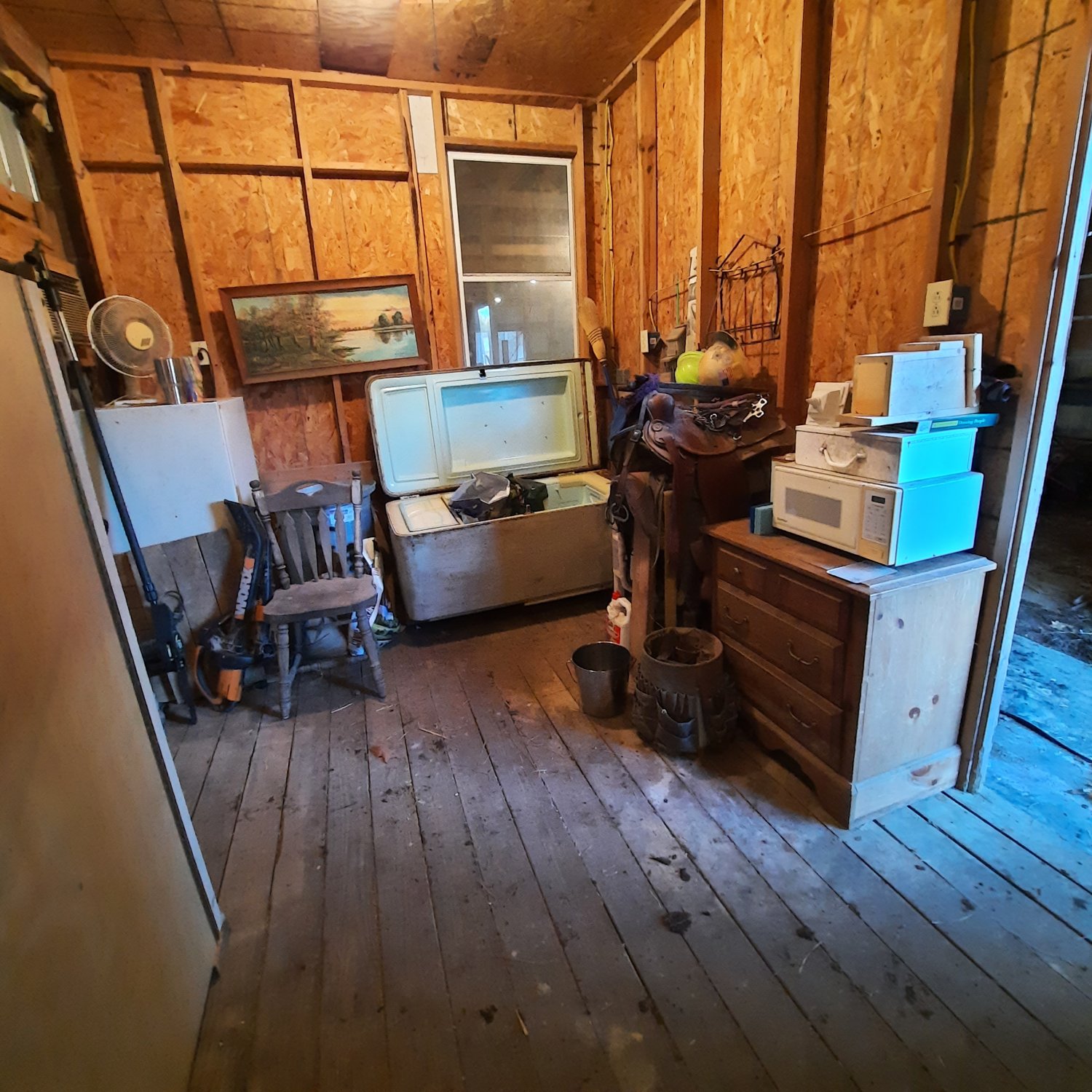 We also cleaned out this space under what I call Cougan's Attic. There was a wall where the ladder is leaning. It was dark & nasty under there. Soon it'll be storage for tarps, extension cord & hoses.
The space above ( Cougan's Attic) was FILLED with junk that people had asked me to store.... "just for a little while". Now it holds the emergency kerosene heaters, coolers, pet carriers, etc. I'm hoping to maybe get a set of steps built along the wall. I'm not good on ladders & it's really hard for me to get things up there & back down. We put everything right on the edge & made sure I could manage it one handed - for now. 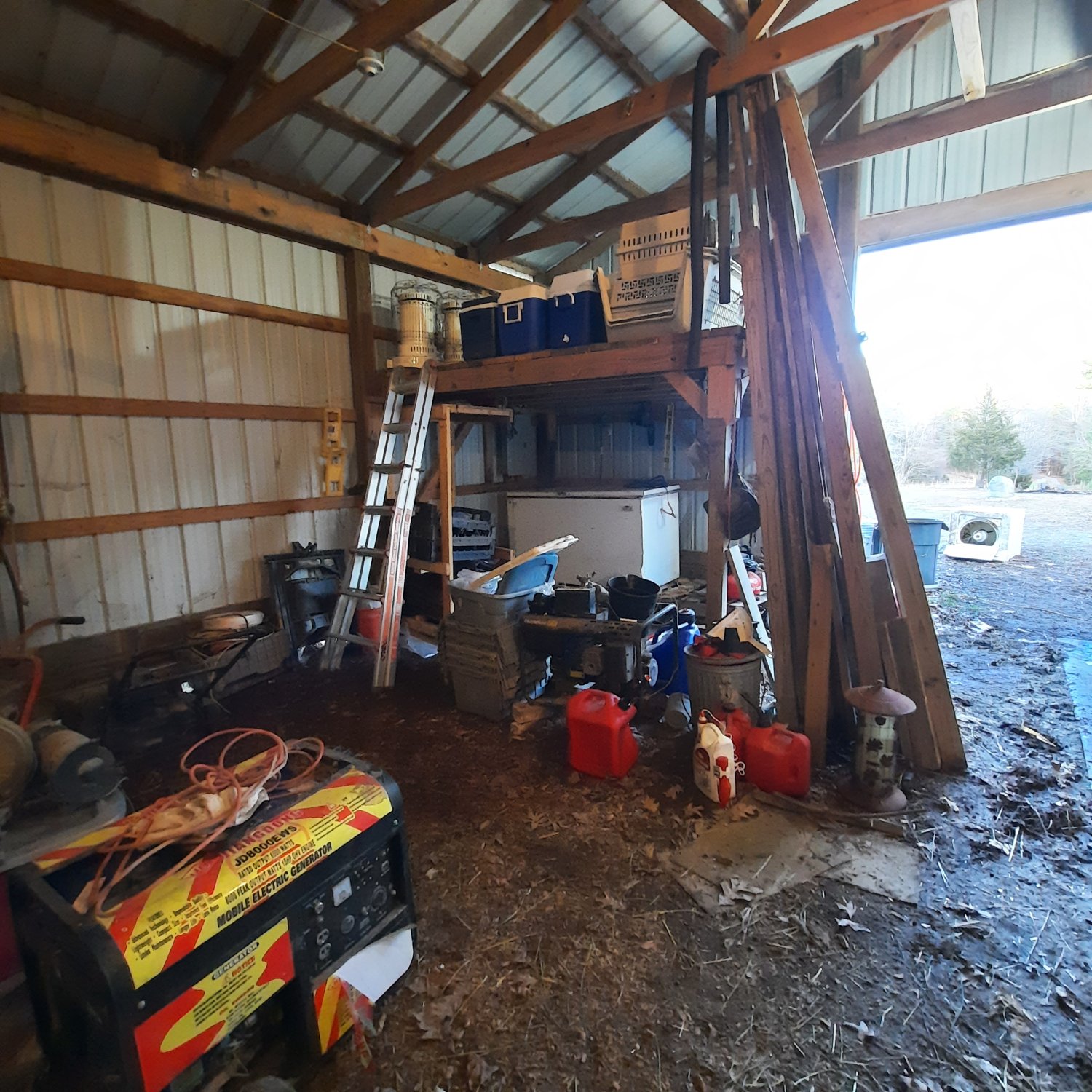 Also had a guy come by to look at my broken generator. He said it would cost as much to fix mine as to replace it. Then he said that he had one just like in his shed that he'd sell me for $100.
He's going to bring it by in the morning & let me try it out. We'll flip the cutoff switch & see how it does running the whole house.

EDITED TO ADD:
IF he comes through with the promised $100 generator, I'll be moving THREE non-working ones out of the barn as scrap metal.
If anyone is near enough to pickup & wants to tinker - they will be free to a new home.
1 (last time it was started) the motor ran fine, but the generator didn't make any electricity.
2 (last time it was tried) the pull cord wouldn't go back in & I wasn't willing to manually wind it back in between each pull
3 starts, runs, makes electricity - but leaks gas bad when it's turned off. Several gaskets & other parts have been replaced... leaks worse
Last edited: Jan 22, 2023

Ridgetop said:
Glad you kept the bedside table with drawers too. Drawers are handy for small livestock stuff. Put some mothballs in the drawers and that will keep out any mice. Nothing more heart stopping than opening a drawer and having a mouse jump out! Except maybe a rat.

I should have done that with BJ’s desk. When I cleaned it out, I found a nest of dried out mummified baby mice. I’m guessing rat poison got their mother. I’m also guessing he didn’t open that drawer.

I wouldn’t ruin the wood box with chickens. I use those big plastic horse water tubs. I put down pine shavings and clean twice daily. When done, the water hose cleans them right up. To keep them from sticking together when stored, I put something in the bottom of one, so the next one won’t “nest”.
A hardware cloth top and auto clamp on aluminum shield light and they are set.

Put shelves in that box and organize some more!

canesisters said:
I am my messy family who ignores all of my careful planning and organizing.. Most of my mess is caused by me not having time to follow myself around & pick up all the junk I just put down after using instead of putting it away.

I aggravate myself half to death most days
Click to expand...

All of us farm gals need a wife! Mine would also cook on the days when i am so busy with a project I forget to cook until 8 pm!

canesisters said:
I'm hoping to maybe get a set of steps built along the wall. I'm not good on ladders & it's really hard for me to get things up there & back down. We put everything right on the edge & made sure I could manage it one handed - for now.
Click to expand...

What about an old child's slide? You cold just slide the stuff down the slide instead of trying to negotiate the ladder with boxes in your arms.


Baymule said:
I wouldn’t ruin the wood box with chickens.
Click to expand...

I agree with Bay. Use the wood box for storage with added shelves and use plastic or rubber tubs for brooder. I would also add legs to the box side just to keep it off the ground. Just a couple chunks of 2x4 would do. No matter what you do to seal the wood from the chicken poop and water, the smell will remain and you will have a smelly box if you decide to use it to store stuff. Installing shelves will make a nice sturdy cabinet to store stuff in that you don't want to get all dusty. I installed both overhead and lower kitchen cabinets in my tool shed. I got them cheap at Habitat for Humanity outlets. Love them! Tools without boxes are on shelves in lower cabinets - some of the cabinets have pullout shelves! Score! Overhead cabinets hold spray paint cans, small cans of stain, varnish, smaller building stuff - hardware - is sorted into labeled plastic shoe boxes, small specific tools also live in labeled plastic shoe boxes in the cabinets. Drawers are labeled for small tools, sockets, etc. Labeling helps me remember where a tool lives and where to find it. However, I need a hasp and padlock to keep out those messy family members that pay no attention to the labels - even when standing next to the labeled storage and bellowing: "I can't find . . . !" LOL

OK -- third vote - don't use the wood for the chicks! Plastic rules in this case. I use the big storage tubs. Cover with hardware cloth (that 1/2 in wire mesh stuff) that way when the chicks grow out of it I store the brooder/chick stuff in the tub -- all in one place and ready for the next time I get chicks. Just don't lose the tub (wondering where mine is now -- thinking of getting some more chicks this year).
You must log in or register to reply here.
Share:
Reddit Pinterest Tumblr WhatsApp Email Share Link