Coy does have a lovely smile! Just as lovey as her new friend Dhole (type of wild dog) but I’m calling her Doll for short lol 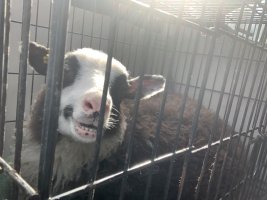 Yeah…I did a thing…I have my hay in and everything just sort of lined up perfectly for this little lamb to join the crew.
Doll is a pure Finn. I could even register her if I feel like doing the paperwork. Finn, Jacob, Scottish Blackface, and Icelandic are my favourite breeds based on my research, but Finns are the only ones who are polled, so she’s my new baby!
Here she is with Coy. She’s almost as big already, which is great. 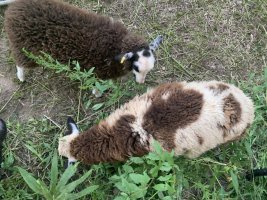 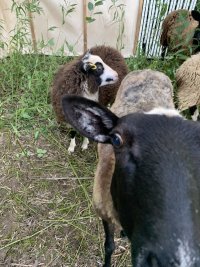 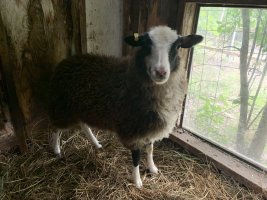 She really reminds me of Kit’s little ewe lamb that I wanted to keep, but without the psycho temperament! I’m very happy with her so far.
I’m thinking if she does well and I love her and her breed in general, my next ram will be a Finn and we can go from there.

Congratulations on the new Doll! She really is a Doll. It will be interesting to follow along as she grows up and has lambs.

Had a couple of cool days, so I spent them cleaning out the barn and getting some things organized and cleaned up. Still a ton to do—as always—but I’m slowly making progress. The last few years I’ve been out of commission for heavy duty fall cleanup, building, and repairs, so I really feel like I’m playing catch-up this year.
I just hope I actually CAN catch-up. My focus right now is on the barn, but my time is also getting short for getting the girls and Dingo on the stand for fall maintenance stuff. Dingo didn’t get fully shorn this spring thanks to being too big to get up on the stand, so I need to really spend some good time on him cleaning up his back end—after figuring out a different containment option…build a shorter stand? Build just a head-gate? I don’t know yet, but I have to come up with something soon! He’s not horrible, but he does use his weight to try to push me around, so he has to be held solidly enough for us both to be safe while I’m working on him.
Flashback pic of Dingo with his “skirt” on

I was doing so well getting him done, but after a while he got bored and started ramming the stand (I had him tied to it) and that wasn’t a good area to work on with sharp electric shears while he was moving, so I had to call it quits. Then the heat kicked in and that was the end of that 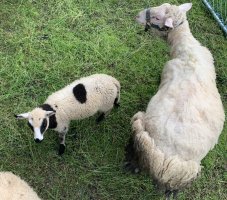 Maybe I should see if DH will flip him for me and hold him while I work?

Anyway. Girls are doing what is probably their last rotation in the front yard. I’m starting to worry again that I won’t have enough pasture to last another 2 months, but the young boys (except the tiny one for company for another few weeks) are supposed to be heading to freezer camp this week, so that’ll take some pressure off. 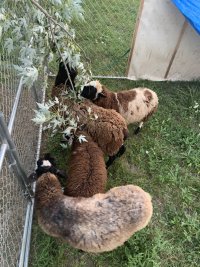 Did some tree trimming and gave the girls the branches to clean up. They loved it, of course! They’re doing so good! They all still pick on Doll a little, but she fits right in to the point it’s hard to tell her apart

Well, Kitty popped out another 5 kittens, I think. This time she had them in the cat house on the porch, so I found them first thing. Looks like three grey, a black, and another orange

Hopefully we manage to get her to the vet early enough this time! She wasn’t supposed to have these little ones, but by the time we could take her in, she was already pregnant 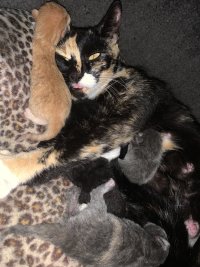 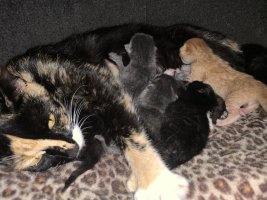 Val has an appointment today, so he hopefully won’t wander off and we’ll find the new batch homes once they’re old enough

Got some dyeing done finally. Was supposed to be red, but I obviously didn’t use enough dye powder lol
Shades of pink it is! A skein and a huge bag of wool all done together. 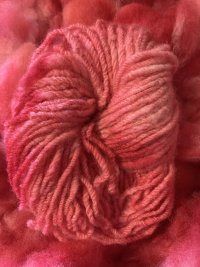 I’ve been picking through my washed wool fairly regularly, so I’m hoping to have more to dye soon. Now that I have a better idea of what I’m doing

I’m hoping I’ll get the colour I’m actually aiming for next time!

Apparently one of the areas in the back that I was moving the boys through was popular to bees, so DH and I both got stung. Him on the ankle, me on the edge of my palm. This was right after, so you can see the whitish area and where is started to get red. Evil stinging jerks 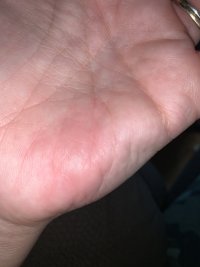 I heard a ruckus in the chicken coop and ran back there thinking something was messing with the chickens somehow. Instead I was greeted by my Ameraucana’s first double-yolker! Her normal egg and the doozy: 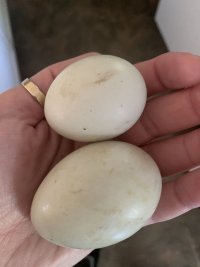 I definitely don’t blame her for making a fuss with that one!

I forgot to update that there are actually 6 kittens. 2 black, 3 grey, and an orange. Mama cat moved them from the cat house to a patch of lawn in front of the porch—not suitable at all! So I put them in the window well where she had her first batch. DH was supposed to put her in, but she scratched the bleep out of him, so I had to move the kittens and her. I didn’t get scratched

Apparently, mama cat has now invited Val to join them, so he was nursing this morning! I chased him off and moved the kittens to take up more space, but if she’s going to let him, he’s going to take advantage 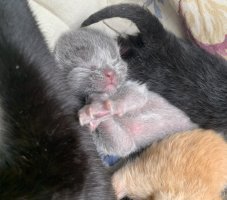 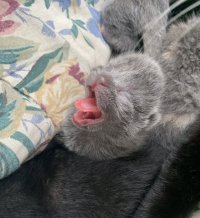 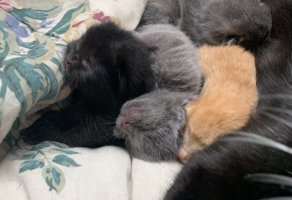 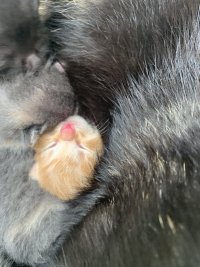 Bad Val, let your siblings (half-siblings anyway) have mama to themselves! 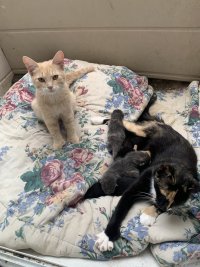 DH spent Saturday culling, so we’re down to just Coy’s ram lamb for company for Dingo until next month. 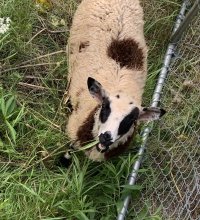 Not sure if he’s really worth sending to the freezer right now though lol. Below is a pic of him and Dingo in June and again on Saturday…and Coy’s little ram lamb is still teeny tiny

Other than his wool, I doubt Dingo has grown…and I don’t plan to winter the little guy. 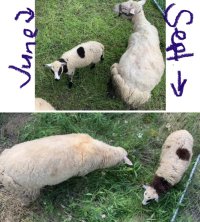 Yesterday I got more progress on the barn done as well as placing pallets on top of my hay under the tarp to help the rain run off instead of making puddles. Rain today and tomorrow will test it out and I can make any necessary adjustments.
I’m struggling to keep my mindset on doing one thing at a time instead of overwhelming myself with the huge number of projects that need done. I think I’ve got my priorities right, so it’s a matter of focusing on them and only worrying about other things if there’s time later.
F

I just opened up the BYH page and had 86 alerts... and bless your heart, you had most of them.. I have to give you a personal trophy !!!!! For being a glutton for punishment to be reading through my journal !

farmerjan said:
I just opened up the BYH page and had 86 alerts... and bless your heart, you had most of them.. I have to give you a personal trophy !!!!! For being a glutton for punishment to be reading through my journal !
Click to expand...

I’m working my way through, planning to read about 100 pages of it. I needed something farm to read and it’s a nice reminder of growing up with cows.
We had dairy cows and only about 30, but it’s still a reminder of good times. Our herd (Holsteins of course) was so great, I had a few favourites that would let me sit on them while they walked around or ate their hay and silage. I think I was around 10 when we had them and only for a few years, but it was as good as it was difficult—like most farming

Before downsizing to a smaller property and after I moved my horses away, my dad had a handful of beef cows for several years as well. I didn’t have a lot to do with them other than take care of them when my parents went on holidays, but I liked them.
My property isn’t suitable for them or I’d probably have just a family milk cow rather than the sheep

Now I’m all about the sheep though

Nice and cool today, so I naturally way overdid it. I’m so tired right now, it’s not even funny.
I’m down to one more big muck out that I finally got to about half done today. I got some more of the wire weaving done for the previous pheasant run. I spent a few hours working on building a second sheep stand. This one is a lot lower, so I’m hoping I can get Dingo on it. I’m also hoping it’s small enough to fit in the barn so I can keep it out back. No, I didn’t measure it first lol Just need to finish the stanchion and add a few finishing touches and I can find out if it works. Maybe tomorrow. And I got Foxy’s hooves trimmed and all that. She’s such a good girl and didn’t give me too much trouble.
Then some housework. All on top of regular chores and the dentist for a few little cavities. Phew

Best thing is that I made Shepherd’s pie with some lamb burger we got back from the butcher the other day. Yum!
A pretty mint flower 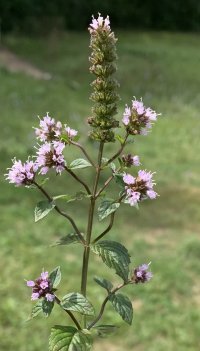 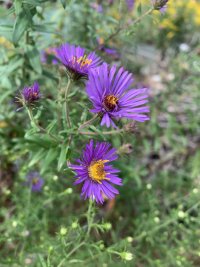 My girls gave me another double yolker the other day. They’re outdoing themselves. Probably in preparation to quit laying for the winter 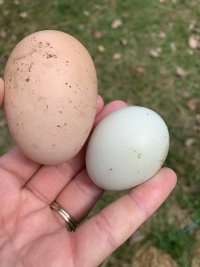