I haven't seen a double yolker for quite some time but that is OK, I fear for the girls pushing those out!

Sitting on the porch this afternoon, just lounging with DH while DS plays and I hear a strange plonk sound by my feet. I, of course, look over suspiciously at DH since the “projectile” came from that direction, but he’s actually innocent (for once

).
It was a frog. I’ve never seen one like this before! Probably because of the camouflage lol
Camo-frog — no the pic is not altered at all other than being cropped. 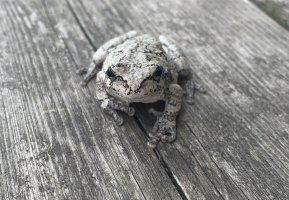 Dingo wanted a photo shoot and some loving today, so he got his wish…and a handful of grain lol 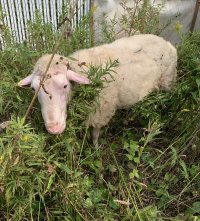 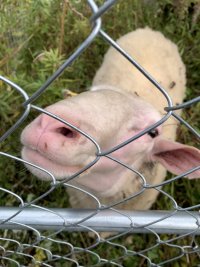 How are they even related??? Dingo is his DAD. A full 50% of his DNA. How do they look absolutely nothing alike? Nothing!

They would probably easily guess the 1/4 Jacob, maybe but not likely the 1/4 Calico. 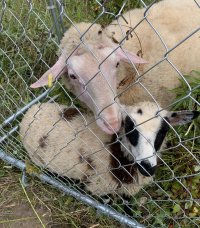 I think I’ve changed my mind and might winter Coy’s little ram lamb after all. He just is too tiny to process right now and he’s doing such a good job being Dingo’s companion…and I’m considering giving him the opportunity to breed Doll later on. It would certainly make for a very nice easy first lambing for her…I’m still thinking that part over, but it definitely has some potential. I can always give her to Dingo later in case the little guy isn’t up for the job. 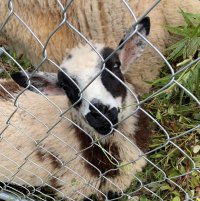 DH picked up the final piece I need for the new stand I built. A bolt to go through the arm of the stanchion that will move. I’ll probably grab one of the girls to test it out before trying to get Dingo on it. I did build a little step to go with it, just in case they need it. If not, well, I’ll find another use for it. I like to work sitting down (back and knee issues), so I’m sure it’ll come in handy.
The best part is the entire stand was built with stuff we already had (except the bolt lol). The plan is to use it for Dingo and also possibly as a milk stand that I can keep in the barn now that the entire barn is for the sheep.
I put Kit on the “usual” stand this evening and got her toes trimmed. Just Coy left for the breeding ewes. Dingo will be next, but not until I’m ready to (figure out how to) put the breeding harness on him. I’m going to have to work on Doll and Coy’s boy too, but no rush at all, which is nice.

I love reading about your sheep adventures. I've decided to build a wood stanchion for trimming feet. I have the expanded metal goat milking stanchion and the sheep don't like it. I'm watching how your new stanchion works for you!

Baymule said:
I love reading about your sheep adventures. I've decided to build a wood stanchion for trimming feet. I have the expanded metal goat milking stanchion and the sheep don't like it. I'm watching how your new stanchion works for you!
Click to expand...

Thanks @Baymule you’re the best

When it’s finally done and I’m ready to test it out, I’ll see if I can do a video on all the pieces and parts and post it here for you—for inspiration

Today and tomorrow are supposed to be hot, then the temps are supposed to drop! Still no frost warning, which is good for my plants, but it does mean that the mosquitoes will live to bite another day. Can’t wait for the bugs to all die!
I’ve been carefully checking Famancha on the girls since Doll arrived. Hers was perfect, but I know that the bugs she grew up with are probably different than what my gals grew up with, so thought I should keep an eye on them.
Sure enough, Kit’s score is quite low now compared to a week ago. Foxy and Coy are low, but not terrible, so all 4 got dosed with the garlic powder/blackstrap molasses recipe I wrote down ages ago that I think I got from @Mike CHS ’s journal.
Planning to repeat once a week until after a frost to be safe. Maybe one of you knows if I need to do it more often? With typical deworming, it’s 10 days between treatments and only 2 doses. Not sure if the homeopathic option needs to be significantly more intensive or if my plan will be sufficient…?

Somewhere in there, take fecal samples to the vet for analysis. FAMACHA can lie to you.

Vet’s coming out Monday, so we’ll get those fecals done. I want to make sure that if I need to use dewormer, that I can get it done before my girls get bred. I don’t like using dewormers—even the “safe” ones for pregnant animals. I don’t think it’ll be a problem, but, you know, better safe than sorry

Today I had a fun surprise! A flock of wild turkeys strolling through my backyard. Young ones from the look of them. 2 jakes, 5 jennys. I’ve heard them around when I had my own turkeys, so I wonder if my Tom gobbling kept them away? I’m not sure, but it was nice to see turkeys around again. 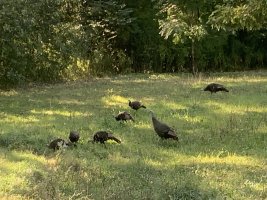 He buried his hand and thought it was hilarious. 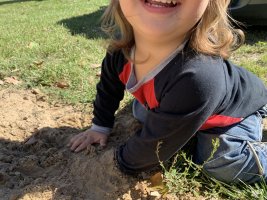 He also wanted me to take a picture of his boot print lol. I like his shadow over it 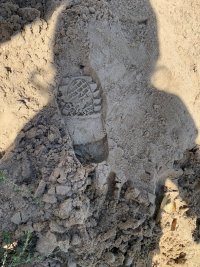 How cool to have wild turkeys in the yard!
Your boy is precious. He’s little only once. Savor every moment. He’ll be grown and gone and you’ll wonder where did time go.
You must log in or register to reply here.
Share:
Reddit Pinterest Tumblr WhatsApp Email Share Link