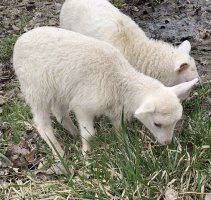 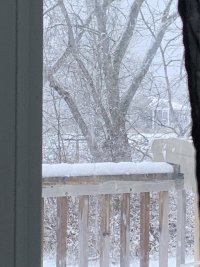 Crazy weather. That’s a lot of snow for the middle of April - even for Canada. So gross. Glad I have plenty of hay still. Looks like it’s going to be yet another week before the sheep can go out full time. Though I still have to figure out how I’m going to arrange them!

Kitty is due any day now. Waiting for her to disappear for a few days, then return skinny and starving! Then I’ll have to stalk her and find where she stashed them.
I once had a barn cat I tricked into showing me her kitten stash by mewling like a kitten in distress lol. Worked really well, actually. I’ll have to try it again if Kitty tries to be sneaky

I’ve had two cats in my life literally meow at my door in the middle of the night until I let them in so they could have their kittens in my room. One was a barn cat that had literally never been in the house before! That was kind of cool, actually. 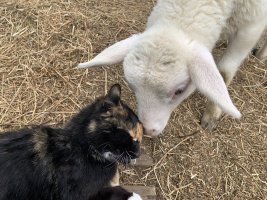 I told DH that I couldn’t decide which sheep I wanted to part with and couldn’t I just keep them all? And he said “do what you want.”
I was happy for a sec, then asked what would happen if I was sick or something and needed him to take care of them.
“May the odds be ever in their favour.”

I think that means I don’t get to keep them all. I don’t think they’d do that great as unsupervised free-range sheep

I should! But I also need to keep things at a manageable level for ME. So, I’ll keep evaluating the lambs and ewes until I have a better idea of who’s best for me to keep.
Temperament is a big one for me. I really don’t have the physical ability to wrangle big bully sheep like Woolfie. Even Kit can be a lot some days - wild child. She’s a bit easier since I can manhandle her based on her size, but it’s not fun. I struggle with Woolfie and could easily get hurt with her. If she wasn’t a bottle baby obsessed with food, she probably would be gone already.
Foxy and Coy are my best girls for being handled. Dingo’s actually pretty good too.

I will decide by 12 weeks and the girls that don’t suit will be going - regardless of the cute factor. I want eye candy, but I have to be practical. So far, Vulpix is taking after her mother and is very standoffish

I might have to change my mind and sell her

…I mean, she’s manageable, but she’s not friendly. Not. At. All. The lambs were all running around and she would either stop and change direction or make a huge swerve around me…any of the other lambs will come right up, ugh.

The oldest boys are going to have to be weaned in the next few weeks. I’m considering separating Woolfie’s boy during the day as well and milking her twice a day while he’s slowly weaned off.
He’s huge and doing very well. I was right about his temperament too. He’s already challenging me! 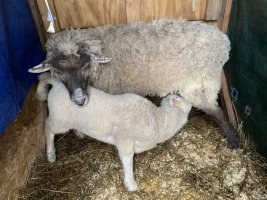 What’s hilarious is watching Foxy’s oldest triplet boy run around trying to breed everything in sight! He even does the tongue blubbery thing

I got a pic of the squat thing Coy’s girl does while I was scratching her chest. She’s a sweetheart. So is Foxy’s trip girl. Actually Foxy’s trip girl comes when I call her. Stupid white sheep being nicer than the colourful pretty ones 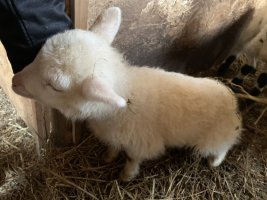 And you felt a need to share that with me overnight Monday????


SA Farm said:
Stupid white sheep being nicer than the colourful pretty ones
Click to expand...

I usually have gorgeous spotty BOYS and plain white GIRLS. The genetics for color are there, but the boys are grabbing them first.
I have a very friendly 1 1/2 month old ewe that follows me for scratches, chews my shoe strings, blue jeans, or shirt. She’s gone from friendly to pest, LOL. All white with a small patch of brown under one eye. 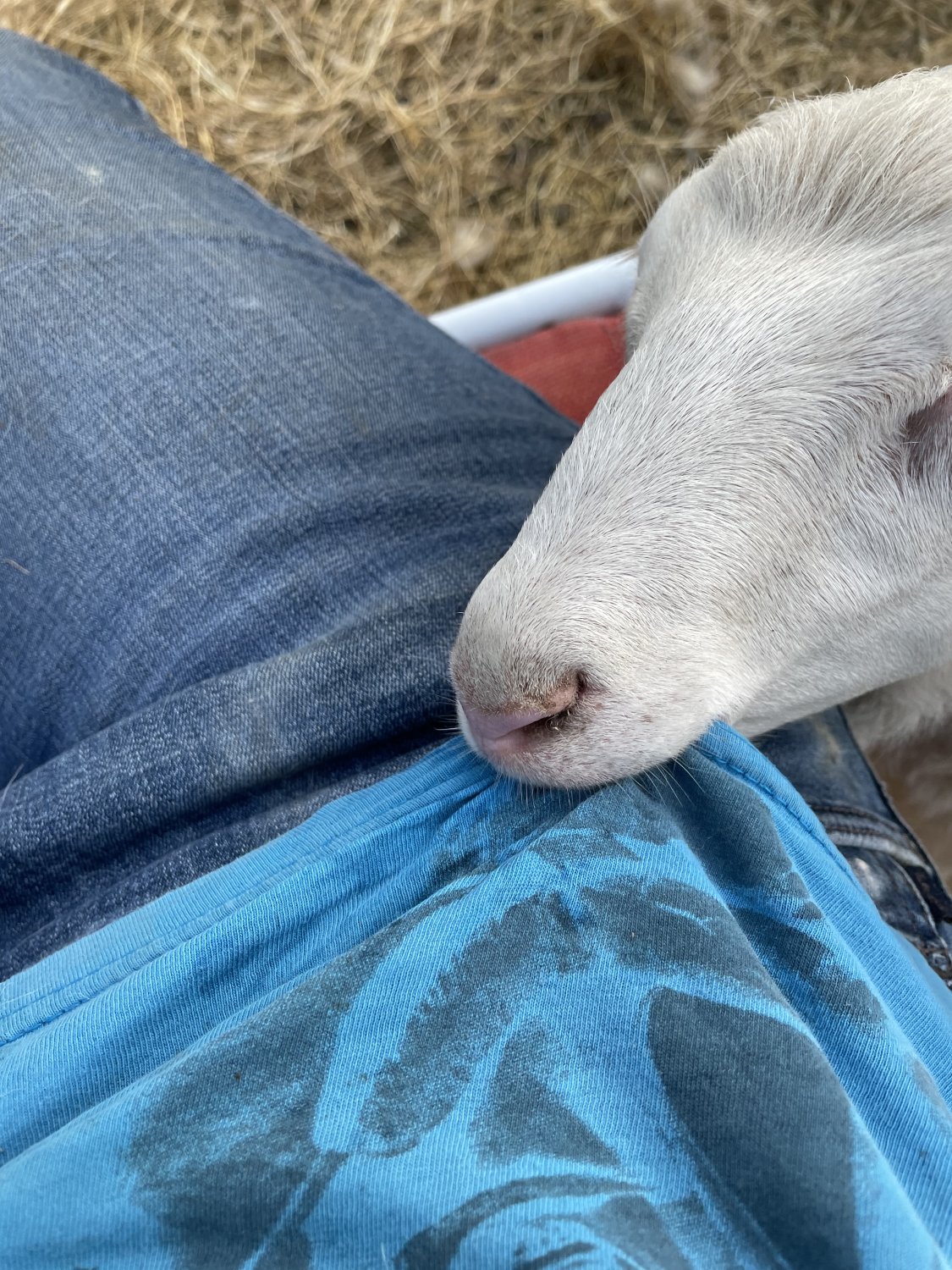 Alright, I think I have it sorted -or mostly sorted- out. I’m going to sell Kit, Woolfie, and their lambs. Keep Foxy’s rams to put in the freezer, keep her ewe lamb to be my future milking sheep (name TBD, but probably something fox-related…maybe Arctic? Lol). Keep Coy’s ram lamb to maybe breed Foxy’s ewe lamb, and he’ll probably end up in the freezer at some point.
Coy’s ewe lamb is the only question still…do I go down to 3 ewes or keep her to have 4? I’ll figure it out later. No rush on that, but I am leaning towards selling her at this point….might get a nice spotty one in a year or two that I’ll want
I have a bunch of other sheep stuff to figure out too. My actual pasture isn’t nearly big enough to sustain my flock, so they’re mostly going to end up rotating in the dog kennels again (which I don’t mind at all. Still haven’t gotten our lawnmower repaired - who needs a lawnmower when you have sheep?). Need to figure out how and when to wean and a lot of it depends on when/if Kit and/or Woolfie sell.
My brain hurts

Sooo many variables! I’m not going to list all the possibilities and give y’all headaches too.

Kitty had her kittens either late Tuesday or sometime on Wednesday since I found them that evening. Wasn’t hard since she had them in the basement window well.
5 little fluff-balls - 2 black and white, 2 peach fuzz, and 1 tabby with orange.

Through the window when I first discovered them: 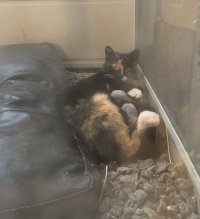 Opened the window and tucked a fluffy dog bed under so they weren’t on the stones anymore! 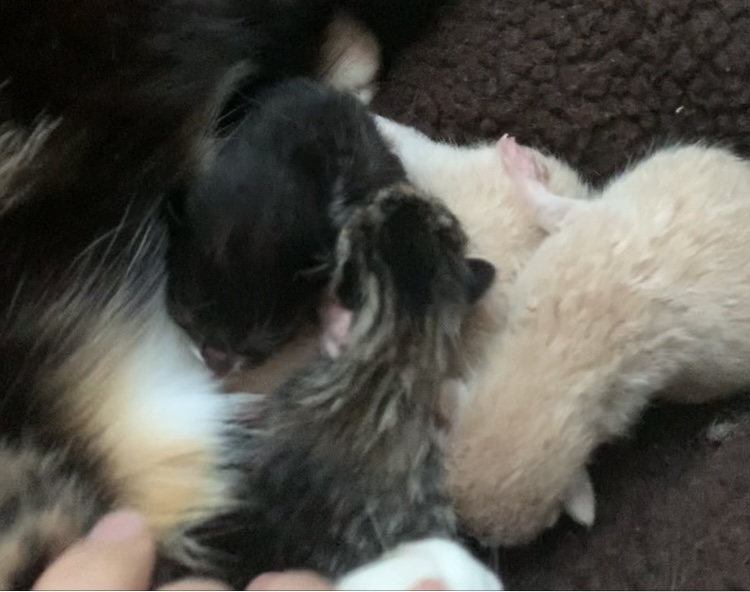 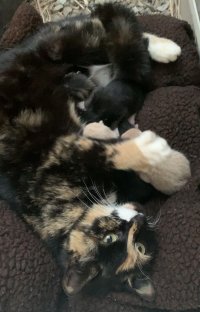 She hasn’t lost any condition either. I’m guessing it’s her daily intake of sheep milk.
She’s a good mama

Today the sheep had me totally annoyed. Mostly at Woolfie…shocker, I know! She decided the neighbouring yard looked much nicer than our yard, so she went walkabout and wouldn’t come back when I called her

Even the grain bucket wouldn’t entice her back, so DH picked up a fallen branch and herded her back.
DH and I both agree that if we can’t find a good home for Woolfie, we’ll keep her. She’s a giant jerk, but she’s a good giant jerk lol
We definitely agree that she’s too nice to eat, so we won’t be taking her to auction, either. Kit may go that route if I don’t find her a home in good time. I hope not, but don’t have as much of an attachment to her.

Got my shear blades ordered. Had to order another set of hand shears as well since I can’t find my other set for the life of me! I have to stop putting things in “safe” places.
It’s becoming more of a problem lately since I can’t use my normal spots thanks to DS! He’s very good at dragging chairs around to get to places he can’t reach on his own, so I have to be creative…something that doesn’t work well with my crappy memory!
I did find my staple gun and hanging scale though…okay, okay, DH found them, but I helped!

A box with a hasp and padlock for the sheep stuff... all in one place. No chance he can get into it... no having to remember where it is.... The other stuff.... a locked cabinet????

SA Farm said:
I did find my staple gun and hanging scale though…okay, okay, DH found them, but I helped!
Click to expand...

By saying "I don't remember" when he asked "Where did you last use them?"

Bruce said:
By saying "I don't remember" when he asked "Where did you last use them?"
Click to expand...