Luke was mine for 4 years. He came at a time in my life when I really longed for a good horse. I've had horses since I was a kid, except for a ten year stretch after I had started my business. Spare time was very seldom had then, so I sold the gelding I had and everything else horse related. Trailer, corrals, tack... everything. I didn't think it was fair to keep a horse that wasn't getting used.
I was memorizing all the horses on Craigs List, that was how I entertained myself in the evenings. I showed my husband Luke's ad and he asked if I wanted to go look at him. Naturally I brought him home. I owe my husband a lot for his enabling. (He's also the reason I have Syringa... another story)

I found a few pictures of my sweet old gelding to share, in memory of the good times he gave me. Thank you Luke for the unselfish friend you were.

Not long after I bought him.

Luke checking behind him for ninja moose. 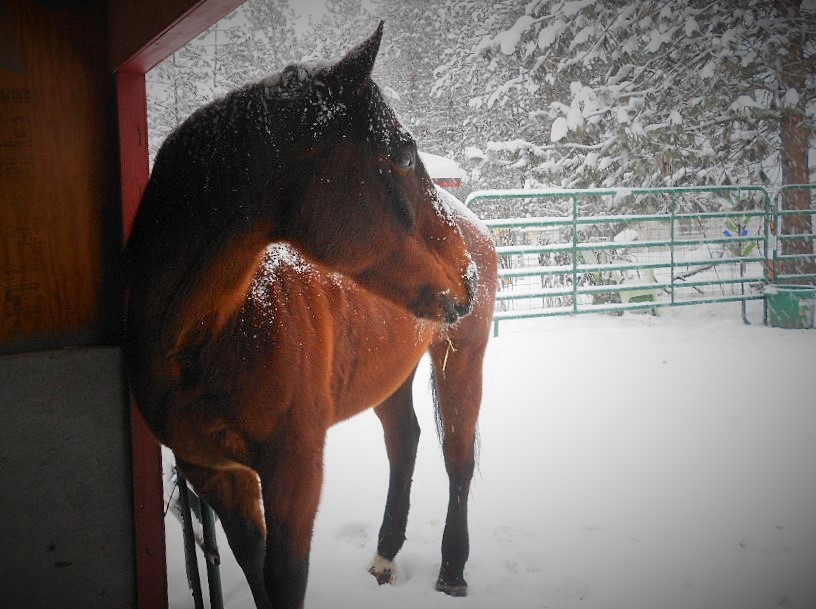 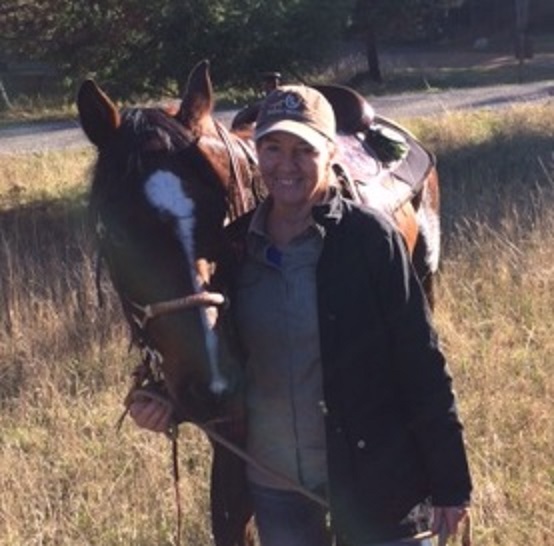 A great ride with friends on a brisk fall day. Luke and me on the right.
The horses were steaming from a gallop. 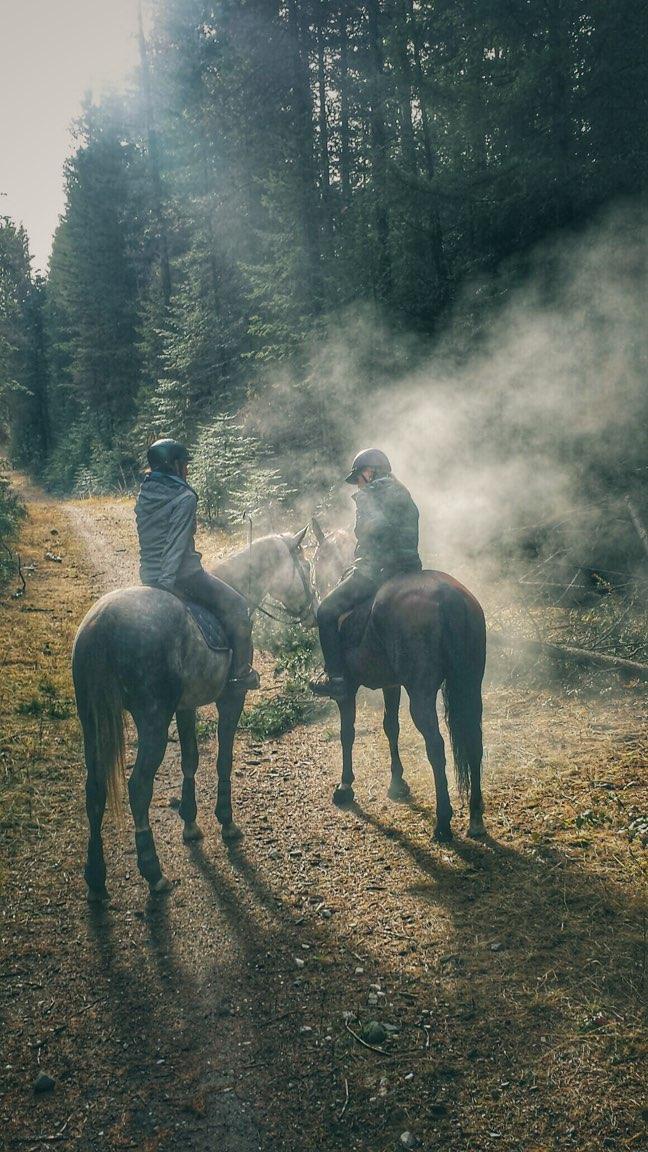 Lukes smoochy muzzle. I'm going to miss the feel of that on my face. 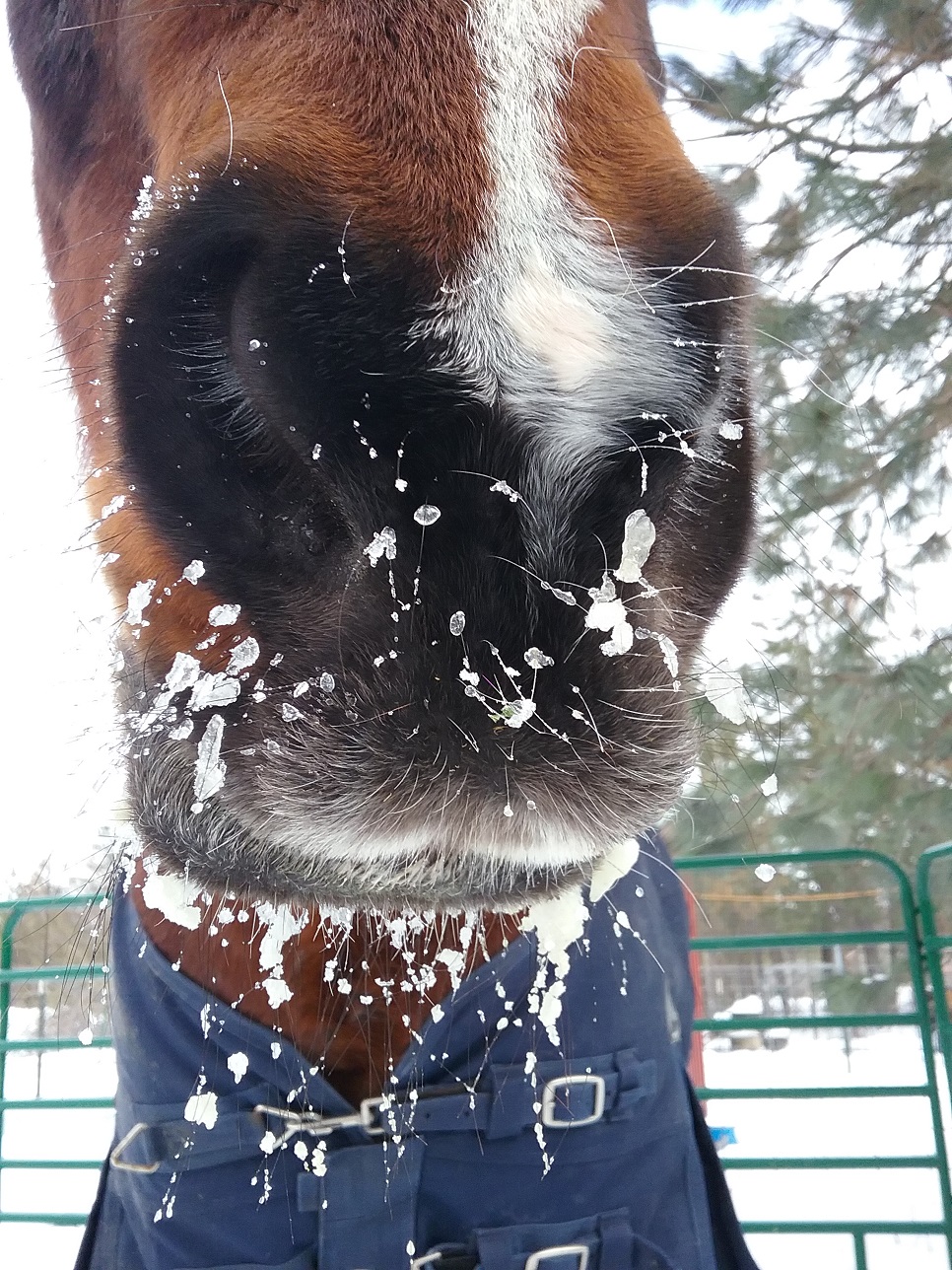 Maybe the Lord will keep you in His stable for me, waiting for a reunion.

Luke was a beautiful horse!!! That pic in the snow is one of the most beautiful horse pics I've seen on these forums. I'm so very sorry....I can't imagine losing a good horse I'd had that long. It's one thing when the horses are just pasture ornaments, but you had a working, playing relationship with Luke and that has got to leave a HUGE hole in your life.

I know you will miss Luke. He was your friend and buddy. Horses have so much to give, you were Blessed with Luke.
F

I feel for you as I know that it hurts. I got my mare at 1 1/2 yrs old when I was 14, from my 4-H leader. Black filly, sire was a trotter on the race circuit, dam was a quarter/arabian mix. She was the devil incarnate and my 4-H leader said if anyone could get through to her, I could. Aptly named "Satan"s Jinx" she and I went through our youth, teenage years and older age. Had her 27 years. Have had others here and there, but she was it. Used her for barrel racing, pole bending and gymkhana games in my 4-H days.... went through my marriage, my son, had a couple foals, was as steady as an old rocking horse with children on her but still could kick up her heels when we would go out and have a real ride....and retired to the farm with the cows. She died free and loved and I still miss her to this day. She has been gone for over 20 years.

So sad for your loss...I'm glad that you have so many good memories of him!

What beautiful pictures of him and the wonderful memories you have.

Have a great day.

We have been rearranging things on the property once again . Four years ago I downsized, sold the goats, and now keep fewer chickens. So that meant some pens came down, the chicken coop became my tack room and dh built a smaller coop for the handful of hens I now keep.
Then I got my mustang, which meant more corrals went back up, tack room got moved to a different spot, and Luke and Huckleberrys corrals got relocated and rearranged.
Now we have the two new metal buildings, Luke is gone (

) , Syringa has moved into Lukes corral and bigger shelter, her old shelter (originally the goat shed) is the new woodshed, and her corral and round pen panels are going to be set up for a bigger turnout area for her and Huck adjacent to their current location, south of the house.

I hope you're keeping up with all this.

Anyway, this will probably be the last rearrangement. Oh wait, the garden area will be in the old roundpen area next year (all day sun), and the current garden area may become a space for the dogs to be in when we aren't home, which is roomier than their dog run, it's out in front so they can see what's going on by the driveway, and is better than keeping them tied out. The problem with the current garden spot is the maple whips I planted along the driveway 15 years ago are now Very Large Trees. So too much shade in the garden and a lot of root competition. And dh doesn't want to cut them down .
Yes, I may have suggested it. Hey, building good garden soil takes a lot of time!

So there will eventually be some pics of the final arrangements here.

Meanwhile, here are some pictures of our fantastic new buildings.

Before the hay barn...
The corral panels next to the red shelter are down as of this last weekend,
the trailer attached to the tarped tractor is holding the treated wood for the base of the hay barn. Behind the tractor is the former chicken coop, now tack room. The CP arch over the little red hutch type object is the chicken coop/run, and the CP supports clematis and hops for shade in the summer.
Then the big tarped thing is my CP hay "tube".
The four posts in the foreground are the corner markers for the base 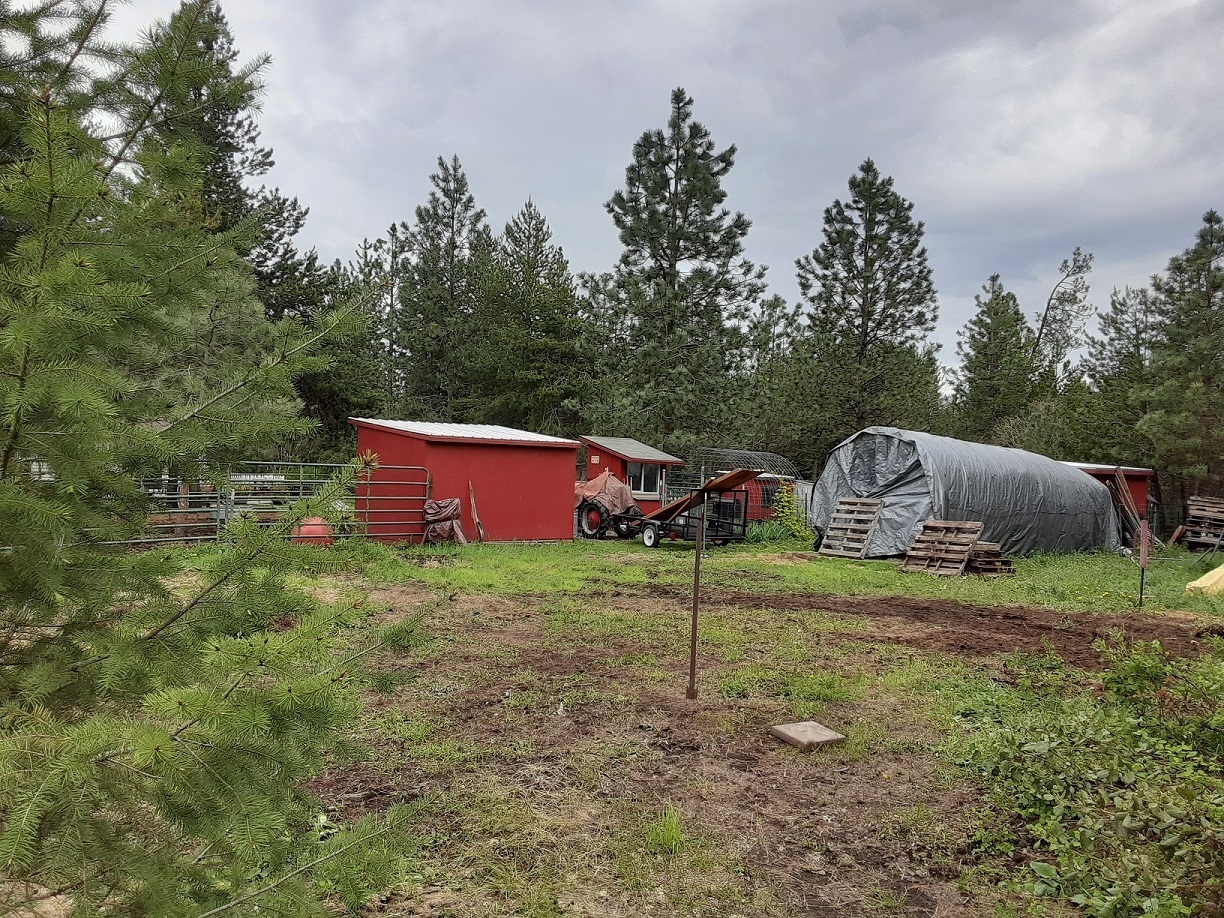 We moved the old hay into the hay barn this past weekend, and the tarps got pulled off the tube. Next weekend it will get dismantled and the panels will then get a new job as garden fence. My new hay will be delivered and STACKED in August, delivery and stacking will be about the same cost as a new hay tarp that the tube would have needed this year. I'm thrilled about that! The delivery and stacking is a gift to dh. He's allergic to grass hay and it just makes him miserable, plus we both get the hay lung dust cough for a week after. 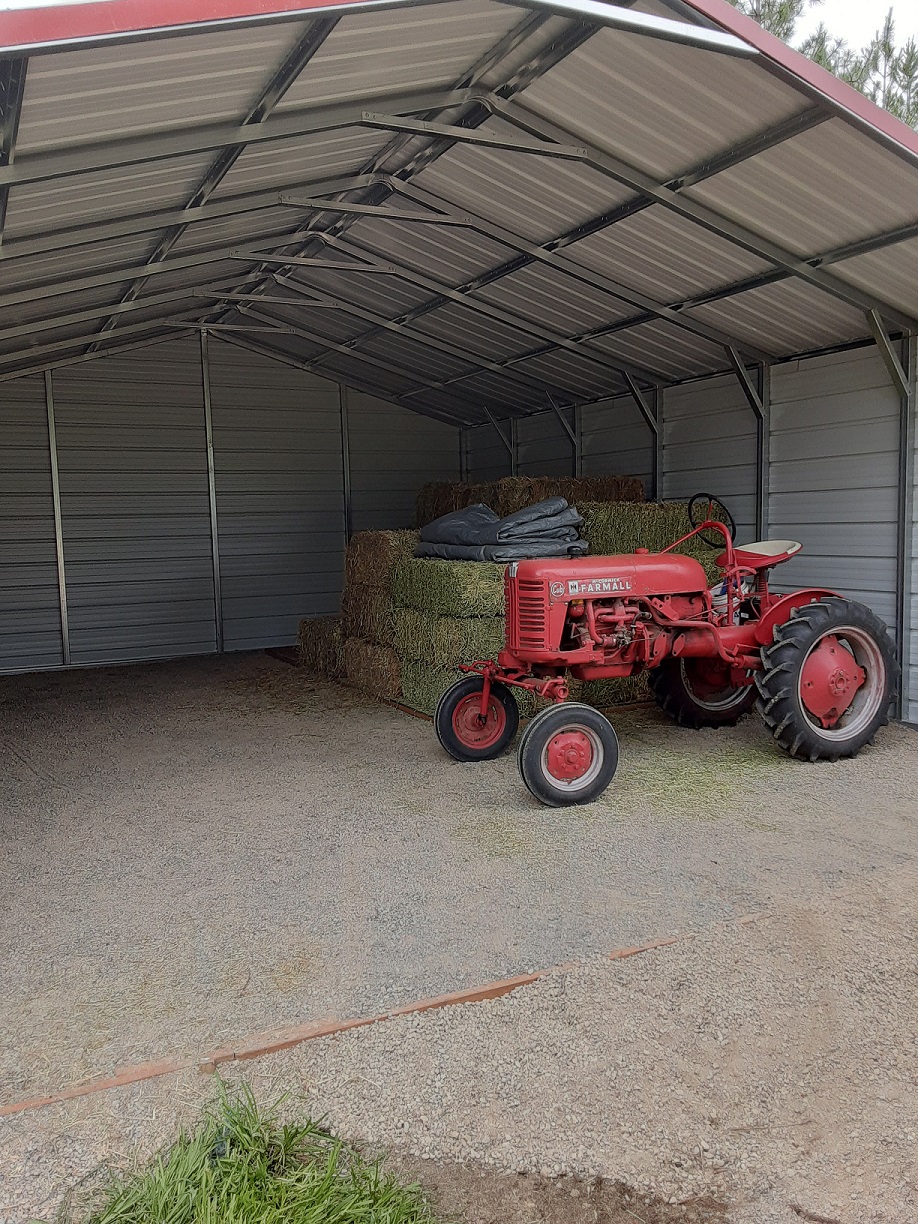 And my husbands new garage. The door was back ordered, but should be here soon. 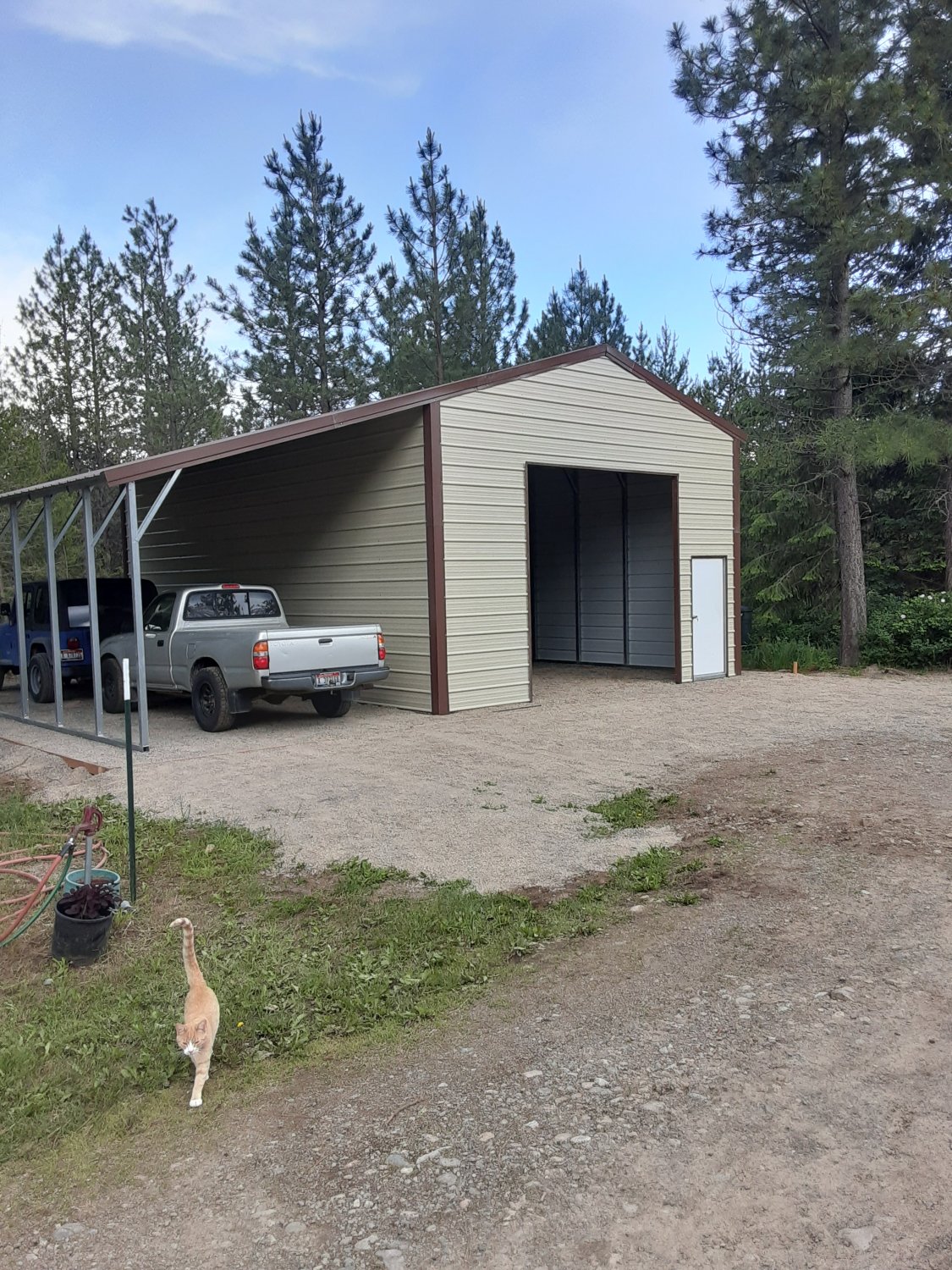 That has to make you folks happy!

Everything looks really Good!!....I keep thinking that I'm working on my last fencing "project", but for some reason or another I'm always doing another one, it seems....

.....sure hope ya have better luck with your "final arrangement" than I do....