thistlebloom said:
I'd love to! But probably not in the summer. What day did you say winter was?
Click to expand...

We are currently running a campaign on that, first results are in and one day in mid February is in the lead. Also expecting a surge of mail in ballots 3 days after the initial tabulation for a day in late January.......

Are these late ballots from validated live residents????

That reminded me of the last election when we were all in line and chatting. One of the guys said he saw a picture of a gravestone with an "I Voted" sticker on it and he didn't get it.

It was a Washington cemetery.

Todays agenda includes further sorting in my office. I did get it past the bomb went off looking stage, but it needs more hours of file sorting and stay or go decisions.
"File sorting" sounds like I actually have a system

. It's a loose system, which means important stuff goes in one of two file boxes. They start out with neatly labeled folders and everything behaving nicely, then degenerates into cracking the lid and pushing the important stuff in the general box it should go in.

I am also getting Thanksgiving dinner organized, making anything I can ahead and writing a time list of what happens in what order. Without that I'm easily distracted when the boys get here and we start talking.
I am blonde after all.

Last night as I was turning off lights and heading for bed Wren gave her moose alert bark. Three shrill yaps then silence as she disappears into her doghouse. I opened the back door and shined a flashlight and saw one of the yearlings heading toward the back of the house. She stopped when the light hit her and hesitated, I "shhhhished" loudly and she turned and trotted away then came back, making that soft moose sound "ma... ma..." disappearing behind the house. I looked out the front door and she had joined her sibling and Ma. What I saw was three fawn colored moose rumps in a row, with six glowing green eyes as they all looked back toward me. Comical.

They probably bedded down in our woods. This morning they were wandering around by the apple trees. Ma must have been back in the woods still because the two yearlings came galloping by and went around the back. I always miss the action shots!
Last edited: Nov 24, 2020

Thanksgiving was great with the boys here. I sent all the leftovers home with them, plus some extra pumpkin bread loaves I had made for them. I kept the turkey carcass and turned it into broth.

As we sat around talking I asked just what it was about playing games none of them liked. Kid #2 just sighed deeply, dh remained non committal, even though he has made it clear he can't be cajoled or threatened into game playing and Kid#1 said he liked playing games.
Kid#2 said, there ya go, play with him!

But he likes those cerebral strategy games which make my head hurt... no, those aren't the kinds of games I meant. I meant those games you don't need a brain to play, that rely on pure luck, hilarity and the possibility of cheating when no one is paying attention...
I had dreamed up a possible game for us based on charades. I thought we could all pick an example of a memorable incident one of us had starred in and act it out while the rest of us tried to guess who and what. I had the perfect one picked out, the time dh tried out his Jeep on stair climbing at the school the boys were taking martial arts classes. It involved a security guard...

Or the one when one of my children (best to remain anonymous) challenged me to a bike race, and when he pulled ahead decided to show off and steer with his feet. Had such a fat lip he couldn't eat properly for a week.

I didn't get any takers.

Talk turned to coffee drinking, Kid#1 was surprised to learn that his little brother doesn't drink coffee. Then he said there were a couple guys on his fire crew that were weirdos like that. He and I are the only caffeine addicts here, which then led to examples of bad decisions we had supposedly made that were likely due to the influence of supposedly over indulging in coffee. Haha. Non coffee drinkers aren't very funny.

So another traditional family Thanksgiving has been marked down in the calendar. Looking forward now to our next all family gathering on Christmas day.

Friday with friends. It's hunting season so we try to stick to forest roads and Syringa has a little goat bell on the cinch.
The mountains in the distance are in WA.

This is looking north. The snowy mountain in the far distance is the ski hill Kid#1 worked at for 10 years. This year he is just a season pass holder. 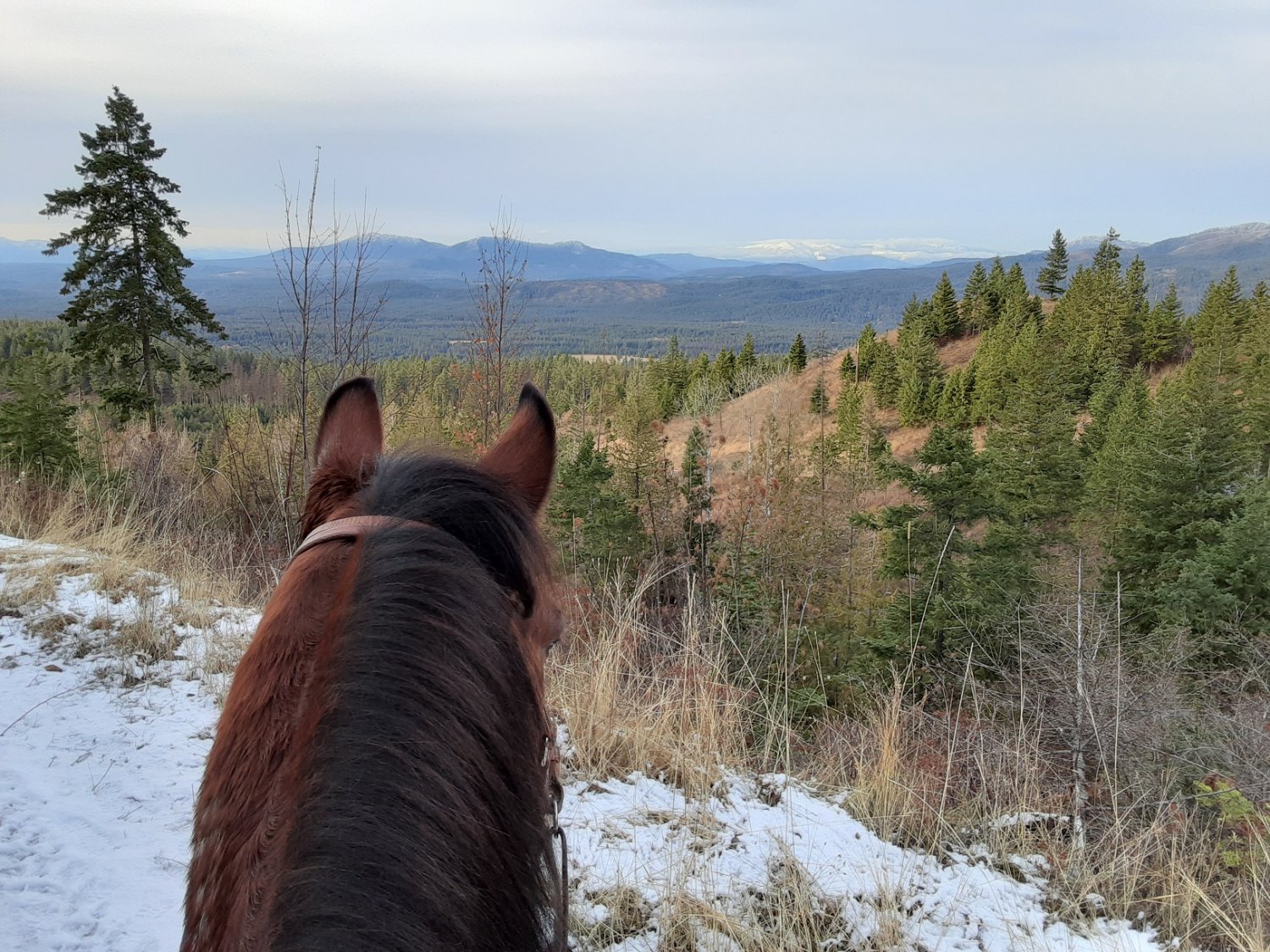 Right after this picture we were walking down the road and Syringa put her head down to the snow. She loves snow and will scoop it up in her mouth. I gave her enough rein to do that, she started walking slower and one of my friends said, Look out, I think she's going down!
Yes indeed. She had sweated up a bit from the climb and was itchy so that seemed like a good place for a roll. I kicked my feet out of the stirrups just as she hit the ground and climbed off. I'm not very nimble these days and my knees were stiff from cold, but I managed to get off without getting a leg pinned. I was actually more worried about her busting my saddle, but having a leg pinned was floating around somewhere in my head. Fortunately she didn't actually go over, I strongly encouraged her to get back on her feet before she could do any damage, lol. Silly horse.

No pics of Saturdays ride, but it was brilliant and cold, we were by ourselves and had a great time.

Sundays ride was another beautiful day. In the 30's but sunny. Lots of riders in the park, but we didn't meet anyone on the trails other than a couple of guys walking their dogs.
I like to take her off trail through the deadfalls. I love watching her pick her footing, she's very handy and smart about where she puts her feet. Off trail riding isn't exactly sanctioned by the rangers, so mums the word. 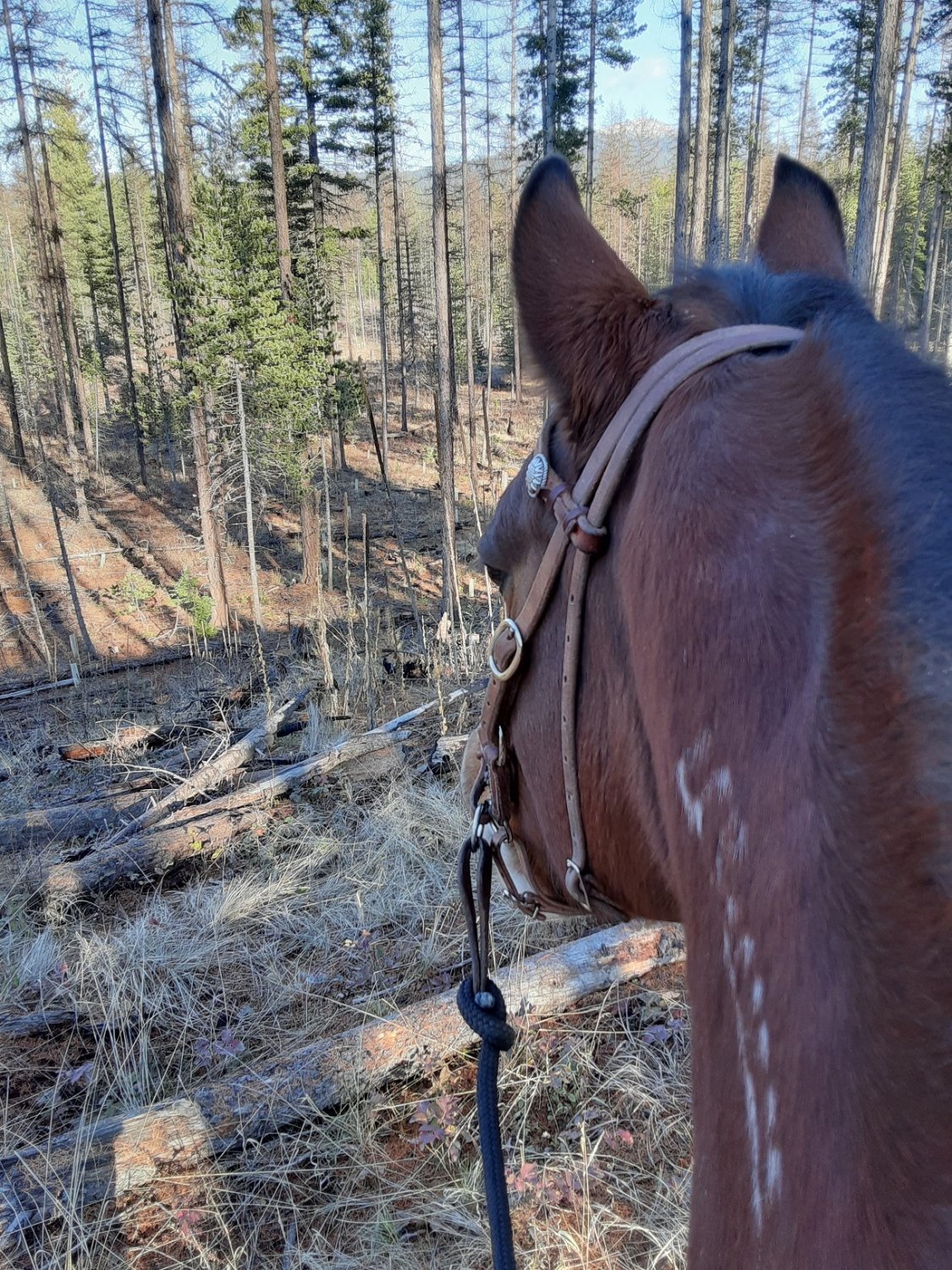 We had snow today. I switched it up to a bike ride with dh. It had actually stopped snowing and a check of the hourly forecast said no snow showers until late afternoon, so we loaded up and left. It stated snowing again as we pulled out. But it was fun, dh kept it short for me, so he wouldn't have to listen to me whine, haha.
The snow was wet so we got pretty soaked even though it wasn't a very long ride. I had two pairs of long johns under my bike pants so I was toasty.
I can't believe he wore shorts. We are complete thermal opposites. 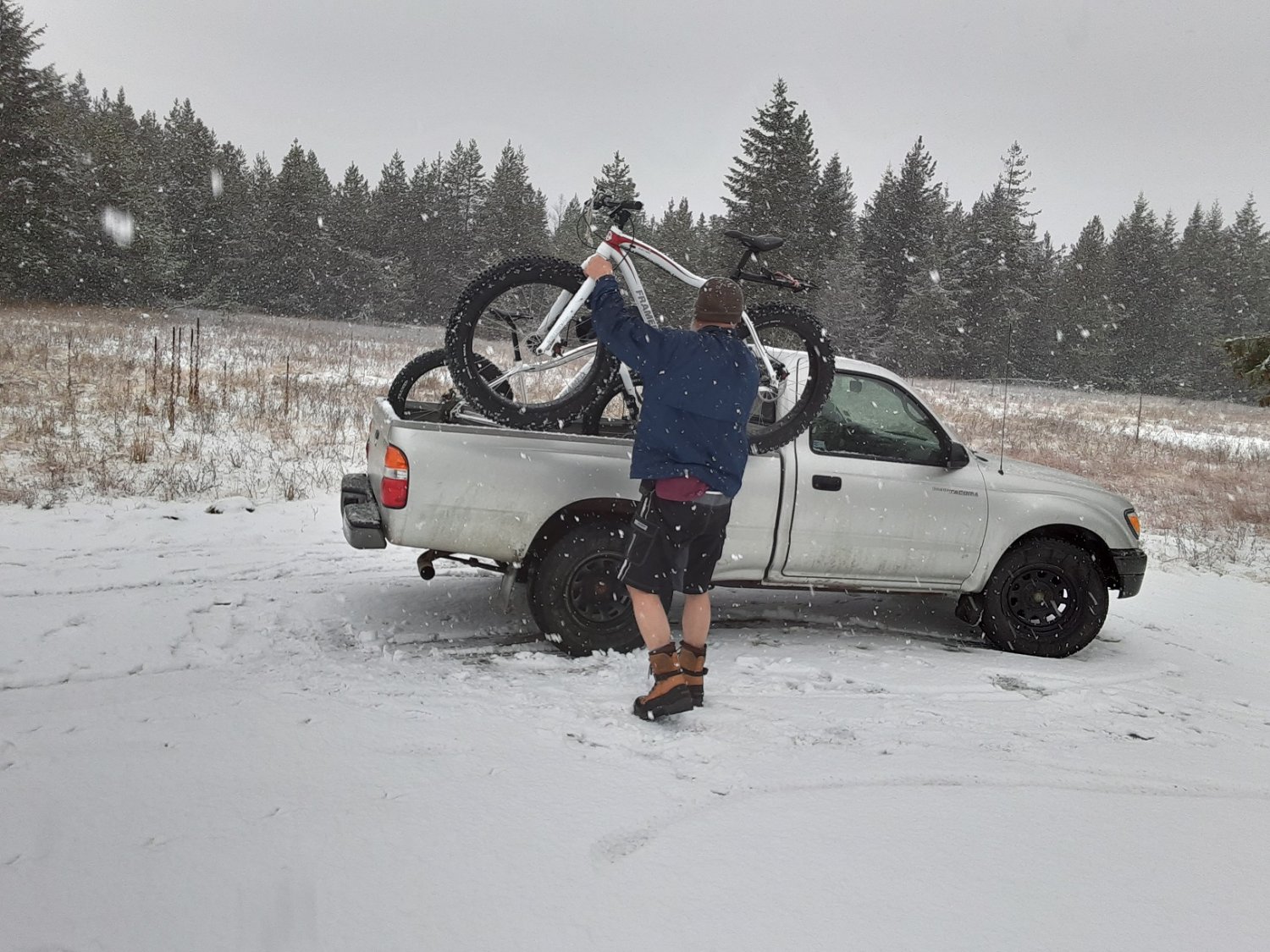 I love reading your riding adventures. Now that we have a nice base of snow up in my pasture I am going to be riding up there once Kupid has a fresh trim.
Your an inspiration to me!

SHORTS? In the SNOW? On a MOUNTAIN?

What's he got for blood? Antifreeze???

It cracks me up to see guys in shorts, and having a winter jacket on, gloves and hats. Yeah, so many of them have a different thermal metabolism.
You must log in or register to reply here.
Share:
Reddit Pinterest Tumblr WhatsApp Email Share Link