It's thundering and I see lightning!! I can hear sprinkling!! We have stuff outside that isn't supposed to get wet!!

Downpoured for a short while then stopped. Still thunder and lightning. Red flag weather warning. I hope this doesn't start more fires.

Careful putting tension on the welded wire, the welds will pop. And if you plan to use a string trimmer near it, be extra careful because the plastic string will rip the welds apart as well. Don't need to ask me how I know

Ground is still wet/damp looking. Dunno how much it rained. I actually bought a rain gauge but haven't installed it. D'oh! The outdoor thermometer shows 78 degrees. Clouds overhead so it may continue sprinkling. I really hope this rain happened over the fire areas too.

This morning we got going later than we'd planned, so I wasn't able to work in the front garden as it was too hot by the time we got home from errands. We bought more underlayment for the dining room floor, some sample tiles for the fireplace backsplash thing, new shelving for the spare room, and a decent little dresser for the baby room.

My mom came over to help around the house and then hubby's parent's and one set of grandparents came over to help as well. Hubby and his dad were able to get the dining room floor installed so now it looks fantastic. The moms and grandma helped sort the baby clothes and then fold and put them all away. We also assembled the stroller, the new shelves, and the baby bouncer thing. We did a lot!

Tomorrow I plan to finish getting the bassinet and baby zone in my bedroom done, and finalize both of our go bags. Little one has 4 possible outfits to wear home from the hospital. He's going to look cute no matter what.

The tiles for the fireplace zone are 4"*8" brick look tile. I was thinking just a brick layout, but hubby is thinking that's too boring, wants possibly herringbone. I think that will take a lot more work and tiles. I took a pic of the tiles, I think I can try to work some Microsoft paint magic and see if we can get an idea of what it would look like either way. Looks like the sample at the store is herringbone.

I put the sample tiles by the fireplace pedestal, and brick layout they would have two full rows and a cut row. The upper area we want roughly 4' high, so will probably end up with a cut row there too. Unless we go with the herringbone pattern, which will have lots of cut pieces. It's nice to think this project might actually get done sometime soon. There will be a border edging the backsplash and between the wall and the pedestal. We are also arguing whether to use the light or dark gray edge pieces. Hubby wants to use the same grout as we used for the hearthstones.

Finished cleaning out the master bedroom today, got a lot of stuff organized and filed. Hubby moved the big filing cabinet into the house and I was able to transfer everything from the little cabinet to the big one. There's still a big pile of random stuff I pulled out of the bedroom to go through and get organized, but I will work on that tomorrow.

We moved the bassinet into the master bedroom and I think there will be enough room for the rocking chair too. Now I just need to get the changing stations set up and I'll be ready for the munchkin. 24 days till due date.

I drew a picture! Lines are a little off and the bricks are not necessarily to scale, but I think it gets the idea across. 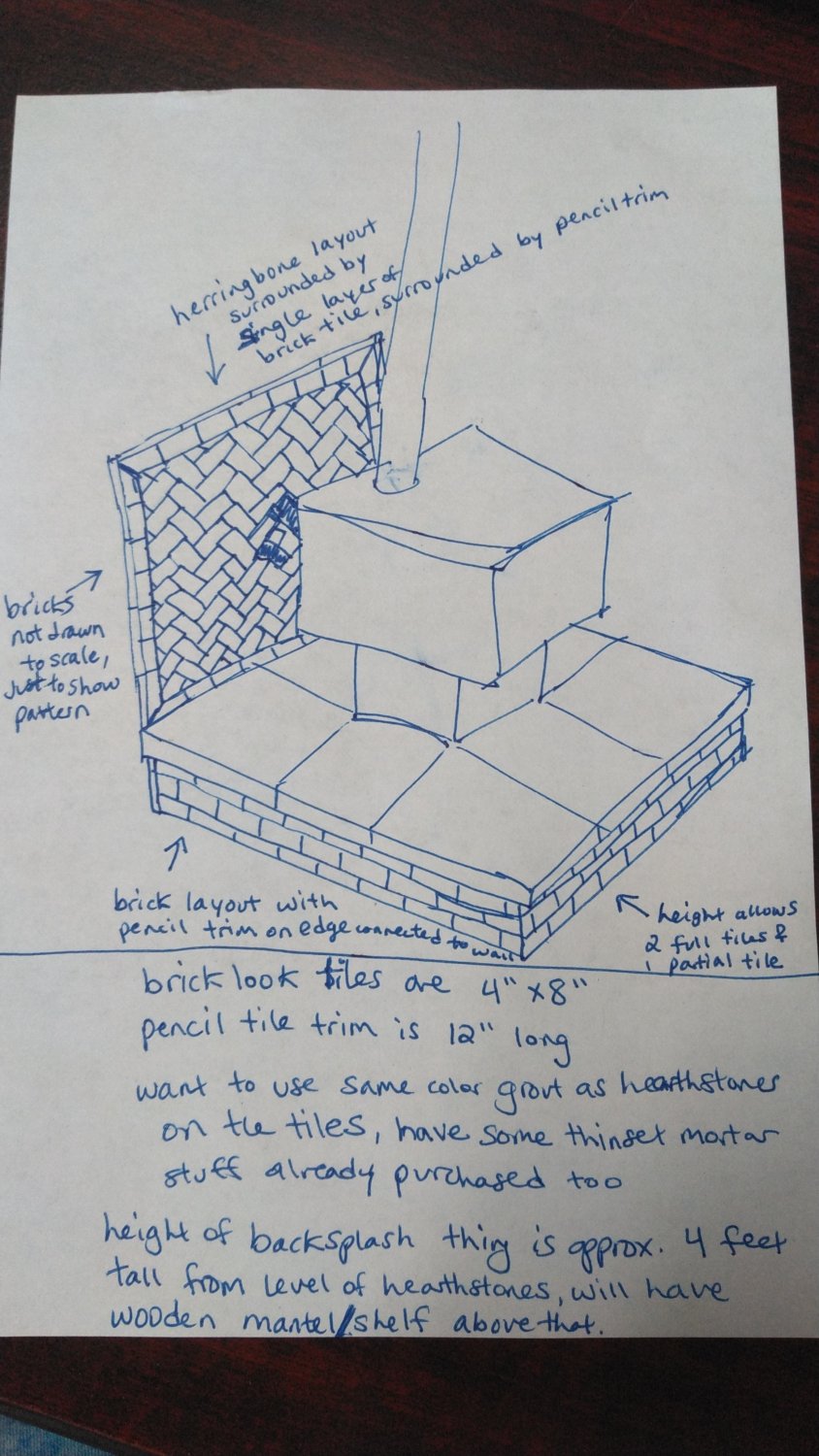 Next doctor appointment is finally scheduled. They were refusing to schedule me because I was "exposed" to someone who then came down with Covid. The "exposure" was on Aug 28, they did not have symptoms at that time, they developed symptoms during the next week and were tested and positive (entire household of 3) on Sep 4. One person had no symptoms beyond loss of taste/smell, other two were more sick but not needing hospital. There is no proof that they were positive at the time I was "exposed" to them. They could have gotten it afterwards, which in my mind is more likely as no one else who was also "exposed" to them at that time has gotten sick. If I had called to schedule the appointment on the Friday before they were tested and told everyone the results, the doctor's office would have scheduled me no problem.

On 9/7 I tried to schedule my week 36 appointment, which would have been over 14 days after the "exposure", but they refused to schedule anything. I had no symptoms. I still have no symptoms. After several days of phone tag and "I'll have to ask the doctor", they offered that if I took a test and was negative they'd schedule me. If it was positive, I would have to wait 10 days after the test before I could get an appointment. I took the dang test on Thursday 9/9 and was of course negative. They didn't call me back until this morning 9/13 to get me scheduled, for the END of the week, where I will be at 37 weeks. I understand that Covid is serious, and there are a lot of people sick with it right now, but I don't stop being pregnant just because I might have gotten exposed. This is my first baby, and he could come early, or might come late. Without a doctor visit to evaluate my physical condition, I have no way of knowing when to expect his arrival or if there are complications I need to be aware of.

I am at 36 weeks pregnant. I literally have no info on my baby right now other than the doctor is happy with my weight gain and the baby's heartbeat sounds good. I haven't been given an ultrasound since the 20 week one. I don't know how big he is. I don't know if he's in position. I am feeling very frustrated with the lack of communication. Next baby I'm definitely going to find a doula or midwife, and not have it at the hospital. I don't think Covid is going away any time soon and this is ridiculous. I'm also half expecting that they are going to refuse to allow my husband in with me due to "new restrictions", and I will end up having this baby alone, without an advocate to make sure I get the treatment and care I want.
You must log in or register to reply here.
Share:
Reddit Pinterest Tumblr WhatsApp Email Share Link